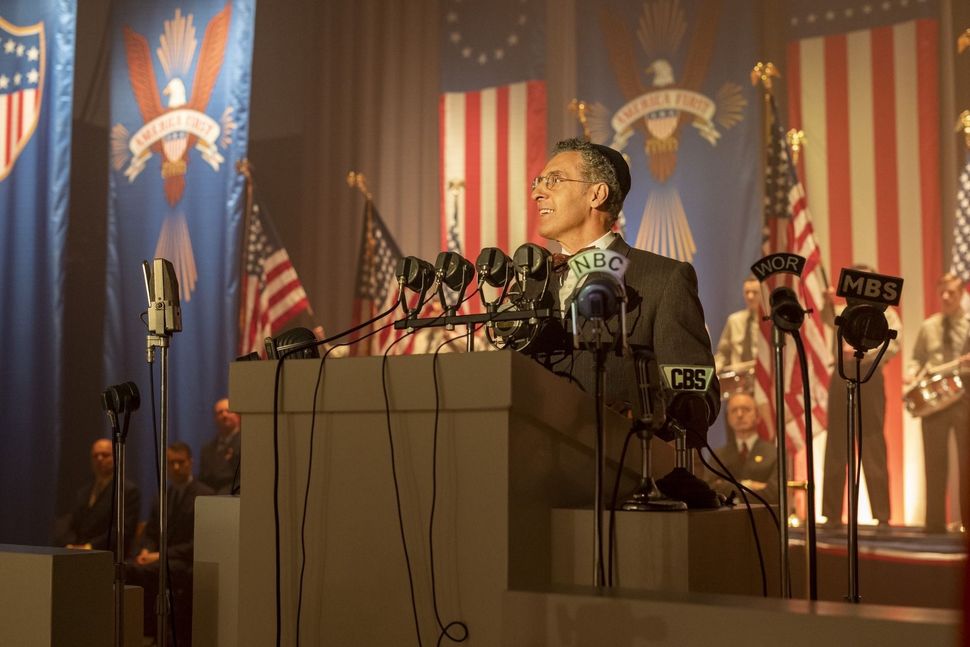 John Turturro as Rabbi Lionel Bengelsdorf in “The Plot Against America.” Visible is an eagle design on the America First banners that resembles the one on the backs of one dollar bills. Image by Courtesy of HBO, Photo by Michael K. Short

The story goes that Philip Roth was reading the autobiography of historian Arthur Schlesinger, when he stopped short.

”I came upon a sentence in which Schlesinger notes that there were some Republican isolationists who wanted to run Lindbergh for president in 1940,” Roth recalled in 2004. “That’s all there was, that one sentence with its reference to Lindbergh and to a fact about him I’d not known. It made me think, ‘What if they had?’”

That query launched a four-year project in speculative fiction: Roth’s novel “The Plot Against America,” which imagines the presidency of the renowned aviator Charles A. Lindbergh, who once accepted a medal from the Nazis and gave an ignominious speech about the “Jewish race” pushing America toward war with Germany.

In the first trailer for David Simon’s forthcoming television treatment of the novel, Lindbergh can be heard making that same speech.“He’s calling us war agitators,” says the character of beleaguered insurance salesman Herman Levin (Morgan Spector), as he listens in on the radio.

While the novel mostly tracks the childhood memories of the adult Philip Roth — the actual author in a fictionalized timeline — the show seems poised to follow the perspective of Roth’s parents, Herman and Bess (Zoe Kazan), and his older brother Sandy (Calib Malis), who are all given the surname “Levin” in the series. Scenes of Herman wiping swastika graffiti off Jewish tombstones and crossing paths with a cloaked Klansman hint that the family will weather extreme bigotry, while in the book they suffer strain through anti-Semitic government programs, but dodge the worst effects of a series of nationwide pogroms.

Central to the family’s upended lives are Philip’s vapid aunt Evelyn (Winona Ryder) and her husband, the South Carolina-born rabbi Lionel Bengelsdorf (John Turturro), who heads a department in the Lindbergh administration aimed at assimilating Jewish youth and families through relocation. A tense conversation between Herman and Bengelsdorf plays throughout the trailer, alongside shots of increasing violence. Because Roth’s novel plays out mostly through insidious — and ostensibly wholesome — anti-Semitic policies, it’s likely the show, by no less accomplished a master of social drama as Simon, is a lot more subtle than the trailer lets on. We’ll have to wait until March 16 to find out for sure.