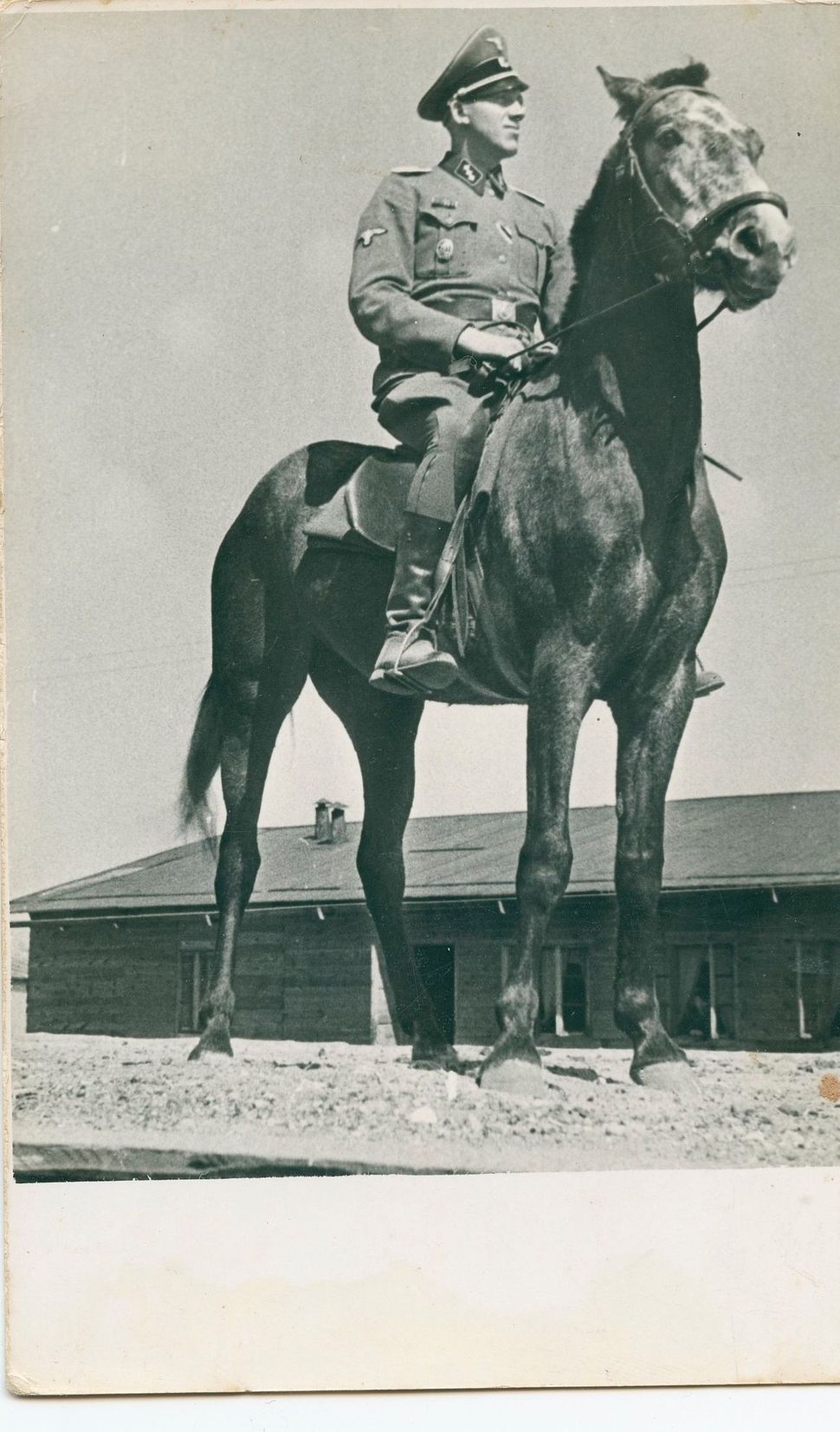 Johann Niemann posing on horseback on the arrival ramp at the Sobibor killing center, summer 1943. Image by Courtesy of the United States Holocaust Memorial Museum

The Nazis leveled the Sobibor death camp, located around 120 miles to the southeast of Warsaw, in 1943, after 600 prisoners killed a dozen members of the SS in an October uprising. The Reich ordered the camp closed down, and the surviving officers and auxiliary guards destroyed the evidence of the atrocities committed there since 1942.

On the way, they held a funeral for murdered assistant commandant Johann Niemann and sent photographs of the event, along with two photo albums of 361 photographs collected by Niemann, to his widow. 77 years later, those images, discovered in the Niemann family home in 2015, provide the most comprehensive visual evidence of the camp and its operations. 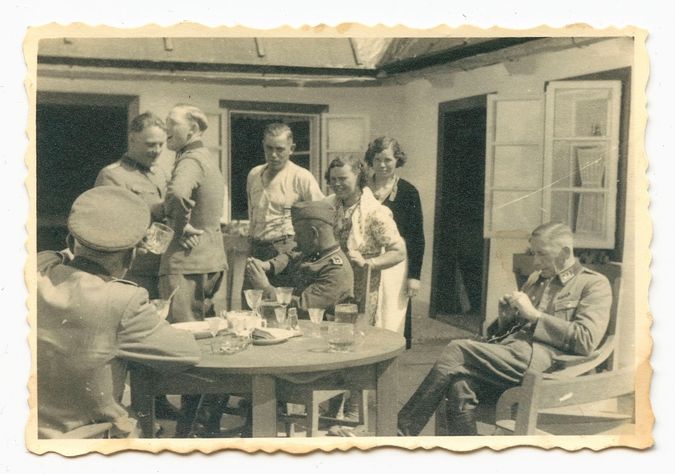 SS personnel relax on the patio of the officers’ dining room at Sobibor (known as the “Kasino”), 1943. Image by Courtesy of the United States Holocaust Memorial Museum

“Until now there were only two known photos of the Sobibor killing center during its time in operation, and those were pretty much closeups of people, of SS personnel there,” said Edna Friedberg, a historian at the United States Holocaust Memorial Museum. The museum received the photos from the Stanislaw Hantz Educational Center in Germany, which made the photos public on January 28. “We did not have anything to show us what it looked like, and what’s so gratifying and so incredible about this new material is it simply corroborates every other account that we’ve had.”

Of the 361 photos, 62 images are from Sobibor. They’re primarily notable for what they don’t show. They document auxiliary guards and SS officers cavorting with local civilian women, drinking, listening to music and playing with piglets whose pens, Friedberg said, were cleaner than the prisoners’ quarters. Absent are many of the details survivors recalled in testimony: the gas chambers, the warehouses of clothes belonging to the deceased and the pit over which prisoners were shot.

The guards “were having fun, and they were purposely having fun as part of the torture,” said Richard Rashke, author of “Escape from Sobibor” and “Useful Enemies: America’s Open-Door Policy for Nazi War Criminals.” “They would sometimes, with their drinks in hand, force Jews to do dances and they would laugh and clap.” 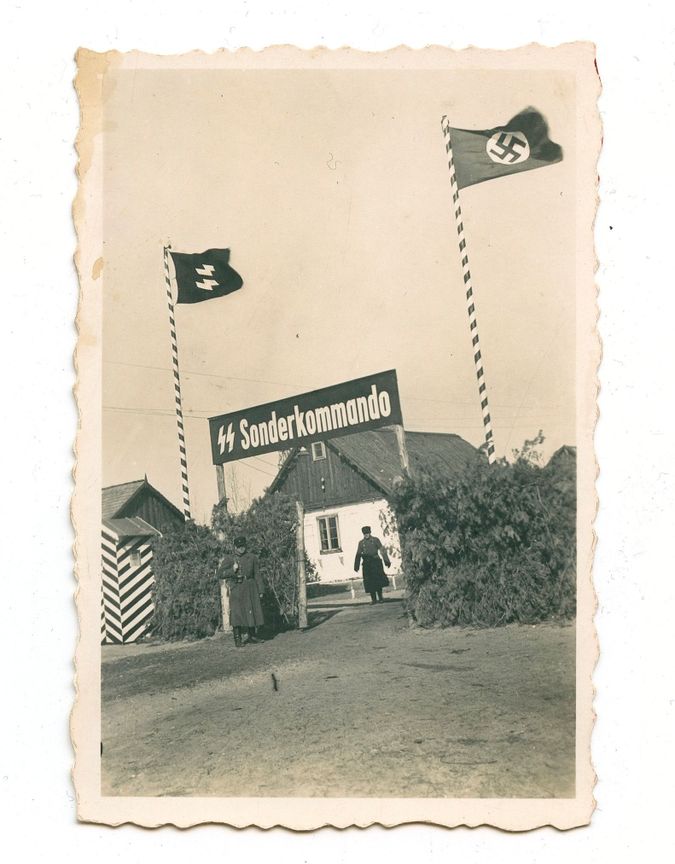 Gate of the Sobibor killing center, 1942-43. Transports of Jews entered the camp through this gate. The gate was covered with tree branches in order to camouflage the killing that occurred there. Image by Courtesy of the United States Holocaust Memorial Museum

The photos also suggest the lengths to which the Nazis went to obscure the conditions of Sobibor, where an estimated 170,000 people were killed. They show the camp’s camouflaged entrance, which was hedged in by tree branches, and aesthetic touches added to the guards’ barracks, like shutters and flower boxes on windows.

But the collection’s most interesting feature may be the photos showing the camp’s non-German guards, who, Friedberg said, performed much of the work at Sobibor. Pulled from the ranks of the Trawniki SS training camp, and primarily Soviet prisoners of war — often Ukrainian and Lithuanian — the guardsmen are, in one photo, shown enjoying a field trip to Berlin for performing well at the camp.

“We see members of the Trawniki strolling around Berlin with high brass from Hitler’s chancellery, looking very casual, with hands in their pockets, smoking a cigarette,” Friedberg said. “The body language speaks volumes of the complicity of these men and also the degree to which they were deeply integrated into the Nazi personnel.” 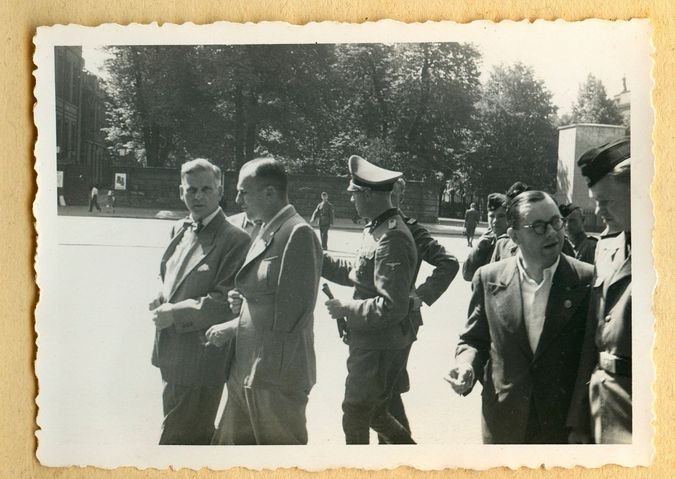 Staff of the Sobibor killing center on a field trip to Berlin. This photo shows Sobibor personnel with officials of the Führer chancellery. Johann Niemann is center. Image by Courtesy of the United States Holocaust Memorial Museum

Historians suspect that among the non-German auxiliaries photographed is John Demjanjuk, an accused war criminal who was the subject of a 1988 Israeli trial, where he was identified as the infamous Treblinka guard Ivan the Terrible. (His conviction was later overturned on questions of reasonable doubt). Demjanjuk was extradited to Germany in 2009 for his alleged involvement in the crimes at Sobibor. He died in 2012, while his conviction for the murder of 28,000 Jews at Sobibor was being appealed.

The photos in Niemann’s collection also provide context for the October 14 uprising that claimed his life.

“Niemann was very important during the uprising, because the planners of the uprising made sure that the main commandant and the main, very, very nasty guard, was not there,” said Rashke. “They planned it that way.” Friedberg reports that the assistant commandant was considered “easier to trick” and “less alert” than his colleagues. 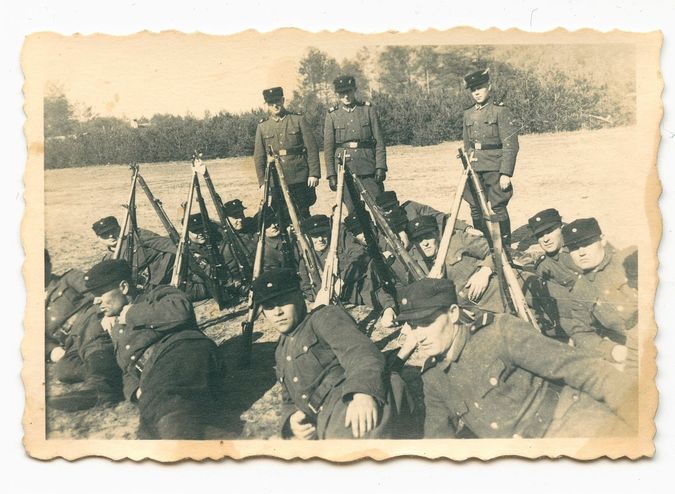 But, Friedberg said, “this collection is about so much more than Sobibor. It sheds light on the implementation of the final solution writ large.” She noted, particularly, how many of the 361-image albums precede Sobibor. Niemann, she said, is “a man who comes from a very modest background, maybe not even fully literate, working his way from so-called ‘Euthanasia facilities’ to a position working with gassing at the Belzec killing center until he’s finally pretty high up at Sobibor as deputy commandant. And his photo albums show his sense of self and his ego inflating over the years and his rise.”

“This guy Johann Niemann… was having fun taking pictures of his work site so he could go home and show his wife and kids ‘This is what I do for a living — I kill Jews,’” Rashke said.

Niemann’s interest in documenting his experiences during the Shoah may not have been aberrant. “We can only assume, because we have one other similar album from Auschwitz in the museum’s holdings, that this was not an unusual activity, to have a souvenir album — or in this case albums — of a memorable chapter in the life of a person, but that many families got rid of it later,” Friedberg said.

The murder of Niemann and his fellow SS guards resulted in a brutal retaliation against the remaining prisoners of the camp; those who had not escaped during the uprising were killed. But it also might have ensured the survival of some record of the camp’s atrocities, and the blasé attitude of those that enacted them. “Because he was dead there was no risk of him being prosecuted for crimes after the war,” Friedberg said. “His family had no incentive to destroy this material.”

Correction February 2, 2020, 10:016 AM: A previous version of this article stated that John Demjanjuk was convicted of being Ivan the Terrible, an Auschwitz guard. In fact, Ivan the Terrible was a guard at Treblinka.