The secret Jewish history of Leap Year (and Leap Shabbat too) 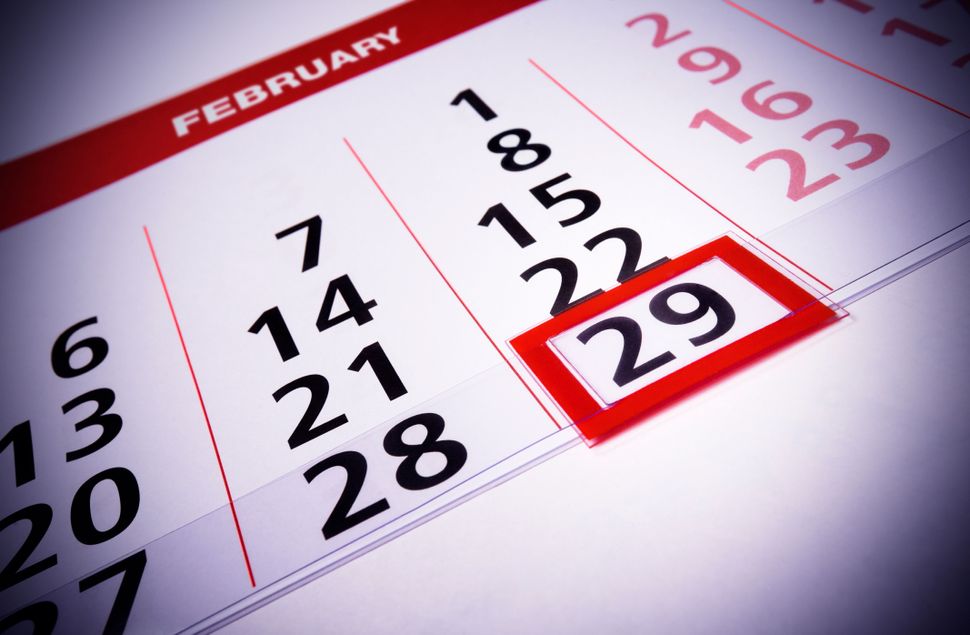 For only the ninth time since Americans threw off the yoke of British oppression, Jews across the continent will be celebrating Shabbat on a leap day. Saturday, February 29, 2020 will be the first Leap Shabbat since President George H. W. Bush was in office, since Mark Rypien led the Washington Redskins to Super Bowl triumph and since “My Cousin Vinny” was released.

While Leap Shabbat has little Jewish ritual significance, there is something particularly fitting about reading the portion, Terumah on Leap Day. February 29 is a day appended to the calendar to make the calendar whole and accurate, to make a man-made artefact fit the natural world. The portion, likewise, describes how human manufacture can be married to something larger — the physical construction of the Ark of the Covenant, its trappings, surroundings and decorations.

The long journey leading to the addition of the Leap Day (added on February 29 every four years, but not on the century years, but actually yes on century years if they are divisible by 400) began with Julius Caesar’s introduction of the Julian calendar in 46 BCE, after his sojourn in Egypt showed him that the previous calendar was no longer working. The Egyptians had worked out that the Nile flooded to the same level every day on the same year, so they could correct their calendar regularly. Armed with this insight — and inspired by the memory of a young Cleopatra — Julius established a Roman calendar that was in use throughout the West until 1582. By anyone’s calendar, a 1600 year run is not too shabby.

By the mid sixteenth century, though, it was becoming obvious that the calendar had slipped. The seasons were off, and, most important to Pope Gregory, Easter was being celebrated at the wrong time. That was obvious partly because of the bunnies arriving early and partly due to the divergence of Easter and Passover. Because, while the Julian calendar had been slipping, the Hebrew calendar with its additional month seven times every 19 years and occasional extra days on the end of the months of Kislev or Cheshvan, had been keeping better time

So, in 1582 for most of Christendom — and in 1752 for the British Empire, including what would become the United States of America — the Gregorian calendar replaced the Julian, skipping 10 days. It didn’t change in Russia until Lenin changed it, (hence discrepant dates for the 1917 revolutions depending on where you read them), and it didn’t change in the Orthodox church until later still, or in some parts of the church, not at all. Because the Anglophone world made their adjustment 170 years later, they had to skip 11 days, leading to the name “leap” and to social unrest by folks who thought they were losing 11 days of their life.

Still, the blithely uncaring Hebrew calendar, plods ever on, unaffected except in one small liturgical matter. An ancient talmudic dispute about when in the year to start saying the prayer for “Dew and Rain” (Tal u’Matar) was decided by the Babylonian sage Hananiah. He said that the prayer should be recited starting on “the sixtieth day from the [autumnal] equinox.” There are many complications to the reasoning, the acceptance and the implementation of that ruling, but the upshot is that we do in fact start saying that prayer sixty days after the autumnal equinox, — according to the Julian calendar! So prayer books have an early December date, rather than the late November one you would expect.

Of course, irrespective of any Gregorian oddities, the young men and women reading the Torah for their b’nei mitzvot on Saturday will be able to read Terumah on Adar 4 (February 21) in 2026 or on corresponding Saturdays in the subsequent years. Sadly, however, they won’t be able to read Torah on their secular anniversary until 2048. And even then, that won’t be the same portion, but rather will be the following portion, Tetzaveh. Even if they hold out until February 29, 2076 — probably the final leap shabbat of their lifetimes — they won’t get to read Terumah, but rather Vayakhel.

Correction, February 28, 2:25 pm: A previous version of this article suggested that Leap Day was introduced in the Julian calendar, when it in fact debuted with the Gregorian calendar; it also suggested that the Gregorian calendar instituted an 11-day leap, when the 1582 implementation involved a 10-day leap, and the 1752 version required an 11-day leap. Last, Chesvan isn’t the only month in the Hebrew calendar with occasional extra days; Kislev has the same feature.

The secret Jewish history of Leap Year (and Leap Shabbat too)