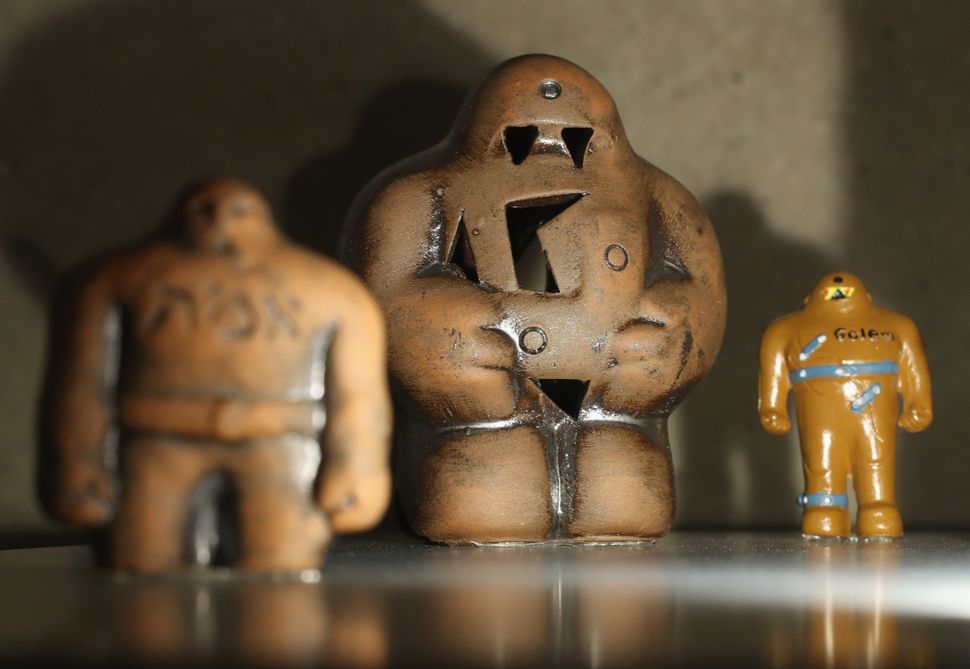 Golem souvenirs from the Jewish Museum in Berlin. Image by Getty/Sean Gallup/Staff

By now, we’ve all heard what we need to do to help combat the novel coronavirus outbreak: Practice rigorous social distancing to flatten the curve, sing “Happy Birthday” twice while washing our hands, avoid all face-touching.

But the 2018 horror film “The Golem,” directed by brothers Doron and Yoav Paz, presents another alternative to the ravages of a plague: Jewish mysticism. Spoilers — it goes badly.

The film’s protagonist is Hanna (Hani Furstenberg), a 17th-century Jewish woman married to her shtetl’s rabbi’s son. She’s been privately practicing birth control since her son, Joseph, drowned seven years before, unable to bear the thought of losing another child.

She’s also a secret kabbalist, an interest that’s verboten for women. When a group of non-Jews suffering from an unspecified disease and wearing aquiline plague masks enter her village, blaming the Jews for the epidemic facing their people and shooting a member of a wedding party, she becomes convinced the only way to rid their town of the pestilence-bearing intruders is to create a golem to combat them.

“You propose to create a golem when you can’t even give my son a child?” the rabbi objects.

Well, yes — and that’s just what she does. It’s not a good solution.

See, the viewer knows what Hanna doesn’t: Golems can turn, as shown in a prologue in which the famed earthenware enforcer crafted by the Maharal of Prague telekinetically kills his creator. In blissful ignorance, Hanna is hopeful when the golem seems to fix not just her town’s problems, but also, as it resembles to her deceased son, her personal crisis. This golem is not a hulking mass of earth like the Maharal’s, but rather, an elementary-school aged kid (Kirill Cernyakov) whom she dresses in a sackcloth and uses as an ill-advised outlet for her grief.

That bond soon turns dangerous. The golem becomes a slave to his maker’s passions. He senses her angers and jealousies, and, as a consequence, does damage to people that may not deserve it. Also, for some reason, when he gets hurt, she feels the pain herself — perhaps an overwrought metaphor for being a parent and losing a child.

Golem movies are nothing new. The first few were silent German productions by Paul Wegener that featured a clay giant with Prince Valiant hair. All but one, the 1920 origin story “The Golem: How He Came Into the World,” have been lost to history. The sound era brought a French/Czech remake of the original Wegener film, a 1970s-era Polish take on the myth and even a little-remarked TV treatment in 2000. But the Paz brothers’ tone-deaf contribution — it’s Hanna’s latent “motherly instinct” and dabbling in “men’s things” that end up getting the shtetl in trouble — may be among the weirdest treatises on Jewish mysticism ever committed to film.

Hanna completes the thought: “A woman.”

Despite its unsteadiness, in this modern time of epidemic the film, which is available on Netflix, does resonate. One of its central debates, for instance, is how a religious community can forge on in the face of a crisis, a debate we see playing out in our own world day-by-day. But in an artistic moment when horror films are increasingly held up as effective lenses for examining social flaws, “The Golem” also poses the question of how effectively the genre can address an unresolved contemporary terror. Viewed through the prism of the present, the film’s supernatural aspects are the least terrifying thing about it. More scary by far is the sense of constraint in the plague-surrounded village, whose residents know that to stray too far means death. While the film’s dialogue is often wooden, it still conveys all-too-realistically how a sense of confinement can toxify the atmosphere of a home and village

Is the movie good? No. Diverting? In places, yes. The expansive and handsomely-rendered village, steampunk plague masks and muddy sequence in which the golem is brought to life are entertaining. The stilted dialogue by Ariel Cohen and retrograde gender politics are disappointing, but ultimately also worth a chuckle. But, if you decide to give it your time, know that it is — by an accident of history — scary at points, reminding us of our own isolation now.

In any event, building a golem is not the way to fight this one — and the film is a cautionary tale against pursuing this measure. Don’t go out into the woods and dig up earth. You’ll just have to wash your hands — again — later.