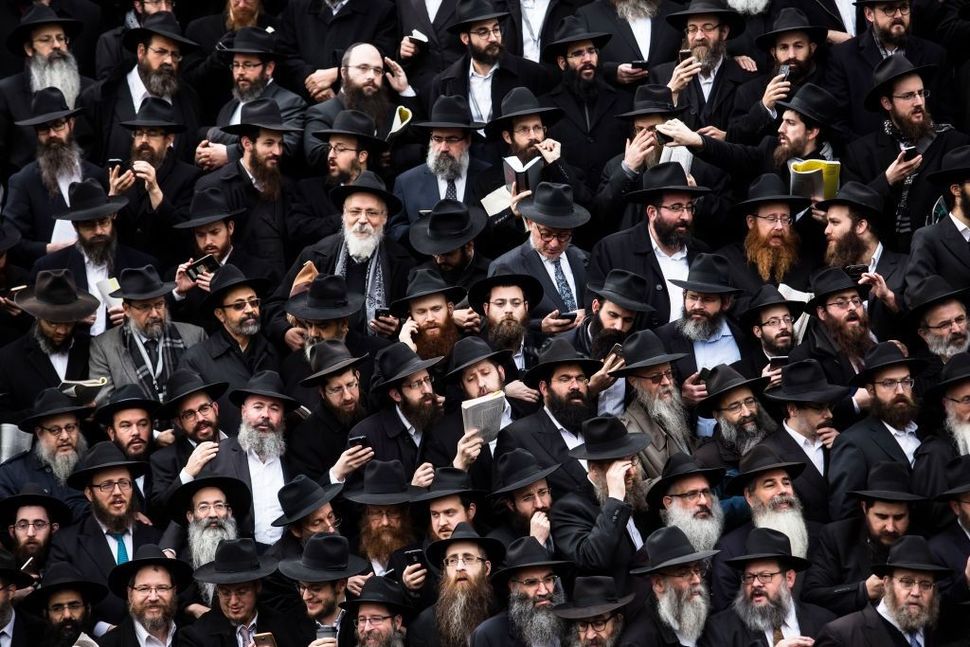 Hana Cohen’s apartment in Borough Park has a view onto the heavily Orthodox neighborhood’s 12th Avenue thoroughfare. There is a yeshiva, a daycare, a small synagogue, a restaurant. Tuesday, it was business as usual, with class in session and people shopping.

“Usually there’s kids playing by the street, there’s mothers on the stoops talking,” Cohen said. “But now it’s eerily quiet.” Since Tuesday afternoon, Orthodox communities across the New York City area have seen a dramatic reduction in public life. Major rabbis and community leaders, after receiving guidance from a White House official with ties to the Hasidic world, urged yeshivas, synagogues and wedding halls to close immediately, until further notice, to help enforce social distancing to stem the spread of the novel coronavirus.

Some were reversing themselves after calling for their flocks to keep living their normal lives as much as possible. And resistance persists, in pockets — even as word of new diagnoses and clusters flows in. On Tuesday: 100 cases in Borough Park, Brooklyn. Wednesday: 45 in Rockland County, N.Y. and multiple confirmed cases in Lakewood, N.J.

The shutdown of Haredi, sometimes called ultra-Orthodox, Jewish life that started in force Sunday night is unprecedented in an insular community that is religiously required to gather, and that has a deep distrust of outsiders based in part on centuries of discrimination. Like so many other mind-boggling phenomena of recent days — the NBA’s cancellation of the basketball season, the shutdown of the massive New York City public school system for over a month, the closing of the border between Canada and the United States — it’s testimony to the unique nature of the pandemic itself. Religious Jews had to ask themselves this high-stakes question: Did they have to abandon the central tenets of their communal life — celebrations, gatherings, and minyans for prayer — in order to preserve life?

“Social distancing and physical distancing are anathema for Haredi life,” said Sam Heilman, a sociologist of Orthodox Judaism at Queens College. “The quintessential Hasidic experience is a mob of people parting when the rebbe comes by,” Heilman said, referring to the rabbinic leader of Hasidic dynasties. “That’s just not possible anymore. How do you feel yourself to be part of something greater when you’re all alone?”

Dr. Stuart Ditchek, a pediatrician in South Brooklyn who prays at a Hasidic synagogue, said he had been trying to prepare rabbis he knows for about a month to get ready to shut down. For weeks, medical professionals in the community, as well as community organizations like Hatzalah, a volunteer paramedic group, and Shmira, a volunteer community watch group, had urged yeshivas to shut down and for synagogues to make dramatic changes to prayer services — without as much impact as they wanted. Last Wedneday, Ditchek gathered yeshiva principals and administrators at a synagogue in Flatbush to urge them to close immediately. About half the schools did, he said, while half didn’t.

The schools that chose to close cited the extreme risk to public health posed by the Covid-19 virus. Those that said they would remain open cited, in some cases, the importance of “_tinokos shel bais rabban,” the prayers of young children, in trying to bring good into the world.

On Sunday, the Grand Rabbi Aharon Teitelbaum, leader of the Satmar dynasty of Hasidic Jews in Kiryas Joel, in Orange County, released a video message that pushed back against the government’s decision to close down New York schools. He said that the observant Jewish community could not afford to follow such restrictions because their children to not have access to the internet to keep them occupied.

“They don’t understand what a Jewish family is,” Teitelbaum said, according to a translation from Yiddish by the Forward. “It’s crowded at home, there’s barely any room, beds are placed wherever there’s room, there’s no gentile entertainment and if the kids are sent home there’s no room at home so they’ll wander around in the streets and people will gather together anyway, so nothing would be accomplished anyway.”

Some yeshivas continued their usual class schedules on Monday and Tuesday. Beatrice Weber, an Orthodox Jew who lives in Williamsburg, said that her son’s yeshiva, Yeshiva Mesivta Arugas HaBosem, had sent a rare text message to parents Sunday night saying that nothing would change, and that class was still in session, even after New York City Mayor Bill de Blasio announced that public schools would close. Weber, who works at a Hasidic health clinic in Williamsburg, kept her son home Monday. She received a call from her son’s teacher, asking her why her son was not in class.

In the haredi community of Lakewood, N.J., at least one synagogue tried desperately to stay open by hewing to a long list of protective measures: staggering prayer times, much handwashing and disinfecting of surfaces, no elderly, no children, nobody who’s feeling sick, standing at least six feet apart.

“In such trying times we need the koach of tfila b’tzibur, please don’t force us to close our shul,” the rabbi wrote, using the Hebrew words for “strength of public prayer.”

Then, on Tuesday, came the White House phone call. Led by Avi Berkowitz, an assistant to Donald Trump and an aide to Jared Kushner, the call brought major rabbinic and community leaders together on the line. The call was necessary, multiple Hasidic sources said, because it cleared up what some parts of the community saw as mixed message from local and state governments in their response to the rapidly spread virus over the weekend.

For observant Jews, there is a clear Jewish legal standard that determines when a person is allowed to break religious rules: pikuach nefesh, the preservation of a life. This principle requires that, for example, a Jew who is experiencing chest pains on Shabbat use whatever technology available to them to seek medical attention.

If rabbis were to invoke pikuach nefesh for the coronavirus to require that Haredi Jews stay indoors, that would be a widely respected, some Haredi Jews told the Forward. But so far, the rabbis weren’t sure if such a ruling would be overstating American government policy — though governments in China, Italy and, on Tuesday, Israel, have implemented such restrictions.

“You have to understand: The authorities themselves were not really that clear in how they conveyed the message,” said Ezra Friedlander, a Hasidic lobbyist. “The governor said, close the schools. The mayor was reluctant. There wasn’t a clear-cut directive.”

It helped that Berkowitz is familiar with the Hasidic world. According to Friedlander, Berkowitz’s father used to daven at the synagogue of Friedlander’s own father, Rabbi Tzvi Hersh Friedlander, the rabbinic leader of the Liska dynasty of Hasidic Judaism. Berkowitz’s grandfather was also close to Rabbi Moses Teitelbaum (father of Rabbi Aharon Teitelbaum), the former leader of the Satmar dynasty, the largest Hasidic dynastic group.

“It’s not like some strange person was contacting them and needed a memo to understand who he was speaking with,” Friedlander said.

The call triggered a shift in practice. Teitelbaum, for example, decided on Tuesday to close down Kiryas Joel’s religious educational facilities, and is now quarantining in his home.

Late Tuesday night, the Orthodox rabbinic authority in Chicago announced that all synagogues should close along with yeshivas, and that there should be no minyans in the synagogues at all.

“The magnitude of this decision should impress upon every member of our community the seriousness of the situation,” the Chicago Rabbinical Council said in a statement. “Life cannot proceed as usual, significant lifestyle changes must be made.” On Wednesday morning, the principal called Beatrice Weber, who kept her son home starting Monday, to tell her: The school would be closing.

Aron Wieder, a Rockland County legislator representing a heavily Hasidic district, said that driving around Wednesday morning he saw very few people on the street. Monsey’s two largest synagogues were closed, he said, with signs saying they would reopen when it was determined safe to do so. It’s a shuttering of religious life in Monsey that no one has ever seen, he said.

“I myself have prayed my morning prayer at home,” he said — something he only does if he is sick. “People who have scheduled weddings are making them with a very small group of people — 10, 20 people.”

And by Wednesday evening, that Lakewood synagogue had closed down, said Rabbi Eli Steinberg, a member. The rabbi has given the congregation some suggestions to help them feel together even when they’re apart, Steinberg said. They’re going to pray at the same time, and even though they could finish the service more quickly when praying alone, they are going to give their private prayers the same amount of time they would spend in synagogue — about 45 minutes. 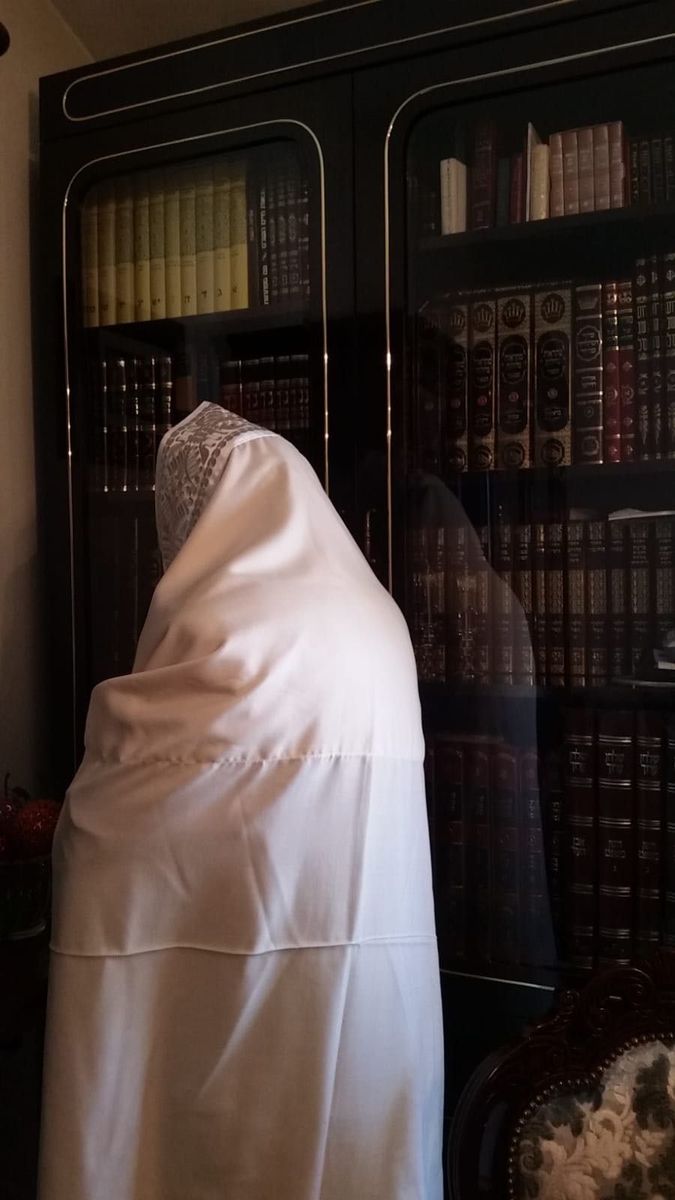 There are some holdouts to the recent shutdowns: A tent in Flatbush is cycling through minyans one at a time. And weddings are still on the calendar; it is considered bad luck to change the date of a wedding.

Indeed, Wednesday night saw one outside 770 Eastern Parkway, the iconic headquarters of the worldwide Chabad-Lubavitch movement. Earlier that day, leading rabbis had closed the facility for the first time in its history, citing coronavirus diagnoses in the neighborhood. But by about 6:30 p.m., a group of people had gathered near the building for a wedding, complete with little girls in puffy dresses, confetti and about 50 guests, according to the uniformed police officer stationed there.

Yaacov Behrman, a community activist who lives in Crown Heights and affiliates with the international Chabad movement, is getting married on Sunday. He and his bride, Shevi Katzman, have found a location that suits their needs: two backyards connected by an alley. Each yard will have 10 guests, who will stand at a distance from one another. Behrman and Katzman will stand in the alley with the rabbi who is marrying them. If their nieces and nephews want to come, they can watch from the window of one of the houses.

There were supposed to be as many as 400 guests, Berhman said. But, he added, they’re now trying to see the silver lining in having a small ceremony.

“In the Hasidic community, there can be a lot of distractions at weddings,” he said. “We also want to set an example for other people.”

Hana Cohen’s family went to the synagogue across the street to pray this morning, and may do so again tomorrow morning. “We need to daven now, so that this will go away,” she said. “Not until the rabbanim tell us, we need you to stay at home.”