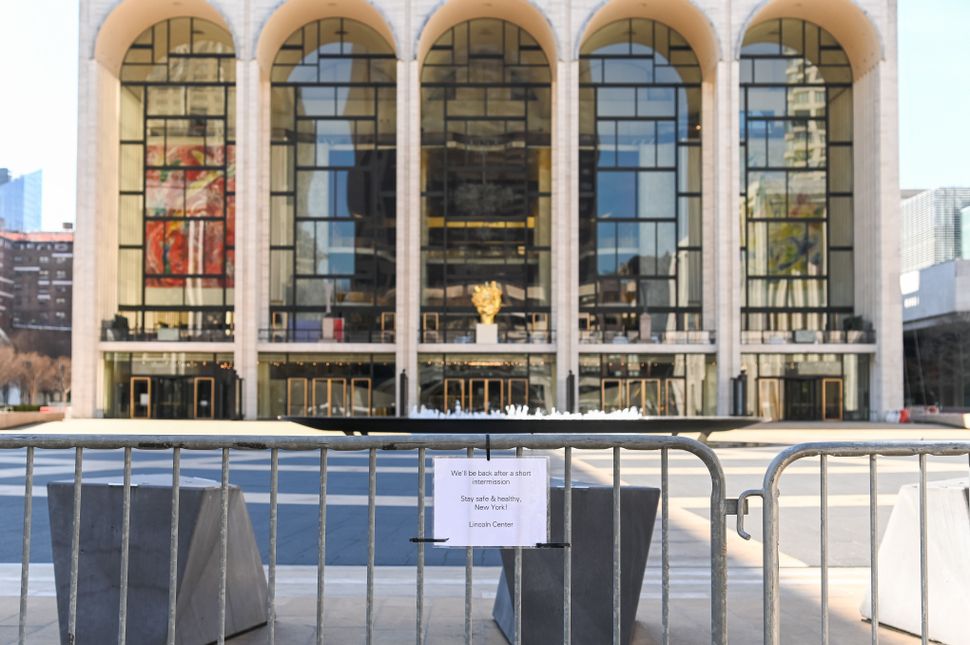 Lincoln Center, closed due to coronavirus. Image by Getty/Ben Gabbe/Contributor

Over 100 New York cultural institutions — from zoos to performance venues — have delivered a letter to Senator Chuck Schumer (D-NY) requesting a robust relief plan for their industry to respond to the economic setbacks caused by the coronavirus pandemic.

“Our sector was the first to be shut down by the government in response to the COVID crisis,” said the April 15 letter from New Yorkers for Arts & Culture, a city-wide coalition of cultural groups. “Now hundreds of thousands of New Yorkers face unemployment and extreme financial hardship.”

The letter, signed by such institutions as the Museum of Jewish Heritage, the Museum at Eldridge Street, the Tenement Museum, the New York City Ballet, Carnegie Hall and the Metropolitan Opera, asked the federal government to partner with them in passing legislation safeguarding cultural spaces and their workers.

“If cultural centers close, the businesses surrounding them will remain empty, street traffic will remain sparse, neighborhoods will struggle to regain financial vitality,” the letter said, citing a reports from the U.S. Bureau of Economic Analysis NYC Comptroller’s Report on the Creative Economy that arts and culture in New York City employs 400,00 workers and generates $110 billion (13% of the city’s overall economic activity) and represents 7.5% of the New York State Gross Domestic Profit.

New York cultural institutions are not alone in their predicament. A survey of 11,000 organizations by the D.C.-based nonprofit Americans for the Arts recently found that across the U.S., the arts and culture industry suffered a combined $4.5 billion loss from the coronavirus crisis.

The letter asked for cultural institutions to be included in stimulus packages earmarked for other industries as well as small business support.

“Our government must act,” the letter read. “As it devotes hundreds of billions to a list of industries, including airlines and hotels, the urgent question demands to be asked: What will happen if we let the number-one driver of tourists filling those planes and hotel rooms crater and collapse?”

The letter made the case that even amid closures cultural organizations are continuing to provide learning opportunities and engagement through online classes, concerts and more. When open, the letter continued, many serve as major employers for young people and immigrants, avenues for understanding cultural heritage and even as resources for survivors of domestic abuse.

“We will need all that culture has to offer to sustain us, to help us heal from this trauma, and to imagine new ways of building our city in the aftermath,” the letter stated.