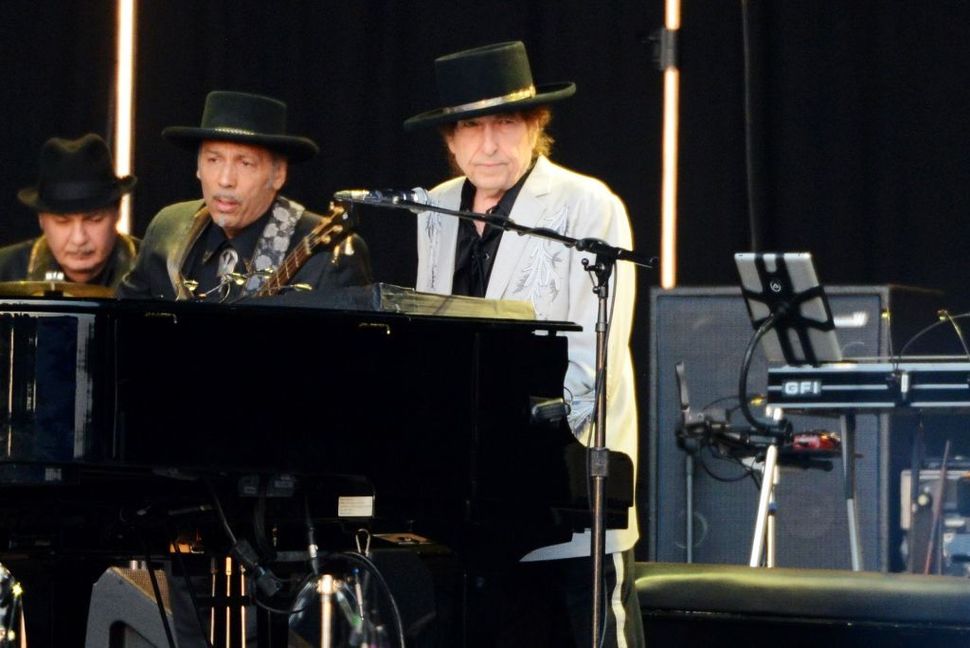 Oops, he did it again.

In the deep, dark, blackness of the night, the Mystic Oracle of Hibbing let drop a new utterance. Today, we awoke to the new sounds of Bob Dylan’s “I Contain Multitudes,” just three weeks after Dylan stunned believers and non-believers alike with a 17-minute “Waste Land”-like take on the JFK assassination and its aftermath called “Murder Most Foul.”

Clocking in at a mere four-and-a-half minutes, “I Contain Multitudes” boasts a wisp of a vocal melody (unlike the Sprechstimme of “Murder Most Foul”) over chord changes that give it a Tin Pan Alley-like feel not unknown in Dylan’s work of the last decade and a half. A small combo lays down a lovely soundscape, with woozy guitar chords, evocative pedal-steel guitar, and bowed bass.

Like “Murder Most Foul,” the new song is ripe with cultural references and allusions, beginning with the title, a phrase taken from Walt Whitman’s poem “Song of Myself.” Included in Whitman’s famous collection, “Leaves of Grass,” “Song of Myself” is viewed by some critics as the greatest American poem ever written. It’s worth noting that later editions of Whitman’s “Leaves of Grass” included an elegy to the slain President Abraham Lincoln.

Just like Dylan’s weatherman, whom you don’t need to tell you which way the wind blows, “I Contain Multitudes” doesn’t require the deep level of expert Talmudic scrutiny that “Murder Most Foul” invites. Dylan is pretty straightforward here when he invokes other poets, including William Blake (“I sing the Songs of Experience”) and Edgar Allen Poe (“got a tell-tale heart”), or artists like the Rolling Stones and David Bowie – or is it Mott the Hoople? – when he sings, “I rollick and I frolic with ‘All the Young Dudes.’” Although the line could be read as a similar nod toward queerness contained in the Bowie-penned original.

Dylan’s song, like Whitman’s poem, has a first-person narrator, but as with Whitman’s, Dylan’s “I” should not be read strictly as “Bob Dylan.” Indeed, the very title of the song suggests it’s not the meandering thoughts of one individual but those of a transcendent, Jungian consciousness that “contains multitudes.” Dylan really might be laying out here a song cycle that attempts, in his own, Dylanesque way, a similar sort of broad, all-encompassing cultural philosophy that Whitman did in “Leaves.”

That being said, there’s enough self-references in the lyrics to keep a Dylanologist up late into the night. “I paint landscapes, and I paint nudes,” he sings, and yes, he does – he’s even had gallery shows, and having once studied painting with Norman Raeben – one of Sholom Aleichem’s sons – he’s no piker with a paintbrush. He also sings, “I play Beethoven’s sonatas, Chopin’s preludes,” and while everyone’s image of Dylan includes a guitar strung around his shoulders, he has played piano since he was a kid. And for the last decade or more, piano has been his instrument of choice in live performance.

One line in particular stands out, however, and that’s “I’m just like Anne Frank, like Indiana Jones.” There’s a deep rabbit hole to go down here, especially when you recall that Indiana Jones made his bones in “Raiders of the Lost Ark” as a Nazi hunter, battling them in a race to see who would recover that lost Ark of the Covenant first. Nazis, Anne Frank … once again and perhaps for the thousandth time, Dylan just can’t help but allude to his Jewish background. You could write a book….

Surely it can’t hurt to know that when Dylan sings, “Red Cadillac and a black mustache,” he is referring to a somewhat obscure rockabilly song by that very title that he covered for a 2001 album called “Good Rockin’ Tonight: The Legacy of Sun Records,” a tribute to the Memphis label that recorded the likes of Elvis Presley, Charlie Rich, Roy Orbison, Jerry Lee Lewis, and Carl Perkins. Dylan also played the original version by Warren Smith on his Theme Time Radio Hour program.

You greedy old wolf/ I’ll show you my heart But not all of it/ only the hateful part. I’ll sell you down the river/ I’ll put a price on your head. What more can I tell you?/ I sleep with life and death in the same bed

—- the overall mood is relatively light, self-aware, even humorous. One wag even suggested that it sounds like “a slow-tempo LL Cool J boast song.”

With the almost-79-year-old Dylan having released two new songs in the past three weeks, there is much speculation that a long-rumored album of new songs might be in the pipeline. It’s interesting that when you plug “I Contain Multitudes” into the Spotify search bar, it comes up as both a song and an album. A clue, or a programming error? Maybe we all need to take turns staying up ‘til the stroke of midnight on Thursday nights tuned to bobdylan.com for the foreseeable future.