Why Bob Dylan is getting another 17 minutes of fame 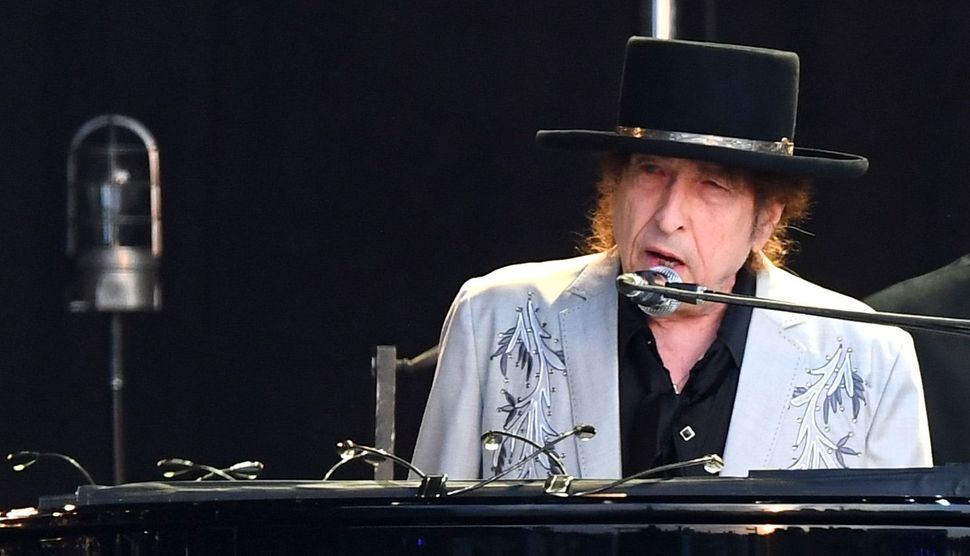 At nearly 17 minutes, Bob Dylan’s coronavirus-timed release “Murder Most Foul” is his longest song — and it appears to be buying the 78-year-old songwriter more time in the spotlight. Despite, or perhaps because of, its formidable length, the tune has staying power.

Many have taken the occasion of Dylan’s first original track in nearly a decade to really unpack the poet’s words. After my less than kind review, a number of those Dylan devotees landed in my inbox to chide my benighted understanding; on the Forward culture page, Seth Rogovoy took me to school. Still, I thought and hoped this might blow over fast (with wind-swept answers or otherwise). It has done anything but. The last time Dylan was percolating this much in the culture, the man had just won a Nobel Prize.

Last week, “Murder Most Foul” became Dylan’s first song to top the Billboard chart under his name (Peter, Paul and Mary and The Byrds previously reached the number one spot with covers of his songs). The track began its life on the charts with over 1.8 million streams in the U.S. alone. Clearly, Dylan connected with a pretty big swath of the country.

Many who were alive at the time of Kennedy’s death were quick to point out the depth of meaning they found in the epic ballad. In a piece for The Nation, Tim Shorrock contended that the song spoke powerfully to his cohort, writing that the narrative “marks the collapse of the American dream, dating from that terrible day in Dallas, when a certain evil in our midst was revealed in ways not seen for a hundred years—a day that, for Dylan, myself, and others of our generation is forever seared into our collective memory.”

Shorrock further indicated that the song, with its manic requests to DJ Wolfman Jack, also pays “tribute to the artists, obscure and famous, who’ve taken us through the hard times, and who continue to lift us up as we brave this new world of Covid-19, social distancing, and the death of thousands by government failure and incompetence.”

Fair enough, though it’s unclear when the piece was recorded. As for the JFK assassination, referring to it as the day our nation’s innocence died is not the freshest of insights.

But, while I have been accused (in emails) of not getting the song due to a generation gap, others closer to my age have expressed their admiration for the song, with millennial music mainstay Pitchfork hailing it as a “Best New Track.”

Others have seized on the single for purportedly advancing the philosophy of JFK conspiracy theorists. Rogovoy notes that the song shares its title with Stanley J. Marks’ 1967 book “Murder Most Foul!: The Conspiracy That Murdered President Kennedy.” In an interview with Salon, magazine founder David Talbot claimed that the mysterious “they” Dylan implicates in the assassination might be the “high-level national security operation led by deposed CIA Director Allen Dulles that targeted Kennedy, who was trying to prematurely end the Cold War, and then engineered the cover-up of the crime.”

I still stand by my contention that name dropping cultural touchstones, no matter how cannily, does not elevate a work of poetry to a work of genius. I think that Dylan, had he spent a bit more time on this one, could have kept his ripe-for-annotation allusions and disposed of the more overwrought, sacrificial lamb metaphors. (If this is his version of “The Waste Land,” he might have created a cryptic cliché on the level of “April is the cruelest month” rather than open with the ready-made and Mad Libs-esque “Twas a dark day in Dallas, November ‘63.”) I also think that the conspiracy talk gives the spoke-sung work a paranoid vibe that I don’t believe was meant either as irony or unreliable narration — a bad look.

But Dylan has clearly produced a work that has the internet abuzz . As easy to interpret as it seems to be on a first listen, deeper study yields double- and triple-meanings — say, the nod to Carl Wilson’s voice being featured on Warren Zevon’s “Desperado Under the Eaves” or Dylan’s “nightmare on Elm Street” which refers to not just a popular horror film franchise (which of course, in 1963, was decades away), but the Dallas street on which Kennedy was shot. Clever, if not quite Eliot-level.

But I’m not alone in dismissing Dylan’s newest as something of a ramble.

An April 2 sketch from “Late Night with Stephen Colbert” introduced the singer-songwriter’s latest album, “Bob Dylan Sings Lengthy Songs About U.S. Presidents To Help Pass The Time During the Quarantine.” The fictional record promised “seemingly-endless hits” like a 25-minute “Ballad of a Fat Man,” about the time William Howard Taft got trapped in his tub, a 45-minute tune where Dylan confuses John Adams and his son John Quincy Adams (“One was named John, so was the other/one was played by Paul Giamatti — I wonder if they were brothers?“) and a two-hour epic about Martin Van Buren’s mutton chops, which wonders “if his carpet matched his wooly white drapes.” 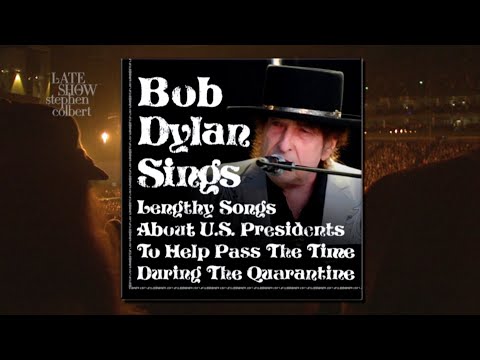 Last week on an episode of “Conan,” Colbert claimed that he had been excited to riff even further on Dylan’s COVID-19-timed release with a parody of “Subterranean Homesick Blues.” Dylan, Colbert told Conan O’Brien as their interview wound down, said he couldn’t move forward with the spoof unless he wanted to face a “Neutron bomb of a lawsuit.”

Colbert joked that he was “furious” at Dylan’s refusal, but read some of the proposed parody lyrics: 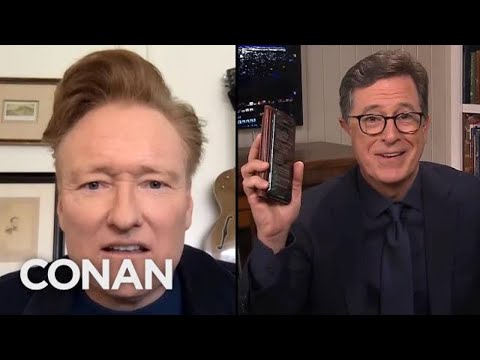 “C’mon, Bob,” Colbert pleaded, “This could heal a nation.”

In a way, “Murder Most Foul,” despite its twitchy, bloody subject matter, has brought the country together — or at least some of it.

Simon Vozick-Levinson of Rolling Stone claimed that the “Murder,” with its profusion of song titles “is really about the ways that music can comfort us in times of national trauma.” Proving his point, Dylan fans have devoted a Spotify playlist of all of the songs referenced in the track while Lauren Omkey of NPR opined that the 17-minute murder ballad “will occupy any Dylanologist holed up at home.”

And so it has, giving hardcore fans a central text to dissect and give drashot about. In the same way that “Tiger King” has gripped a nation, this song has given Dylanophiles a lot to consider. And the effect has cascaded beyond this one single.

This weekend, on the first-ever remote broadcast of “Saturday Night Live,” Coldplay frontman Chris Martin played an acoustic cover of “Shelter from the Storm,” which, as I have pointed out before, is an odd song to invoke when one wants to extol comfort. On April 13, Popmatters did a postmortem on Dylan’s 1965 album “Highway 61 Revisited.” If the musical “Girl From the North Country,” which uses Dylan’s songs to tell a story of the Dust Bowl set in his native Duluth, were allowed to continue its Broadway run, we would have reached Dylan critical mass as a culture.

So maybe I was wrong when I wrote that, “If Dylan was once an artist who embodied the zeitgeist, those days are clearly behind us.” He still is capturing something — our uncertainty, our fear, our sense of any number of national tragedies and, I might myself posit, a newly-realized Boomer vulnerability in the wake of the current moment.

But, some are skeptical Dylan still does well with the youth.

“You’d have a lot of young people who don’t know what you’re talking about,” Conan said of Colbert’s proposed Dylan parody. “You can’t be saying ‘Hey kids, it’s time I took down Bob Dylan.’”

To this, Colbert objected “I’m not taking him down, I’m celebrating Bob Dylan.”

Why Bob Dylan is getting another 17 minutes of fame