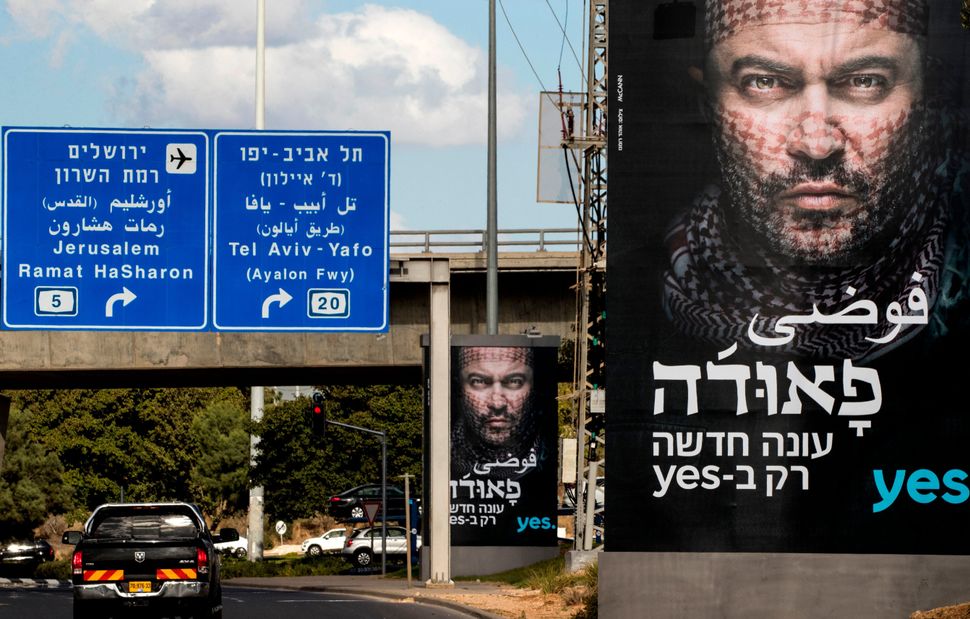 An ad for YES network’s ‘Fauda.’ Image by Getty/JACK GUEZ/Contributor

We need to talk about Doron’s body count.

Not the many, many terrorists the antihero of “Fauda,” played with bracing intensity by the former special forces soldier Lior Raz, has dispatched over three seasons. I’m talking about Doron’s record with women. Against walls and kitchen counters, and in the war room within earshot of his unit: The dude has a lot of sex.

A member of an elite undercover unit, Doron begins the show married to Gali, a Sabra stunner who — tired of his antics — is having an affair while shielding their children from his influence. He later hooks up with a beautiful, fiercely intelligent Palestinian doctor, Shirin Al Abed. And in the latest season, Doron gets with the much-younger commander of the Shin Bet’s Gaza desk, the tastefully-tattooed Hila, who is just as daring as he is and whose presence prompts the men on his team to swap some HR-violating remarks on her figure. (The women of “Fauda” are objectified far more than Doron ever is.) But the ruggedly- and classically-handsome soldiers in Doron’s company assume they don’t have a chance with her; they know that she has her eyes on Doron. We are meant to accept their eventual tumble in the sheets as inevitable.

But I, a heterosexual male, wondered: Should we? Do people who like men really like Doron, a bald, 5′ 7″ guy with a 7 o’clock shadow, a sizable scar across his forehead and a not-inconsiderable double chin?

His success with women suggests a different mismatched couple dynamic than we typically encountered on television. In American sitcoms — say “King of Queens” or “According to Jim” — schlubby comedians reliably marry and begin families with petite women several years their junior. Those men are funny, and the shows at least attempt to be, so we all recognize the pairings as a bit of a joke.

Doron has more in common with Vic Mackey from “The Shield” or Tony Soprano: He’s known for being dangerous, not entertaining. We know his conquests are meant to be taken seriously. And so Raz, a stocky spark plug with gleaming green eyes and a swarthy complexion, is an untraditional sex symbol, one whom David Remnick, editor-in-chief of The New Yorker, once physically likened to a trash compactor.

In an April 20 Zoom panel with Jewish Insider, Raz, who co-created “Fauda,” admitted that he’s hardly a leading man out of central casting. “You can see me, I’m a bald guy, not with the curly blond hair,” he said. “I’m not the typical hero that you cast all the time.” He framed his against-type casting as an boon for people that resemble him, claiming there are “so many men, now, calling me and writing me. They’re bald and have a little bit of beard. They’re saying ‘now my wife finds me attractive again because of you.’”

To test this formulation I asked my mother, who is married to a short, bearded guy with a shaved head, if she finds Doron attractive.

“He has an appeal,” my mom said over text. But she added that she prefers Steve, a wiry member of Doron’s team played by the very good-looking Doron Ben-David. Later, she updated me, noting that my father — the aforementioned short bearded guy — thinks that Doron is “sexy.”

I turned to colleagues, who said, after scanning Google images — for a Jewish publication, the Forward is weirdly short of “Fauda” watchers —that he wasn’t their type. Other people in my life who are attracted to men responded to Doron’s kavorka with tepid enthusiasm at best.

Something wasn’t lining up. “Fauda” positions Doron as irresistible; the response from my friends was a solid “meh.” So I turned to the internet to see if reality held up to fiction — surely someone, somewhere, would come through with the “Doron is hot” hot take.

“I lived in Tel Aviv for a couple of years and my roommate and I had a heated debate about his hotness,” Rosen, a millennial, said.

“He’s not exactly my type, but he sure was my roommate’s type, and she told me that he was the epitome of like macho, masculine hotness. That Israeli machismo archetype. I was really surprised that she was into him because she was like a hipster and I thought she would go for more of this indie poet type. But she loved this guy.”

Could this be a cultural divide between Israelis and Americans, I asked, realizing my lack of Hebrew might be limiting my hot Doron hits.

“I don’t think that’s true based on my very anecdotal research,” Rosen said. But, she said, she’s since begun working on a TV project about an American Jew in Israel with Raz and “Fauda” co-creator Avi Issacharof, meaning that she’s seen Doron — or at least the man who plays him — in the flesh.

“He has the je ne sais quoi in person, too,” she said.

Mike Hale of The New York Times was of some help, arguing in an April 16 article that Doron, alongside Harry Bosch of the eponymous Amazon series, presents “the platonic ideal of a tough guy.”

“[A]t the core of each is that same laconic hero, the volatile outsider who bends the rules (in Harry’s case) or shatters them (in Doron’s) in order to uphold a status quo that’s showing serious signs of wear,” Hale wrote. He went on to enumerate the men’s shared qualities: “the defensiveness, the loneliness, the distrust of bosses, the attraction to similarly hard-edged women” and “a cold stare that would make granite blanch,” before concluding that, in their Sisyphean insistence, these men present a “comfort” for trying times.

But does that tough obstinance make Doron hot? At this point I became desperate, tweeting out an appeal for answers to my urgent question. I received a token response from a veteran — an older gentleman — writing to say that “Doron is effective and a loose cannon simultaneously.” So, kinda.

Searching Twitter for combinations of “hot,” “sexy,” “Fauda,” and “Doron” found only a handful of relevant results, all but convincing me that Doron’s mojo is in fact, far more muted than the show would have us believe. In a last-ditch effort, I followed up with one of the tweeters, Amy Alkon, an advice columnist whose body of work promised a unique rationale for Doron’s sensual draw.

“He rings all these evolutionary bells for women,” said Alkon, 56, author of “Unf*ckology: A Field Guide to Living with Guts and Confidence”

“Women are commitment skeptics,” she said. “Female emotions push us to look for men we can count on — who are willing and able to invest in the children we might have with them.”

For Alkon — who admitted her take might not be “woke” — Doron fits that expectation. While the show has portrayed him as a less-than-suitable parent, she thinks he broadcasts the capacity to provide the protection that she says women are programmed to find attractive.

Plus, the fact that he’s a firebrand who often goes rogue also indicates that he is capable of intense love and follows a code of his own design — a serious turn-on.

“Powerful people can afford to break the rules,” Alkon said. “If you’re a peacock and you have a big huge tail, it’s probably going to be a little harder for you to get away from the lion. So the fact that you still exist with a big huge tail, you are Mr. Buff Peacock, you are high quality mate material.”

In terms of looks, Doron may be more of a peahen than a resplendently-tailed peacock — as Raz himself said, he doesn’t have much in the way of plumage — but that’s not really a strike against him. It’s all about attitude.

After exhaustive research, it’s clear that Doron’s attractiveness is strictly a matter of taste. If retaining the ability to hold our attention and cautious sympathy despite a series of increasingly poor decisions counts as attractive — and it often does, from the long-running appeal of Jack Bauer on “24” to the seemingly inexplicable thirst surrounding Howard Ratner of “Uncut Gems” — there can be no question that Doron is appealing. Even if he’s more hot-headed than hot.

_PJ Grisar is the Forward’s culture fellow. He can be reached at grisar@forward.com