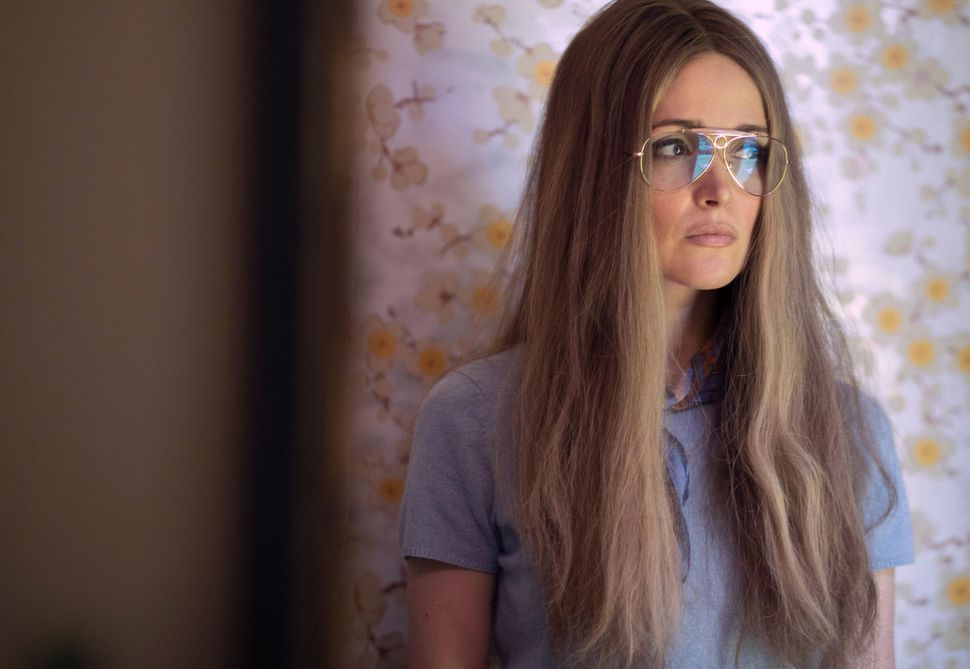 Rose Byrne as Gloria Steinem in ‘Mrs. America.’ Image by Courtesy of FX on Hulu

“Mrs. America” begins with a cake.

It’s a fluffy, gorgeous dome of meringue, left isolated and static on the screen before being shuttled into a crowded political fundraiser. At the fundraiser, the wives of the local elite put on a fashion show; backstage, they chat unhappily about the threat of “women’s libbers.” That housewives-versus-libbers clash will shortly become the central conflict in the FX miniseries, currently airing on Hulu. But in the meantime there’s the cake, symbolic of the dream of the mid-century housewife: Comforting, pristinely put-together and, above all, suggestive of the good life.

The series, which chronicles the battle over the Equal Rights Amendment — on one side, the feminists, including Gloria Steinem (Rose Byrne), Betty Friedan (Tracy Ullman) and Shirley Chisholm (Uzo Aduba); on the other, the ascendant anti-feminists, led by Phyllis Schlafly (Cate Blanchett) — is deeply political. But while the show is situated on the grand stage of national politics, and often embeds itself in the grit and muck of that scene, it’s primarily interested in a more intimate political question: For women, what does it mean to have a good life?

It’s an interesting moment to ask that question. There are signs of progress in America: This year, the ERA gained its 38th state ratification, meaning it has now, decades after the deadline, technically met the constitutional demands for creating a new amendment. Joe Biden, the presumed Democratic nominee for president, has pledged to choose a woman as his vice president.

And there are signs of regression: Rates of maternal mortality have steadily increased for the last 30 years, disproportionately among women of color. The gender pay gap has not meaningfully narrowed in a decade and a half. The right to an abortion has been systematically cut back in states across the country, and faces a significant federal threat from the predominantly conservative Supreme Court. If the feminists and anti-feminists of the 1970s believed they were fighting the determinative fight over what an American woman’s life ought to look like, they were wrong.

So the series is both relevant and not. The conflicts that define it are still broadly applicable, but the idea that they might ever reach a clear resolution seems, increasingly, like a reach. The show draws clear lines on who is in the right, and who the wrong: While the feminists, despite many missteps, generally strive to make the lives of the overlooked better and easier, Schlafly and her cohort fight exclusively for the comfort of people who look and live exactly like them. But “Mrs. America,” paradoxically, turns out to be good precisely because the audience knows not just that the good guys don’t win, but also that their fight will never reach a satisfactory conclusion. That limbo, rather than make the series aimless, lets the characters’ internal waverings over what a good life might look like — individually, and collectively — take center stage. The result is an unusually sensitive look at the way in which politics can infiltrate a life, and vice versa. The second-wave feminist phrase “the personal is political” is used so often as to seem denuded of meaning; slowly and painfully, “Mrs. America” revitalizes it.

So: When Schlafly, a would-be national security expert, attends a high-level meeting on nuclear policy with Senator Barry Goldwater and is quickly forced into the role of secretary, she asks Goldwater’s actual secretary for a notepad. “Here you go, Ms. Schlafly,” the secretary says: “It’s Mrs. Schlafly,” Schlafly responds, coldly. “I’m married.” A tiny interaction, yet it foretells a key precept of the movement Schlafly will start: That marriage, for women, confers a status that is an absolute and even divine marker of status. And, in fact, that conversation directly precedes Schlafly’s decision to shift her attention to the ERA, a topic that will let her assert herself as, for once, entitled to power. Her need for that unquestioned control helps craft the profoundly bigotted message for which her organization, STOP ERA, will ultimately stand. For her, being called “Mrs. Schlafly” isn’t a matter of accuracy; it’s a matter of absolute principle.

Likewise: When Steinem brushes off a pitch about racial tokenism in the workplace from Margaret Sloan (Bria Henderson), a black, lesbian editor at the brand-new Ms. Magazine, it’s clear she’s barely heard the idea. For her and the other white women in the meeting, it’s not a relatable story, so it doesn’t land. But Sloan’s discontent with Steinem’s dismissal helps prompt her to co-found the National Black Feminist Organization, eventually personally splitting from Steinem and reifying the ongoing conflict in the feminist movement between white women and women of color. As Sloan leaves the Ms. offices, Steinem clearly, wordlessly registers her error, a personal blindness that’s created division just where she wished for unity. We hope she grows from it, but know what she doesn’t: That the impact of similar blindness on the part of white feminists will sow discontent and impede progress for decades to come.

What’s the point? It can be exhausting, even paralyzing, to face the snail pace of progress. Watching Steinem and Bella Abzug (Margo Martindale) strike a bargain with a representative of Senator George McGovern, agreeing to persuade Chisholm’s presidential delegates to jump ship for McGovern in return for, in part, the promise that he would consider choosing a female vice president, I felt as if I’d been physically shocked. 40 years ago, and we’re still settling for the same old crumbs? Why even continue to try?

The answer that “Mrs. America” lands on is simple, and not. If we can’t agree on what a good life looks like, it’s easier to see the outlines of a bad one. In it, innaction is the norm; history is treated as untouchable. Schlafly’s view of the world was terribly rigid and prejudiced, much more so than “Mrs. America” begins to recount. But one of her most fundamental failings was that she couldn’t see the ability to choose — to make even the small decision to go by “Mrs.,” not “Ms.,” let alone the bigger choices her opponents advocated — as a gift. She saw it as a threat. The tragedy, for herself and the world she lived in, was that her choice to see things in that sad and narrow way was the most dangerous of all.