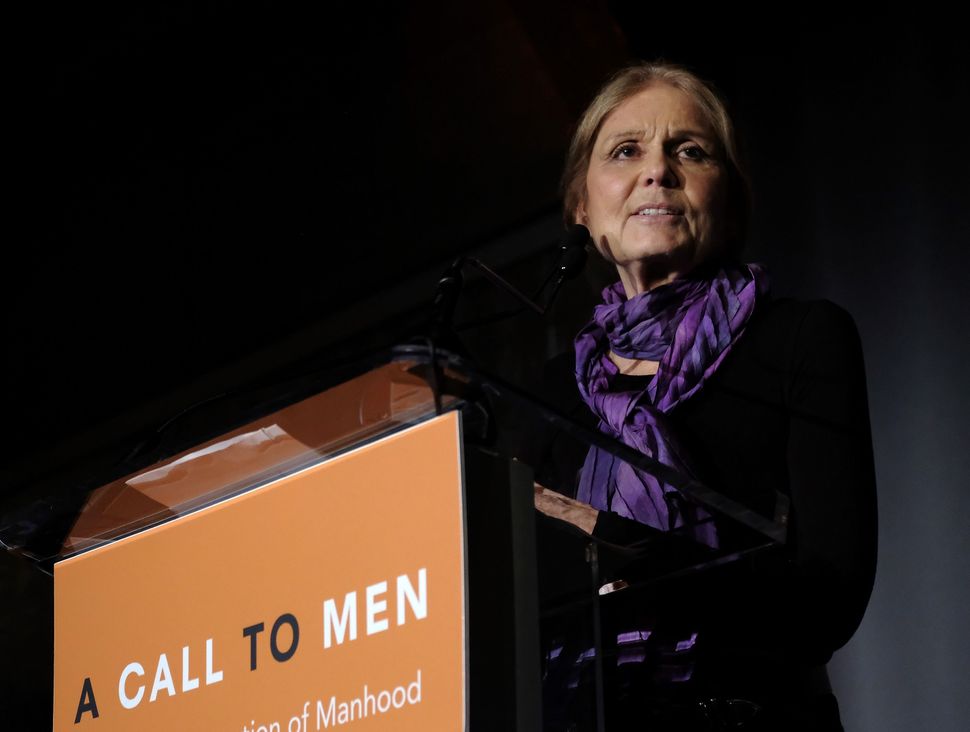 Hugh Hefner. Once he was alive, but now he is dead. Was he a visionary, or a pajama-wearing caveman? A misogynist prick, or a champion of female sexuality? This column does not exist to get to the bottom of any of those questions. It exists to celebrate the fact that Hugh Hefner was not Jewish, but Gloria Steinem is.

Hugh Hefner was not a Jew. He was an old, shriveled man, sure. He had more money than God, yes. He had sex with and married young women on the public stage, with clear financial implications, that is true. But he was not a Jew. YOU DON’T WIN THIS TIME, ANTI-SEMITES.

Gloria Steinem, the 83-year old super-hot writer, activist, and revolutionary — now there’s a Jew. And while we send Mr. Hefner’s family sincere condolences, today seems like a perfect opportunity to honor the actions of a historic Jewish feminist who dared to question Hefner’s empire.

In 1963, feminist journalist Gloria Steinem went undercover and applied for a job at Hefner’s Playboy Mansion under the alias “Marie Catherine Ochs.” Marie was four years younger than Steinem and had dropped out of college. “Bunny?” asked the receptionist, as Steinem walked into her interview in character. “Take off your coat.”

Steinem’s prose in the piece is crisp, cutting, and hysterically funny. She calls her butt her “untanned derriere.” She documents her false-eyelash fitting. She calls spending the day reading the “Bunny Bible” rulebook, “an informative Sunday.” Here is the definitive list of things she sees Bunny’s stuff in their bras to enlarge them: kleenex, dry cleaner’s bags, absorbent cotton, cut-up bunny tails, foam rubber, lamb’s wool, Kotex, silk scarves, and gym socks.

The “Bunny Bible” teaches her this: don’t be “friendly” with the men at the club, because if they believe they can become “familiar,” a Bunny will not have “the aura of glamour.” Bunnies “must always appear gay and cheerful.” The bible details a complex “demerit” system, which affects Bunnys’ salaries. The system was illegal.

Working at the club, Steinem learned that a large percentage of her tips would be taken, and that she would be earning minimum wage. She was commanded not to meet men after work within two blocks of the club. She practiced introducing herself to clients by saying, “I am your Bunny Marie.”

“This time she allowed me to stuff my own bosom” begins one of the early lines of the second part of Steinem’s expose. The first night of her work as a Bunny, Steinem made hundreds of dollars in tips but was allowed to keep none of them. She reported a “welt” on her spine, caused by the tight costume. Limping, she left the building and was propositioned by a cab driver. “What’s the matter?” he said. “You work in there, don’t you?”

“Marie” is propositioned many more times in the article, in and out of the club. But the biggest takeaway is that Bunnys are underpaid and mistreated. Their tips are stolen and their wages go to pay for their uniforms and makeup, or they will be fired. Steinem was constantly in physical pain due to her costume. Some of the girls talk about unionizing but decide they don’t trust unions.

The “glamour” of the bunny lifestyle was nothing special after all. “All women are bunnies,” Steinem realizes.

And then she spent the rest of her life trying to make it another way.

You can read the whole piece here.