‘May I help you, Mr. Perlman?’ — a lesson from the maestro at the Zabar’s lox counter 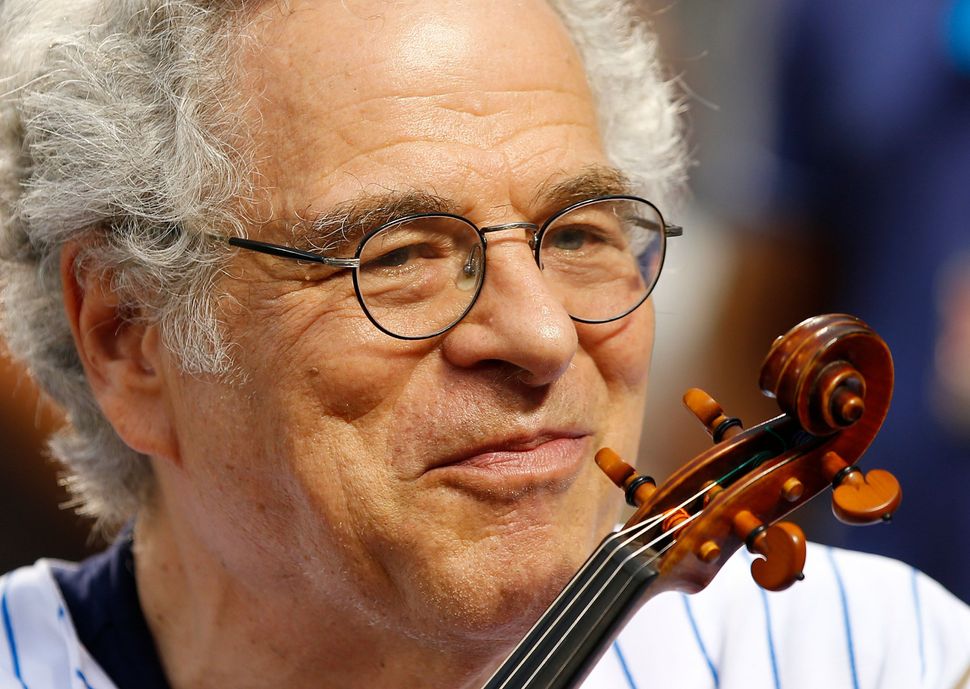 So, I was slicing away. I looked up and sitting before me was Itzhak Perlman. Mr. Perlman is a regular at Zabar’s — you know, like Woody Allen’s mother. He’s been shopping here for years. He is held in such high esteem that the store manager assigns one of the sub-managers to walk around the store with Perlman to help with any difficulties he might encounter while shopping because he now uses a wheelchair.

I was about to say, “May I help you, Mr. Perlman?” when my memory flooded with images from years back when my co-worker David, the only other Jewish lox slicer, waited on the great violinist. I couldn’t get over the fact that David would call him by his first name, and not only that, he would call him by his Yiddish name, Yitzhak.

I think David had been waiting on him long before I started to work at Zabar’s. David died some years ago and since then I was always looking for the opportunity to wait on Mr. Perlman, but it was difficult, because we have the number system at Zabar’s. The person with the next number gets waited on next and Perlman had escaped being the next number for me until that day. It was as though the stars were properly aligned and I was going to slice for Mr. Perlman. It was like my debut and he was my audience. I knew he would be watching me.

“How may I help you, Mr. Perlman?” I said, thinking that he would be impressed that I recognized him. None of the younger lox slicers on the line knew who he was. They were into a different kind of music, but I have been a lover of classical ever since I won the ”music appreciation” award for recognizing pieces by name back in the fifth grade.

“Which part of the salmon do you like best?” I asked. “The belly or the back, lean or fatty?”

I was obviously trying to make an impression, like he knew his business but I knew mine. I wanted to make the kind of impression so that he would always want me to wait on him whenever he wanted lox. I don’t remember his answer but I do remember trying to make beautiful slices for him. That was all he wanted. I wrapped it up nicely and walked out from behind the counter and handed him his Nova.

“Yes, we do, Mr. Perlman, we do, I’ll get them for you from that department. I’ll be right back.”

I proceeded to the cookie department and sought out the one he wanted. I took it off the shelf and noticed that not only was there the cookie he wanted, but that the company made variations. So I took another box off the shelf — same brand, slightly different — these had chocolate sprinkles on them. With both boxes of cookies in hand, I started walking back to the fish counter where Mr. Perlman was waiting.

On my way I was thinking of the fun I’ve had kibbitzing with selected customers. Not all the customers are kibbitzing ready, but when you find the right one it could lead to a sweet interlude. I wondered if Mr. Perlman liked to spar. Wouldn’t it be fun if I slipped one in on the maestro?

I handed him the box of cookies and told him that the company made the same one with sprinkles, and asked if he’d like to try those as well. He looked up at me and said, “No thank you, I’ll stick with the original. When you’ve got something good, you stick with it.”

I saw my opportunity.

I thought for a moment and then said to him, “Mr. Perlman, if a young boy or girl came up to you and said ‘I have been playing the violin for years and I recently completed writing my first concerto — would you be willing to play it for me?’ Would you say to that boy or girl that you would not play it because you found Beethoven’s Violin Concerto and when you find something so good you stick with it?’”

I thought I had him.

He looked up at me, smiled, and said “That’s an entirely different matter.”

I guess he was trying to tell me that cookies and concertos don’t belong on the same plate.

Len Berk worked behind the lox counter at Zabar’s for 26 years.

‘May I help you, Mr. Perlman?’ — a lesson from the maestro at the Zabar’s lox counter