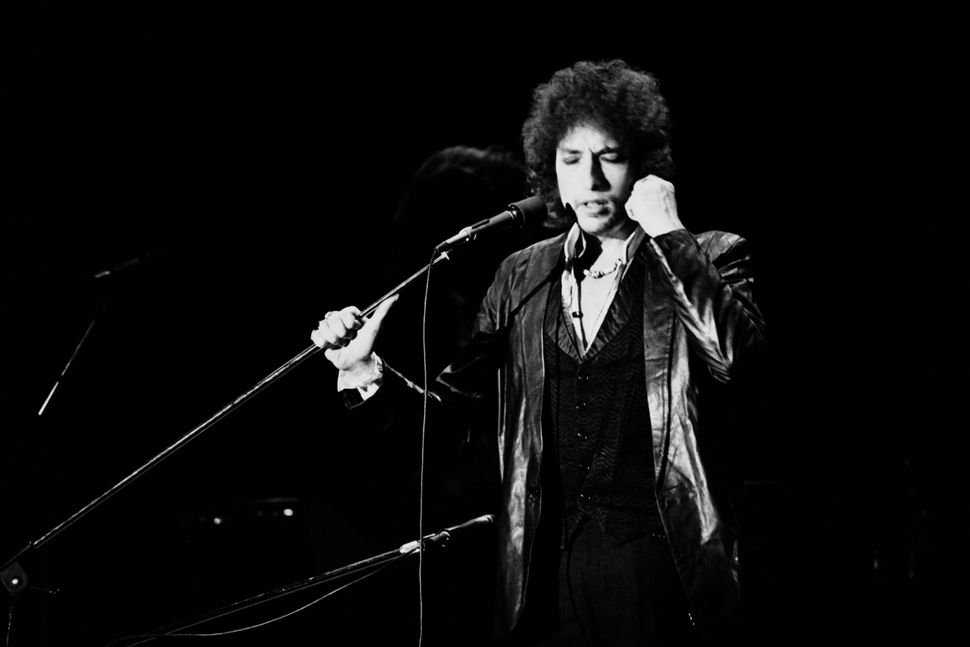 In March 1963, Bob Dylan made a demo recording of “Long Time Gone,” one of numerous original songs he wrote for his publishing company, Witmark. In that early song, never officially released, Dylan sings, “I know I ain’t no prophet / And I ain’t no prophet’s son.” Dylan was lyrically riffing on Amos 7:14, where that Biblical prophet says, “‘I am not a prophet nor am I the son of a prophet.” It was as revealing a gesture of self-awareness as one would find in Dylan’s early work. By stating the negative – that he’s not a prophet, before anyone has even suggested that he might actually be one – he was already implying the opposite – that he is a prophet, or at least, that the question of his being a prophet would become one of significance. (To say nothing of the fact that he stated this based upon the words of an actual Prophet with a capital “P”.)

Fast forward to 2007, when, in a memoir, Pope Benedict XVI took his predecessor, John Paul II, to task for having allowed Bob Dylan to perform at a Vatican youth gathering. “There was reason to be skeptical – I was, and in some ways I still am – over whether it was really right to allow this type of ‘prophet’ to appear.” Take that, you soon-to-be Nobel Prize-winning mystic poet.

With his brand new song, “False Prophet,” released this morning and destined for inclusion on “Rough and Rowdy Ways,” his first album of original songs in eight years, to be released on June 19, Dylan once again picks up his side of the conversation, perhaps even answering the Pope, when he sings in his glorious, late-career Muddy Waters-like elastic growl, “I ain’t no false prophet, I just know what I know.”

So if he ain’t no false prophet, then just what is he?

The song itself invites a number of different readings. There are hints that the narrator is Satan (as there were previously on “Murder Most Foul”—the first of three new songs Dylan has doled out once every three weeks — according to Dylan author Harold Lepidus). “Hello Mary Lou, hello Miss Pearl, my fleet-footed guides from the underworld,” sings Dylan, before lasciviously inviting a nameless consort “for a walk in the garden.” If you feel like you’ve seen this movie before, you’re not alone.

But there is equal evidence that the narrator is not Satan, but rather his very antithesis. “Oh you poor devil, look up if you will / The city of God is there on the hill,” he sings, taunting the Evil One with a reference to Jerusalem in all its heavenly glory. The singer also seems to prefer goodness over evil, right over wrong: “I’m the enemy of treason,” he describes himself, the “enemy of strife, enemy of the unlived meaningless life.” Here he seems more like a left-wing critic of consumerism and greed than a purveyor of negativity: “Put out your hand, there’s nothing to hold / Open your mouth, I’ll stuff it with gold.” One might even say he’s being downright prophetic, in the original sense of the term, wherein prophets engaged in socio-cultural criticism, warning against selfishness, immorality and blatant lawbreaking and foretelling the bloody consequences that would result.

As always, it’s fun to read Bob Dylan himself into “False Prophet.” Dylan, who has indeed been referred to as a prophet constantly since the early 1960s, veritably begs the question just with the title alone. And self-references abound, from the serious and plaintive —“I opened my heart to the world and the world came in …. I sing songs of love, I sing songs of betrayal”—to the playful and boastful—“I’m first among equals, second to none, last of the best, you can bury the rest,” sings Dylan, doing his best Muhammad Ali imitation.

The great 20th-century Jewish sage Abraham Joshua Heschel wrote in his magisterial work “The Prophets” that “The prophet is a person who, living in dismay, has the power to transcend his dismay.” I can’t think of a better way to describe what Bob Dylan is doing in “False Prophet,” and, indeed, what he has been doing at least as far back as he sang, “I know I ain’t no prophet, and I ain’t no prophet’s son.”