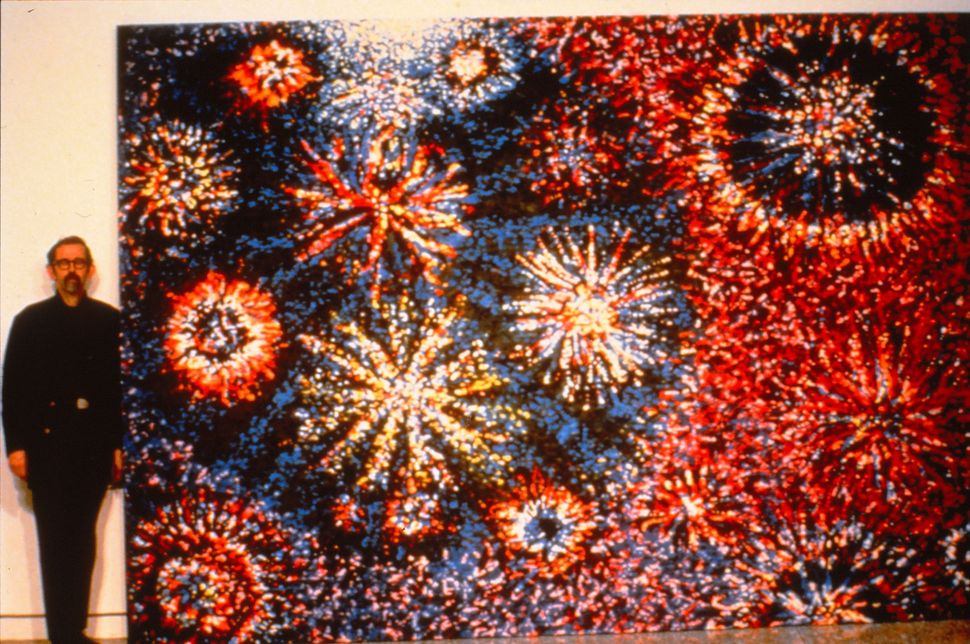 “Genesis, 85-1 (Tikkun) scanamural,” by Aribert Munzner, acrylic on canvas. The artist stands to the left for scale. Image by Courtesy of Aribert Munzner

On May 30, Aribert Munzner’s art studio in South Minneapolis caught fire and was doused with 1,000 gallons of water.

Protesters responding to the death of George Floyd burned a bar across the street and the wind picked up embers that landed on the Civil War-era Ivy Arts Building’s wooden roof. The fire department quickly put out the flames, but when Munzner arrived the following day to see the damage, he found that nearly 70 years of work had been marred by sludge. The studio was totaled along with much of the building’s front entrance and second floor.

But Munzner, 90 — who goes by Ari – calls himself an “incredible optimist.” He sees this unfortunate event as another opportunity in his life of kismet and cosmic connection.

“If I can believe what I’ve been teaching all these years – that each moment is a magic moment – I’m starting again,” Munzner said. “I am doing my own genesis in what I am going to do from now on.”

When Munzner speaks of genesis, he’s naming both his major work and a kind of life philosophy. Since the 1950s, he’s attempted to capture moments in time and space in his “Genesis” series. One painting captures just a 15-second period — the flick of a brushstroke — while others, pointillistic and complex slices of the universe or microverse, take years. 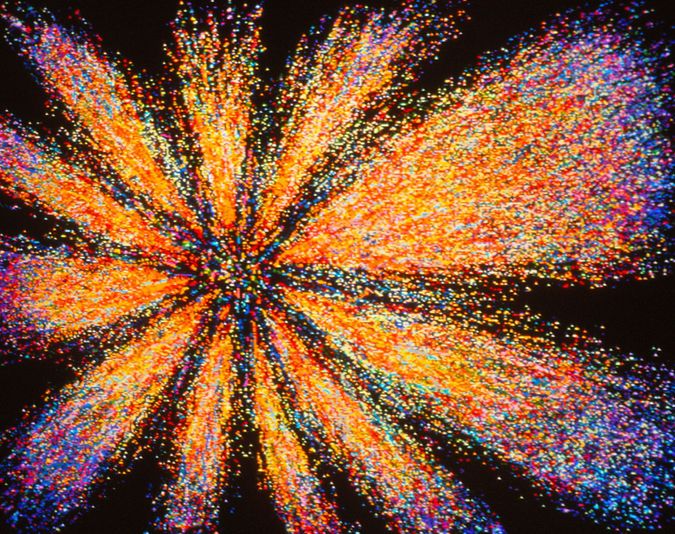 Munzner, who studied with photomicroscopist Roman Vishniac, who was known for his photos of shtetl life before the Holocaust, speaks in a rapid, reedy yet robust voice that emanates from a very slight frame. His trains of thought are kinetic and wide ranging: the microcosm and macrocosm, quantum physics, the Big Bang and string theory and good old-fashioned Jewish mysticism and Eastern religion.

“I am thinking about how living my life history, my personal journeys have stimulated, or in some way create, an awareness of the very, very subtle and fragile reality of the enormous opportunity of life, and on the other hand how each person makes a decision on what part of this awesome kind of miracle they’re involved in,” Munzner said of the questions he brings to his work. 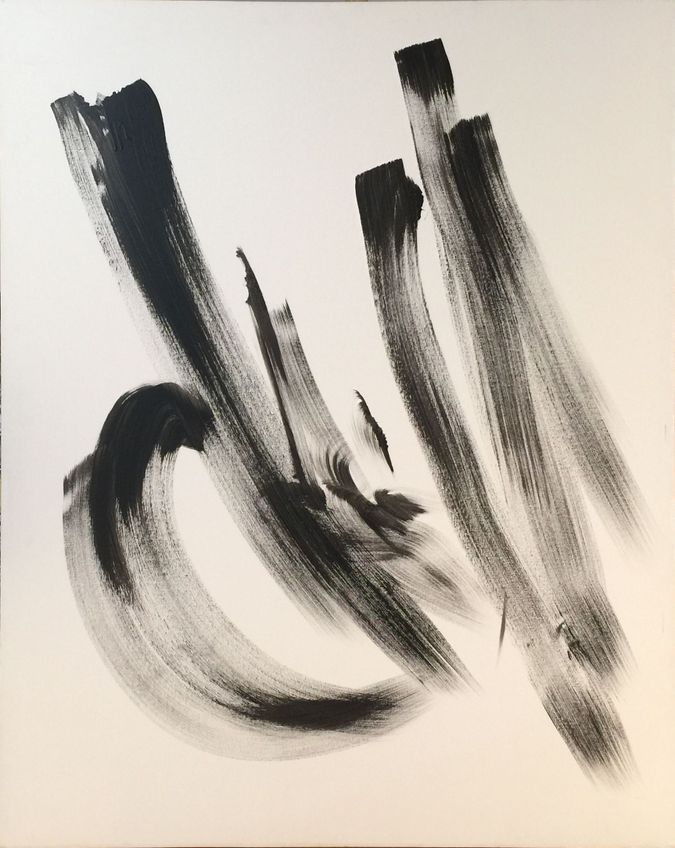 Born in Mannheim, Germany in 1930, Munzner moved with his family to Baghdad in 1937 with the help of a family friend. There, Munzner and his brother learned Arabic from a Lebanese Jesuit priest. Munzner’s father, a physician, tried to rebuild a practice that was disrupted by the Nazis, but the family left when the war started. They were able to make their way to New York because Munzner’s father had been born in Johannesburg to parents who fled pogroms in the Pale of Settlement and later left for Germany during the Boer War. The U.S. was under its quota for South African immigrants, so a visa was granted.

Relocating to Alton, N.Y., near Rochester, Munzner became aware of his good fortune early on. At his bar mitzvah, the rabbi of his Conservative shul in Rochester gave the brache at the bimah after Munzner’s haftarah.

“He said ‘Aryeh, you are one of the lucky ones, and you owe it to your people to help your people.’” 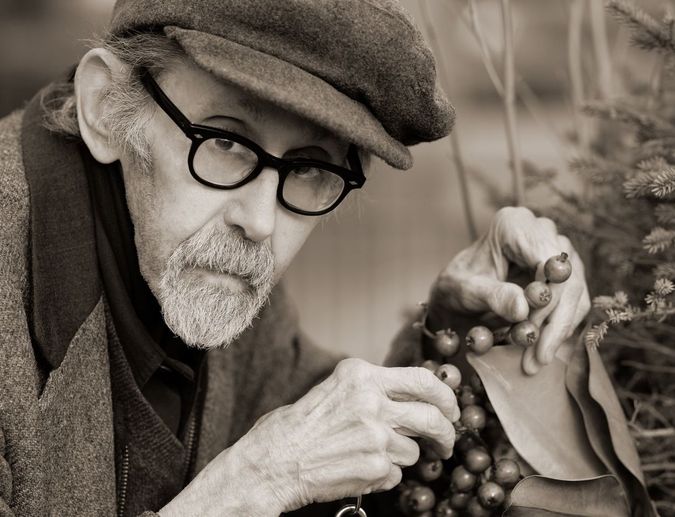 Munzner, who spoke to me over Zoom in black horn rims and a dark shirt, was expected to take over his father’s medical practice. Instead, he matriculated as a pre-law student at Syracuse University with the idea that he would become an international lawyer and do his part for justice. But after Munzner started encountering European emigré artists on campus, he switched his major to art. On his days off, he would go to hear jazz in Manhattan where he became acquainted with the early Abstract Expressionists. 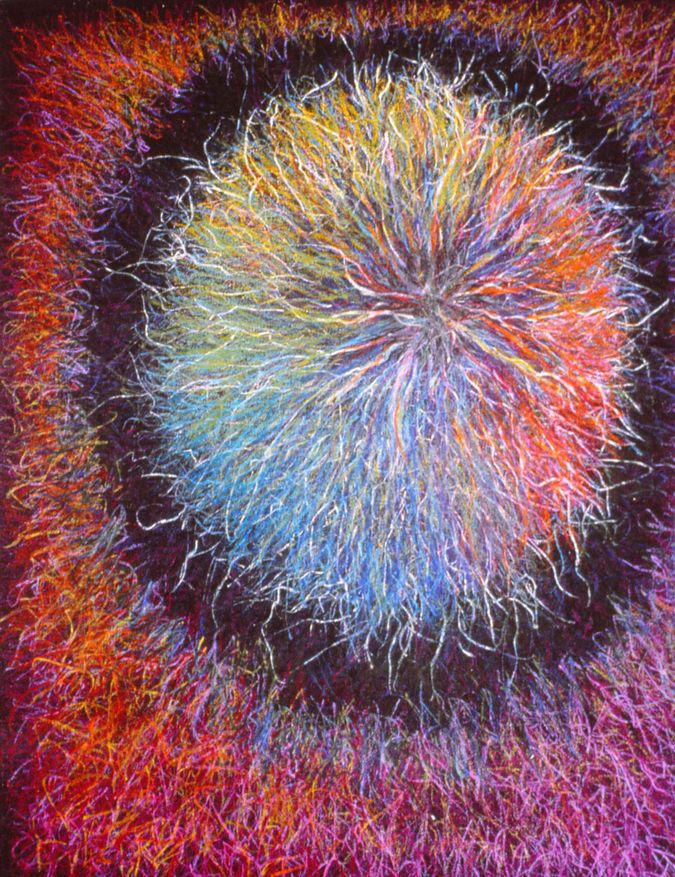 After many reinventions and false starts, Munzner found his place in Minnesota.

“He has had this life in terms of a lot of starting overs in terms of location and biography,” Munzner’s daughter Tamara Munzner, an information visualization expert and professor of computer science at the University of British Columbia, told me. “Like the day he decided to quit smoking, he threw his pipe out the window and never smoked again. Just cold turkey when mom said she didn’t like it one day.”

Munzner taught for 50 years at the Minneapolis College of Art and Design (MCAD) before retiring in 2005 to focus on his own work. (Tamara Munzner tells me he never intended to stay in Minneapolis for more than a year — or get married, have children or own a house. “He was systematically forsworn.”)

His best-laid plans take a cue from the wider world around him. 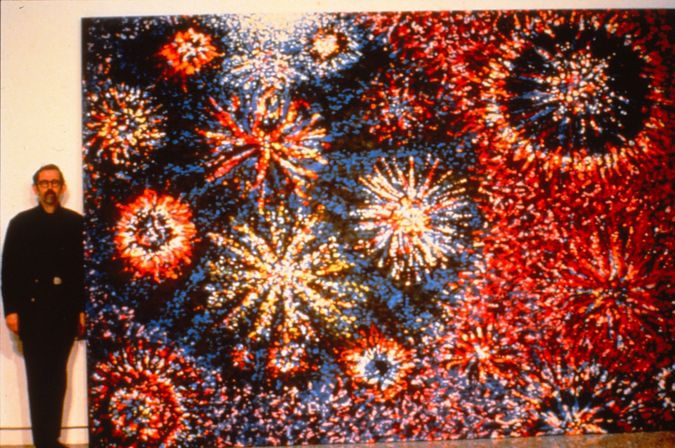 “Genesis, 85-1 (Tikkun) scanamural,” by Aribert Munzner, acrylic on canvas. The artist stands to the left for scale. Image by Courtesy of Aribert Munzner

One day, driving down Main Street with kabbalist Zalman Schachter-Shalomi, one of the founders of the Jewish Renewal movement, whom he met in the late ’60s, the rebbe improvised a nigun based on things he glimpsed out the window.

“He said ‘Oh, Hennepin Avenue, Third Street, there’s a Buick,’” Munzner imitated Schachter-Shalomi’s lofty vocal riff. Munzner said Zalman was converting the energy of the secular to the sacred, and he realized he could do the same with his art.

“My davening is painting,” he said. 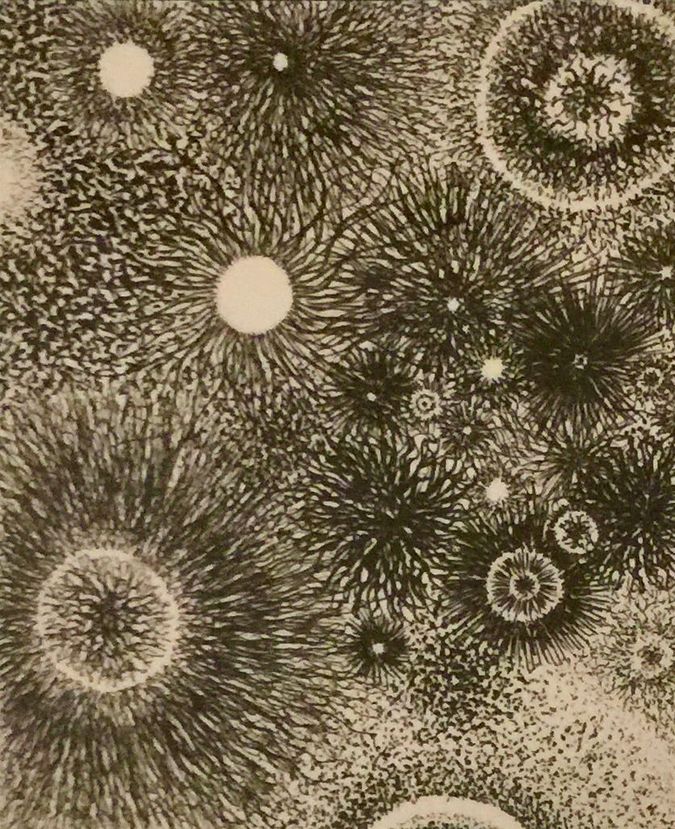 The artist doesn’t claim to belong to the Jewish community — he’s studied with yogis and maharishis and is now working with a Qigong master. He identifies more with, as he puts it, a juggler in a bespoke overcoat outside a shul than the people inside with the minyan.

Munzner found his people in Minneapolis among the artists he educated. A student editor produced his major book catalogue “Aribert Munzner: Teacher, Colleague, Artist,” which contains a survey of his work and conversations with his students and peers. Munzner said he’s best known as a “prof who sits around pontificating.”

“He was serious, he was involved,” said Pier Marton, a video artist who met Munzner as a visiting artist at MCAD 35 years ago. Marton remembers the contrast between Munzner’s office space and his studio off campus.

“When you entered his studio, which I did once or twice, I remember being awed by the pastels — he does use a variety of media and some of them are definitely pastel-type tools and they were arranged almost like an exploded rainbow — but huge.” 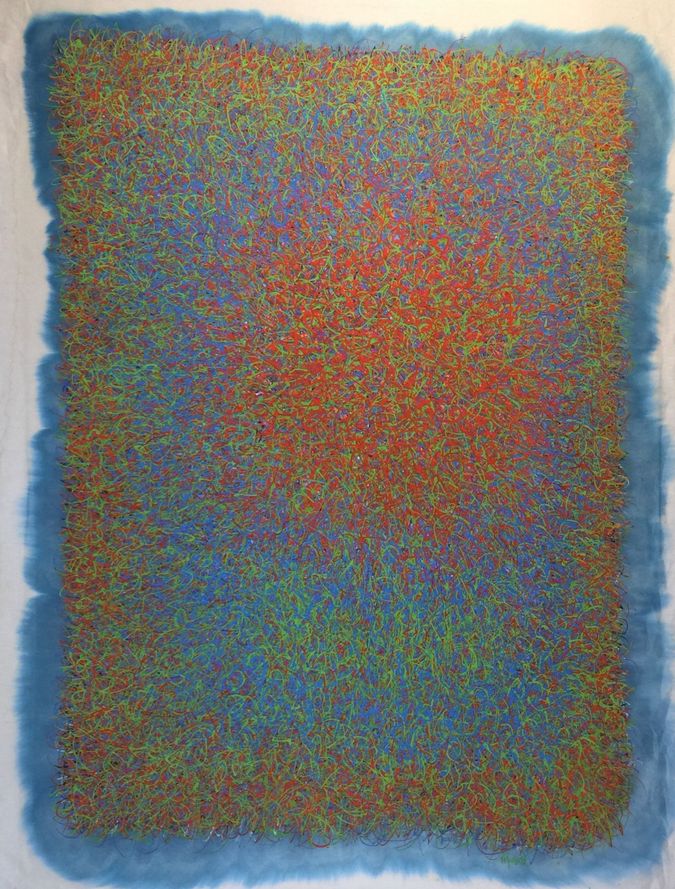 As a rule, Munzner kept his process and his teaching separate.

“I wonder what it would be like if he had put as much energy into promoting his own art as he had put into teaching,” Tamara Munzner said. “I think he would be much better known. So part of me thinks about that wistfully, but I also think that was a choice and he did amazing things on that front as well.”

When I spoke to Munzner, he had just returned from a day leading a caravan of cars rehousing his work in warehouses in St. Paul. His moving team was made up of former students and neighbors from the Ivy Arts Building. Munzner and his daughter are currently looking for a new space for him and, thankfully, much of the art was deemed salvageable.

While Tamara Munzner tells me her father is a man who can be stubbornly stuck in his ways — naming nearly every one of his paintings “Genesis” for 50 years or wearing nothing but black and white for a decade — his life has made him adaptable to changes of scene and receptive to the unexpected. 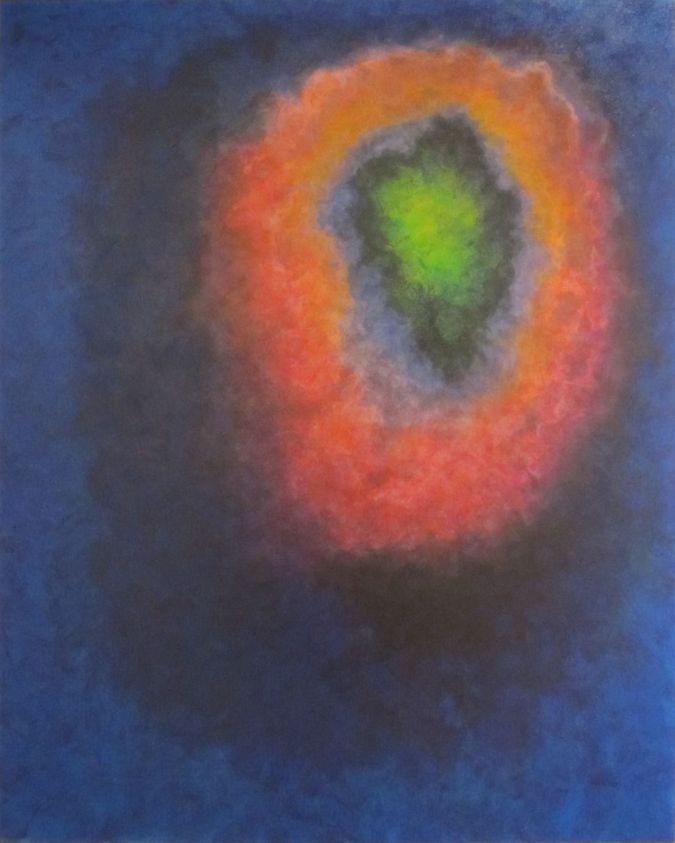 “If you had to pick a 90-year-old who weighs 94 pounds to have this sort of terrible tragedy happen to, I think he’s one of the few who could be like ‘I will restart,’” Tamara Munzner said.

But the process of beginning again, Munzner insists, starts with him. He’s letting go of any anger “from my nano, mega-nano cells up to my hair” and forgiving himself for harboring any.

“Because a lot of the work is damaged — most of it — I’m going to start doing something different and I’m now in my 90th year ready to start all over again,” Munzner said.

I asked him if he had any ideas what he might do.

“The idea is not to think,” he said. “I’m a vessel, like the vessels in Kabbalah, the shards — to gather the shards — and see if I can hear the sound of those shards tingling their heavenly, angelic dum-da-da-dum-dum. So I don’t know what I’m going to do, but that makes me very happy.”