Artist Mira Lehr on Buckminster Fuller, the environment and blowing things up 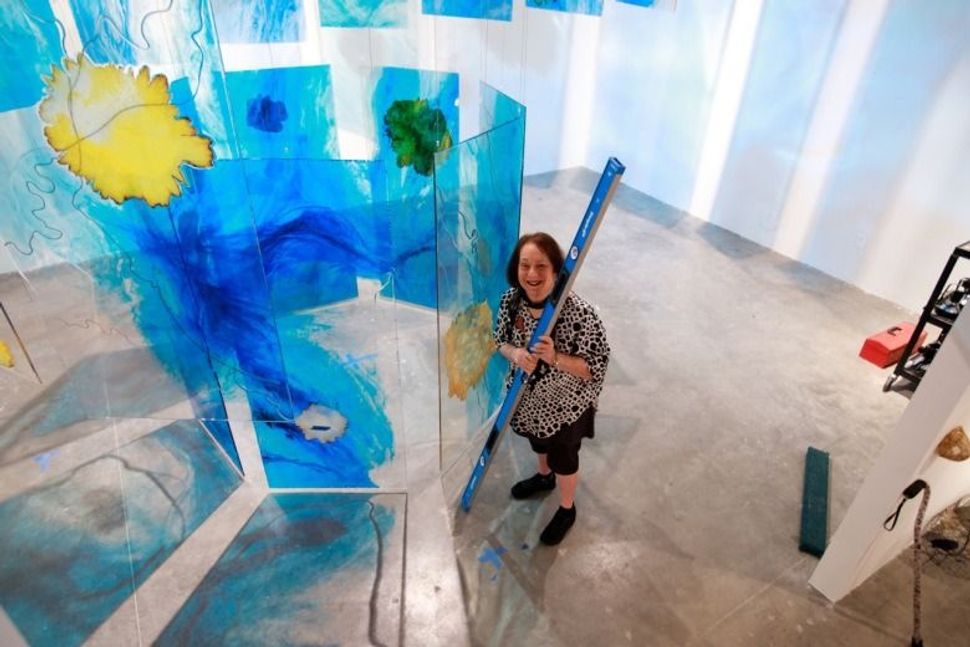 Mira Lehr with her installation, part of “High Water Mark” at the Mennello Museum of American Art. Image by Courtesy of Mira Lehr

In the summer of 1969, as humanity left its first footprints on the Moon, architect, futurist and inventor Buckminster Fuller was thinking about the Earth.

Gathering a team of students in New York, he staged a bold experiment in global sustainability, tapping a growing concern for the planet that would culminate one year later in the inaugural Earth Day. Fuller led the first-ever session of his years-in-development World Game, a collaborative simulation aimed at solving the problems of resource scarcity and overpopulation through cooperation. The game, played on a board that looked like a cubist projection of the globe, used logistics and design to anticipate potential catastrophes and ensure the well-being of everyone sharing “Spaceship Earth.”

In the group of 26 young people selected by Fuller from 16 different disciplines, from physical and social science to computers and the humanities, two participants were artists. Mira Lehr was one of them.

Half a century later, Lehr, 85, is world-renowned artist; her art was a main attraction at last year’s Art Basel Miami Beach festival, where she hung 180 resin sculptures from the ceiling of the Jewish Museum of Florida-FIU.

Her work with video, sculpture and gun-powder-ignited paintings (“I’m lucky I still have eyelashes,” she said) is as formidable as her reputation as a champion of women artists. In 1960, after studying with disciples of the abstract expressionist Hans Hofmann, Lehr co-founded Continuum, one of the country’s first co-ops for women artists, and convinced her New York colleagues to trek down to the group’s homebase in Miami to lead workshops.

Recently, Lehr’s attention has returned to the lessons of the World Game and its push for bold solutions on an international scale. Her new exhibit at Orlando’s Mennello Museum of American Art, “High Water Mark,” takes visitors underwater with reflective, sea-colored panels and coral-like brass netting ensconcing the names of extinct species. She also transports viewers back in time to celebrate Fuller, with works inspired by his concept of “Spaceship Earth,” in an effort to call attention to what she believes the world risks losing on its current trajectory.

While the Mennello Museum is closed indefinitely due to the coronavirus pandemic, Lehr has made the show available online through her online portfolio, “MiraVision,” for the 50th anniversary of Earth Day. The Forward spoke with Lehr about taking her work digital, her memories of the 1969 World Game and how she’s continuing to create while remaining socially distant. The following interview has been edited for length and clarity.

PJ Grisar: You launched MiraVision with some quotes from Buckminster Fuller, who you met as part of his World Game Day project. How did you get involved with that endeavor, and what was that experience like?

Mira Lehr: It was amazing! I had heard about Fuller but I hadn’t ever thought I would work with him. There was a notice in the Saturday Review of Books and I thought “I’ll apply.” I had to leave, go to New York and miss my kid’s graduation from grade school. We met at the New York Studio School in the Village. We sat around this big table and all around us were Bucky Fuller’s Dymaxion maps, where the Earth is pictured as an island within the ocean. We had all kinds of resources from the UN about where the land was arable, where crops were growing, where storms were coming — all kinds of things we could use to map out a scenario, which was the goal of this World Game Project: in the World Game every human being is a winner. We set out to exceed the optimum resources that would make man successful on the planet. 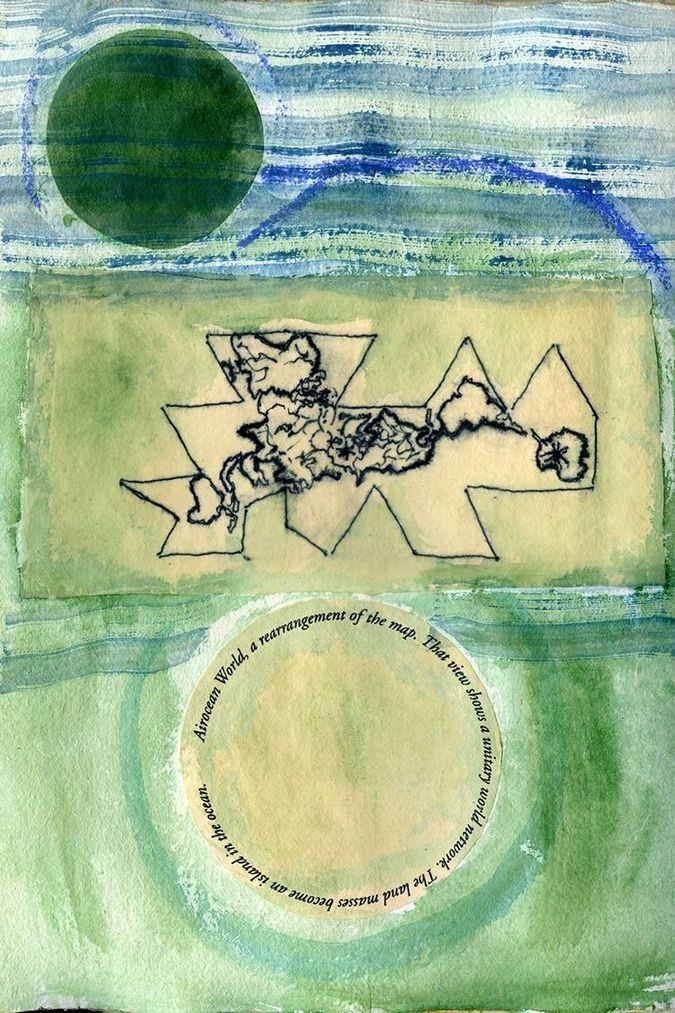 Bucky was an amazing man to be with. He was a short little guy and he had these big glasses that made him look like a gnome, kind of, with his great big eyes on this little body with wiry white hair. It was an eye-opener for me. I had always liked working from nature in my art, but I had never thought about the Earth in its totality like I started to do when I was with him.

I feel like we’re so far removed from thinking in terms of global solutions now. The Paris Accords — all these measures seem lacking.

Fuller’s idea was that everybody would see on the nightly news report what situation the planet was in and the young people would be so influenced by mommy and daddy they would see with their own eyes and do something about it, but it didn’t work out like that. Big disappointment. But now with this shutting in of everyone the use of fossil fuels has gone way down, so people now see over certain countries pollution has eased up. You can see through the Venice Canals now; they’re clear. I’m thinking some kind of mystical thing has happened to make us realize what we need to do about the planet, but then again I’m a dreamer. 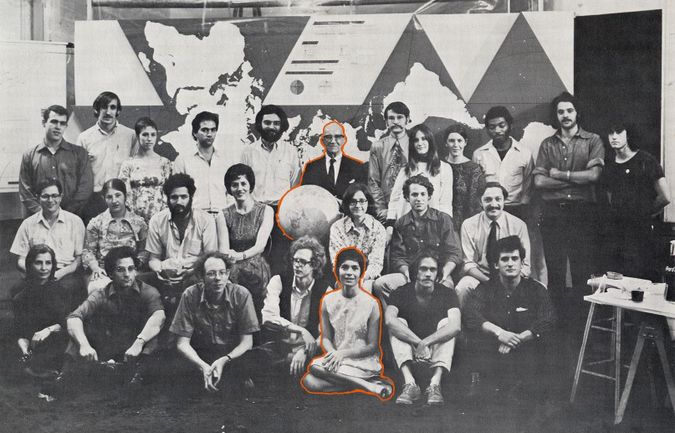 The creative pioneers selected for the 1969 World Game. Lehr and organizer Buckminster Fuller are highlighted. Image by Courtesy of Mira Lehr

Your exhibit “High Water Mark” does not pull punches in terms of its message on climate change. How do you think of that in terms of art delivering a message versus leaving space for interpretation?

Before, aesthetically it had to be right. Now it also has to be right with how I want people to react. It’s an alarm call to wake up and take care, cause we’re not going to have that much time to make things right. People are touched when they see it because I think they feel a sense of the beauty of the Earth. I don’t really know why, but they’re reacting to it more than they ever used to.

You’re based in Florida — and so is this exhibit. Your state is one of the more vulnerable ones we have.

Yes, we are vulnerable, and yes, the water is rising and sometimes it’s up on my lawn. The Everglades are challenged. It’s kind of a race. It happens here; it’ll happen other places. If I can affect some change it will be a dream come true. 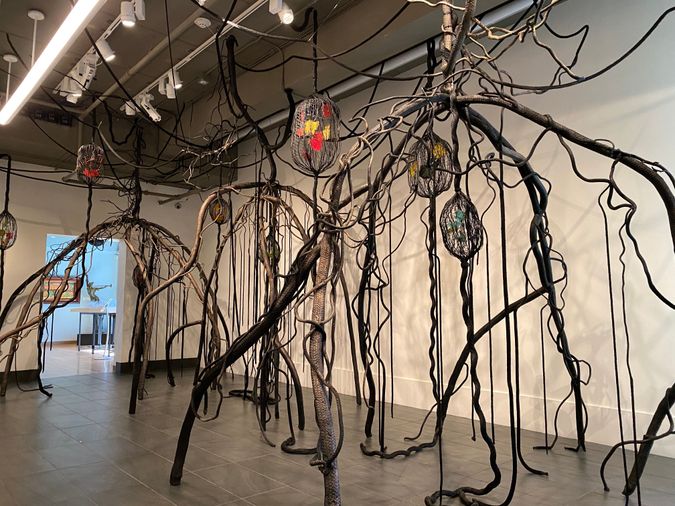 “Mangroves - The Protectors” made of rope, steel and dyed Japanese paper. Image by Courtesy of Mira Lehr

Some things have changed since when you started out in the art world in terms of women’s access. You played no small part in that change.

When I started, if you were an artist, and female and married with children, you might as well have kissed it goodbye because you were thought of as a dilettante and that stuck with you. I tried to help by starting a women’s gallery and art center. But it was really uphill. Today it’s quite amazing. I think some of the best artists in the world are women and they have an opportunity now. I think they still don’t make the same amount of money as a man does in the art world. But I see women taking hold and being in power positions now — things that are amazing. I never was a feminist in the sense of going out and marching or anything like that, but I always did feel concerned that we were given such a lack of attention and were never taken seriously. 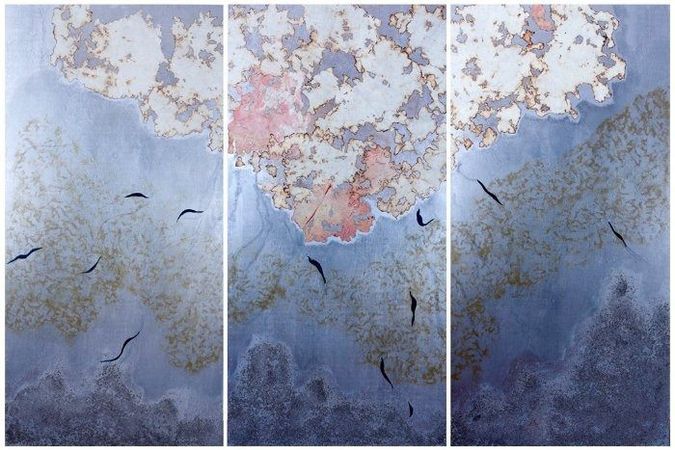 “Creation” (2018), one of Lehr’s triptych paintings made using ignited gunpowder. Image by Courtesy of Mira Lehr

Has your artistic process changed now that you’re stuck at home — I’m guessing you have a home studio?

My whole house, actually. I can’t really work in the same way because a lot of my work has to do with gunpowder and has to be done outside. It creates great, big mounds of smoke. I’m sketching. I’m getting ideas, but I’m not working full bloom. I can’t. But I think things will happen because my vision is changing a bit. I don’t know how this is all going to end up. Art is usually on the cusp of things and artists very often are visionaries. I’m waiting for the vision.

Artist Mira Lehr on Buckminster Fuller, the environment and blowing things up