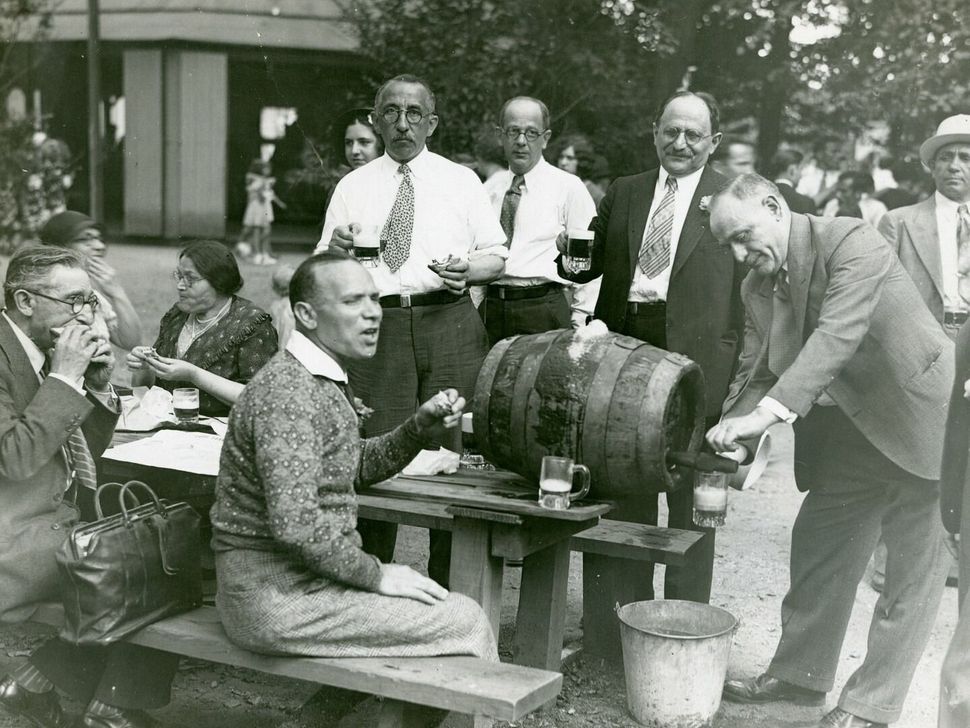 This piece originally appeared on the Urban Archivist.

Newspaper collections are not always the most impartial historical documents, but they provide a unique account of past events, both important and mundane, as primary resources. Since the vast majority of our partners’ collections are architecturally-focused, the two documentary-style newspaper collections that are available on our platform add new layers of texture and color to Urban Archive.

Those collections just so happen to be from The Brooklyn Daily Eagle (courtesy of the Brooklyn Collection) and The Forward, a 123-year-old independent media organization that continues its journey as the most significant Jewish voice in American journalism. Our team has learned so much from working with them in a short amount of time. So this week, we thought we’d tell you all about it by spotlighting our friend and archivist, Chana Pollack. Enjoy!

Urban Archive: Can you tell us a bit about your role as an archivist at The Forward?

Chana: I’m the archivist for The Forward, responsible for stewarding and creating accessible content based on the history of this 123-year-old independent Jewish media organization that continues its journey as the most significant Jewish voice in American journalism. As we’re a living, breathing news-making organism, my job frequently involves working with our writers who want to use archival newspaper stories in support of their contemporary pieces, as well as answering public queries, engaging with artists, scholars and cultural institutions looking to use our materials, and providing guidance to our online digitized back issues. We’re also still cataloging and organizing our collection. 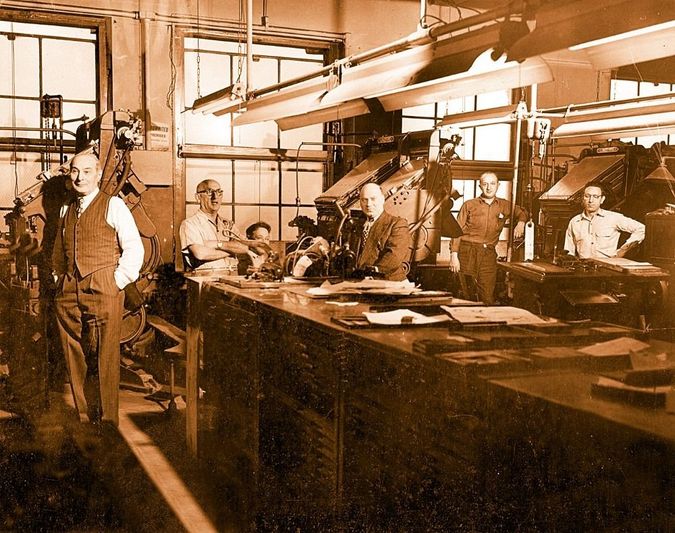 Our archives are primarily a photo collection (the newspaper’s ‘morgue’) that are a visual mapping of our journey, from woke socialist Yiddish newspaper to today’s digital journalism that continues reflecting the 21st-century American Jewish experience. Our archive also houses associated ephemera such as newspaper clippings, political cartoon art, administrative records, journalistic correspondence, printing materials such as the photo engraved metal press plates currently on exhibit, and my personal favorite: a slush pile of rejected manuscripts, some of which are handwritten. The Forward’s archive works in support of our constant reinvention while maintaining a deep sense of our history.

Urban Archive: How does the Forward leverage its own archive to tell stories — and what is involved in that process?

Chana: By considering the archives to be newsworthy, The Forward’s daily momentum includes archival responses to events. For instance, most recently, during the pandemic, we created stories about the 1918 influenza pandemic by raking through the back issues seeking out contemporary perspectives. One that stands out is when a popular downtown furniture shop, Deutsch Brothers, included good hygiene practice as part of their advertising copy! “Native advertising” in today’s parlance. We’ve also published two books based on our archival sources, “A Living Lens” in 2007 based on our photo archives, and again in 2016, “Have I Got A Story For You” based on some of the Yiddish fiction in our pages. Recently we’ve been publishing a cooking feature based on The Forward’s own Jewish American Cookbook published in 1946, which pulled from our original recipe columnist Regina Frischwasser and her recipe contest in the 1920s and ’30s. We gave our readers a contemporary take along with the historic provenance by having culinary historian Jane Ziegelman and the Forward’s senior food writer Liza Schoenfein respond to the archival recipes. 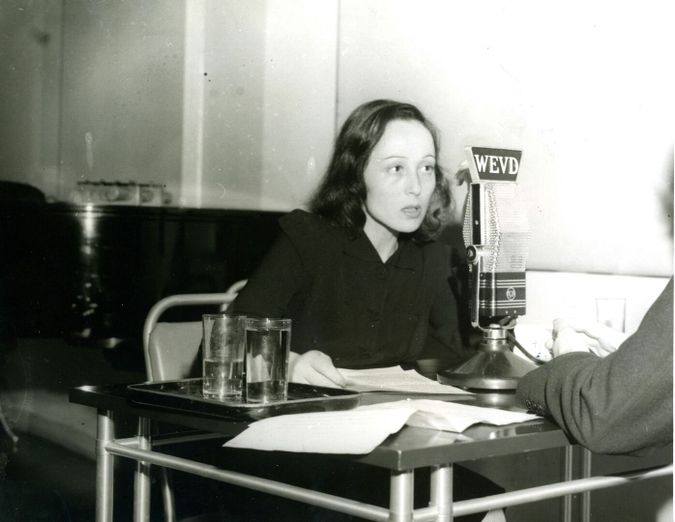 Rainer, sitting at a table, speaking into a WEVD microphone. Papers are on the table as well as two glasses of water. The arm of another person is visible on the right, across the table from Rainer. (12/8/40)

Typically, writers and editors will seek to include the archival perspective in their story development and pitches. It’s a very engaging creative practice where the archives respond to a story at its inception and usually get to be a part of that, all the way to publication. And it’s moving to know that our history, that those early Yiddish journalistic voices, continue to articulate contemporary issues. We’re also frequently called on to help express our identity with the development and marketing departments. That may involve engaging with our audiences’ memories of our paper, helping with videos, or just supporting the various virtual programs being created now.

Urban Archive: What has been your favorite story that you uncovered going through the Forward’s Archive?

Chana: No! Don’t make me choose! I’ve always been extremely blown away by the way we intuited the idea of audience engagement way back in time. We had one of the first advice columns starting in 1906 that ran for over eight decades and is back on our site — The Bintl Brief — and we provided space for the readership in our pages. I’m thinking of the pogroms, wars, and moments of great stress for our people when we published personal letters from Jewish soldiers on their hometown battlefields of the first world war, for example. Frequently they wrote from overseas to The Forward, seeking the help of their American relatives. We continued to provide this type of service, way past World War II, and people still write to us to tell us about these remarkable stories of family reunification. 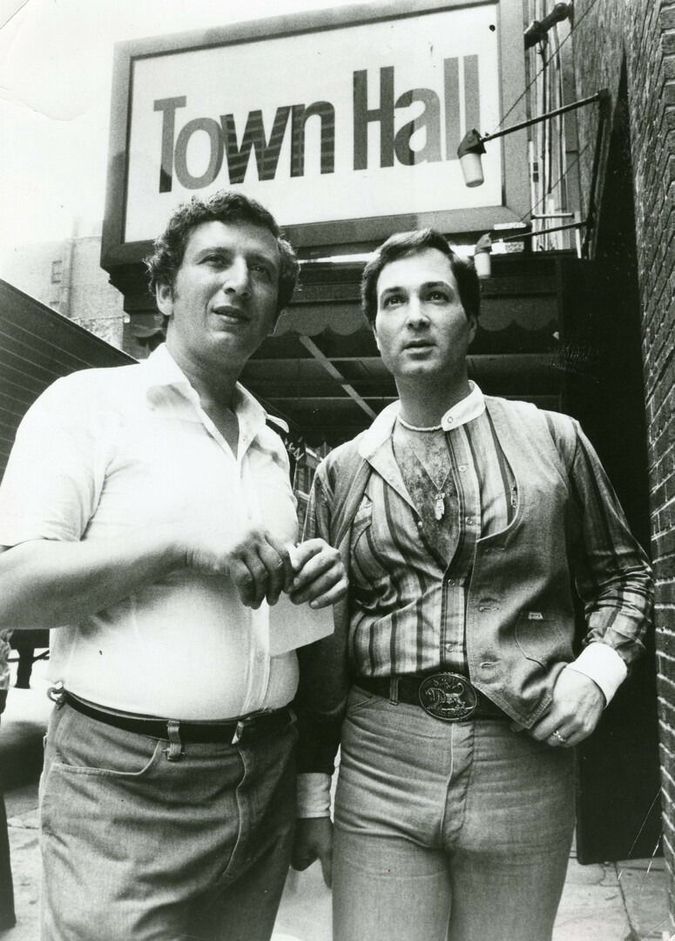 But, that said, I recall the day we uncovered Maurice Winograd’s photograph. He was the founding editor of our art section (commonly known as the ‘roto section’ for its rotogravure printing style). Without Winograd, there would be no archive. In the early 1920s, he was tasked with creating an illustrated Sunday art section for The Forward. He initiated our first bilingual English-Yiddish captioning for that section knowing that would draw in the next generation of Forward readers who were American born and native English speakers. Winograd’s image wasn’t fancy, you know? It was a simple studio portrait. Next to it we found a slim volume of his Yiddish poetry. And next to that there was another, later image of him. He had lost his youthful crown of hair by then and seemed as though he’d seen quite a few near missed deadlines by then. Flipping through his poems we were caught by the one he titled in English called: Still life. Later we learned that Isaac Bashevis Singer, the Nobel Prize-winning writer, and Forward journalist had dedicated his book “Crown of Feathers” to Winograd. Singer called Winograd a “gifted poet and a psychical researcher in his own fashion.” #archivist goals

Urban Archive: The Forward is a historic newspaper and available to both Yiddish & English speakers. Does the Forward’s political legacy or the bilingualism of the paper inform the nature of the work you do?

Chana: We continually engage and respond to our culture and history and our readers and that includes responding to our linguistic Yiddish heritage in the here and now. A good deal of our archival items typically require translation which we provide, as well as Yiddish and Jewish historical specific context. Our political legacy means our archive contains a good deal of material related to the early labor and socialist movements. Working in a news environment requires it to be accessible and contemporary and nimble. I’d say we delight in curating the archival alongside the now. Whatever that moment happens to be. 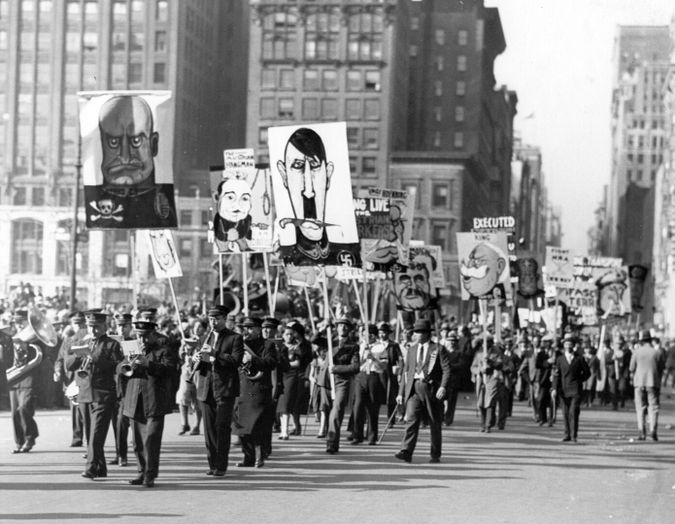 A scene in Madison Sq. (Lovestonite Communist). Marchers with placards. (Manhattan, 1934) Image by Unknown (courtesy of the Forward archives)

So when Elizabeth Warren chose to address the city from Washington Square Park while campaigning in 2019, we were asked to re-envision the moment from the perspective of the Triangle Shirtwaist Factory fire that took place nearby in 1911. Historically we wrote intensively about that story at the granular neighborhood level, entering the homes of those who had lost family members and friends to that fire. We also sent our leading poet of the day, Morris Rosenfeld to cover it. So our response in 2020, interweaving the archival with the voice of one of the imagined lost ones was more poetic than your usual Op-Ed. But for us, that was the archival bridging the now.

Urban Archive: Recently, you wrote a story about Kalmele Weitz, The Boy Cantor on Urban Archive. We found the entire process, from discovery and research to editorial, to be quite collaborative. Would you mind sharing what went into its making with our readers? 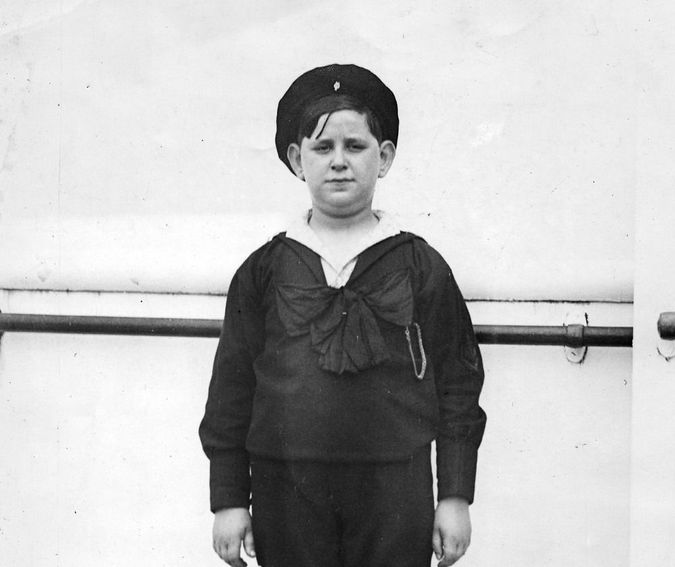 Kalman ‘Kalmele’ Weitz, known as “The Boy Cantor,” and ‘The Young Caruso.” Image by Unknown (courtesy of the Forward archives)

Chana: Cantors are like rock stars to our archive, but even so, to find an image of a ‘boy cantor’ is still quite thrilling. Usually, images of cantors in our archive are more akin to headshots for actors and singers. But here we had an image taken as the ‘boy cantor’ star of the day was disembarking from a ship — we could tell because we have a lot of similar images. Back when steamships were the airplane of the day, notable people were photographed by paparazzi (just like at LAX today!) as they were still on deck, about to disembark. So while we were thrilled by the celebratory factor, we were also kind of stumped about how to locate this individual whom we knew from our paper and the historic record had arrived in New York City in that image. I think you could call this episode ‘we get by with a little help from our friends.’

From Ellis Island’s database, we found Kalmele Weitz’s passenger manifest so we knew the name of his ship which is the S.S. Leviathan that curiously, happens to be a magical mystical sacred fish consumed by the righteous, in Jewish lore. Great. But uh-oh. Where did ships dock in 1928 in the city? Well, there’s only one person who we felt confident would know the answer to that query. We reached out to Martina Caruso, the deep-diving Director of Collections at the Seaport Museum who pointed out that the S.S Leviathan was such a large ship, it had to dock uniquely at Pier 86, despite the fact that it belonged to the U.S. Line whose ports were in Hoboken. Caruso also provided links to helpful related reference materials of the Hoboken Historical Society and even the Congressional Record of the day, where this was mentioned! Apparently switching ports is a big deal. And that’s how we were able to geolocate Kalmele Weitz at the moment of his arrival in our fair city.

Sam Addeo is a NY native and urbanist based in Greenpoint, Brooklyn.
Chana Pollack is the Forward’s archivist.