Crowds piled in to Washington Square Park in New York City’s shtetl of Greenwich Village Monday night to hear Senator Elizabeth Warren’s plan to set this country on a more just path. In outlining some of her anti-corruption ideals, listeners found the presidential candidate framing her contemporary governance wish-list within a historic context: The Triangle Shirtwaist Factory fire, long recognized as among the worst industrial disasters the city has faced — prior, of course, to 9/11.

The fire took the lives of 146 souls, mostly young women who were Jewish and Italian immigrants. It ravaged the Jewish community at the time, and The Forverts reported on the factory fire of 1911 with intimacy, grief and anger. We published portraits of grief on the front page, along with reporting from the scene and lists of the deceased. Forverts founding editor-in-chief, Ab Cahan sent the people’s poet, Morris Rosenfeld, to cover the fire.

And like Senator Warren in 2019, The Forverts called upon its readership to demand a change in governance in order to create a safe, equitable workplace in a more just country.

In summoning local Jewish immigrant labor history, and in her proposal that working folks still need an ally in the White House, the presidential candidate seemed to invoke the very words of Cahan. “The current government is led by men who are alien to the needs of the workers,” wrote Cahan. “Take part in political struggles, become owners of your trades, control them as much as possible and you will become the owners of your government, directing it as much as your power permits you.”

In invoking the Triangle Shirtwaist Factory fire, an episode that solidified Jewish socialist female power rising from the ashes of tragedy, Warren brought our history into today’s political debate. 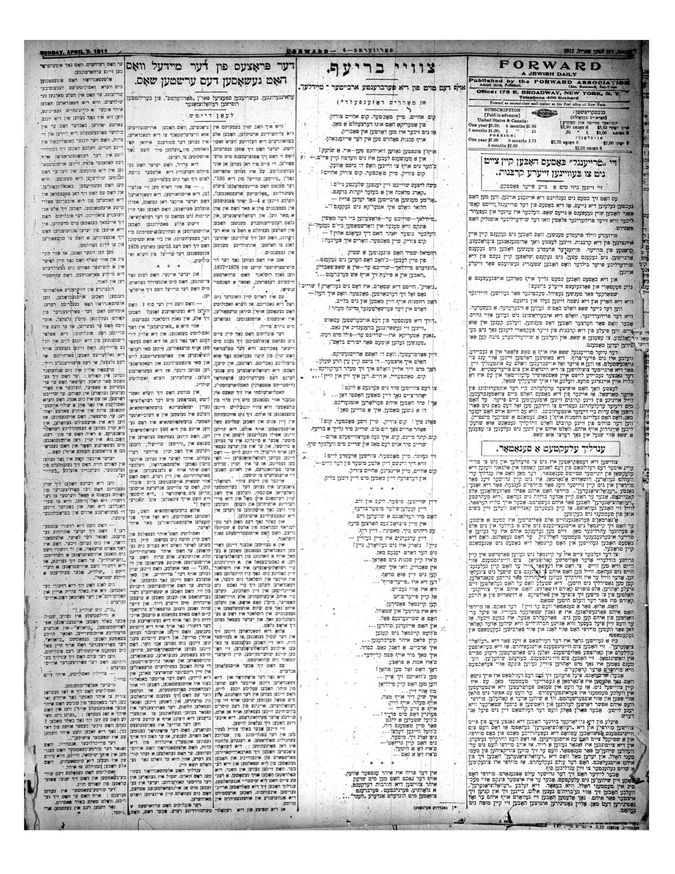 That history is still part of us. And it’s still part of you, our readers. Once upon a time, fire engines were equipped with neither ladders nor hoses of any critical length. Factory buildings had long outpaced them.

And once upon a time, dear reader, you too were fresh off the boat, new to the English language and desperately seeking employment. In your spare moments away from the sweatshop, you wrote letters back home filled with the details of your new life in New York City and also with money to support the ones you left behind.

From a friend or a relative or maybe the woman in whose tenement you boarded, you heard of one of the better paying gigs in town, a bit of a walk from your Lower East Side or Little Italy ‘hood, but still, below 14th Street so not that far away.

And you put yourself out there and were accepted to work at the Triangle Shirtwaist Factory where, rumor had it, the pay was just a bit better. And the product, so elegant and recently advertised in your Forverts newspaper! 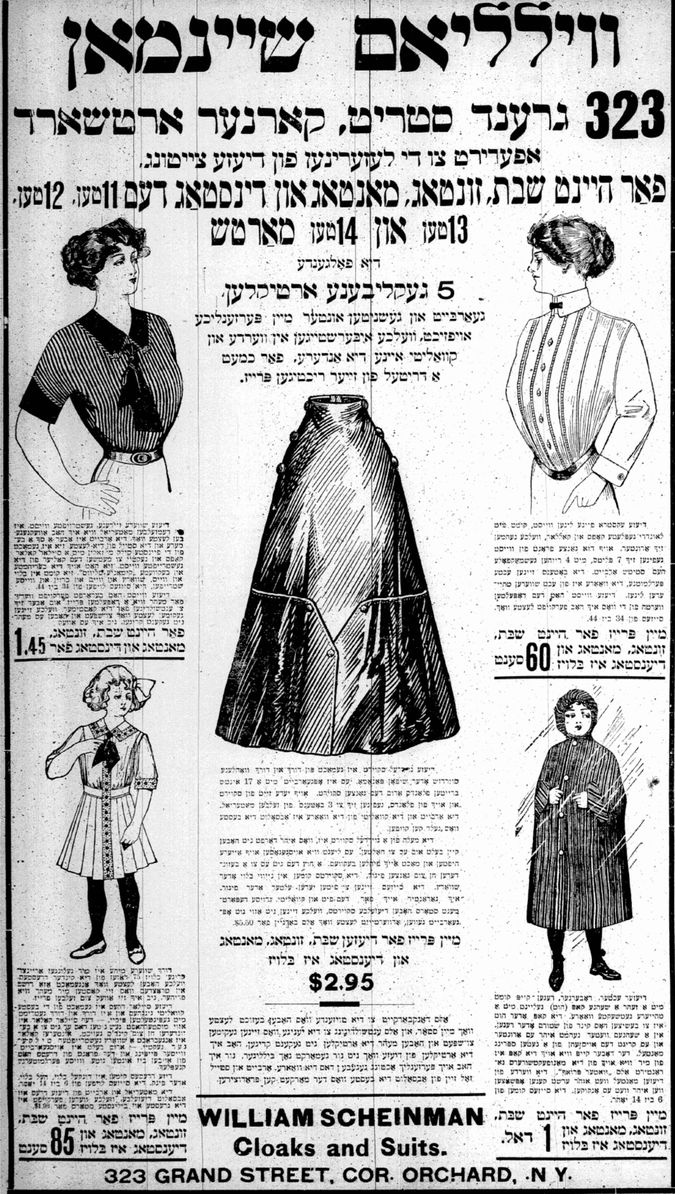 Ad in the Forverts Image by Forward Archives

And such a deal at various shops around town. Even you, who made them, could afford to wear one. You were young and energetic and your family depended on you for the basics. Over a century later, when a sister, a composer, would seek out your stories to memorialize the tragedy of your death in the factory’s wild flames—we would cherish these faintest delicate details of your life and the masterpiece of a tribute created and performed uptown, for all to hear.

A filmmaker would get interested too, and come to our archives at your Forverts newspaper to learn about the story of the Triangle Shirtwaist Factory fire, of locked doors and narrow decrepit stairways and of greedy capitalist bosses. Arising out of the generations of women born here since your murderous death, an activist would design chalk-drawing memorials for you in the neighborhood.

We remember your names, Yetta and Gussie and Jennie and Sam. Becky and Dora and Sara and Tessie. Pauline, Fanny and Rebecca — you were our nekstdorkes, our neighbors.

And then suddenly, you were our newspaper’s front page. 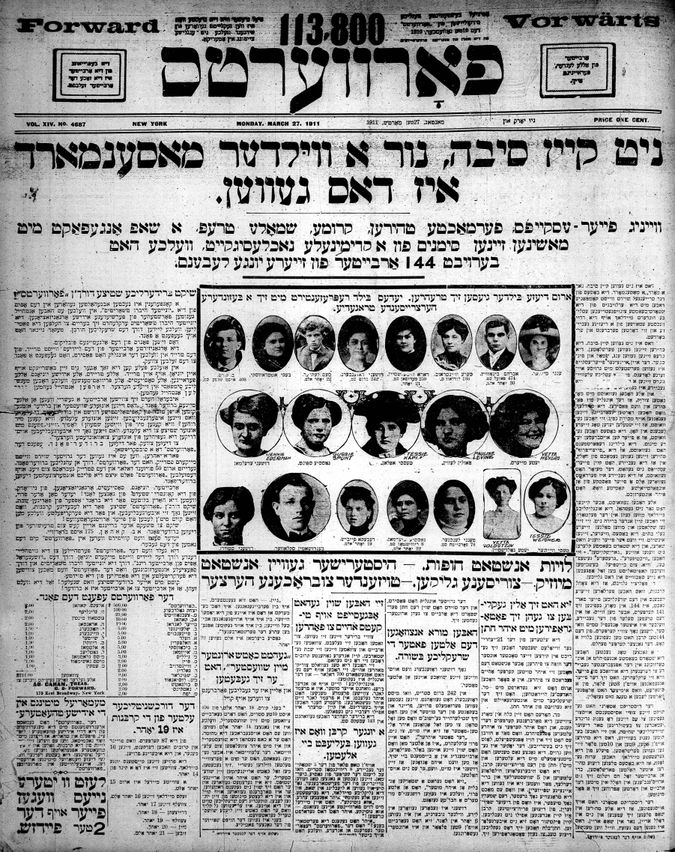 Front page, with portraits of grief Image by Forward Archives

Over a century later, in your neighborhood, shouting “People Power!” with a fist raised high, Maurice Mitchell, Working Families Party National Director acknowledged the growth of his party, which might be your party, as it claimed roots in this town.

“New York will always be home for us,” he said while outlining the hard work of organizing — the horevanye, the toil, the slogging through — that his party is doing to build out a nationwide platform for voices of the underserved and underpaid. And that’s how today’s working folks announced their support for Elizabeth Warren’s candidacy.

And then, in your city, right near your factory, your tomb, a sister, a politician, remembered you to us.

Gazing over her podium through her wire-rimmed glasses, with her kleyder, her simple outfits, her scholarly demeanor, and her industrious plans, Senator Elizabeth Warren stood up for the workingwoman and man. Elizabeth Warren remembered Yetta and Becky and Jennie and Tessie and Dora and Sara and Sam and Benjamin. Elizabeth Warren knew she was standing on sacred ground.

She wasted no time with the usual platitudes, I never expected to get into politics and so forth. Instead, she promised the working folks that when she wins, we would have a voice in the White House.

Most importantly, she said we were all here because of some hard working women: the women workers of the Triangle Shirtwaist Factory.

She knew you had been caught in the fire right across from the park where she now stood. She knows. Zi veyst, zi veyst. She knew you’d raced to escape but were caught in a firetrap of a building. She knew that there were sisters in there as young as fourteen years of age. She knew you’d had to jump out the windows. Elizabeth Warren knows you died on impact and lay on the ground bloodied and hard to later identify.

And she knows it took only 18 minutes for you to die. And she said, it was no surprise, because for years, despite all your protests and strikes about the horrid factory conditions — nobody listened. Nothing was done. There were no plans to change conditions. Owners lobbied the legislature and nothing changed.

We remember you, Tessie and Sara and Jenny and Becky and Gussie and Yetta and Sam and Benjamin. We remember you. And so does Elizabeth Warren.

Chana Pollack is the Archivist for the Forward.