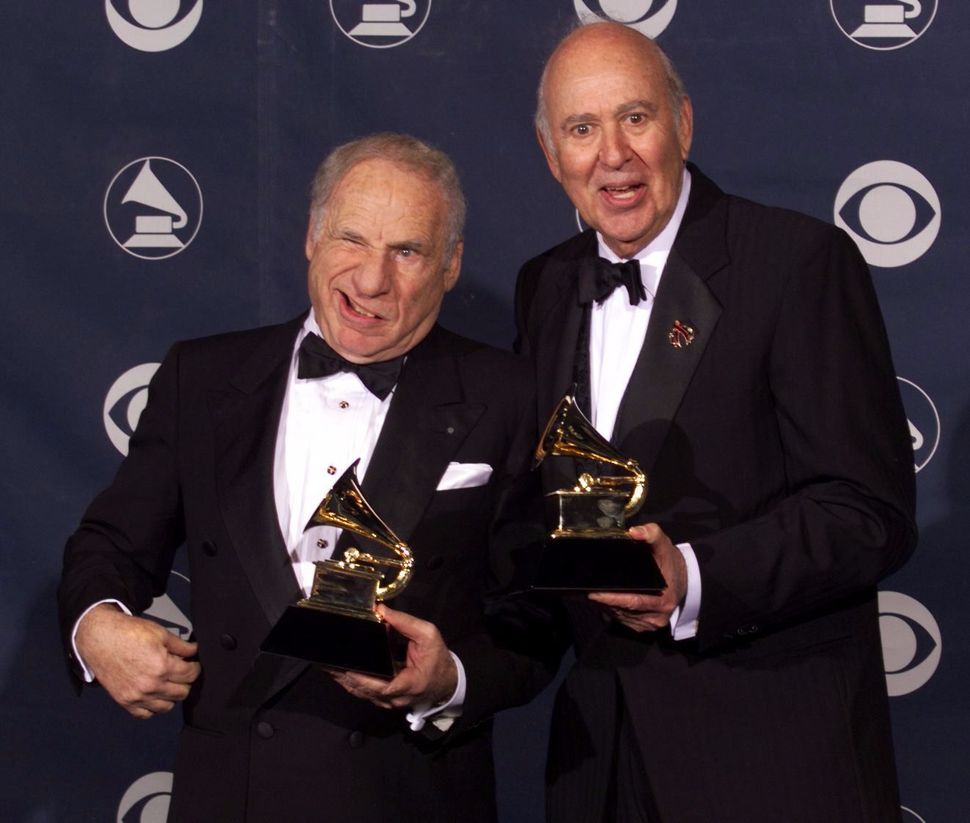 “My secretaries stay a long time,” Carl Reiner said as he greeted me at the start of the job interview, “so I don’t know what I’m supposed to ask.”

Okay, I was plotzing to get the job. Though at 26 I’d worked in show business long enough to know that celebrities were often nothing like their public personae, from seeing him on talk shows, I’d felt sure he was the real deal, and I was right.

His office was unadorned. There were no Emmys reminding visitors that he’d created “The Dick Van Dyke Show,” no pictures of him with Mel Brooks, his partner in the hilarious “2,000-Year-Old Man” routines. Five years out of college, I’d had bosses who’d spoken to me only to say, “Don’t ever put me on the phone with a secretary,” and was desperate to work for a mentsh. I knew that was Carl even before he ended the interview by joking, “I have to interview some relatives, but you’ll hear from me soon.”

Two frantic days of fressing later, he called to say, “Welcome aboard.” I was immediately comfortable with him. We shared a love of Jewish culture, food and humor. My feeling for Yiddishkeit was rooted in my father having brought over performers from New York’s Second Avenue and producing shows in Winnipeg, where we lived when I was young. Menashe Skulnik, the only comic, was my favorite.

Carl was the next generation funny man — born in America, well=known and making a good living. In 1968, when I started working for him, comedy was seriously Jewish, whether performers or writers. Instead of paying to sit in an audience and laugh, I was being paid while in an office filled with hilarious men. If Carl used his fame, it wasn’t to get a table in a restaurant, but to support left wing candidates and civil rights.

I knew I’d love Carl’s anecdotes, but he also enjoyed mine, coaxing me to repeat his favorite, about our having had only a Jewish newspaper in the house. If I wanted to know what was on television, my mother would read off, “Vie Die Velt Dreht” (“As the World Turns”), “Shadchen Shpiel” (“The Dating Game”) and “Farlostzach af Beaver” (“Leave it to Beaver”). One morning he came into the office, eager to tell me, “There’s no one on the street in Beverly Hills at eight in the morning so I opened the front door and went out to pick up the paper. ‘Look to your right and you’ll see Carl Reiner’, I heard someone say,” he laughed. “Everyone on the tour bus was staring at me in my pajamas.”

That kind of embarrassing incident might have turned up in a script as he drew on life for stories. Another was when he mistakenly went to his Bronx high school a day before he was scheduled to speak there. He called the office, whispering, “I’m trying to sneak out of here before anyone sees me.” From Carl, I came to understand that foibles and flaws are what make us unique.

A feminist long before the word became popular, In the early 60’s, when he created “The Dick Van Dyke Show,” he had the actress Rose Marie play a comedy writer though it would have been almost impossible to find a woman in the field. Carl was unique, probably the only star who directed movies, won 12 Emmys and made kasha varnishkes. The previous sentence is an example of something I learned from him – that the formula for constructing a joke is to combine three things with the last being a surprise.

I’d adored Carl’s wife Estelle and his three kids, and felt more like family than an employee. His daughter Annie and I have remained best friends. I imagined I’d work for him forever, but the Women’s Movement came along, insisting we were entitled to the same jobs as men. Flailing around in search of an emergency career, one night while watching television with a girlfriend, I blurted out, “Maybe we can write a script?” I knew the format and in the five and a half years I’d worked for Carl, I’d learned that interesting characters and stories were the starting point with jokes coming later. I’d heard Carl encourage writers to draw on their own lives. I also saw that you had to risk failing in order to pursue success.

In 1973 comedy was written by guys named Arnie, Bernie and Mel, making it ludicrous for two girls to try to break into the field. “We have nothing to lose,” I pointed out to my girlfriend and she agreed to try. Carl read our script and shocked us by asking us to write an episode of “The New Dick Van Dyke Show,” the series he was producing. That went way beyond my loftiest expectation.

That night Carl’s son Rob was having a party. When he opened the door, I jumped up and down, telling him, “I’m a writer!” Looking past him at the others, I said, “I feel foolish. Everyone here is a writer.”

His prediction came true all too soon, when I overheard Carl on the phone telling Hope Lange, who played Dick’s wife, “Sybil and her friend are doing a script. If it’s not good, I’ll fix it.” That added to my fear of disappointing him. Anxious and lacking confidence, we worked nights and weekends. Sitcom writers were told to “write Yiddish, cast British.” It referred to the cadence of the jokes, not that Dick Van Dyke should say, “Oy gevalt” or eat tsimmes. After reading our final draft, Carl handed it back to me and said, “Make copies and distribute them to the cast.”

“Aren’t you going to rewrite it?” I asked. He’d done that with every other script.

“It’s fine,” he answered, astonishing me. This couldn’t really be happening.

Being at the table reading, where the actors first say the dialogue was exciting, as was watching them rehearse. I was pumped by Dick telling me backstage, “This is the best episode we’ve done.” But nothing compared to the thrill of hearing the studio audience react at the taping. This was the Bat Mitzvah I’d never had, an initiation into adulthood, and my parents, kvelling in the bleachers, didn’t have to pay for it. The applause at the end went on so long, I thought I was hallucinating until I realized the place was filled with my friends and family.

I was reluctant to leave the boss I adored and didn’t until my writing partner and I were being flown to New York – our first time in first class — to New York to see Jane Alexander, the actress whose series we’d been hired to create. Carl and I remained friends for over 50 years. Shortly before his 97th birthday, I was in LA. Though his hearing aid was on the fritz and he could barely make out was I was saying, I shouted at him, “I don’t know what my life would have been without you.” He could have charged tuition for the education I got from him, which made it possible for me to become a TV writer and be included in the 2006 book by Barbara Love, “Feminists Who Changed America, 1963-1975.”

It’s hard to accept that the man who made such a dramatic – and comedic – impact on my life is gone. I’m wondering if I’ll still have my favorite recurring dream, where I pick up the phone and say, “Carl Reiner’s office.”

Sybil Adelman Sage has worked as a writer for “The New Dick Van Dyke Show” and “Northern Exposure,” among other television shows.