McCarthy was anti-Communist. Was he also anti-Semitic? 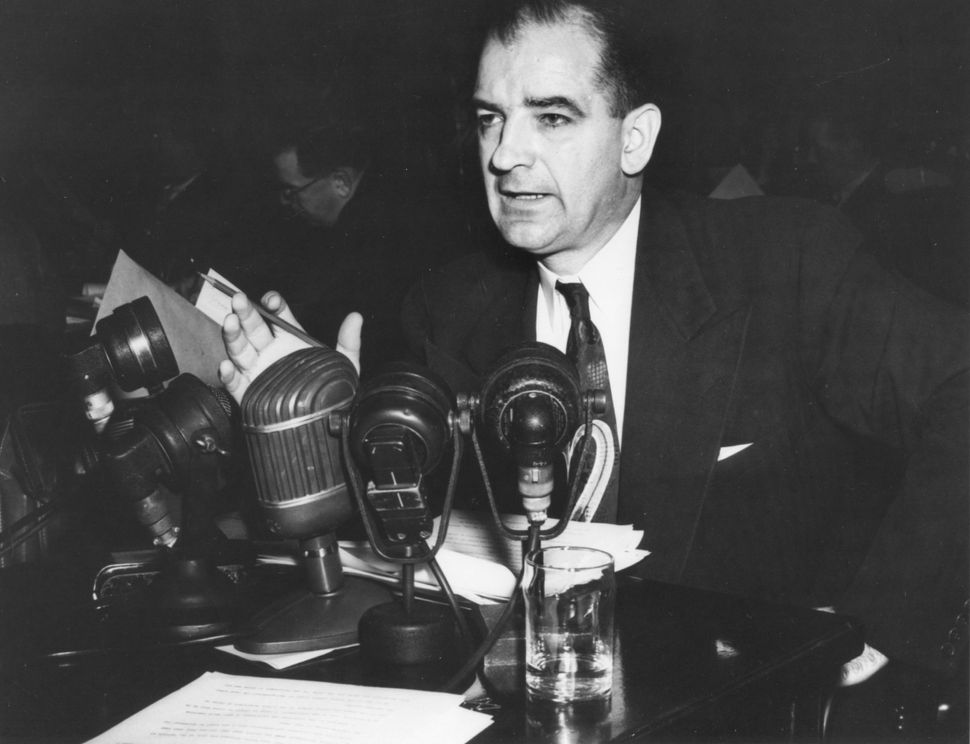 Was the anti-Communist Senator Joe McCarthy also an anti-Semite?

That question assumes new resonance in this era of spiraling xenophobia. And there’s fresh evidence in the Wisconsin lawmaker’s personal and professional papers, which I was the first person to gain access to as part of researching my book, “Demagogue: The Life and Long Shadow of Senator Joe McCarthy,” which was published on Tuesday.

Any assessment of McCarthy’s attitudes towards Jews has to begin in 1950, as he was launching the Red-baiting crusade that would turn his name into an ism.

One of his first targets, Anna Rosenberg, was such a star when she worked for the War Manpower Commission during World War II that General Eisenhower made her the first female recipient of the Medal of Freedom and President Truman bestowed a Medal for Merit. When the Korean War was gearing up, Secretary of Defense George Marshall tapped Rosenberg to find the troops needed to fight there, protect Europe, and safeguard the homefront. Never had the Defense Department offered such an influential posting to a woman — never mind a Hungarian-born, liberal-leaning Jewish woman.

Within a day, a chorus had formed to oppose her nomination, uniting critics of the New Deal, the Fair Deal, racial desegregation, Zionism, and the Nuremberg verdicts. It wasn’t just her gender and politics that enraged them, but the conviction that anyone named Rosenberg ipso facto was a Soviet spy.

McCarthy was already acquainted with this nefarious crowd, some of whom denied Jesus Christ had been Jewish. As early as 1946, the senator had heard about Gerald L.K. Smith, who would later warn his followers to “keep the Zionist Jew Anna Rosenberg from becoming the dictator of the Pentagon.” He met early on and seemed impressed with the Holocaust-denying Ku Klux Klansman Wesley Swift, who would later instruct congregants of his Church of Jesus Christ-Christian that Rosenberg was not merely a “Jewess” but “an alien from Budapest with Socialistic ideas.”

While he was an instinctual people person, McCarthy was an increasingly indiscriminate judge of character. He listened to a callow staff eager to please him and a coterie of professional anti-Communists out for scalps, rather than to the Republicans on the Armed Service Committee who joined Democrats in unanimously approving Rosenberg’s nomination. In the end, McCarthy was forced to do an about-face, joining the overwhelming majority of senators who confirmed her by a voice vote.

Was his attack on Rosenberg driven by anti-Semitism? The Senator’s own words over the years offer grist for that theory, as even his closest friends acknowledged in interviews. He’d referred to his own lawyer as “a Hebe,” A Jewish businessman he suspected of cheating him was “a little sheeny,” another anti-Jewish slur. Years later, according to Army General Counsel John Adams, he repeatedly called a staffer he disdained “a miserable little Jew.”

Then there was the backing McCarthy got from notorious Jew-haters like Smith, founder of the America First Party, and the backing he gave William Dudley Pelley, the fascist activist and writer. McCarthy liked to shock friends by pulling out his copy of Hitler’s “Mein Kampf,” calling it inspirational or saying “that’s the way to do it.”

Religious bigotry resurfaced as an issue in 1953, when McCarthy went after what he said were spies in the U.S. Army generally, and especially at a Signal Corps facility in New Jersey. Forty-one of the 45 civilians suspended at Fort Monmouth were Jews, or 95%, whereas 25% of its overall civilian workforce was Jewish, according to the Anti-Defamation League, which urged the Army secretary to do a full-fledged study of possible prejudice. Nearly all those targeted by McCarthy would be reinstated, but not before their lives were upended and they were left to wonder why.

“There is an assumption,” said Allen Lovenstein, a Jewish engineer at the fort, “that there is an anti-Semitic movement.”

Interestingly, Senator McCarthy generally did not lash out against higher-profile Jews, such as Albert Einstein — at least not in public. Among his papers, I found a never-delivered draft of a speech about Einstein, the Nobel Laureate in Physics who was also an avowed Socialist, a pacifist and gay rights advocate, a Jewish-German refugee, and a sufficient worry to the FBI that it kept a 1,449-page file on him.

“I don’t challenge the legal right of Professor Einstein to be a Communist, a fellow traveler, or just a plain political dope,” McCarthy wrote in the draft dated October 1950. “Albert Einstein is one of the great scientific geniuses of all time. On the other hand, it is clear that Albert Einstein has grossly abused the privileges which he has been accorded by the gift of American citizenship.”

The text, which was crossed out with a dark pencil and a pink note saying “Cut from Atomic Scientists’ Speech,” claimed Einstein had “been affiliated with not less than 27 Communist-front organizations,” and ended with this line of poetic vituperation: “The clichés of the rabble-rousing soapbox Socialist pour from his pen as easily as his cosmic equations.”

Did he hold back for fear of being accused again of being anti-Jewish, or because an adviser cautioned temperance when it came to the revered genius? The Senator’s papers do not explain.

The truth is that there is evidence on both sides of the was-he-or-wasn’t-he anti-Semitic question, much the way there is today with the divide over how to balance President Donald Trump’s embrace of anti-Semites with his strong support of Israel and closeness to Orthodox Jews (including his daughter and son-in-law). McCarthy had Jewish friends as well as aides, and he boosted Israel while decrying Soviet suppression of Jews. Agnes Waters, a notorious xenophobe, went so far as to accuse the senator of being a “crypto-Jew” and saying McCarthy was a pseudonym used to disguise his Jewish surname.

What’s clear, however, is that McCarthy’s reckless accusations and trampling of witnesses’ rights were offensive to age-old Jewish values, with or without overt anti-Semitism. That’s easy to say in hindsight, but was also the verdict of Jewish Americans at the time. They were the one religious group that consistently and overwhelmingly rejected McCarthy, with 15% viewing him favorably and 71% unfavorably.

Einstein captured that Jewish outrage better than anyone. “America,” he wrote, “is incomparably less endangered by its own Communists than by the hysterical hunt for the few Communists that are here.” And he advised colleagues called to testify before legislative panels probing communism to refuse, even if it meant “jail and economic ruin.”

Larry Tye, a longtime reporter for the Boston Globe, is the author of eight books, including the just-published “Demagogue: The Life and Long Shadow of Senator Joe McCarthy.”

McCarthy was anti-Communist. Was he also anti-Semitic?