The Forgotten Jewish Composer Who Was McCarthy’s First Victim 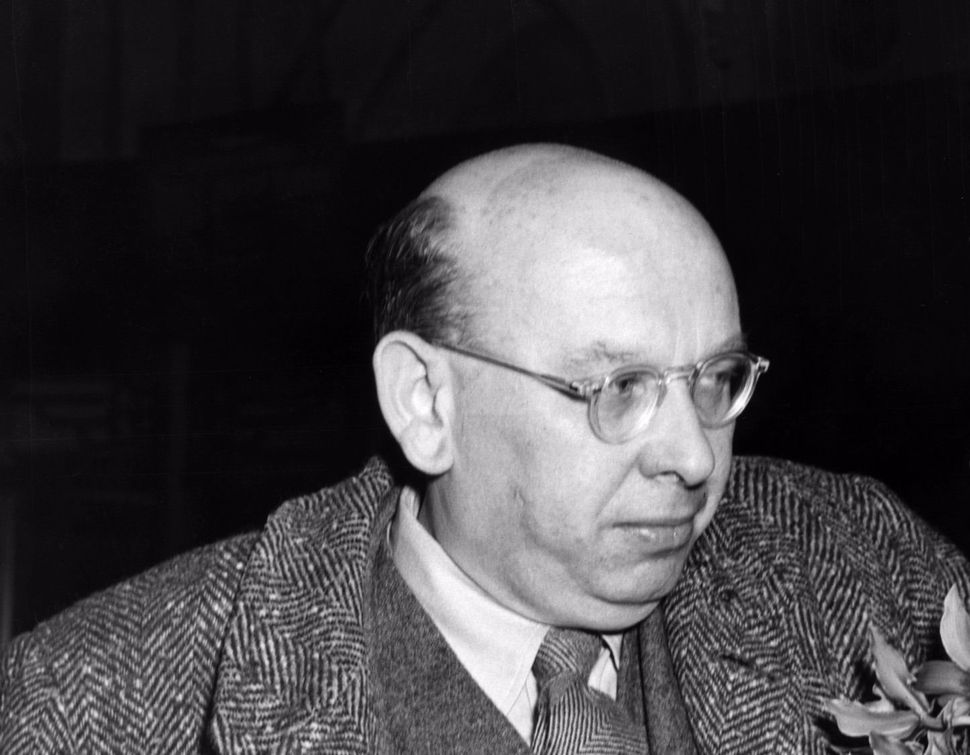 The composer Hanns Eisler was once called “the Karl Marx of Communism in the musical field” by House of Un-American Activities chief investigator Robert Stripling. That description might be an overstatement, but not by much.

Eisler scored some of the most pivotal moments of the first part of the 20th century. His populist anthems were sung at the barricades in France during a fascist putsch in 1934, on the frontlines in the Spanish Civil War in 1937 and at the birth of East Germany in the 1940s. As a composer for film, his instrumental music was the soundtrack for the first documentary to uncover the barbarity of the Holocaust, Alain Resnais’ “Night and Fog.”

For all of Eisler’s contributions, his two Oscar nominations and his notable collaborations with playwright Bertolt Brecht and director Fritz Lang, he’s an obscure figure outside Germany today. Alex Brown, writing for Jacobin, reports that Eisler’s legacy in the United States, where he lived for many years, has been dampened, primarily due to an FBI inquiry and HUAC investigation that ended with his expulsion from the country.

Eisler was born in 1898 in Liepzig to an Austrian Jewish father and a Christian German mother. He grew up in his father’s native Vienna. His father, a professor of philosophy, sometimes took extra work as an editor and translator; his mother was a maid from a working class background. Both were amateur musicians and, though Eisler had no formal musical training until he was in his early 20s, he composed his first work at the age of 10.

In 1916, Eisler was drafted into service as part of the Austro-Hungarian army in World War II. Because he was affiliated with a socialist youth group, his officers referred to him as “politically unreliable,” and transferred him to a Hungarian-speaking unit on the Eastern Front. His superiors thought with the buffer of a language barrier Eisler wouldn’t be able to agitate the troops. But throughout the war he continued to compose, writing the now-lost pacifist work “Gegen den Krieg” (“Against the War”).

When the war was over Eisler enrolled in the New Vienna Conservatory to study composition under Karl Wiegl. He eventually left the Conservatory to begin private lessons with the renowned Expressionist Arnold Schoenberg. As James Wierzbicki notes in “Music & Politics,” Schoenberg managed to get much of Eisler’s output published, but Eisler eventually chaffed at the mannered culture of his mentor’s milieu in Vienna, and particularly at what he saw as a lack of concern for a historical and political context in Schoenberg’s recent turn to atonal music. In 1925, Eisler left for Berlin.

In Germany he wrote chorales for workers’ choirs, including Das Rote Sprachrohr (The Red Megaphone) a well-known Communist ensemble. In 1926, the same year he joined the Communist Party of Germany, he met Brecht. Those developments would shape his future both in the Rhineland and overseas.

“Eisler was exactly the right composer for Brecht’s mature poetic style,” wrote Brecht translator John Willett in his essay “Brecht and Eisler.” Eisler, Willett noted, “used his gifts like Brecht himself to make the meaning simple and clear.” In addition to his direct collaborations with Brecht, Eisler used text from the writer’s poems in over 100 compositions.

When fascism emerged as a force in Germany in 1929, Brecht and Eisler worked together on the Communist propaganda film “Kuhle Wampe” (“Who Owns the World”); they also brought songs of resistance to communist bars and clubs in Berlin. The neighborhood of Wedding, a communist enclave, provided the basis for one of Eisler’s famous call-to-action march “Rotter Wedding” (“Red Wedding”). Eisler fled to Paris in 1933, and in February 1934 became aware of his song’s international reach: joining protestors resisting a Fascist anti-parliamentary demonstration, he heard the crowd singing his melody with French words.

While in France, Eisler supported himself by composing for a number of small films. He and Brecht were also commissioned to write “Einheitsfrontlied” (“Song of the United Front”) for the international alliance of Communist Parties, the Comintern. But in 1937, Eisler’s music moved to a revolutionary arena. Enlisting with the International Brigades in the Spanish Civil War in Madrid, Eisler composed songs for the volunteer regiments battling General Francisco Franco’s fascist army, sometimes conducting concerts of the new songs the same night he composed them.

In 1938 Eisler received a temporary visa to America. Within a couple of years, his past associations with Communism flagged his residency to the U.S. Government, which worked to arrest and deport him back to Europe. The order came in 1940; for Eisler, a Communist and a Jew, it spelled almost-certain death. He fled to Mexico. That same year he was able to secure a permanent U.S visa courtesy of an official in Mexicali. The official was evidently unaware of his political ties.

By 1942 he was in Los Angeles, working with Brecht on Fritz Lang’s “Hangmen Also Die!” which garnered him his first Oscar nomination. His second came in 1944, for “None But the Lonely Heart,” written and directed by the socialist playwright Clifford Odets. Likely because of his success, he caught the attention of J. Edgar Hoover in 1946. Eisler’s subsequent monitoring by the FBI led to an over 600-page dossier on his activities, and in 1947 he was questioned by HUAC. Eisler’s interview with the committee was one of the first sorties in its brutal campaign against Hollywood and resulted in his forced removal from the United States in 1948.

Eisler briefly returned to Austria, but eventually resettled in East Berlin. There, he reconnected with Brecht and wrote the national anthem for the German Democratic Republic.

He was shattered by the 1956 death of Brecht, who was only five months his senior. By 1958, he completed his magnum opus “Deutsche Sinfonie” (“German Symphony”), which used Brecht’s words to evoke concentration camps and the guilt of Nazi soldiers. Running throughout the composition is a theme both he and Brecht held dear: The indictment of social conditions and class that lead men to evil.

Eisler died in 1962, leaving behind a large catalogue of work, much of which still serves as the soundtrack for antifascist and socialist demonstrations today. Yet Eisler never saw himself as an ideologue. When questioned by HUAC, he refused to link himself with communists whom he described in his testimony as “heroes.” “I am not a hero,” Eisler stated. “I am a composer.”

The Forgotten Jewish Composer Who Was McCarthy’s First Victim