From a July 6, 1924 edition of the Forverts. A pickle pushcart on the Lower East Side. Image by From the Forward archive

Toward the end of the new Seth Rogen comedy, “An American Pickle,” time-displaced pickler Herschel Greenbaum’s millennial great-grandson informs him that Brooklyn hipsters are pickling watermelon.

“They pickle fruit these days?” says Herschel, who spent a century salinating in a pickle vat before being revived in 2019. “Just when I think I figure it out, you throw a pickled watermelon at me.”

In truth, of all the many curve balls Herschel encounters after his debrining (Twitter, interracial couples, electric scooters), this wouldn’t be one of them. The Jewish immigrants of the early 20th century pickled everything — including that sweet summer fruit.

“All different kinds of things were pickled,” said Jane Ziegelman, food writer and author of the book “97 Orchard: An Edible History of Five Immigrant Families.” “It was cucumbers, every kind of vegetable you can imagine from eggplant to mushrooms. Whole cabbages were pickled. Fruits were pickled — apples were pickled, watermelons were pickled. And these pickle stands were sort of out on the streets for uptowners — meaning non-Lower East Side residents — to view.”

Those non-Lower East Siders (likely non-Jews) developed an association still attached to American Jewry. We love pickles, even if we didn’t bring them to the United States. 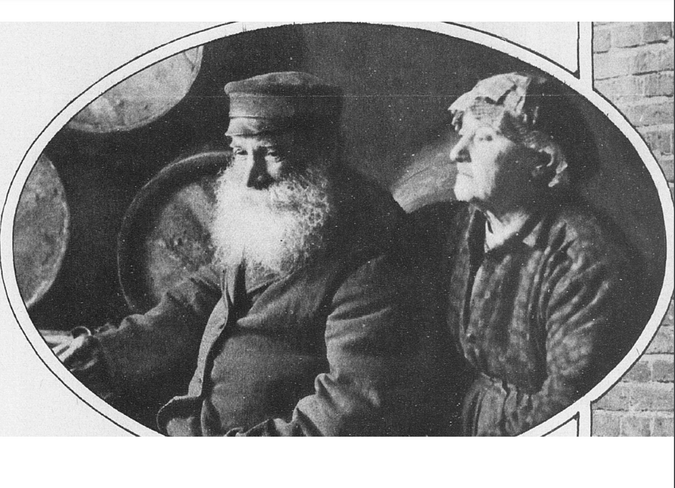 From a May 9, 1926 edition of the Forverts. Original caption, translated by Chana Pollack: “A sweet living from sour things. Moyshe Dantsiger and his wife in Radom, Poland are nearly 190 years old, combined. They’re still happy together and though his profession is shoemaker, he makes his living by sour pickles.” Image by From the Forward archive

Some of the first pickle popularizers to arrive in New York were the German immigrants of the mid-19th century, whose pickles, served in German delicatessens, were quite a bit different than the Jewish or kosher pickle from Eastern Europe. The Eastern European pickle was fermented in salt water with dill and garlic, whereas the German pickle used a vinegar brine. Jews hawking their sundry, tenement-made pickled items from pushcarts along Orchard and Division Street brought a new flavor with them. And with it: scandal.

“The pickle was kind of the poster child of ‘highly-seasoned’ food and was considered a health threat,” Ziegelman said.

As Ziegelman detailed in a 2011 piece in The New York Times on pickle moral panic, the supreme pungency of this new kind of pickle raised the eyebrows of Dr. Susanna Way Dodds, a proponent of “natural hygiene,” who railed against the “bad” spices and the “rotten” process of pickling.

“The poor little innocent cucumber,” Dodds wrote in the late 19th century, “if it had very little ‘character’ in the beginning, must now fall into the ranks of the ‘totally depraved.’”

Nurses and charity workers were particularly appalled to see young children in the Village, who would regularly buy the super-affordable snack with their pocket money. Those in favor of temperance saw pickles as a gateway vice for kids too young to drink, and some nutritional books grouped pickles as a “stimulant” alongside tobacco and whiskey. Not until some time in the mid-century when Jewish delis had gained mainstream legitimacy, did the stigma began to lift.

But, despite its non-Jewish detractors, the pickle was an undeniable part of the immigrant Jewish experience, and one that occasionally made headlines in the Forverts.

In 1914, for example, at the intersection of Hester and Allen Street, a pickle manufacturer named Yank, “whose half-sours were considered delectable,” prompted a scene when he reportedly failed to give change to a young girl. The headline read “Riot On Hester Street Over A Sour Pickle.” Perhaps it was a slow news day.

Other misbehavior in pickling came courtesy of non-Jews, including an Albanian cannibal priest tried for murdering a girl and pickling her remains and a Baltimore teen who murdered and then “pickled” his employer in alcohol. (These macabre instances, in some ways, anticipate Herschel’s non-fatal 100-year-pickling.)

From a December 11, 1927 edition of the Forverts. Caption: “Tried for cannibalism.—Father Nicholas, a priest of Albania, is being tried on charge of cutting up and pickling a girl, selling part of her flesh and eating the rest.” Image by From the Forward archives 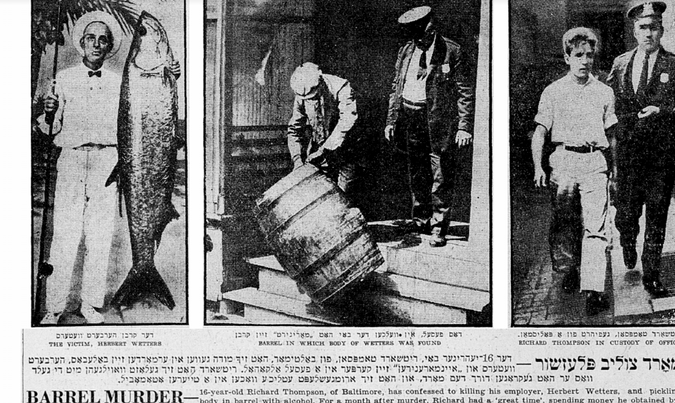 From a September 6, 1930 edition of the Forverts. Caption: “16-year-old Richard Thompson, of Baltimore, has confessed to killing his employer, Herbert Wetters, and pickling his body in barrel with alcohol. For a month after the murder, Richard had a ‘great time’, spending money he obtained by forging dead employer’s name.” Image by From the Forward archive

By around 1920, when an immigrant named Izzy Guss opened the Guss’ Pickles storefront on Hester Street, some picklers began to outgrow their pushcart origins and pickle dynasties — Guss’, Ba-Tampte, United Pickle — eventually emerged. While they their roots were on the Lower East Side, many now operate out of Brooklyn, where Herschel of “An American Pickle” finds himself a local celebrity with his “authentic” recipe of rain water, salt, dumpster-salvaged cucumbers and reclaimed label-free jars.

In a twist, the scummy intensity of Herschel’s cukes — the factor that so reviled the health-conscious of the day — works in his favor. The pushcart model, far from being sneered at, has hipster street cred and draws queues around the block.

With upstart pickle operations like The Pickle Guys, who use the old techniques of their Essex Street forebears, pickles, in their original form, are having a moment. Herschel needs to make some major 21st century adjustments, but he certainly stumbled into the right industry.

Whether Herschel will expand to pickle other items that once enraptured the Lower East Side’s ragged Jewry remains to be seen. We’d certainly watch a sequel where he hawks whole pickled cabbage and cold brew to the Williamsburg crowd. With a kosher certification, he could be a hit with both hipsters and Haredi.