In Seth Rogen’s ‘American Pickle,’ a salty tale of preserving (at least some) Jewish traditions 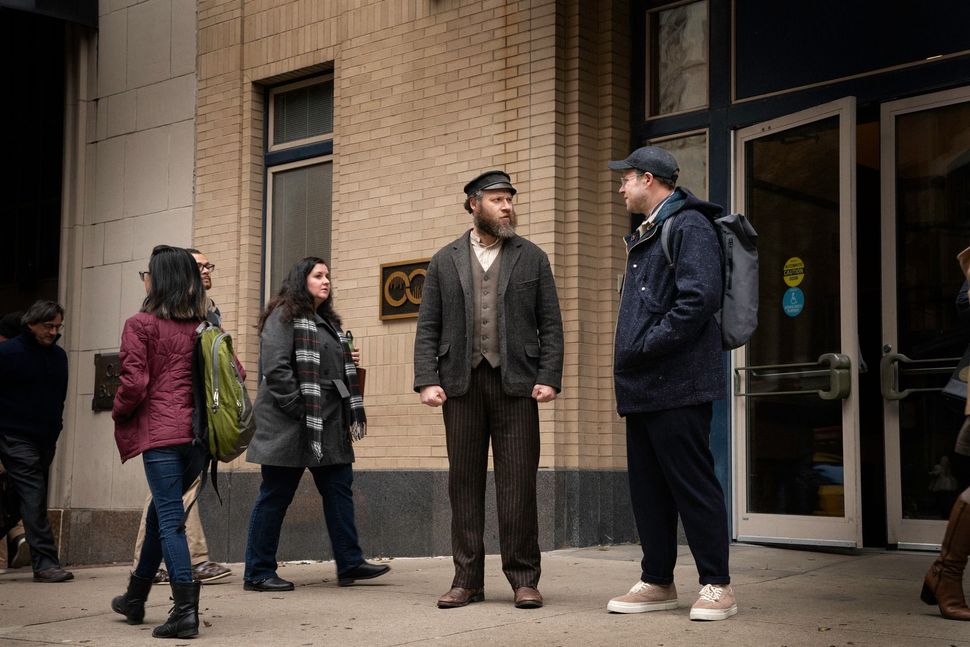 Seth Rogen as Herschel and Ben Greenbaum in “An American Pickle.” Image by Courtesy of HBO Now, Photo by Hopper Stone

It’s surprisingly easy to read “An American Pickle,” a fable about Jewish continuity as told through the pickled personage of an Eastern European immigrant preserved 100 years in brine, as an allegory for Seth Rogen’s most recent controversy.

Based on Simon Rich’s New Yorker novella “Sell Out” and developed with Rogen, who also produced, the film received some divisive press attention in late July following a promotional interview on Marc Maron’s “WTF” podcast.

In a wide-ranging discussion that touched on all manner of Jewish topics, Rogen wondered if Gandalf was modeled on Hasidic Jews. But Rogen really stirred the pot when he stated that the concept of Israel belongs to “an antiquated thought process” about Jewish security. He added that he was “fed a huge amount of lies about Israel” through his Jewish education, specifically about the Palestinian presence in the region at the time of the country’s founding. Rogen clarified his remarks about the Jewish State in a conversation with Chairman of the Israel Agency for America Isaac Herzog, but many progressive Jews — particularly those of a younger generation — welcomed his initial criticism.

Israel doesn’t enter into the story of “American Pickle,” (though a SodaStream, a popular objet d’boycott given its West Bank provenance, is featured prominently). But at the core of the film and Rogen’s comments, is a broader clash with the values of an older Jewish establishment and an emerging younger guard. Rich, who wrote the screenplay for director Brendon Trost, has whimsically dramatized the discourse between young American Jews and their forebears but, in a schmaltzy and at times astringent way, the film makes the case for keeping some of the old ways — if not the unsavory parts.

Herschel Greenbaum (Seth Rogen), an Orthodox Jewish rat chaser at a Brooklyn pickle factory, emerges from his century-long salt bath having missed his family’s steady advancement over generations. But the robust Herschel finds a living relative and roommate in Ben (also Rogen), a Williamsburg-based app developer with seasonal allergies and an affinity for nut milks.

Coming from a world of extreme privation and prejudice — the fictional shtetl of Schlupsk, where he worked as a ditch digger — Herschel places a premium on family honor in this new century, launching his own pickling business to raise money to remove a vodka billboard near his family plot, where his beloved wife Sarah (Sarah Snook), is buried. Believing the billboard-installers to be Cossacks (there’s some previous trauma there, played for laughs) Herschel assaults them, getting him and Ben into trouble and igniting a vendetta between himself and his great-grandson.

Herschel’s grit and natural brining process makes him an immediate hit with Brooklyn hipsters, who flock to his cart and its scummy product. As Ben’s clueless immigrant ancestor stumbles his way into success — his frugality and brusqueness are seen as charming and eco-conscious — he struggles to rebrand his app, Boop Bop, which charts the ethicality of corporations.

Ben bristles at Herschel’s entrance into his life, not just because Herschel torpedoes his success, displays less-than-savory business practices and habitually says offensive things about minorities (and Polish people), but because he reminds him of his deceased parents and a faith tradition he left behind.

When Ben doesn’t want to visit his parents’ graves (he does, but looks at his phone instead of davening) or admits to sabotaging Herschel, Herschel questions whether he’s truly a Jew. At one point, Herschel unloads on Ben, saying, “You are my enemy. You dishonor Greenbaum name.”

Those remarks, even coming from a man with a benighted worldview — in one scene he manages to offend an entire auditorium at Columbia with his opinions of Christianity — sting. What Rich’s screenplay, and Rogen’s poignant, rarely cartoonish performances convey in this story about grief is a generational guilt at not living up to our family’s greatest hopes.

For a Jew like Ben, far removed from the Orthodox traditions of his first-generation relatives, having a devout, ascetic ancestor pay a visit to his cushy apartment is a kind of waking nightmare. It’s an impossible kind of cultural confrontation we often wonder about, but never face. And, because of the double-casting, there’s no denying that he’s facing himself while standing in for a wider diaspora dilemma. Herschel was not alone in his generation’s wish that his family would thrive after 100 years in America. Ben, stifled by guilt and forgetting the Kaddish, is, sadly, probably not the only person who’s read a cute animal listicle at a gravesite.

But, in the end, through farce and a very on-brand Twitter controversy stemming from Herschel’s unfiltered thoughts (Rogen has been hounding Jack Dorsey to shut down hate speech for two years now), the film concludes there’s something profound about Jewish tradition.

The concept of l’dor v’dor, from generation to generation, that so pervades Jewish culture and the immigrant ethic, emerges as a theme that is at once religious and secular. Religion — say, a Mourner’s Kaddish — becomes more about received tradition than God. Reckoning with the past, by communing with it, shows why faith persists and why the real-world Rogen, standing by many of his remarks, humored his mother in her request to Zoom chat with Herzog about them.

Secular Jews who have problems with their parents or whatever their parents might value, may find a psalm in this film. Jews don’t believe in ancestor worship, but we do believe, as our precursors did, in the next generation. This film does too, holding out the hope that we may one day all rise from the muck to greet a brighter world.

“An American Pickle” will begin streaming August 6 on HBO Max.

In Seth Rogen’s ‘American Pickle,’ a salty tale of preserving (at least some) Jewish traditions