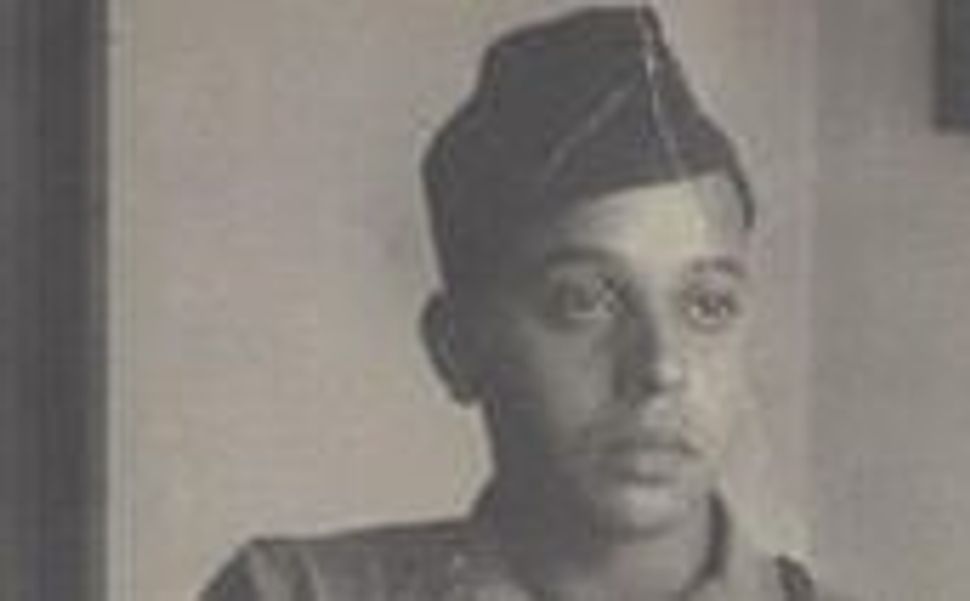 Lieutenant John Withers had every reason to say no.

The army, though segregated, was his only realistic shot at a better life. As an aspiring professor, Withers hoped the GI Bill would help him get a Ph.D., and maybe — just maybe — escape the fate that America had written for him. But a dishonorable discharge would make the GI Bill a non-starter. And for a Black man from Jim Crow North Carolina, the consequences likely wouldn’t stop there.

So it was with everything to lose that Withers faced Shlomo Joskowicz and Mieczyslaw Wajgenszperg, young Jewish men who’d survived Dachau and the liberation, and told them they could stay with his all-Black Army unit in the Flak-Kaserne barracks outside Stuttgart. Housing displaced persons, or DPs, was strictly against military protocol, lest the refugees spread disease to American soldiers. Withers, and his men, understood this. They knew that, as low-ranking members of Truck Company 3511, they had no room for error. Their job was to pick up supplies and transport them wherever they were needed — and to not let anything, or anyone, pull them off-course. 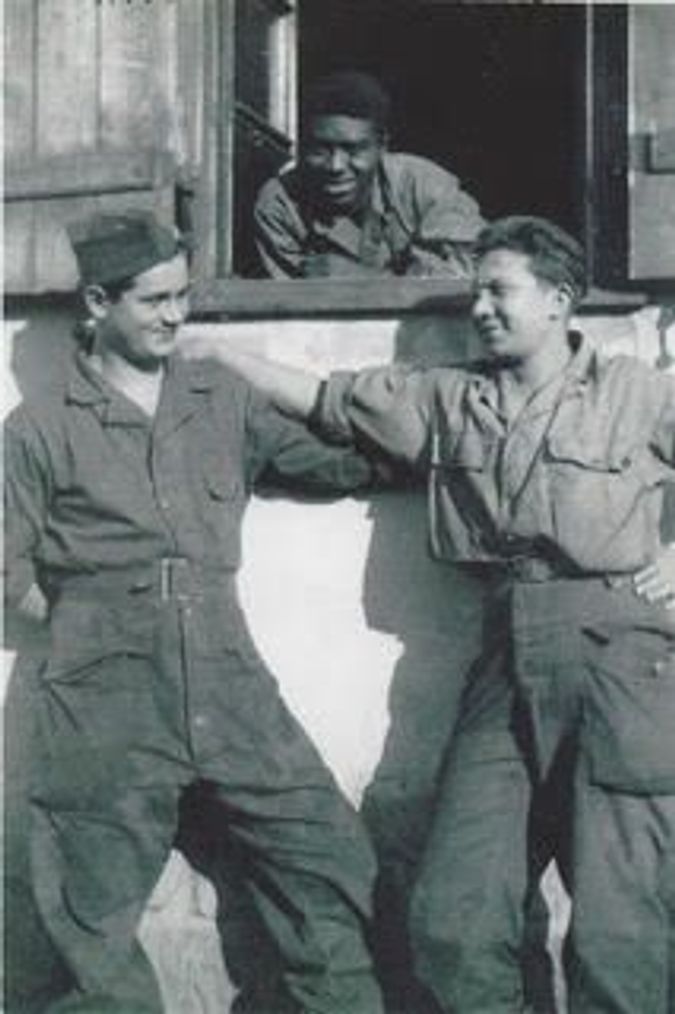 Ultimately, Withers’ decision just came down to “the fundamental humanity of that moment,” said John Withers II, Lieutenant Withers’ son and the author of “Balm in Gilead: A Story from the War,” published earlier this year. The men Withers oversaw hadn’t necessarily expected such humanity from him. In secluded rooms at the edge of the barracks, they’d sheltered the boys for over two weeks before sharing the secret with their Lieutenant, afraid he’d send the young Holocaust survivors back into postwar homelessness. But Withers saw what his men saw: kids, their ribs clearly outlined, sores dotting their skin. They would stay.

Joskowicz and Wajgenszperg — 20 and 16, respectively, in the summer of 1945 — would live with Withers for about a year. They even moved with him, under cover, when he was transferred to another unit further north, in Staffelstein. The soldiers of Truck Company 3511, who struggled with the boys’ Polish names, called them Salomon and Pee Wee. And though the bases Withers brought them to were surely preferable to the DP camps, where food was scarce and conditions grim, the boys could not yet lower all of their defenses.

Salomon and Pee Wee had to hide from inspectors while living with the Black soldiers. Only these inspectors weren’t Germans, but white officers of the American Military Police (MPs). There were close calls. Once, Pee Wee laid flat beneath a tarp — and the soldier sitting on it — when inspectors took the unit’s trucks by surprise. On occasion, the boys would retreat to the barracks’ closets and stay put for as many hours as necessary. When they first wandered onto the base, looking for food, Pee Wee and Salomon were likely not too familiar with America’s racial dynamics, but these experiences provided a swift education. “They very quickly understood,” Withers II explained: “MPs? White? Bad guys.”

They must have decided it was worth the trouble. There were, in theory, other options: Not just DP camps, but also Jewish relief organizations and the Red Cross. These would’ve furnished the boys with food, but not necessarily with community or friends. Withers II, or Jr., says his father was “providing the psychological foundation for them to believe again.”

Growing up in Depression-era Greensboro, North Carolina, Withers read avidly, finishing every title in the small, local Black library. Wanting more, he wheeled a red wagon to collect books the white library had thrown out, which he often had to tape back together. Once, he accompanied an older family friend on a home-repair job in an affluent white neighborhood. On their way home, they were confronted by a group of white teenagers who demanded to know why Black men were in the area. Knowing the situation could turn violent, Withers’ adult chaperone became completely submissive before the teens: shaking, calling them “sir,” and begging them to read his employer’s note detailing the repair work. Withers told his son that the man subsequently stopped visiting his family, likely ashamed of letting a Black child see him cowed by such fear.

After graduating from North Carolina’s all-Black Agricultural and Technical State University, Withers moved north to pursue a Master’s degree in Economics at the University of Wisconsin. His perfect grades allowed him to attend tuition-free, and he was shocked to meet white students who welcomed him into study groups — even if, as Withers Jr. describes it, their understanding of racism was marked by a “Pete Seeger”-style naïveté. If Withers spoke about experiencing racism, his well-intended white classmates would ask, “why didn’t you write your Congressman? Why didn’t you take him to court?”

All things considered, Withers felt he was headed in the right direction, until his father spent all of the savings that Withers had stashed at home. The family was poor, and needed the money — and beyond that, John’s father was skeptical of what integration could realistically offer his son. From his father’s perspective, a degree wouldn’t save John from the racist system, from what Withers Jr. called the “poison in the ground.” Withers still graduated, but his father’s words echoed when he was shortly thereafter drafted into a segregated army. “His convoy can get shot up by the Germans, but he can’t vote,” Withers Jr. explained. “Every time it seemed that he got some little opportunity, the door was shut on him.”

Lieutenant Withers knew he might be shutting his last, best door by helping Salomon and Pee Wee. But when the boys asked about America, he chose to feed their fantasy— to assure them that in America, things were OK. He later told his son that he felt an obligation to keep the boys hopeful, to lift them up from the despair of the death camps. To do that, says Withers Jr., “he had to tell them about an America that didn’t exist.”

The boys were never found out. John Withers returned home to North Carolina in 1947, and lived more of that elusive American dream than he or his father might have thought possible. He received a Ph.D. in Political Science from the University of Chicago, and rose through the ranks in the Foreign Service, eventually leading the U.S. Agency for International Development’s mission to India. He had two sons with his wife, Daisy, and the family moved between posts around the world. Withers Jr. remembers hearing about Pee Wee and Salomon as a child in Vientiane, Laos, when his father would tell war stories at night. He grew up to follow in his father’s Foreign Service footsteps, serving as the U.S. Ambassador to Albania from 2007 to 2010.

In 2000, Withers was diagnosed with cancer, a diagnosis that triggered a concurrent struggle with depression. “Look,” Daisy told Withers Jr., “we’ve got to show him that he has led a good life.” His many titles wouldn’t do it. Withers Jr. understood that, if his father were to find peace, he would have to know what became of Salomon and Pee Wee. 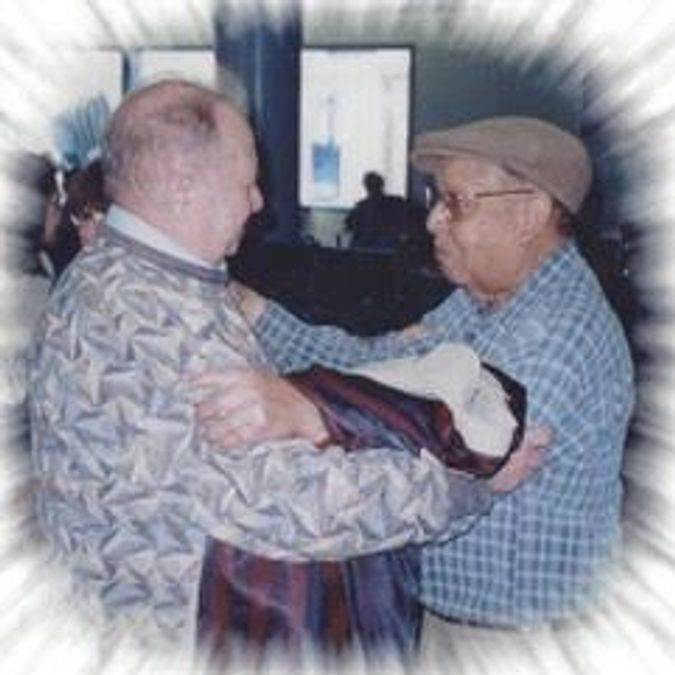 After much detective work and correspondence, including some reporting from Staffelstein while he was stationed abroad, Withers Jr. delivered the answers: Salomon had passed away in Israel, in 1993, but Pee Wee was living in Connecticut. He’d Anglicized the name Mieczyslaw Wajgenszperg to Martin Weigen — but once he was reunited with Withers in 2001, he insisted that the man who sheltered him all those decades ago still call him Pee Wee.

Though Weigen passed away just two years later, in 2003, a friendship had flowered between the families, and Withers delivered a eulogy at Weigen’s funeral. Withers passed away in 2007, after his reunion with Pee Wee prompted Hebrew Union College to award him their prestigious President’s Medal — just one of many honors he received from various institutions. At his funeral, a cousin sang one of Withers’ favorite African-American spirituals, whose title comes from the Old Testament’s Book of Jeremiah.

“There is a balm in Gilead / To make the wounded whole,” she sang. For Withers Jr., that summed everything up. Just before he died, his father told him, “I’ve achieved everything I wanted in my life.”

Matthew Taub is a writer in New York specializing in history and culture. His work has appeared in Atlas Obscura, TIME, The Atlantic, and other outlets. Learn more at matthewtaubwrites.com.