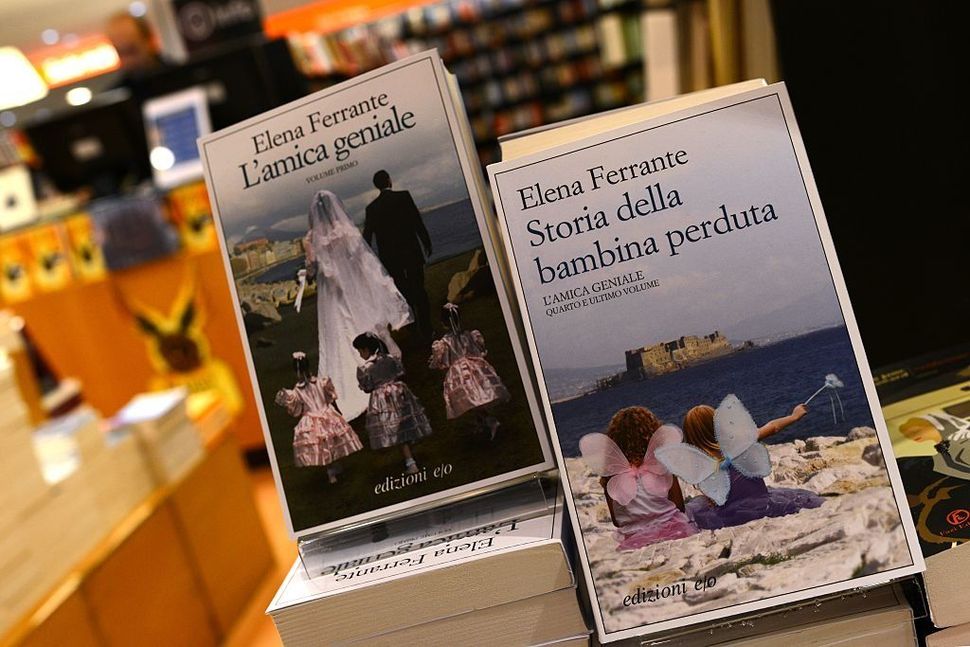 Halfway through Elena Ferrante’s new novel, “The Lying Life of Adults,” the narrator, a teenage girl named Giovanna, runs into a priest.

Don Giacomo has fallen into disfavor at his church. Previously buoyant, his skin has turned sallow, and a mysterious, violet rash is creeping over one of his hands. Giovanna, ever curious, asks Giacomo what’s happened to him. “When you’re made to do things you don’t want to and you obey, it works on your mind, it works on everything,” he says.

“Obedience is a skin disease?” she asks.

That question — how do our physical bodies reflect the dysfunction of our souls? — is central to Giovanna’s adolescence, and therefore central to “The Lying Life of Adults,” translated into English, like all of Ferrante’s novels, by Ann Goldstein. (“Elena Ferrante” is a pen name; the identity of the author behind it remains unknown.) The novel’s plot is relatively straightforward: At age 13, Giovanna overhears her adored father compare her to his sister Vittoria, whom he hates and she has never met, and decides she can only recover from the insult by seeking Vittoria out, a move that precipitates a series of familial crises which painfully usher Giovanna through her teenage years. But the book is anything but direct, because it’s really about Giovanna’s relationship with her own body, specifically her face.

What could be new in a novel about an adolescent girl obsessing over her appearance? For Ferrante, who shot to international fame with a quartet of books known as the “Neapolitan Novels,” the choice of subject is a bold one. The “Neapolitan Novels” and Ferrante’s earlier, more surreal novellas, most famous among them “The Days of Abandonment,” were tied together by an obsession with the darker corners of the feminine psyche: Ferrante’s characters lose themselves in love, hatred and self-examination; are tormented and paralyzed by their confused responses to strict societal expectations; and respond with erotic fascination or aggressive misery to seeing themselves reflected in other women.

Ferrante generally excels at breaking apart the troubled experience of attempting to build a genuinely meaningful life as a woman. But of all the plentiful expectations of women there are to interrogate, few are more insidious than the idea that teenage girls are — and even should be — frivolously, singularly preoccupied with their appearances. That trope is at the root of the conflicted prejudices that follow women into adulthood: They must be attractive to succeed, but caring about their attractiveness proves that they are vain and silly; their focus on their appearance makes them untrustworthy with serious matters, but if they do not prioritize their appearance they are unwomanly, and therefore also untrustworthy; they must be beautiful to attract love, but by being beautiful, they make themselves responsible for any violence that others — usually men — might enact toward them.

Thus, the challenge Ferrante has posed herself: Is it possible to root a story entirely in a noxious stereotype, and still create something genuinely human — and genuinely good?

The answer is, happily, yes. Ferrante has approached her subject before: The narrator of the “Neapolitan Novels,” a novelist named Elena, has searing recollections of the torment that accompanied her attempts to understand her physical shift from beautiful child to awkward, acned, abashed teen. But “The Lying Life of Adults” brings something new to the formula, a moving exploration of the ways in which Giovanna’s confusion about her physical self, by serving as a catalyst for the broad disruption of her life, becomes a sort of filter, helping her come to understand — brutally, tragically — the complexities of the adult world into which she’s ascending.

At a school meeting after a year in which Giovanna’s father has left home following the revelation of his 15-year affair with his best friend’s wife. Giovanna has all but dropped out of high school; her mother, devastated by her husband’s abandonment, is withering in front of her. “I didn’t feel I had a talent for anything: I wasn’t intelligent, I wasn’t capable of good intentions, I wasn’t pretty, I wasn’t even nice,” Giovanna thinks, as her literature professor berates her for her perceived lack of talent with classics. Then she turns the lens: “My mother — too much eye makeup, too much powder on her cheeks, the skin on her face drawn, like a veil.”

Her mother defends her, but Giovanna is less interested in the meeting than what she observes as a contrast between her mother and herself. She sees the failings she perceives in her own character, accurate or not, as a function of predestination: Her face is bad, therefore she is bad. But she understands, implicitly, that the physical changes she sees in her mother — the bad makeup, the drawn skin, the progressively hunched shoulders — are reflective of experience, not fundamental character. Giovanna’s parents’ separation has left her with disgust for both of them; it’s only when she observes her mother’s body that she finds sympathy for her, as if grief and betrayal are abstractions she can only understand when they manifest as something that can be seen and touched.

What to make of that contrast? Giovanna hardly knows. She’s exceptionally observant, astute at parsing the characters of others in a sort of act of sophisticated distancing. What she wants, of course, is to be observed herself, and reassured that the most fundamental matter of her being — her body, her face — does not condemn her to repeat or worsen the terrible foibles of the adults around her, who seem to harm those close to them almost reflexively.

When she finally is so observed, she comes unmoored. Close to the book’s end, she accompanies her friend Giuliana to see Giuliana’s fiancee Roberto, with whom Giovanna is half in love, in Milan. In the morning, she brings coffee to the duo, lying naked together in bed. “You’re very beautiful,” Roberto tells her. The two girls return to Naples, and Giuliana realizes she’s left a valuable bracelet — itself loaded with symbolism — with Roberto. Giovanna convinces her to go home, then returns to Milan, alone. She understands that she’s not really returning for the bracelet, and convinces herself that her intention is to seduce Roberto, mimicking the pattern of the many adults who’ve disappointed her: Her father, with his prolonged infidelity; Vittoria, who remains obsessed with a brief, long-past affair with a man she has elevated to the profile of a saint; her mother, who has fallen into a relationship of companionable suffering with her ex-husband’s betrayed best friend.

But what she finds, when she arrives, is that Roberto’s benediction — “you’re very beautiful” — has, in fact, changed her expectations of herself. The idea of having him define her by her body, the goal of seduction, is suddenly repulsive. After years of preoccupation with the belief that her physicality entirely proscribes her character, she suddenly sees the trap inherent in that idea. It’s a moment of bittersweet release, true to life, in which the stereotypes we battle become intimate parts of us: we may yearn to be rid of them, but they remain painful to lose.

“Why did you come back?” Roberto asks Giovanna. “I don’t know anymore,” she says.