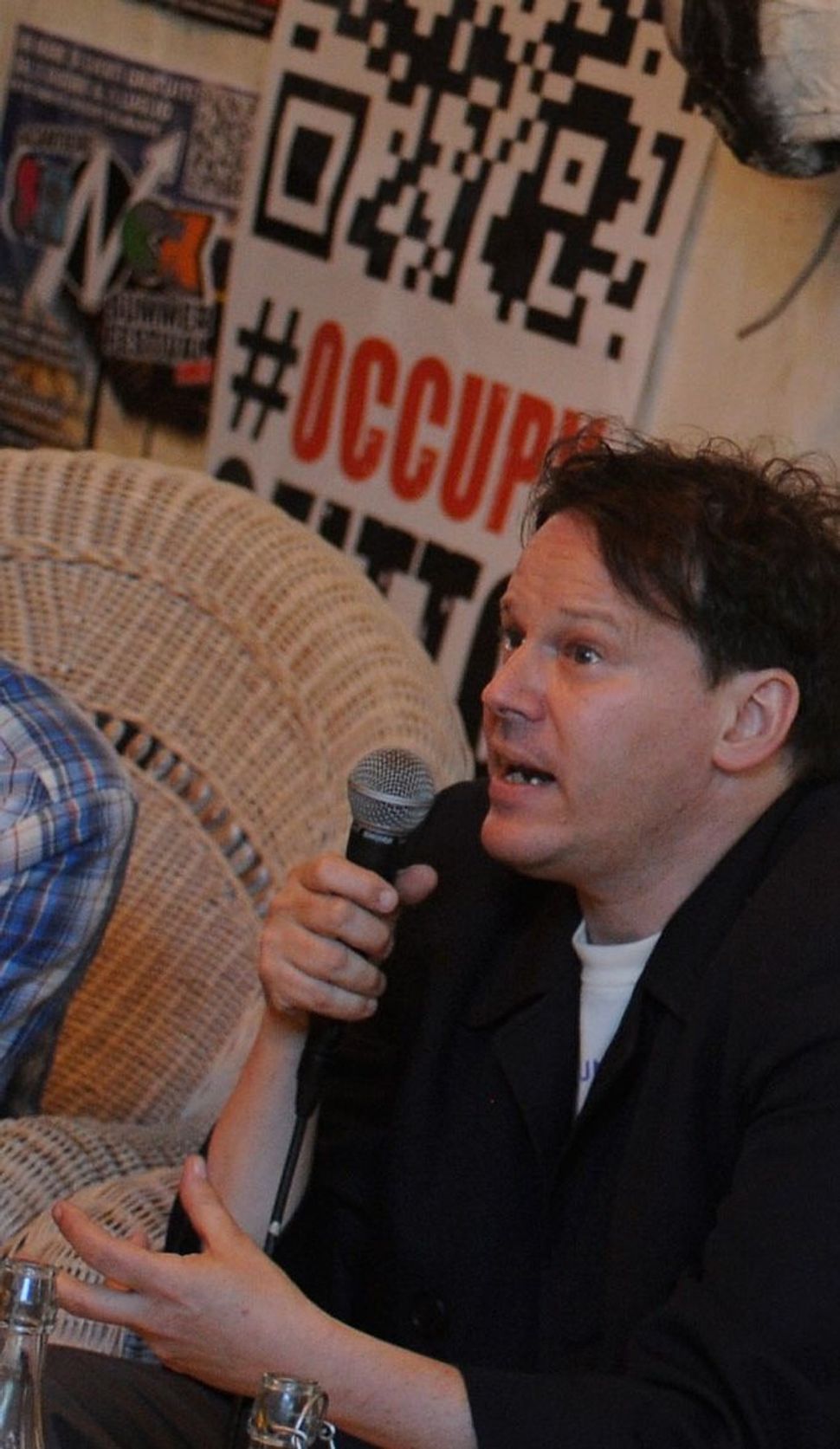 David Graeber, the anthropologist who played a pivotal role in Occupy Wall Street and devoted his academic career to the study of societal inequality and “bullshit jobs,” died September 2 at the age of 59.

Graeber’s death was confirmed on Twitter by his wife, Nika Dubrovsky, who said he died at a hospital in Venice, Italy. No cause of death was given.

Graeber was known for his outspoken politics. He was a founding member of the Anti-Capitalist Convergence, an anarchist group formed in the late 1990s with various chapters throughout North America. He nonetheless rejected the label of anarchist — at least sometimes — noting in his Twitter bio “I see anarchism as something you do not an identity so don’t call me the anarchist anthropologist.”

Born in 1961 in New York, Graeber was brought up in a revolutionary milieu. His father, Kenneth, served in the Spanish Civil War and was a member of the Youth Communist League. Ruth, his mother, was a garment worker, who acted in the lead role in “Pins and Needles,” a production by the Ladies’ Garment Workers’ Union. According to a Guardian profile from 2015, Graeber began identifying as an anarchist at the age of 16. “Anarchy wasn’t dinner table conversation,” he told The New York Times in 2005, “but it was on the horizon.”

A graduate of Phillips Academy Andover, Graeber received his B.A. from the SUNY Purchase in 1984 and earned his master’s and doctorate in anthropology from the University of Chicago, securing a Fulbright fellowship to conduct field research in Madagascar for his doctoral thesis. In 1998, he became an assistant professor at Yale. But in 2005, the school decided not to keep him on for the next academic year. The school gave no reason at the time, but he believed that it was because of his politics.

Graeber rallied supporters to write letters on his behalf (some 4,500 signed petitions supporting him, including prominent anthropologists Marshall Sahlins, Laura Nader, Michael Taussig, and Maurice Bloch), but agreed to take a paid sabbatical from the school in exchange for dropping his appeal.

“So many academics lead such frightened lives,” he told The Times of his decision. “The whole system sometimes seems designed to encourage paranoia and timidity. I wasn’t willing to live like that.”

Graeber acknowledged that, as an anarchist in an Ivy Tower, he was “challenging the way universities are run,” but said he had hoped to live as an activist in New York and a scholar in New Haven.

In 2011, Graeber’s activism crescendoed when he became involved with the Occupy Wall Street protesters at Zuccotti Park. Graeber is often credited with creating that movement’s most recognizable slogan, “We are the 99%.”

“We wanted to demonstrate we could do all the services that social service providers do without endless bureaucracy,” Graeber told The Guardian four years after the Occupy protests began. “People kept giving us money but we weren’t going to put it in the bank. You have all these rules and regulations. And Occupy Wall Street can’t have a bank account. I always say the principle of direct action is the defiant insistence on acting as if one is already free.”

As an anthropologist, Graeber was known for his work on value theory, or how societies determine what is important. His 10 books covered the topics of the value theory, global justice and the Occupy Movement’s experiment in direct democracy. His best-known books included “Debt: The First 5000 Years” and 2018’s “Bullshit Jobs: A Theory,” inspired by his 2013 article “On the Phenomenon of Bullshit Jobs.”

“Bullshit jobs” are, essentially, any kind of work that could be automated or that serves no essential purpose, but are kept in place anyway, despite leaving their workers feeling unfulfilled. “Huge swaths of people, in Europe and North America in particular, spend their entire working lives performing tasks they believe to be unnecessary,” Graeber told The Guardian. “The moral and spiritual damage that comes from this situation is profound. It is a scar across our collective soul. Yet virtually no one talks about it.”

At the time of his death, Graeber had been a professor at the London School of Economics for seven years. In London, he continued his activism, addressing the climate change group Extinction Rebellion in a demonstration at Trafalgar Square in late 2019. He was a supporter of Jeremy Corbyn’s Labour Party, and his pinned tweet was a graph alleging falsehoods in various British publications surrounding their coverage of the Labour’s alleged antisemitism problem.

as for the Guardian, we will never forget that during the “Labour #antisemitism controversy”, they beat even the Daily Mail to include the largest percentage of false statements, pretty much every one, mysteriously, an accidental error to Labour’s disadvantage pic.twitter.com/XiwYsVMOiZ

He was not shy to disagree with those he allied with either. His final tweet criticized a statement from the UK chapter of Extinction Rebellion’s Twitter account for being exclusionary.

I don’t know who writes these tweets but they should be fired. This is either awful PR or intentionally trying to alienate someone for internal political reasons. If you’re non-ideological, doesn’t that mean you’re not socialist OR pro-capitalist? Why leave one of the two out? https://t.co/vYxmZqsckD

For all of his critiques of managerialism and society’s broader flaws, Graeber described himself as ultimately hopeful about the future, telling the New Statesman he was a “professional optimist.”

Coming out in support of a Universal Basic Income, he predicted that in 50 years, the capitalist system would be obsolete. Yet, he was guarded about any replacement. “It could be something even worse. It’s therefore imperative that we end this taboo around trying to figure out something that might be better.”