What would Ginsburg do? Move forward with hope. 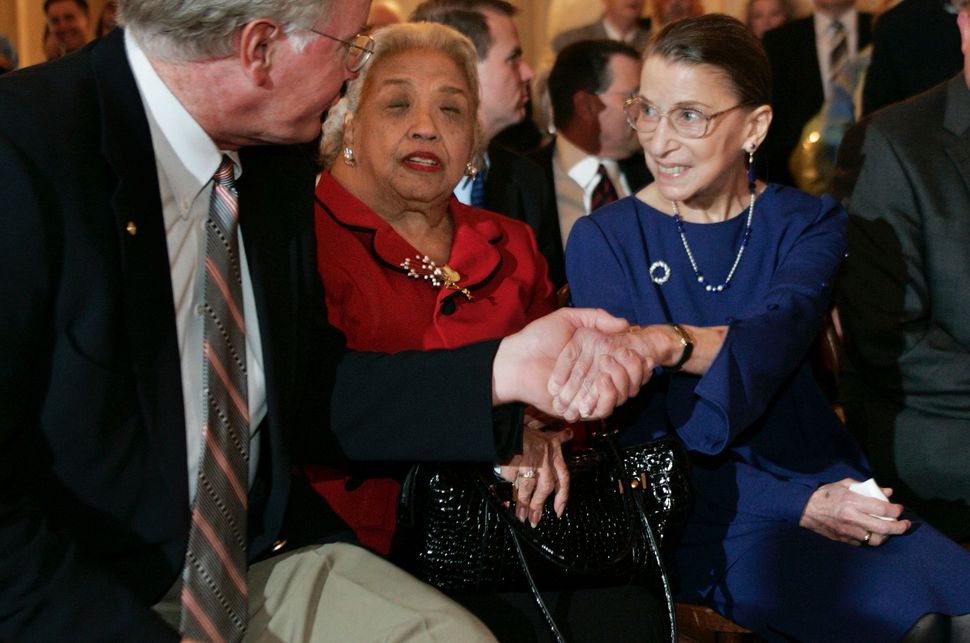 Ruth Bader Ginsburg on May 4, 2005. Image by Chip Somodevilla/Getty Images

Several weeks ago, my mother announced that she had a present for me: She’d ordered me a Ruth Bader Ginsburg face mask.

It’s a funny little thing: Good, thick, cream-colored fabric patterned over with drawings of miniature RBGs. When it arrived, we agreed that I would save it to wear when I returned to my apartment in Brooklyn after the high holidays, after several months of pandemic-sheltering with my family in Denver. For five years, ever since I moved to New York, I’ve lived in an area of Flatbush close to where Ginsburg grew up. Both my mother and I liked the idea of my wearing the mask around that neighborhood as a tribute to her. 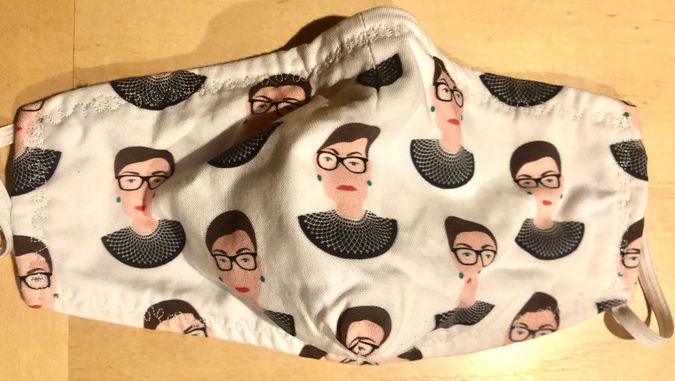 When I woke up on Saturday, one of my first thoughts was that it would feel wrong to ever wear the mask. It was just the kind of frivolous idea that creeps in to interrupt grief, but it stayed. Through morning Rosh Hashanah services, I poked and prodded at it: Why was I so preoccupied with something so inconsequential?

Then, it hit me. I’ll wear the mask at least once: When I vote.

Before my mom called my brother and me to tell us about Ginsburg’s death — we went camping for the first day of the holiday — I’d already been thinking about hopelessness. It is my most perpetual sin, the one I inevitably think of each year when I perform tashlich, the ritual of casting our sins — in the form of breadcrumbs — into a body of water. When things are difficult, I struggle to imagine a world in which they might be less so. When I’m confronted with miseries that I can’t control, or even lightly influence, my overpowering instinct is to just give up.

This year, of all years, my sin has reached its apogee. More than 200,000 Americans are dead of a virus that most other countries managed to successfully control; disinformation, a plague we’ve known the extent of since 2016, has somehow become only more rampant; wildfires are swallowing up unprecedented swaths of the West, including in my home state — on the drive to our campsite the smoke was so thick, we could barely see the Rocky Mountains until we were in them.

Hopeless, hopeless, hopeless. And yet. The Days of Awe are called that for a reason. They are an opportunity, while we account for our shortcomings, to look toward what is astonishing about the world.

Ginsburg’s existence was, to many people, a powerful rebuttal of hopelessness. A tiny Jewish girl from Brooklyn who faced closed doors throughout her career because of her faith and gender not only became one of the most powerful thinkers in the country, but pulled other women up with her.

She understood that rising alone in defiance of the system is really no kind of defiance at all. She was famous for saying that there would only be enough women on the court when they filled all nine seats. People were always shocked, she said: “But there’d been nine men, and nobody’s ever raised a question about that.”

The arc of Ginsburg’s life proved that progress was possible. Sometimes, from the outside, it made it seem inevitable.

But her work embodied the value of hope even more powerfully.

When I was in high school, I was part of a team that won a national championship in a constitutional law competition run by the Center for Civic Education. This meant I spent much of my junior year reading case law. Usually, it was dry. Sometimes it was horrifying. But occasionally — very occasionally — it was transcendent. And Ginsburg’s opinions and dissents were more frequently staggering than those of any other justice.

Her sense that the world not only could be better, but must be, was omnipresent. She saw her country’s most abiding injustices, and in clean, incisive prose, laid out just why and how they ought to be corrected. Often, she was voicing dissent to decisions that she knew would change the country for the worse. But whether she wrote in victory or defeat, her hope for a better future made her insist that her words and ideas be reckoned with.

In her most famous opinion, United States v. Virginia (1996), Ginsburg wrote that “state actors controlling gates to opportunity” have “no warrant to exclude qualified individuals based on ‘fixed notions concerning the roles and abilities of males and females.’” The sentence was so unassuming as to almost mask the fact that it was earth-shaking, undoing centuries’ worth of discriminatory precedent. It was hope made real, not through idealism, but through hard, hard work.

So: I woke up in my tent on Saturday, and thought of the RBG mask I would never wear, and the sadness I hadn’t allowed myself to feel the night before, as I wrote her obituary from a picnic table while my brother, his fiancée and our friends sat socially distanced around a campfire. I couldn’t quite bring myself to get out of my sleeping bag. “I feel mostly numb,” a friend texted. “Me too,” I wrote back.

But then we began our Rosh Hashanah services, surrounded by pine trees and wildfire smoke and aspens beginning to turn their autumnal gold, by singing Louis Armstrong’s “What a Wonderful World:”

I thought that Ginsburg, if she were with us, would probably see the blue skies behind the smoke, and plan for how she could help us to see them clear once again. I thought about the blessed day that, among all the grief and suffering that now makes up ordinary life, we were all alive to greet together. After the Amidah, we made mimosas, and toasted our lost hero.

And I knew that my Ginsburg mask — my silly totem, which I couldn’t stop thinking about — was in fact the emblem of a serious choice. I could toss it aside, or I could use it to move forward in hope.

I want to leave my greatest sin behind. I want to see the skies turn blue again. Like Ginsburg, I want to help this country move forward, with the small, single voice that I have. I returned to my parents’ home in Denver and checked my voter registration. And so when I stand in line in November, ready to exercise a right she worked vigorously to defend, I’ll have my mask with me.

What would Ginsburg do? Move forward with hope.