He may be our lox expert, but his heart belongs to clamming 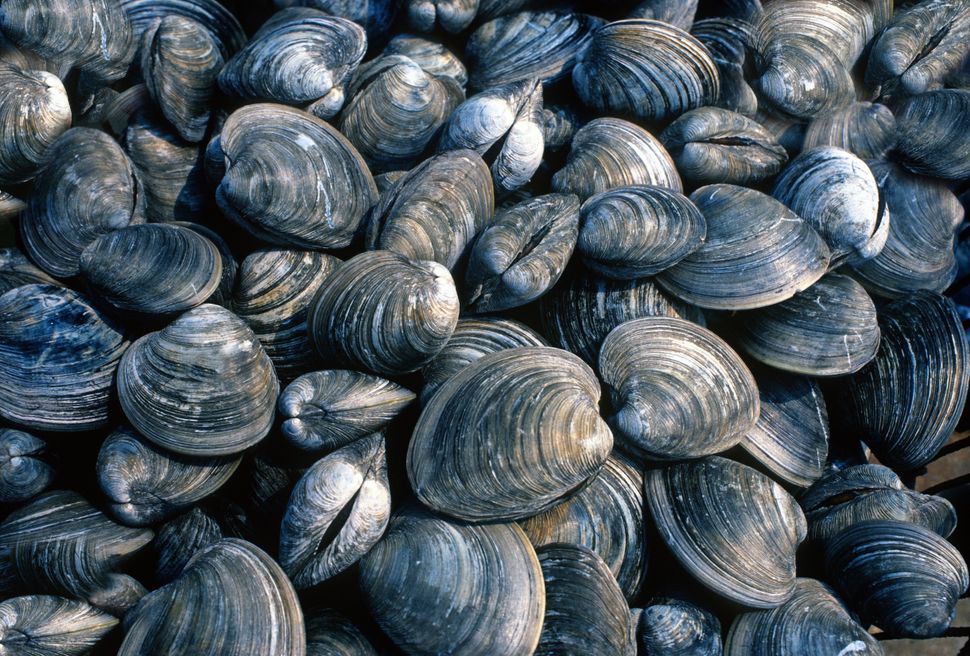 He had opened about two dozen top necks, separated the meat from the juice, and was ready to put up the water for the linguini. Another pot on the stove, above a low flame, was some simmering Greek olive oil, mixing it up with two cloves of chopped garlic. The aroma in the kitchen was ethereal. He reached out for the clam juice where he had left it, but it was gone. “Minna, Minna, (that was his wife’s name) what happened to the clam juice?”

“It was right here on the counter!” he said.

“You mean that glass of dish water? I spilled that out.”

He couldn’t believe what she had done. He was on the verge of tears. What was to be done? He had a dinner to make. He took off his apron and the next thing I heard was a car pulling out of the driveway. 20 minutes later, he returned with three bottles of Doxsee Clam Juice and finished making the linguini and clam sauce. It wasn’t as good as if it was made with his clam juice, but it was good enough.

His name was Milton Abernethy, a southerner from Chapel Hill, North Carolina. He lived in an apartment building on Riverside Drive, on the upper west side of Manhattan. He also had a lovely summer home in the Shinnecock Hills of Hampton Bays, New York. My family was occasionally invited to spend the weekend with them there. They, Minna and AB (AB, short for Abernethy,) were aunt and uncle to my wife, Llewellyn. Ab was as far away from a “Milton” as you can get. Is Milton a Southern name? Nobody ever called him Milton. He was ”Ab.”

Ab and I hit it off from the get-go. He was the owner of a bookstore called “The Intimate Bookshop” in Chapel Hill, North Carolina, a successful stockbroker in New York City, but I will always think of him as a fisherman extraordinaire and a clammer. He would pick my brain for the latest tax information so that he could prepare tax returns for some poor friends down south who couldn’t afford to pay for accountant.

Hampton Bays on Long Island, New York, is partially surrounded by water; The Great Peconic Bay to the north, Shinnecock Bay and the Atlantic Ocean to the south. It’s fish and shellfish country. There is a canal that forms the passageway between the two bays. From the middle of August to the end of September, the canal is not only the way pleasure boats get from one bay to the other but also for the baby blue fish (snappers, they are called) to make their trip. That was the place that Ab took me as an introduction to fishing. I quickly learned how exciting fishing for snappers was. A light rod was used to hook them and when they bit your bait, it was with a thrust that excited the guy (or gal) holding the rod.

They were fighters, these baby blues, and once you hooked them they rarely got away. But fishing for them was not the only reward. There was the fun of taking them home, filleting them, dredging them in flour, pan frying them and then the ultimate pleasure of eating them. I can taste them as I write this.

Snapper fishing was not the only thing Ab introduced me to. One day, during one of our visits, Ab sent me down to his basement to get a pail. It was the first time I was ever there and what I saw was a bit shocking. The place was in a state of disarray. I wondered if Ab was also in disarray. Confused about it, I let it go. While looking for the pail, I noticed many other pieces of equipment, but I was particularly drawn to some kind of a rake. The tines were very unusual for a rake, I thought; they were quite long. It didn’t look like a gardening rake. What was it for?

Ab told me that it was a clam rake. At that moment, I knew I wanted to go clamming with him.

One day the time came, the tide was low (as it should be for clamming) the sun was shining. Ab provided me with a rake and waders and we went to a spot in Shinnecock Bay. He explained to me how one goes about clamming. It was a first for me, and I loved it.

I started to research clams and clamming. I wanted to know more about them: more than that they were shellfish and delicious. I discovered some interesting things. Basically there are two types of clams; hard-shell and soft-shell. Soft-shell clams are male and female; hard shell clams are hermaphrodite. They have the equipment to self-reproduce. Hard clams (aka Quahogs) have the greatest longevity of any marine organism; they can live at least 200 years. They live beneath the surface of sand or mud, finding their own spot, out of harm’s way. There they reside, moving ever so slightly on their own, but occasionally having their neighborhood changed by the water currents. They are usually harvested after the age of 20.

As a CPA, I was approached occasionally for financial advice. Once, my step-daughter and son-in-law. had some funds available for investment and asked my advice. I suggested they buy half a house in Hampton Bays and Llewellyn and I would by the other half. It happened just that way and for the past 40 years, from April through September, we spend most of our weekends there, just a clam’s throw from a beautiful bay beach.

Soon after we started our weekends there, I bought myself an almost-professional clam rake and a wader and began my search for the most beautiful spot with the greatest clam yield. For years I clammed in many different places, in search of which I finally found.

It’s a beautiful spot. You turn off Montauk Highway and drive about an eighth of a mile to a bend in the road when, suddenly, the blue of the sky in front of you meets the cool still waters of this beautiful, shimmering, quiet inlet of the Peconic, and you know that you have arrived at someplace wonderful.

I would estimate that I have retrieved over 4,000 clams from that body of water over the years. That provides for a lot of clams in black bean sauce, linguini in clam sauce and clam chowder.

Usually there is no one clamming in this water but me. I often wonder why, since this is a place of beauty and there are always clams here (sometimes even an occasional oyster). About two hours is usually enough for me. By then, I have between 75 and 100 clams in my Zabar’s Styrofoam box which is attached to my waist with a clothesline.

I now use this floating Styrofoam box that previously held sides of salmon delivered to Zabar’s to deposit my clams as I retrieve them from below. I make my way out of the water, put the clams in plastic bags and drive home. There I empty the clams into the sink, where I wash them to get rid of the sand on the shells and proceed with the count; always the count. Why I count them all the time remains a mystery to me. Then I sort them by size. Cherrystones in one group and Top and Littlenecks in another group. I put the sorted clams in wide containers, cover them with drenched towels and put them in the refrigerator, where they remain until called upon. Clams love the cool and the wet. It reminds them of home.

Quite often I would bring a few dozen to Zabar’s, where I worked slicing lox at the fish counter, find a spot behind the counter that was not in use at the moment, open them, place them in wide plastic containers, squeeze lemon juice on them and share them with the special few that love clams as I do. Saul Zabar loves clams and I usually called him on the phone to let him know I had some. He always showed up.

Clams are very temperamental. They do not like being disturbed; therefore if you want to open them you must let them relax and stay cool before you attempt to do so or they will clam up and it will be impossible to open them.

Occasionally, I m asked if clamming poses any risk or danger and I usually reply in the sphere of the affirmative. A few months ago, while clamming, I stepped into a very soft spot in the water. It threw me completely off balance and I fell. My wader filled up with water and I found it very difficult to move. Fortunately I was very near land and I was able to maneuver myself out of the water. I managed to get out of my water filled wader and I was OK. It could have been a different story had I been in deeper water and so I decided not to go clamming wearing a wader unless someone was with me. This usually turned out to be my son Michael, who I introduced to the world of clamming many years ago; today he goes clamming every chance he gets.

So, there are basically two methods used in recreational clamming. One is to find a spot and just keep digging in that spot. If that produces clams, you’re in business; if not you move on to another spot. The other is scratch clamming. Here, you put the tines of the rake down below the sand or mud water bottom and slowly walk backward until you feel the tines scratching the hard shell of a clam below them. This is a very special feeling. It starts when you become instantly aware of the scratch. The scratch seems to move up the shaft of the rake, through your arms and into your brain. Then you manipulate the rake so that the tines are under the clam and it falls into the pocket of the rake. With the clam now in the pocket you turn the rake with the tines up and you retrieve the clam. One of the disadvantages of scratch clamming is that you miss all of the clams below the tips of the rake tines. You never know what’s beneath your tines

Isn’t it rich, isn’t it queer,

Losing my timing this late in my career,

And where are the clams,

Quick send in the clams,

Len Berk worked behind the lox counter at Zabar’s for 26 years. He is the Forward’s lox columnist.

He may be our lox expert, but his heart belongs to clamming