Trump doctor press conference straight out of ‘The Twilight Zone’ 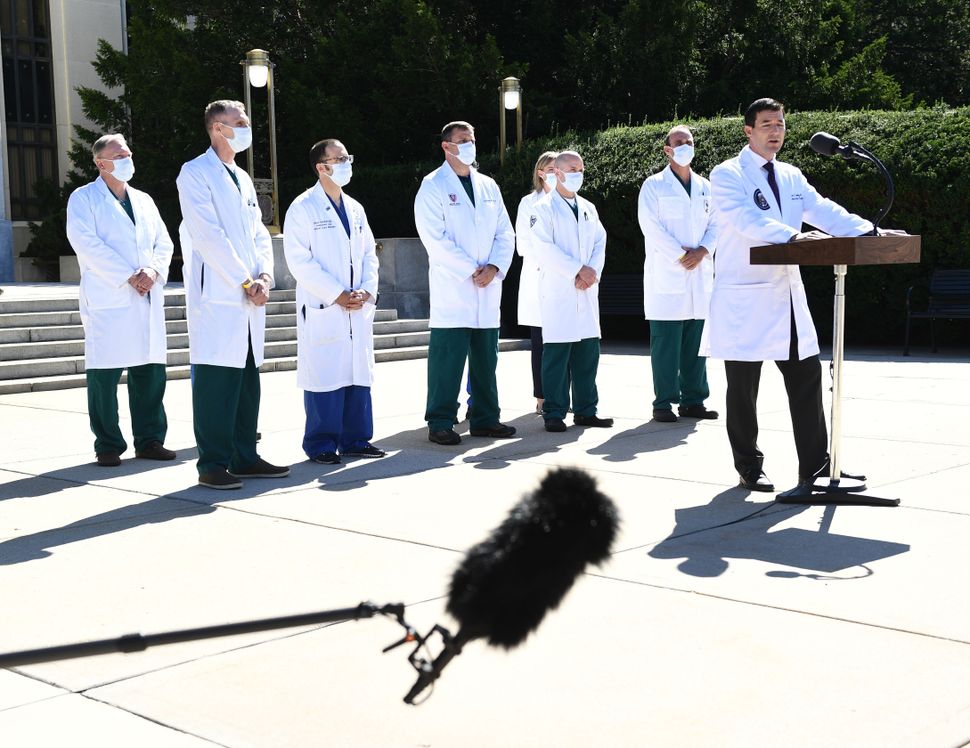 Dr. Sean Conley gives an update on the condition of US President Donald Trump, on October 3, 2020, at Walter Reed Medical Center Image by Getty/BRENDAN SMIALOWSKI/Contributor

The Trump presidency is closing in on four years of magical thinking, and it’s beginning to show its limits.

The virus Trump said would go away on its own has instead caught up with him, forcing him to convalesce at Walter Reed Medical Center. But if you trust folks in white coats, you may be assured that everything’s just fine.

“This morning, the president is doing very well,” the president’s physician, Sean Conley assured the nation Saturday morning, looking anything but self-assured in his claim. “At this time, the team and I are extremely happy with the progress the president has made.”

Despite the protestations that the president is in “exceptionally good spirits,” medical correspondents on nearly every news channel were alarmed by the lack of details — Trump’s vitals and chest X-ray results were not mentioned in the briefing, nor was the temperature of his initial fever. The question of whether the president received supplemental oxygen was skirted again and again. Watching the medical team, it was hard to escape the impression that, should they shoot straight and displease their patient, they might face some kind of consequence. It reminded us of something.

Perhaps no episode of “The Twilight Zone” is more appropriate for Trump’s notorious caprice than “It’s a Good Life.” Even master of horror Stephen King has made this parallel in the past.

Trump increasingly reminds me of Anthony Freemont, the monster child in a Twilight Zone episode called “It’s a Good Life.” Republicans kowtow to him, because he might throw a tantrum and send them away into the cornfield if they don’t.

In the 1961 episode, a small country is under the heel of a pint-sized tyrant who banishes all that displeases him.

“The people in Peaksville, Ohio have to smile,” series creator and episode writer Rod Serling informs us in his opening narration. “They have to think happy thoughts and say happy things because, once displeased, the monster can wish them into a cornfield or change them into a grotesque, walking horror.”

We see this end realized at the climax of the episode when a man named Dan Hollis (Don Keefer) finally has enough at his birthday party. He confronts Anthony (Billy Mumy), calls him a “dirty little monster” and “murderer.”

Hollis tries to get someone to smash Anthony on the head with a lamp or a bottle while the boy “thinks bad thoughts” about him. No one does, petrified as they are of what he does next: turn Hollis into a Jack in the box.

After this transformation, Anthony threatens his family and neighbors. “You better not think bad thoughts about me either, or I’ll do the same thing to you.”

It’s clear now that Trump’s physicians have been twisting the narrative of his illness to appease him — that may well be why Dr. Conley looks like he’s been in the crosshairs of some distant sniper, or, like a townie in Peakesville.

Asked on Sunday why he was less than forthcoming about certain details, following reporting that contradicted his prognosis, Conley said, “I was trying to reflect the upbeat attitude that the team, the president, that his course of illness has had.”

In other words, he didn’t want to get Trump upset and exacerbate his condition. Of course, the net effect of that is to leave the public in the dark while pretending everything’s fine.

But one understands the doctors’ reasoning, and for their parroting of Trump’s own habit for superlatives. After Saturday’s press conference, Chief of Staff Mark Meadows, in off-the-record remarks caught on tape, expressed deep concern for the president’s health and called the next 48 hours “critical.” Trump reportedly fumed at this disclosure.

We still don’t know if Trump is vigorous enough to send them to the cornfield, but the record shows it costs Trump little energy to fire those who don’t say nice things about him.

Trump doctor press conference straight out of ‘The Twilight Zone’