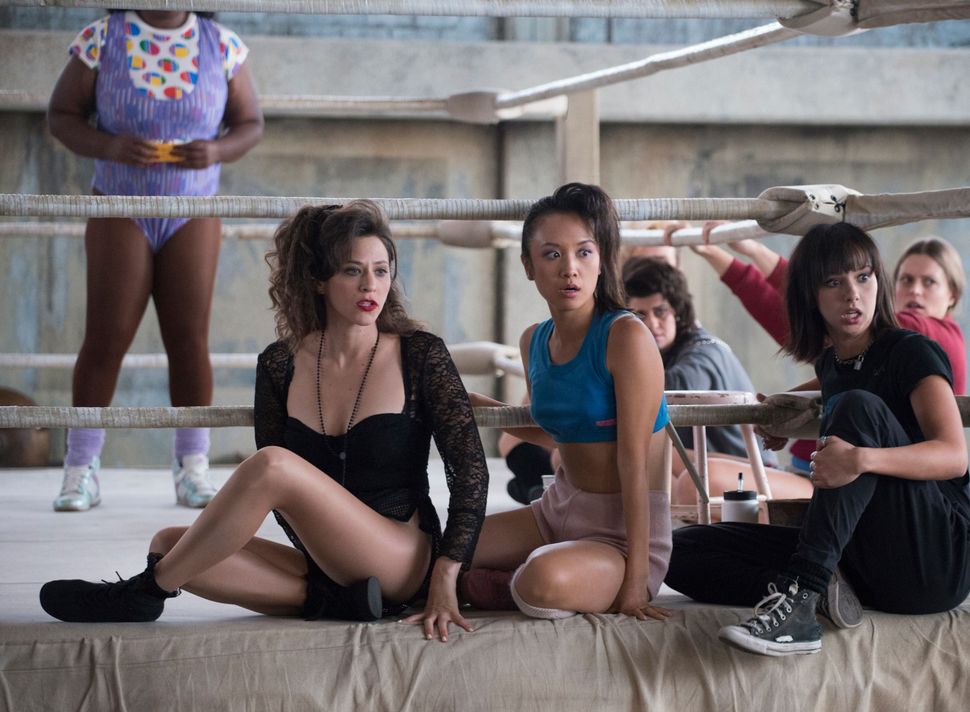 Without meaning to, “GLOW,” the Netflix dramedy set in the hairspray-hazed world of women’s pro-wrestling, had one of the most gutting finales in TV history.

At the end of the show’s third season, Ruth Wilder (Alison Brie) runs to catch her flight home for Christmas after a months-long residence in Las Vegas. “(There’s No Place Like) Home for the Holidays” plays over the intercom. Debbie Eagan (Betty Gilpin) follows her to her gate with a last-minute proposal. Their boss, Bash Howard (Chris Lowell), is buying a TV station, Debbie tells Ruth, with whom she’s spent years sparring on and off the mat. There will be a spot for a wrestling show on the signal. Debbie will be the station president. She wants Ruth to direct.

“I’m going to build us an Eden,” Debbie pledges to Ruth. “Where we run the show. You and me.”

Ruth stares back at Debbie, caught up in her excitement, but perplexed.

Acting, Ruth’s single, great aspiration, won’t happen for her, Debbie says. But this way, she no longer has to set herself up for disappointment

Ruth nods, a quivering, close-lipped smile on her face. Then, after exiting an embrace, she delivers the blow: “I don’t want what you want.” She boards the flight.

That scene was never supposed to be the end. Netflix picked “GLOW” up for a fourth and final season, which was three weeks into filming before the COVID-19 pandemic shut down production. Facing the costs of the pandemic and the difficulties of socially-distanced production, Netflix changed its calculus. Yesterday, the streaming giant announced that it would cancel “GLOW,” forever leaving audiences with the final image of Debbie staring down the jet bridge in disbelief as “Auld Lang Syne” played.

“COVID has killed actual humans. It’s a national tragedy and should be our focus. COVID also apparently took down our show,” series creators Liz Flahive and Carly Mensch said in a statement to Deadline. “There’s a lot of sh*tty things happening in the world that are much bigger than this right now. But it still sucks that we don’t get to see these 15 women in a frame together again.”

It does suck. “GLOW” was a show that, like “Orange is the New Black,” the flagship effort of Mensch and Flahive’s co-creator Jenji Kohan, transcended its gimmick. Taking its inspiration from a short-lived novelty wrestling program from the 1980s, over three seasons “GLOW” developed an ensemble drama in which no one was a bit player. Though in the ring the wrestlers played such offensive characters as “Welfare Queen,” “Fortune Cookie” or “Beirut the Mad Bomber,” they collected layers of dimension as the series progressed. In the process, the show tackled racial tokenization, tortured sexuality — and healthy sex lives — otherkinism, subtsance abuse, class issues and even the Challenger Explosion. And it was always light on its feet, ready to bound onto the canvas with a flourish.

At the center of the show’s substantial Yiddishkeit was Melanie “Melrose” Rosen (Jackie Tohn), a Jewish party girl and brassy narcissist with a penchant for wearing Hanukkah-themed panties sent in care packages by her mother. In one season three episode, Melrose even led the group in a Seder in the Nevada desert. That sequence is undoubtedly the show’s most Jewish, invoking the legacy of the Holocaust in Melrose’s life and movingly linking it to the experiences of her best friend Jenny (Ellen Wong), a survivor of the Cambodian killing fields.

But the show also invoked Jewish cultural history in more nuanced ways. Ruth’s signature character “Zoya the Destroya” was inspired by Gregory (Ravil Isyanov), the owner of the motel where the GLOW girls stayed during training in the first season. Gregory is a Russian Jew who fled his homeland due to religious persecution, a bit of biography Ruth discovered when he hosted the bris of his 18-year-old cousin, a chess champion from the Soviet Union who missed the rite in his home country. And it was at this bizarre family function that Ruth did her character research for Zoya, a phantasm of the red menace. (She also calmed Michael’s nerves by crooning a selection from “Yentl.”)

That Zoya — a cartoonishly belligerent Soviet chauvinist who regularly squares off against Debbie’s all-American “Liberty Belle” — is informed by a refugee from that country is more than a tad ironic. The show has fun with the strangeness of the idea: See the thick accent Ruth draws out of her Jewish subject, and all the Cold War paranoia played for laughs. It was in these choices that “GLOW,” for Jews, felt distinctly “for us and by us.”

But the humor and compassion the show brought to its Jewish subjects wasn’t unique, but rather emblematic of its general approach to underrepresented groups, which it always gave the space to subvert the stereotyped roles they were assigned in the ring. That’s why the show’s finale feels like such a gut punch: The truth is that the project of “GLOW” was just getting started, and those stories — in a crowd of 15 women — were only just beginning to unfold. And it’s part of why the ending is so bittersweet. While Debbie’s promise of a woman-run Eden must, in the world of “GLOW,” remain only that, the show itself realized her vision.