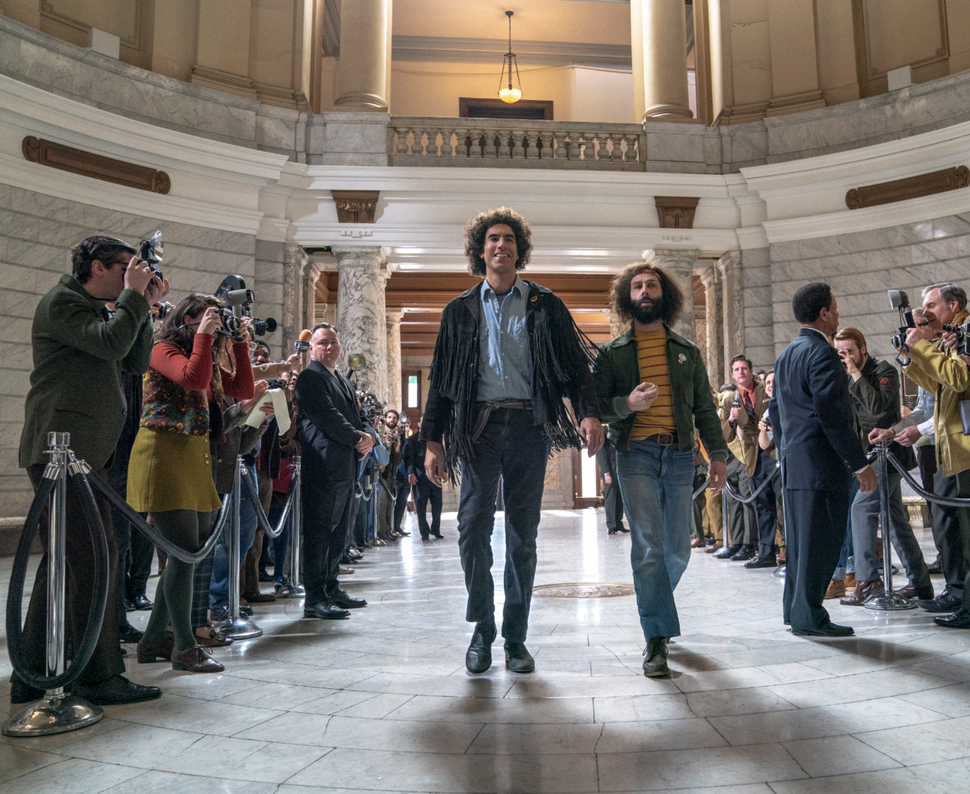 Sacha Baron Cohen as Abbie Hoffman and Jeremy Strong as Jerry Rubin in “The Trial of the Chicago 7.” Image by NIKO TAVERNISE/NETFLIX © 2020

In a recent interview with Variety, Aaron Sorkin revealed how he’d script a speculative end to the Trump presidency. After the election, Sorkin predicted, in the face of a clear win for Biden, Trump will try to claim the Democrats cheated. But then a reckoning arrives.

“For the first time, his Republican enablers march up to the White House and say Donald it’s time to go,” Sorkin said. “I would write the ending where everyone does the right thing.”

Given the author, this twist should surprise no one. For years, Sorkin has been a kind of Frank Capra with walking, drumfire dialogue. With perhaps the exception of “The Social Network,” his finest work in the last decade, his riffs on real life strain to abbreviate that long arc of the moral universe, flexing it toward justice through the sheer force of sophistry and righteous indignation. Every man is Joseph N. Welch, and they all cry “At long last have you no sense of decency” at the earliest opportunity.

In “The Trial of the Chicago 7,” Sorkin’s latest spin through the history books, documenting the kangaroo court of the conspiracy trial against the organizers of the 1968 Chicago Democratic National Convention protests, the red line is first drawn when Black Panther Party Chairman Bobby Seale (Yahya Abdul-Mateen II) is trotted out, bound and gagged, in the courtroom following weeks of disrupting the proceedings. At the first sight of this travesty the prosecution sidebars to say enough is enough.

“Your honor, a defendant is bound and gagged in an American courtroom,” clean-cut prosecutor Richard Schultz (Joseph Gordon Levitt) whispers to the judge through his clenched jaw.

Seale’s case is declared a mistrial. In real life, the mistrial happened, but far from immediately objecting, the prosecution sat by as Seale wore his restraints for several days before being severed from the case for having no part in the alleged conspiracy to cross state lines to incite a riot. We don’t see that, and we don’t hear about Seale’s initial, absurdly long sentence of four years in prison for contempt of court. Such is the joy of Sorkin’s Pollyannaish view of America’s darkest days.

To be fair to Sorkin, who wrote and directed this ensemble opus, he doesn’t elide the brutality of the Chicago police during the summer of ‘68. Scenes to the major flashpoints — protesters charging the hill in Grant Park, Students for a Democratic Society organizer Rennie Davis getting a concussion courtesy of a baton, the infamous barbed-wire-equipped “Daley Dozers” driving toward the crowd — are appropriately bloody. But while the film makes a case for the injustice of the trial (which was successfully appealed in 1970, after a number of indignities faced by the defendants) what the seven organizers and Seale were fighting for gets lost in abstraction and, as some of the activists feared, cults of personality.

Never plodding, the film takes off when SDS leader Tom Hayden (Eddie Redmayne, the one Brit doing a good job at an American accent) and Abbie Hoffman (Sacha Baron Cohen, laboring at a Worcester, Massachusetts brogue and too tall by half) manifest their ideological friction.

A scene towards the end crackles as Hayden, fed up with Hoffman’s theatrics, tells the Yippie leader, “My problem is that for the next 50 years when people think of progressive politics, they’re gonna think of you. They’re gonna think of you and your idiot followers passing out daisies to soldiers and trying to levitate the Pentagon.” (It didn’t quite play out this way, and kudos to Sorkin for resisting his impulse to appear prescient.)

Hoffman counters by claiming that his spectacles supply money and publicity for their cause, “We define winning differently, you and I,” he sneers.

Ultimately they switch roles, proving their adaptability. Hoffman becomes the mostly reasonable orator (or Sorkin mouthpiece) and Hayden performs a stunt paying tribute to the fallen soldiers in Vietnam for whom they protested.

Yet this payoff, despite its well-calibrated sense of justice, falls flat even as it receives a round of applause from the court’s gallery, and even Schultz. Prior to that, the cost of the war is only glimpsed in newsreel footage, or in a telecast of scrolling names of dead soldiers played to a soundtrack of “Taps.” While these nods to the conflict seem designed to mount into a final shift in focus to what’s truly at stake, they are too discreet to to be felt when they’re finally made overt.

The film is otherwise none too subtle and by turns a bit ridiculous, even for its farcical source material. Hoffman, Jerry Rubin (Jeremy Strong, sounding like Bill and Ted and far too sedate for the firebrand) and legendary civil rights lawyer William Kunstler (Mark Rylance, with a Bronx accent by way of the South and Midwest) wear Halloween wigs. Jew-fro hairpieces are tricky, I suppose.

Many scenes seem earmarked to comment on particular issues. Police and mob violence against Black people is covered, effectively, when Kunstler and Hayden meet Bobby Seale in prison to tell him of the shooting of his Black Panther comrade Fred Hampton. Surveillance of the organizers during the convention comes courtesy of a fictional FBI agent who seduces Rubin (“You don’t send a woman to ensorcell me,” Rubin charges the defense, improbably teaching Hoffman a new word). When the glass shatters at the Haymarket Lounge, where power players dined oblivious to the protests, the breached window is literally referred to, by Hoffman, as an “unnecessary metaphor.”

In the end, like the trial and the media circus it attracted, the proceedings are too busy and reductive to cohere into a satisfying whole, handling the many issues and events in a piecemeal fashion within a thriller-like structure of reveals and reversals. It’s hard to cram in all of the context of the late ‘60s, which is why previous films on the convention, like Haskell Wexler’s “Medium Cool,” which “Chicago 7” lifts footage from, took an oblique view that benefited from recency.

And so Sorkin unifies his film with moral paradigms. The unqualified baddies — like Judge Julius Hoffman (Frank Langella) — are incompetent and unmovable. The clowns, like Abbie Hoffman, can be serious when times demand it. The capable — Hayden and Schultz — have breaking points where they stray from their principles for the greater good. This ostensible complexity in the latter categories is a nifty trick before you catch on. And in “Chicago 7,” we see perhaps the clearest evidence of this quirk of the auteur’s whole canon.

Sorkin is, from his earliest courtroom drama and first hit, “A Few Good Men,” really a first rate polemicist moonlighting as a dramatist and his characters too often become vehicles for his own philosophy or his particular bugbears. His moral perspective, conveyed through op-ed-like monologues, can be bracing, naïve and at times cloying. When nearly all of his characters are on the cusp of taking a stand, it’s hard to give anyone a standing ovation.

His unwavering belief in decency, that people who display a pattern of bad faith are just one infraction away from playing the part of Mr. Smith in Washington, flies in the face of the facts. I’d love to believe it’s true, but history shows that it’s a long path to progress, and some delight in laying down roadblocks.

“The Trial of the Chicago 7” is available on Netflix October 16.