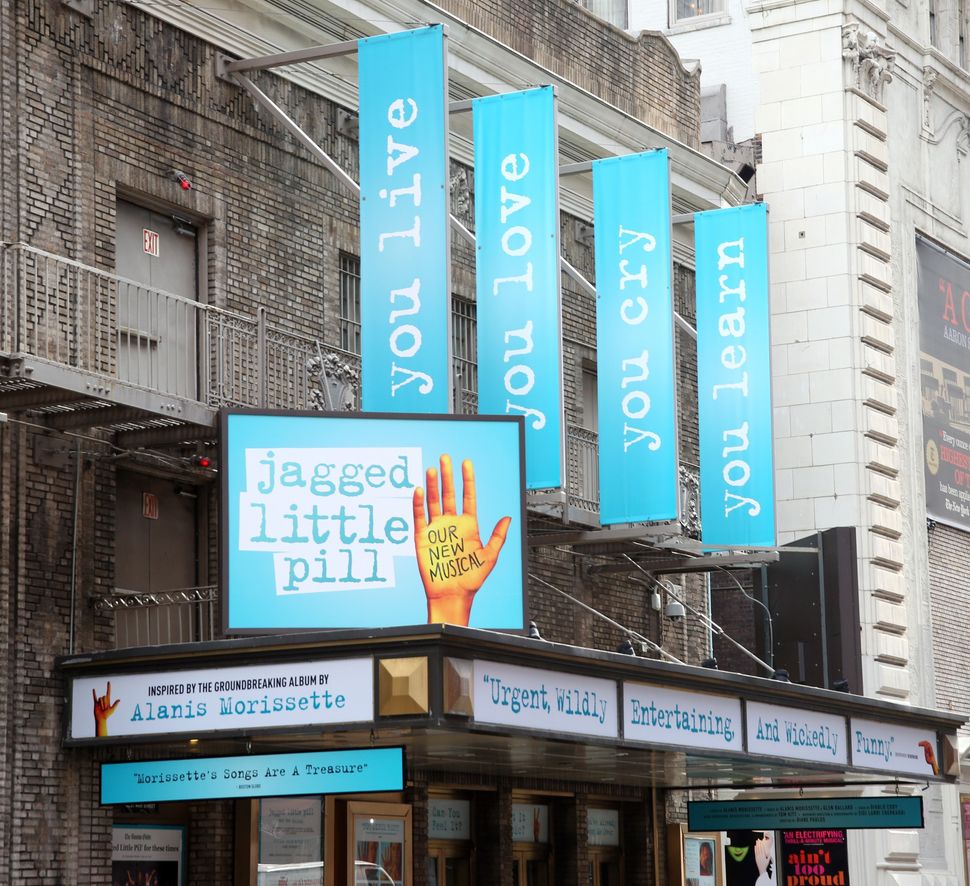 The marquee for “Jagged Little Pill,” the multi-Tony nominee that, like all other Broadway shows, closed due to Covid-19. Image by Getty/Walter McBride/Contributor

The 2020 Tony Awards, like weddings, vacations, work commutes and so much of the other stuff of life, went missing this summer. But, the show must go on — however belatedly. The nominees for this year’s ceremony were announced Thursday and like so much else in this strange new normal, they are incomplete but also intriguing to behold.

Because of the limited window for eligibility and Broadway’s abrupt closure last spring, only three musicals, “Tina: The Tina Turner Musical,” “Moulin Rouge! The Musical” and “Jagged Little Pill,” based on the discography of Alanis Morissette, are in contention. Shows like “Six” and “The Girl from the North Country” didn’t qualify owing to a new cut off date of opening; “West Side Story” and “Company” missed the mark for Revival of a Musical, a category not included this year since no eligible shows opened by February 2020. Because of the narrow field, “Jagged Little Pill” has 15 nominations — that’s only one less than freakin’ “Hamilton!”

That’s not to say that the show, which received rave reviews, isn’t deserving. But in this weird reality where Broadway won’t reopen until May of next year, few viewers have had the chance to judge any of the shows for themselves — and may not have the opportunity. So, while the Tonys, long lambasted for deciding winners based on commercial considerations (favoring still-open shows to draw more revenue) is perhaps beyond reproach with its picks in this instance. And yet still, there are some unfair advantages emerging from limitations.

Take the Best Actor in a Musical category. Aaron Tveit, who isn’t Jewish, despite sharing a first name with Moses’ brother and having a last name that sounds vaguely like Tevye, is the only nominee for his role as Christian in “Moulin Rouge! The Musical.” Tveit, who himself caught COVID-19 and has since recovered, may well win his first Tony by default — provided 60% of Tony voters approve.

Another strange development arrives in the nominees for Best Score. For the first time, the usually competitive category for musicals has precisely no musicals, as all three musicals nominated for Best Musical are jukebox shows. This is good news for Best Score nominee Daniel Kluger who shares the name of this dude with a CD of Jewish ballads — who may or may not also be this noted Israeli author of detective fiction. Kluger is up for his score for “The Sound Inside” and is also nominated for Best Sound Design for that play and for the two monologue show “Sea Wall/A Life.”

The Best Play category comes closer to a normal slate of nominees. Among the shows is “Grand Horizons,” a play likened to the work of Neil Simon. Its playwright, Bess Wohl, rented out Katz’s for her wedding reception (Ivanka Trump was a guest). Also nominated are the much-buzzed-about “Slave Play,” which transferred from off-Broadway last year, and Matthew Lopez’s E.M. Forster-inspired epic “The Inheritance.” Lopez, who won an Olivier Award for the show, found early success with his drama “The Whipping Man,” which imagined an encounter between recently freed Black Jewish men, who were enslaved, and their former Jewish masters on Passover 1865, which began the day after General Lee’s surrender.

Among the nominees for Best Revival of a Play is Harold Pinter’s “Betrayal,” which was last revived in 2013 with Rachel Weisz and Daniel Craig directed by the late, great Mike Nichols. The Jews are gone this time around, but director Jamie Lloyd, scenic designer Soutra Gilmour lead actor Tom Hiddleston are nominated in their respective categories.

Hiddleston isn’t the only soulful-eyed member of the Marvel Cinematic Universe up for Best Actor. Jake Gyllenhaal is nominated for his half of “Sea Wall/A Life.” In the monologue “A Life,” Gyllenhaal plays a guy named Abe (ABE!), preoccupied with the death of his father and the birth of his first child.

We’re pulling for David Alan Grier, receiving his fourth nomination, this time for Actor in a Featured Role in a Play. Grier isn’t Jewish, but he is one half of this indelible sketch.

In musicals, Danny Burstein is up for Actor in a Featured Role, for playing Harold Zidler, the owner of the famed Paris cabaret in “Moulin Rouge! The Musical.” It’s his seventh nomination — here’s hoping it can be his first win. Burstein’s up against Derek Klena in “Jagged Little Pill.” We don’t think he’s a landsman, but he did post this invitation to some sort of Jewish mixer on Twitter. Meanwhile, Daniel J. Watts, who played Ike Turner in “Tina – The Tina Turner Musical,” was spotted singing “Go Down Moses” at a lavish “showbiz Seder” in 2018.

David Cromer, who last won Best Director for “The Band’s Visit” is up for his direction of a play this time with “The Sound Inside.” And while there were no new needle drops in the musical category this time around, Best Orchestrations boasts a formidable lineup with no easy tasks.

Tom Kitt, who won his Pulitzer for “Next to Normal,” took on the catalogue of Alanis Morrissette in “Jagged Little Pill.” He won a Drama Desk for his orchestrations earlier in the year. While Kitt was adapting one musician’s work for the stage, a quartet of orchestrators were at work on “Moulin Rouge,” a show that, in one number, synthesizes decades of love songs across all manner of genres. The nominees for the show are Katie Kresek, Charlie Rosen, Matt Stine and Justin Levine.

So far, there’s no date set for the ceremony, which will be digital, and, one hopes given the dearth of nominees, short.