‘Hadestown,’ ‘Tootsie’ and ‘The Ferryman’ Lead The 2019 Tony Awards Nominees 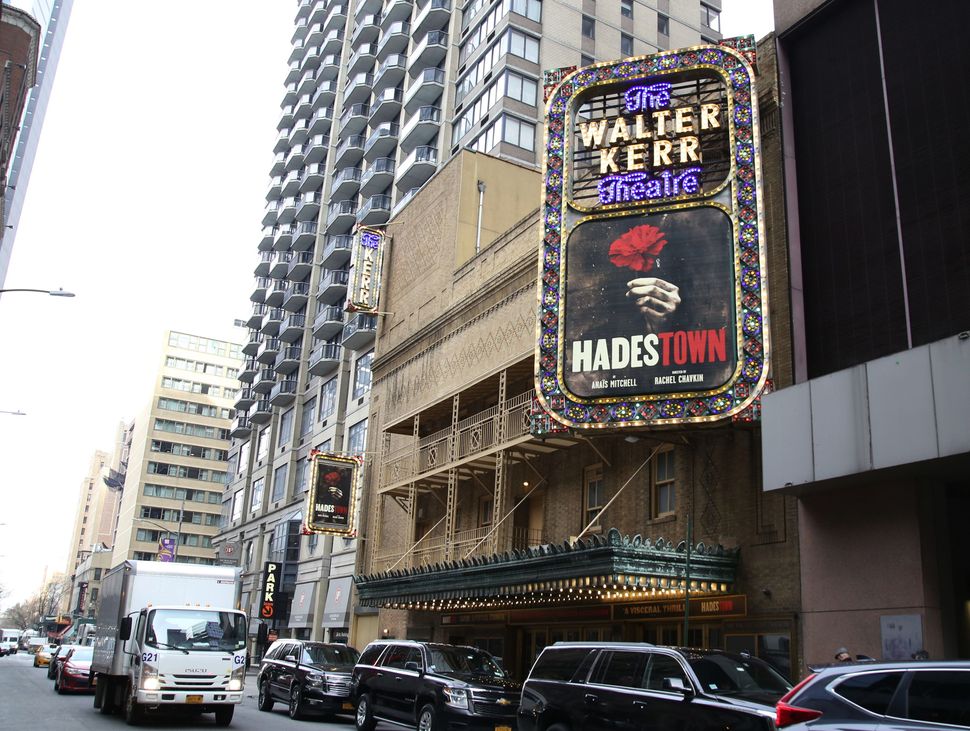 Theater marquee unveiling for “Hadestown”, a musical by singer-songwriter Anais Mitchell and directed by Rachel Chavkin Image by Getty/Walter McBride/Contributor

A folk ballad riff on Greek myth, a family divided by the IRA, a “mad as hell” newscaster and two men who dress in drag for two very different reasons. The most diverse Broadway season in recent memory has made for an eclectic ballot of 2019 Tony nominees.

The Tony Award’s announced its nominees April 30 with Anaïs Mitchell’s “Hadestown” leading the pack with 14 nominations. The musical, which reimagines the story of Orpheus and Eurydice, received nods for director Rachel Chavkin, Best Musical, Best Book and Best Score of a Musical for Mitchell and acting nominations for lead actress Eva Noblezada and featured actors André De Shields and Patrick Page.

The Temptations jukebox musical “Ain’t Too Proud” trails “Hadestown” with 12 nominations including Best Musical. Composer and lyricist David Yazbek, who took home Best Original Score last year for his work on “The Band’s Visit” is also in contention for his work on “Tootsie,” an adaptation of the 1982 Dustin Hoffman-led film. “Tootsie” is in a strong third place for most nominations with 11, including Best Musical and Best Performance By a Leading Actor for Santino Fontana, of “Crazy Ex-Girlfriend” fame.

There are only two musicals nominated for best revival this time around, one conventional and another starkly-staged. Cole Porter’s “Kiss Me Kate,” with a book by those famous fighting spouses Bella and Samuel Spewack is in the running for a production directed by Scott Ellis (also nominated for Best Director for “Tootsie”). Rodgers and Hammerstein’s “Oklahoma,” directed by Daniel Fish and striving to emphasize otherist themes, has nine nominations including one for Fish.

“Oklahoma” also touts a Best Lead Actor in a Musical nom for Damon Daunno who has some stiff (read: as a corpse) competition in Alex Brightman, nominated for his turn as the titular ghoul in “Beetlejuice.”

Non-musicals have an outstanding showing this year, including some upsets.

Aaron Sorkin’s adaptation of Harper Lee’s “To Kill a Mockingbird” has nine nominations, including Best Performance by an Actor in a Leading Role for Jeff Daniels’s Atticus Finch and Best Direction of a Play for Bartlett Sher, but fell short of a chance at Best Play. The contenders in that category include Sam Mendes’s production of Jez Butterworth’s “The Ferryman,” about a large Irish family haunted by the disappearance of one of their own during the Troubles. ”The Ferryman,” which won the Olivier Award in England, ties “Mockingbird” with nine nominations, including one for Mendes and for lead actor Paddy Considine.

Another Paddy (Chayefsky) is also in the conversation with an adaptation of the late writer’s film “Network” nominated for five awards. Bryan Cranston, who won a Tony for his 2014 portrayal of Lyndon B. Johnson in “All the Way,” is up for Best Actor in a Play for his role as demagogic anchorman Howard Beale. Belgian director Ivo van Hove, who won two 2016 Tonys for his revival of “The Crucible” is nominated for his direction. In the Play Revival lane, Arthur Miller’s career-making drama, “All My Sons,” is up for best remounting in a new rendition directed by three-time Tony winner Jack O’Brien. Oscar-winner Annette Bening is up for her role of Kate Keller in the production, and will compete in the Best Actress category against the one-time boss of her husband, Warren Beatty, “Ishtar” director Elaine May, who is favored for her role in Kenneth Lonergan’s “The Waverly Gallery.”

In the Design field Santo Loquasto, Woody Allen’s regular production designer, is nominated for his scenic work on Taylor Mac’s Best Play nominee, “Gary: A Sequel to Titus Andronicus.” That play also received attention for Ann Roth’s costume design. Roth is one of two costume designers competing against themselves, with another nomination for Best Costume Design of a Play for her work on “Mockingbird.” William Ivey Long is nominated for Best Costume Design of a Musical for “Hadestown” and “Tootsie.”

The Tonys announced that two-time Tony-winning actress Judith Light will be honored with the Isabelle Stevenson Award for her activism HIV and AIDS activism.

‘Hadestown,’ ‘Tootsie’ and ‘The Ferryman’ Lead The 2019 Tony Awards Nominees