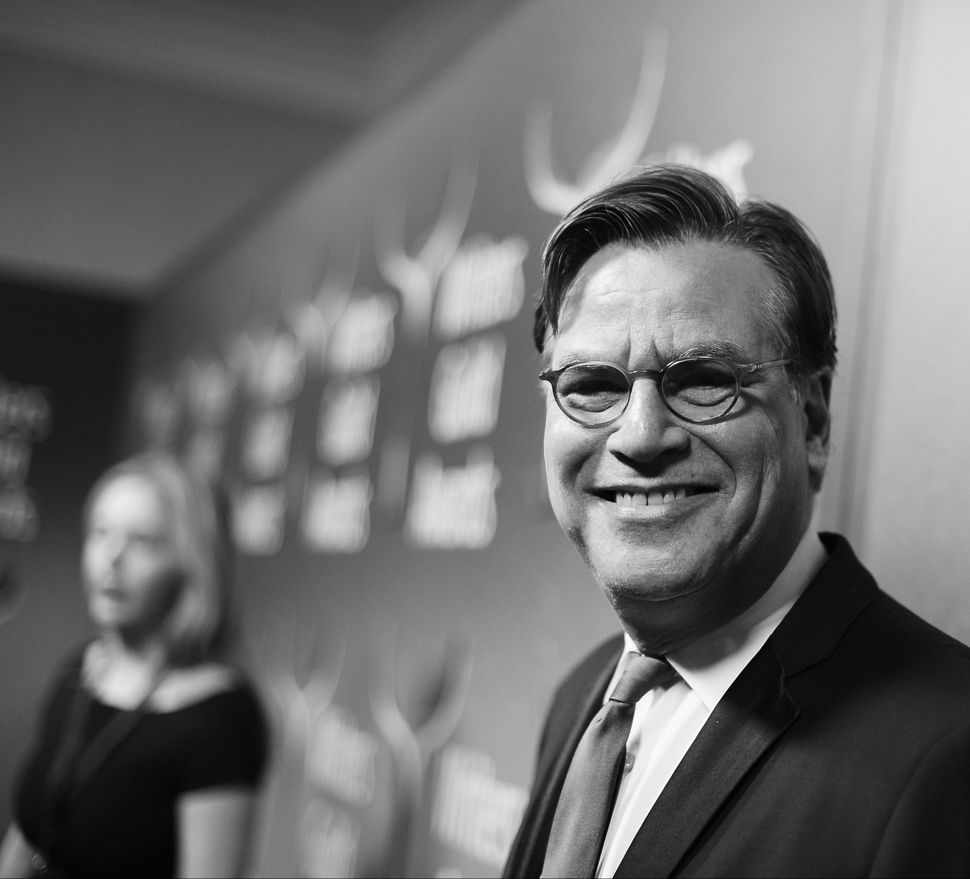 What to do about Aaron Sorkin?

The writer and director was once a voice of liberal America. We swooned over the grand ideals and political savvy of President Bartlett and his coterie of advisors on “The West Wing.” A 2012 clip from “The Newsroom” in which Jeff Daniels, as news anchor Will McAvoy, tears down the idea that the United States is the greatest country in the world? It went viral, a rebuttal of the movement to “Make America Great Again” long before that movement had its own president to worship. Sorkin’s 2010 film “The Social Network” took a critical eye to Facebook years before its reputation took a public plummet amid scandals over privacy, foreign election interference and the platform’s tolerance of hateful rhetoric and false news reports.

Yet in recent years, Sorkin has appeared to stumble. This January, for instance, appearing on Fareed Zakaria’s Sunday morning CNN show, Sorkin lauded “the new crop of young people who were just elected to Congress,” then said “They now need to stop acting like young people, okay? It’s time to do that now.” The comment, largely interpreted as a reproach of new legislators like New York’s Alexandria Ocasio-Cortez, drew ire, including from Ocasio-Cortez herself. “Ever wonder how expression that’s feminine, working-class, queer, or poc [person of color] isn’t deemed as having ‘gravitas,’ but talking like an Aaron Sorkin character does?” she wrote on Twitter.

The question Ocasio-Cortez raised — of whether or not Sorkin and his peers truly respect the newly powerful voices of people not historically afforded real political weight — provides interesting context for Sorkin’s adaptation of Harper Lee’s “To Kill a Mockingbird,” which opened on Broadway this past December. In the play, directed by Bartlett Sher, Sorkin has expanded the roles of Tom Robinson and Calpurnia, the novel’s only black characters, and made Atticus Finch, in Lee’s novel a saintlike crusader against racism, a creature with profound moral flaws.

For a book often upheld as core to America’s progressive conscience, the changes were radical, a chance for Sorkin to assert ideas about America in a new way. His adaptation has met a mixed reception, gaining nine Tony Award nominations but notably not earning a nod for the top prize of Best Play. We spoke in March at the Four Seasons in Manhattan; the following conversation has been edited for length and clarity.

Aaron Sorkin: It shifts it a lot. Here’s how I got there. [Producer] Scott Rudin called me about three years ago; he had finally acquired the stage rights to “To Kill a Mockingbird.” He said, “I want you to write a play.” I thought, this is a suicide mission. What could I do but make it less than what it was?

My first draft was terrible. I took all the scenes needed to tell the story, and I stood them up. Scott gave me the note that would send me in the right direction, which is that Atticus can’t be Atticus from the beginning of the play to the end of the play. He was right: The protagonist has to change. The protagonist has to have a flaw. How did Harper Lee get away with having an Atticus that was the same from the beginning of the book to the end?

The answer is what you said: Atticus isn’t the protagonist in the book or the movie. Scout is.

I wanted Scout and Jem and Dill to be protagonists, but I wanted Atticus to be the central protagonist. That meant Atticus was going to have to have a flaw. [And] I realized that he already had a flaw; it’s just that when we were reading the book, it was taught to us as a virtue. And that was that Atticus believes there’s goodness in everyone, and [if] you crawl around inside someone else’s skin you’ll discover that their point of view is valid. I couldn’t help but feel there was something too similar between what Atticus was saying and “There are fine people on both sides.”

Of course, there’s a big difference, which is that Atticus’s belief is coming from a good place. It suddenly made the story very relevant, if Atticus tolerated intolerance.

Do you think the story is richer for that reestablished relevance?

There was one line I cut during previews. It came at the end of the first act; [Sher and Rudin] felt this was the one moment where it feels like we were unzipping the play and saying “This is about today.” The Klan’s been thwarted — they wanted to lynch Tom Robinson — and Bob Ewell, before he leaves, used to say to Atticus “Don’t ever underestimate the rage that runs just beneath the surface of ordinary people. That rage can turn itself into a revolution. You know how I know? Cause it always does.”

There was just a feeling that that was written especially for the Trump years. So I cut it.

This isn’t the first time you’ve written about a fundamentally decent man in the middle of a moral quandary. I’m curious about what makes Atticus different, aside from the fact that you adapted him from a character someone else had already written.

I like writing not about the difference between bad and good, but between good and great. You take a fundamentally decent person, somebody you’d trust with your kids, and test him or her.

The difference with Atticus is that most people are coming into the theater already knowing the book, or the movie, or both. They know Atticus well. People say the same thing: He’s my father. I get to leverage those expectations in a way that I think challenges the audience.

The first thing that happens in the play is the curtain — it’s really a wall — goes up. You thought you were going to be looking at a front porch or a bucolic street, [but] in fact you’re looking at a space that resembles a warehouse nobody has visited for 60 years. Windows are broken, paint is peeling. And Scout says “Something didn’t make sense.” We’re saying to the audience [that] we’re going to question everything you talked about with your eighth grade English teacher.

What was the first time in your life that you became aware of racism in this country in a way that brought it home for you, emotionally?

It came very late in my life. It should have come earlier. I grew up in Scarsdale. Scarsdale High School had about 1,200 students. When I was a senior, there were four black students in my high school, belonging to two families.

After college I moved to New York, and my experience with racism was watching it in the movies. The director George C. Wolfe — he’s one of theater’s greatest directors, he’s black — he was at the time the artistic director of the Public Theater. A friend of mine was in rehearsal [there], and I was meeting him for a beer at maybe 10 at night. I got there a few minutes early, [and] George is going home for the night; we just said hello as he passed. Maybe 15 minutes went by when he walked back in, came up to me, and very quietly said “Can I ask you a big favor? Could you come outside and hail a cab for me?” I thought, are you telling me that George Wolfe, the artistic director of the New York Shakespeare Festival can’t hail a cab standing in front of the Public Theater?

I began to understand that when I walked down a street at night in New York — I bartended in Broadway theaters and lived in Hell’s Kitchen, just at the beginning of gentrification — anytime I saw a couple of policemen standing on the corner I got happy. That made me feel safe. I was suddenly aware that black friends of mine, when they saw a police officer, that made them scared. Scared of the people that were supposed to make them safe.

A couple of times a week — this is going to sound horrible, but I’m recommending it to everyone in America — I’ll check the comments section of Breitbart. Everyone should do it, to understand how real this is.

Did you speak with anyone else about crafting the characters of Tom and Calpurnia?

Is the question you’re asking me did I speak to black people to write the black characters?

That’s part of the question. But the general curiosity is, everyone else in the play you had a solid character to work with from the book. These two characters you could do anything with. Which is a lot to take on, when you’re working with something really classic.

I worship at the altar of intention and obstacle. It’s what Aristotle taught us in 350 B.C. Somebody wants something; something’s standing in their way of getting it. Once I understood what Tom and Cal’s intentions and obstacles were, they were just two more characters. Once we were in rehearsal, there are four African American members of the cast. I absolutely wanted to hear what they had to say. I wanted to make sure they had a direct channel to my ears. But I didn’t want to treat them as experts on blackness, or make them feel like the most important thing about Cal [or Tom] is that they’re black.

Here are two characters, and you want to give them agency. My favorite scene in the book — it’s a lot of people’s favorite scene in the book — is the scene at the end of the trial. The whole courtroom has emptied out except for Atticus, who’s putting his stuff back in his briefcase, and everybody up in what they call the colored section. People in the colored section are standing silently out of respect for Atticus. As he walks by, the Reverend Sykes turns to Scout, who’s sitting up there with them, and says “Stand up, Miss Jean Louise, your daddy’s passing.”

I love this scene. I asked myself why, and I was troubled by the answer, which is that that crowd should be rioting in the streets. They should be burning the courthouse down; they should be chanting “No justice, no peace.” Instead they are docile, standing in respect for the white liberal guy who tried to save them. It made me think that is what us white liberal guys want; we want marginalized people to say “You’re one of the good ones.”

There’s a fundamental hopefulness to the play. Do you share that hopefulness?

Yeah, I mean, I have to. Listen, in terms of writing, I like writing romantically and idealistically. I like looking up. It’s a nice thing that you can do in theater. And personally, I do share that hopefulness. I think it’s definitely being tested right now. We’re all Job. But the world only moves in one direction, and it’s good.