Is Orpheus And Eurydice A Myth About Political Power? In ‘Hadestown,’ Absolutely. 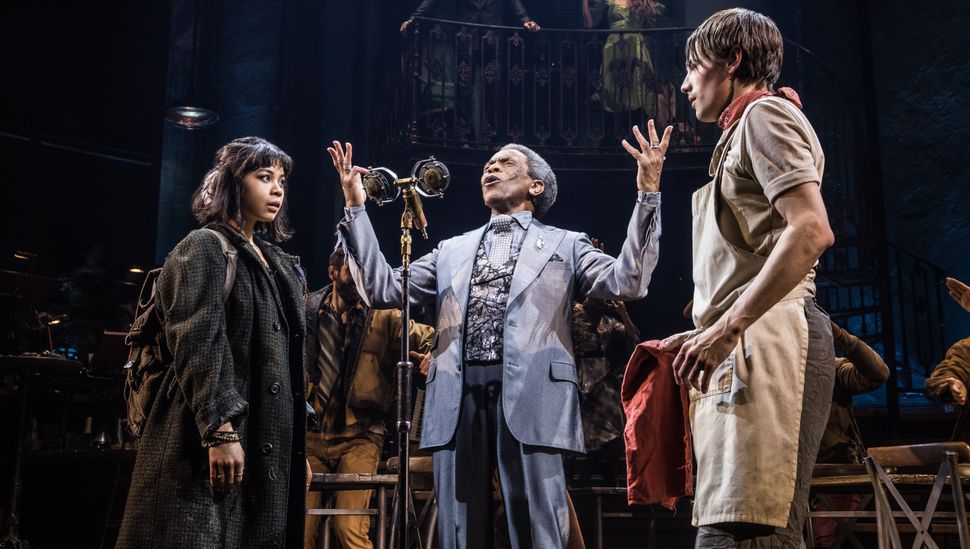 Editor’s note: On April 30 ‘Hadestown’ was nominated for 14 Tony Awards, the highest number of any eligible Broadway show.

Orpheus and Eurydice: You know the story. They fall in love, Eurydice dies, and Orpheus, a musician of astonishing talent, follows her to the underworld, hoping to rescue her. His music so moves Hades, god of the underworld, that he lets Eurydice go with one caveat: Orpheus must not look back at her while they walk back to the land of the living. If he does, she’ll return to Hades forever.

Orpheus holds out for most of the journey, but at its end, unable to hear Eurydice’s footsteps and worried that he’s been tricked, he looks back. What happens next, after Eurydice is spirited back to the underworld, differs among versions of the story. But most agree that Orpheus, overwhelmed by grief, dies shortly after finishing his journey alone.

Not “Hadestown,” Anaïs Mitchell’s musical interpretation of the myth. Mitchell conceived of “Hadestown” as a community theater project in Vermont in 2006, turned it into a studio album in 2010, and finally, with director Rachel Chavkin, shaped it into a theatrical production that premiered at the New York Theatre Workshop in 2016 and opened on Broadway on April 17.

In “Hadestown,” the story of Orpheus and Eurydice is still tragic. But its end is full of wonder and hope. Eurydice is dead, yes. But Orpheus, with his music, has set in motion a reunion between Hades and his wife Persephone, whose discord has thrown the world profoundly out of balance. Spring and fall have ceased to exist, leaving humanity to struggle through hectic extremes. After Orpheus plays a song that reminds the bickering couple of the early days of their love, then departs with Eurydice following close behind, Persephone asks Hades if the two of them should give things another try. “It’s almost spring,” he replies.

Orpheus fails in one quest — rescuing Eurydice — and succeeds in another. When he meets Eurydice, he tells her of a song he’s writing that he believes will restore the earth to order. Profoundly connected to nature, he’s obsessed by the task, so much so that he doesn’t notice the extent to which he’s left Eurydice on her own when it comes to ensuring their survival. He loses her, but fulfills the cosmic mandate he’s set himself. His tragedy, in Mitchell and Chavkin’s view, heralds a sense of progress.

That’s true not just on earth, but also in Hadestown, where Orpheus’s attempted rescue of Eurydice instills a long-absent sense of hope in the souls whom Hades has enslaved.

“The purpose of myths is that we refashion them for our moment,” Chavkin, a 2017 Tony nominee for her direction of “Natasha, Pierre and the Great Comet of 1812,” said in an interview. “The original myth was about someone so overtaken with grief that they tossed off all laws of the space-time continuum to try and get their lover back. I think the thing that Anaïs has teased out of the myth, that was kind of latent there, is that if Orpheus is able to do this, then conceivably other people in Hades, or Hadestown, could also reverse their fate and take this ascent back to the world of the living.”

Yes, those lyrics really do date back to 2006. In the modern moment, their diagnosis of the semi-hypnotic power of unsubstantiated mantras about security can feel almost too on-the-nose to be persuasive. But tyranny is always about the building of walls, whether literal or metaphorical — walls of suspicion between neighbors, between neighboring states, between souls who otherwise might work in positive concord. So while Hades happens to be building a very physical, very timely sort of wall, his work stands in for the more fundamental mission of despots.

In showing the potential for a crack in Hades’s wall — one which Persephone, Orpheus’s twin spirit in the show, earlier alludes to — “[Orpheus] opens up all of the certainties about this totalitarian state,” Chavkin said. And even though he fails, “Hadestown” leaves open the question of whether Hades might become a more benevolent ruler. Early in the show, Hades proclaims that he’s created his industrial underground nightmare both out of spite toward Persephone and in an effort to show her the strength of his commitment to her. “Lover, everything I do,” he sings to her, after she criticizes the hellish factory he’s created, “I do it for the love of you.” With that love regained, and spring arriving for the first time in years, is the fate to which Eurydice and her fellows are consigned as dire as it might have been had Orpheus not sought to redeem her? There’s no concrete answer.

But there is a suggestion. “Hadestown” differs from its source text in one substantial way, which is that the telling of the myth is as much a part of the show’s story as the myth itself. Set in a run-down jazz club based on New Orleans’s Preservation Hall, the show places almost the whole cast onstage for its complete duration, alongside the band. (“There’s this sort of very New Orleans jazz feel of the score,” Chavkin said, explaining the setting.) When a given character isn’t performing, they’re watching, and often either cheering or heckling. After Orpheus loses Eurydice, the show doesn’t end. It turns to a moment of reflection, with the rest of the cast, who have watched the duo’s ill-fated journey unfold, joining in. The effect is such as to make it unclear if the story is actually happening onstage, or if the characters have simply gathered to tell it to one another, then become so immersed in their narrative as to inhabit it in a way that mimics life.

“It’s a sad song,” sings Hermes, who serves as the show’s narrator. “But we sing it anyway.” The band begins to pick out a quite melody in a major key. “‘Cause here’s the thing,” Hermes says. “To know how it ends, and still to begin to sing it again, as if it might turn out this time.” And then he starts to tell the story again. The trombone picks up. The cast exhales gently, all at once, and their breath rushes through the theater like a breeze. It is a bit like going to church.

“I love performances that admits this is an act of collective hallucination,” Chavkin said. “We’ve talked about images of, like, a hurricane party, where you have a shut-in and everyone gathers around a candle to tell an old tale.” “Hadestown” ends on much the feeling of relief as comes after surviving a storm, even with the knowledge that others will follow it. Even as Hermes begins to retell the story, the mood is different. “Everybody looked and everybody saw that spring had come again,” he sings.

And Eurydice reappears to restart her story. She lives in the myth, so there’s no need to worry about what happens to her after its conclusion. The point is the hope with which Orpheus leaves the world, a variant of the hope that he gave Eurydice, the hope that made her sing, upon meeting him, “for a moment I forget just how dark and cold it gets.” The hope that Hermes references when he sings of telling the same story, again and again, always with the idea that this time the result might change.

And just as Orpheus, in spite of tragedy, accomplishes something bigger than he set out to, in “Hadestown” that motivating hope is bigger than the tragedy in which it’s contained. It reaches into the audience; by the time the curtain goes down, they’ve become part of the story by virtue of listening to its telling. They’ll leave, and tell someone else. I’m telling you right now. It’s all very human, this way of sharing not just a story but the emotion it builds: The hope, the grief, the hope again. It’s an awfully good way, in the end, of taking down some walls.

Is Orpheus And Eurydice A Myth About Political Power? In ‘Hadestown,’ Absolutely.