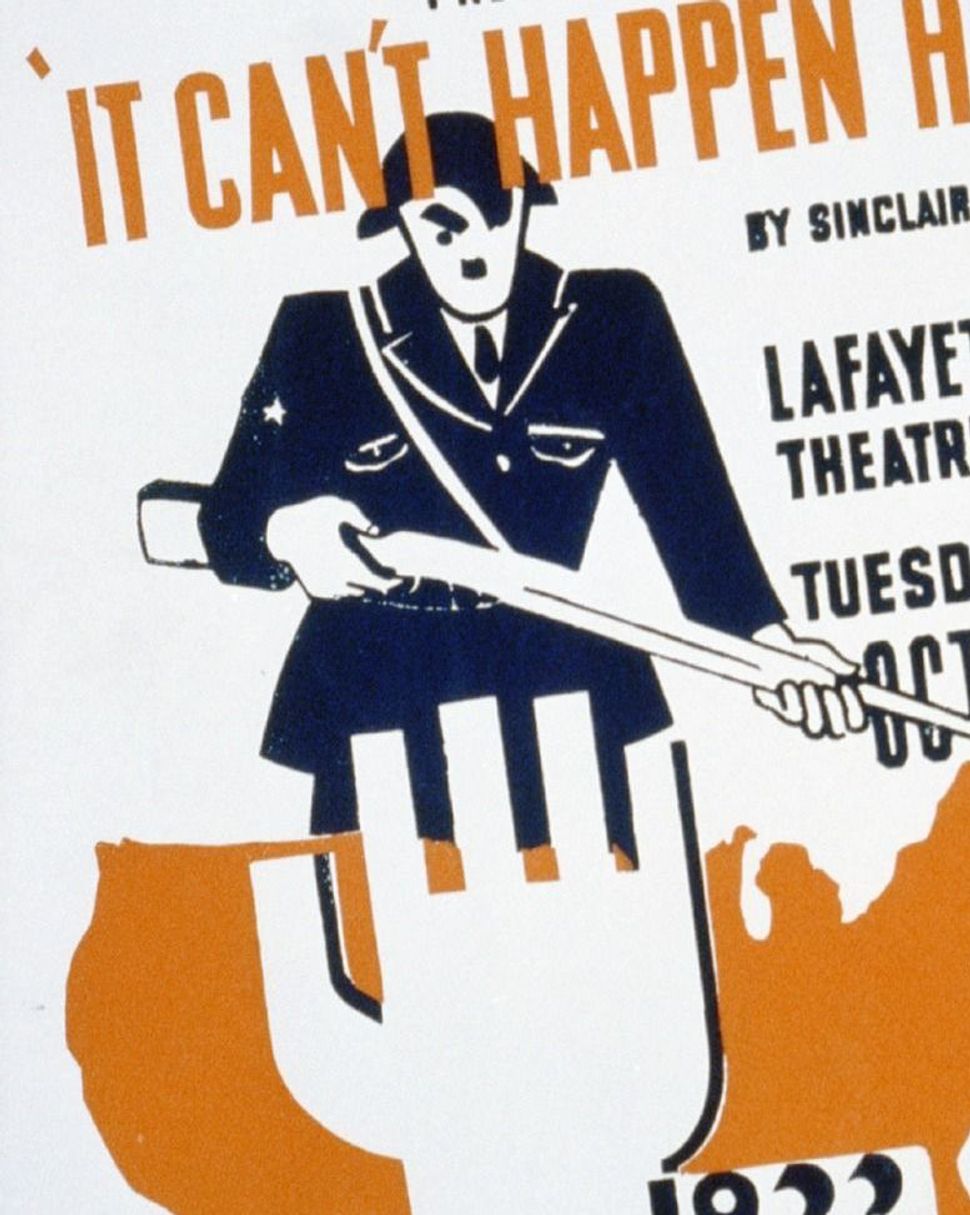 A poster for the 1936 production of “It Can’t Happen Here.” Image by Wikimedia Commons

In 1936, as the United States struggled to overcome the Depression, Hitler pressed ahead with his revival of the German military and fascist forces in Europe continued to erode the norms of public life, Sinclair Lewis debuted the theatrical adaptation of his 1935 novel of “It Can’t Happen Here.”

Co-written with playwright John C. Moffitt, the play, a flagship endeavor of the New Deal Federal Theatre Project, imagines an America taken in by a folksy dictator complete with a devoted militia and concentration camps earmarked for his detractors. Its definitive-sounding title was, in fact, one of doubt, reflecting the characters’ naive faith in steadily weakening American institutions. Now, 84 years and a day after the play debuted simultaneously in 21 theaters in 17 states, “It Can’t Happen Here” will be revived by over 60 actors from nine theater companies performing in Yiddish, English, Spanish, Turkish, Italian and Hebrew, bringing the play’s speculative view of American fascism to a newly perilous moment in history. While all the companies are New York-based, many have links to nations that have long histories with authoritarianism.

At the time of the play’s original debut, said Motl Didner, associate artistic director of the National Yiddish Theatre Folksbiene, “it really wasn’t clear what direction America was going to go in — whether it could follow in Europe’s footsteps.”

Before the coronavirus pandemic, Didner discovered a Yiddish translation for the play that was first performed by the Yiddish company ARTEF in 1936, and planned to present it as a reading. Its concerns were topical, Didner said, reflecting a resurgence of strongmen throughout the world, and once more raising the question of whether America was truly insulated against those impulses. 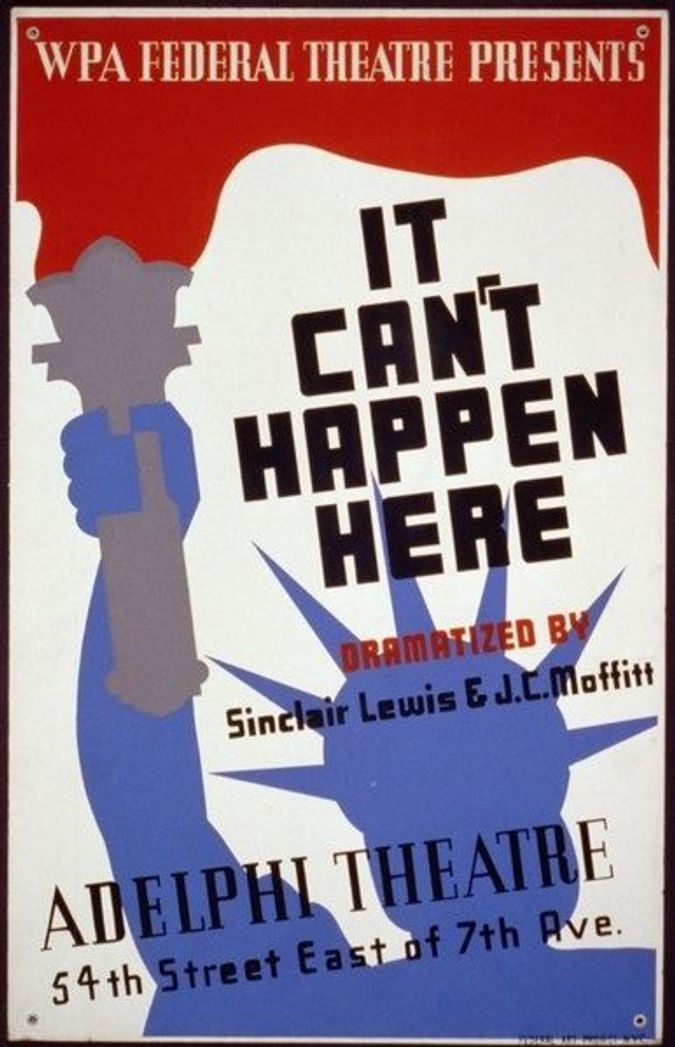 A poster for the 1936 Adelphi Theatre staging of “It Can’t Happen Here.” Image by Wikimedia Commons

But when the pandemic shuttered the Folksbiene, along with most of the country’s theaters, the history of the original production suggested a new, more collaborative way forward.

In June, Didner met with Voza Rivers, executive producer of the New Heritage Theatre Group, the oldest Black nonprofit theater in New York City. As a custodian of Harlem’s history, Rivers remembered the Federal Theatre Project and its sponsorship of Orson Welles’ groundbreaking all-Black production, “Voodoo Macbeth,” which provided work for 150 actors and drew a cash-strapped audience to the theater. That production was a sensation, and Rivers wondered if it might be time for a return to that kind of innovative opportunity for artists, now facing the worst economic downturn since the Great Depression and a moment fraught with political turmoil.

“I just mentioned it to Motl,” Rivers said. “Little did I think that Motl would also go back to 1936 in reference to what was happening today and come up with the play ‘It Can’t Happen Here.’” The two quickly developed the idea of a multi-theater video presentation of the play, hoping to tap into not only modern political concerns, but also the ideal of broad artistic development presented by the Federal Theatre Project.

For Rivers, whose theater was founded during the Civil Rights era, the play’s concerns are both timely and evergreen, speaking not just to the era of the play’s first production, but to current modes of social unrest and systemic racism.

“What happened back then is almost repeating itself with what is happening here today,” Rivers said.

The timing of the original production, which debuted just weeks before an election — and places its early scenes in the leadup to populist dictator Buzz Windrip’s campaign victory — is mirrored in 2020 by another pivotal vote, which will decide between two different courses for America.

Didner, Rivers and their collaborators aren’t the only theatermakers to find this moment an apt one in which to return to Lewis. Earlier this month, New York’s Roundabout Theatre Company debuted a radio production of “It Can’t Happen Here,” in collaboration with over 100 American theaters. But the Folksbiene and New Heritage-led video performance brings the play’s meditation on fascism to a broader canvas by choosing partners who, performing in a diverse set of languages, evoke an international resonance. That choice helps turn a play about America into a story about any seemingly stable country’s susceptibility to repressive dictatorships.

“All of these different groups have very different historical relationships to the material,” Didner said, “Kairo’s Italy theater, they certainly know. Turkish American Repertory Theater — that country has a dictator in power right now. Repertorio Español — not only in Spain, but throughout Latin America, there have been dictators.”

Perhaps most meaningfully, Lewis and Moffitt’s play tips a hat to the slow process by which dictatorships traditionally take hold.

“They talk about the metaphor of a boiling frog, where you put a frog in cold water and slowly as you heat it, the frog won’t be aware until it’s too late to do anything,” Didner said. “That happens historically. That’s how it happened in Germany. It didn’t happen overnight. It didn’t happen overnight in Italy, or in Spain, or really in any country. There’s a process to it.”