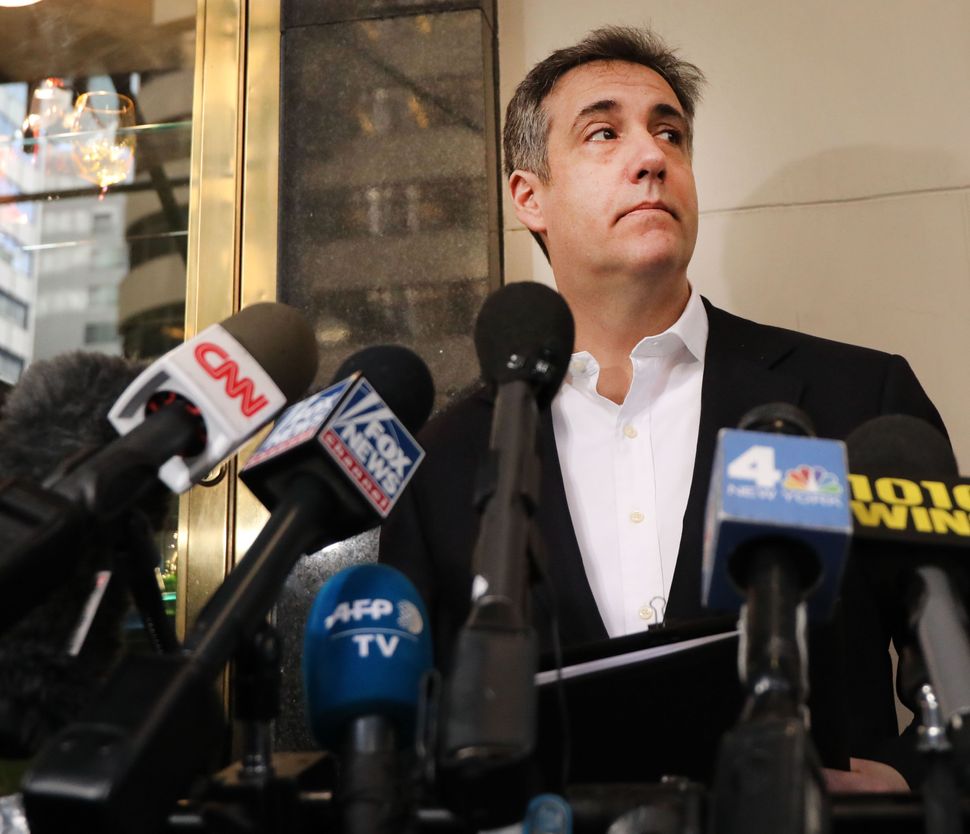 After years of following the every whim of Donald Trump, the man who served as consigliere and pit bull attorney to the president, then called him a racist before Congress, is prepared to say whatever you want him to — for the price of $100.

Yes, Michael Cohen has a Cameo.

For the uninitiated, Cameo is an app where celebrities from C- to Gentleman’s C-list record greetings for strangers, often from a script. Sometimes the Cameos are timed to special occasions like birthdays, graduations and anniversaries. Sometimes, they’re simply pep talks.

This depressing development is unsurprising. Cohen wrote a scathing and salacious tell-all book and testified under oath that he wouldn’t refuse any film deals for his story. He has never been one to shun the spotlight, or fail to monetize his curious notoriety.

Having previously gauged the Cameo market, let me say that $100 is a bargain: Jeremy Piven goes for $400, and Jordan Belfort for $795.

Honestly, for a guy whose rate for billable hours was probably quite steep back in the day, the current going price for Cohen’s time may offer a bleak window into his financial situation. Either that, or he’s very bored. (The $9.99 chat option — where he’d actually have a conversation with you instead of just film something — signals that he may also be very lonely.)

But if you do have $100 on hand for a personalized how-ya-do from Mr. Cohen, here are some ideas for things you might get him to say, or appropriate occasions upon which to solicit a recorded message.

1. “I’m warning you, tread very f—ing lightly, because what I’m going to do to you is going to be f—ing disgusting. You understand me?”

This quote, uttered to The Daily Beast in 2015 after they surfaced a particularly awful story about Ivana Trump and Donald Trump’s divorce, is a Cohen classic. For one single Benjamin, you may be able to hear just how much rage went into its delivery. I hope that you won’t have the need to use it for any occasion other than hearing his line read. But if you do…

2. Use him for low stakes intimidation

Want your kids to take out the garbage? Need your roommates to respect social distancing guidelines? Would you like your spouse or partner to stop putting the milk carton away with just a single drop left? Get Cohen to put the fear of God into them. You might be glad you did.

Before Cohen began his tough guy posturing as Trump’s lawyer, he made his money from taxi cab medallions. So why not give him space to play the most infamous tough guy taxi driver of all: Travis Bickle? This one is a particularly good choice, conducive as it is for a one-way video. No one’s talking to Cohen, but Cohen could be talking to you!

4. Get him to have a sitdown with intransigent relatives

If you want those in your life to consider voting for the Democratic ticket, perhaps you could use Cohen’s testimony to talk them away from Trump. After all, Cohen once worked for the Dukakis campaign, and, since his split with the current president, has had no issue calling Trump a racist and criminal all over town. If he can’t make the case, no one can.

5. “What is this? A center for ants?! How can we be expected to teach children to learn how to read… if they can’t even fit inside the building?”

Ben Stiller played Cohen on “Saturday Night Live.” Could it be a two-way street? Unlikely, but why not give Cohen a shot with one of Stiller’s most iconic lines. And while we’re talking acting…

6. If you’re a dramatist, have him read some sides

Given that Cohen is game for Cameo, he may be willing to lend his talents to your next film or play. Why not audition him for the role of a gruff father figure or striving, sycophantic lapdog lawyer?

7. Reach out on the eve of an indictment

If there’s one thing Cohen could talk you through, it’s trouble with the law. (Well, ok, he is disbarred, so his words of advice won’t technically count as legal counsel.) If, God forbid, someone in your life is facing a sentence for tax evasion or campaign finance violations, Cohen’s been there, and he might be able to offer a silver lining. Or not, maybe he’ll just scare them and call them stupid. Tough to say.