Finally, the perfect board game for Jewish boomers 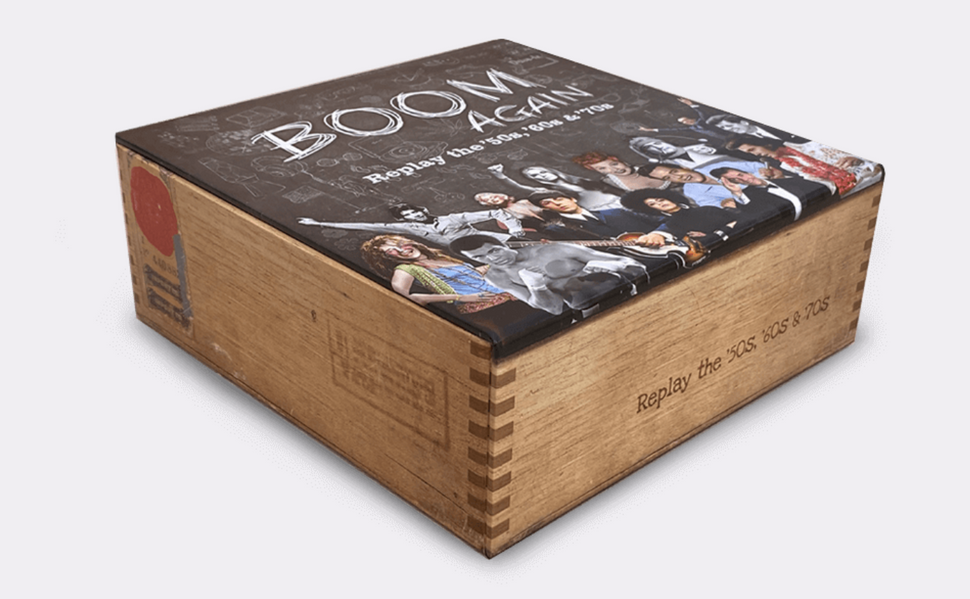 Finally, there’s something for those of us who qualify for Old People Shopping Hour and it isn’t about arthritis or urinary tract problems. It’s “Boom Again,” a board game designed for those 50 and up. If, like me, you miss pre-pandemic schmoozing, kibitzing and reminiscing, this is for you.

The game goes like this: Questions related to the 50’s, 60’s and 70’s are presented on cards that are broken down into categories – “Heard,” “Saw,” “Street,” “School,” “News” and “Shout.” Before I even started flipping through the questions, I was hooked by one rule: “The team with the oldest player goes first.”

A magnifier named “Boomer’s Little Helper” is included, which helps as the font on the cards could be bigger. It also comes in handy when you’re trying to get Chinese food delivered and having trouble reading the menu.

“Boom Again” feels Jewish-centric because so many of us were in show business during those decades. Though I was never enthusiastic about “Trivial Pursuit,” I’ve found it fun to re-live the years before I aged into being considered a trivial pursuit myself. The names in the game are ones that come up at every family dinner – Sandy Koufax, Jackie Mason, Julius and Ethel Rosenberg.

Sometimes, questions spur memories of personal experiences. “In ‘Annie Hall,’ waspy Diane Keaton takes her neurotic Jewish boyfriend home to meet her family. What does Granny Hall do when Woody shows up for dinner?” one question asks. The answer, of course is, “She serves him ham.”

That brought back one of my more embarrassing moments. In the lobby of a Broadway show during intermission, I found myself face to face with Diane Keaton. It would have been nothing more than a celebrity spotting had I not been dressed in an Annie Hall inspired dirndl skirt, shirt, tie and hat.

Card 370 — “Name the google-eyed actor who played Igor in Mel Brooks’ ‘Young Frankenstein,’” brought back the night I was leaving the Comedy Store in West Hollywood the same time as Marty Feldman. As we were walking to our cars together, someone rammed into mine and then took off. “I saw that,” Marty said.

“Of course, you did,” I teased the man who could have witnessed several accidents that happened simultaneously and in different locations.

One was Walter Matthau, which caused me to recall the time while I was working for Carl Reiner and suggested to his daughter — my friend, Annie — that she and I go to a screening he’d been invited to since her parents would be out of town. Upon arriving, we discovered it was a VIP event and we were the only non-celebrities. Afterwards there was a dinner at Chasen’s. Since there were few places left to sit, a couple asked if they could share our booth. As they sat, he said, “I’m Walter Matthau and this is Carol.”

I thought back to when I was mistaken for Barbra Streisand, mostly in the 70’s. Walking on Broadway, I noticed a man snap his head and recognized it was Elliott Gould. He immediately realized I wasn’t his ex-wife. The strangest time was when a man gave me a huge bear hug the Paramount Studio Commissary. “It’s so good to see you, Barbra,” he said.
“It may be that you don’t know her well enough to hug her,” I told him.

Card 305 — “I have a list of the three PRIMARY CHARACTERS ON TV’S ‘MAUDE,’ and the three ACTORS WHO PLAYED THEM. Name four of the six.”

Writing for ‘Maude’ allowed me to push a feminist agenda, but the anecdote I remembered was when Bill Macy, who played Maude’s husband Walter, had been making demands that annoyed the staff. They got him to stop by putting a fake title page on the next week’s script: “Walter’s Fatal Heart Attack.”

That question returned me to my single days, when Warren Beatty called many women I knew, but not me. At lunch, a friend said, “I have to return a call to Warren.” The other said she did also. They agreed to let me place the call. When he answered, I told him the names of the two women who were calling, asking which he’d like to speak to first.

With that familiar sexy, casual voice, he responded, “And who might you be?”

I didn’t need the game to think back to the series that gave me the courage to write a spec script and try to break into the male-dominated field of TV writing. The female characters had careers and the show’s producers were open to hiring women to write the scripts. Rhoda was the character I identified with; both of us felt like shleppers and made self-effacing jokes.

In the episode I wrote, I used a line I’d been planning to put on my invitations should I ever get married. After having one date with her boss, I had Rhoda fantasizing to Mary, “I can just see the wedding invitations. Mr. and Mrs. Martin Morgenstern are relieved to announce the marriage of their daughter Rhoda, to Mr. Douglas Hemple, who’s not good enough for her.”

Card 159 — “Betty Friedan was one of the original founders, and the first president, of what activist organization?”

We all know the answer to that one except maybe Amy Coney Barrett. This brought back the time the prominent feminist came to our house in LA for a Jewish study group. While the rest of us in the living room were listening attentively to the rabbi, she fell asleep.

That jogged fond memories of creating a primetime pilot for Shari with my husband, who was also my writing partner. Learning that our toddler son adored her, she offered to do a puppet show for him at her house. For 40 minutes, she entertained him with Lamb Chop and Charlie Horse. The puppeteer was highly paid for her performances, but our son felt cheated when she ended. “I want Hush Puppy,” he said.

Card 14 — “On ‘The Dick Van Dyke Show,’ Rob Petrie was the head writer for what egotistical TV star played by Carl Reiner?”

This card was the most meaningful. Carl Reiner was my mentor and transformed my life. He was nothing like Alan Brady. After being his secretary for five years, he gave me a writing assignment that launched my career. I have enough stories about him to fill hundreds of cards.

Ferklempt over politics and the pandemic, I’ve been desperately looking for distractions. Pelotons and puppies were suggested. Both require effort, and I knew I’d be sorry. When a Facebook ad directed me to boomagain.com, that seemed worth trying. We don’t know how long it will be before we return to normal physical contact and this is something we can do on zoom. I went through my buddy list to find those who, like me, were given our first “I voted” stickers when Carter faced off against Reagan. “Do you remember the name of the character Andy Kaufman played on ‘Taxi?’” I asked each. If they said, “Latka,” I urged them to get the game so we can play it online.

Finally, the perfect board game for Jewish boomers