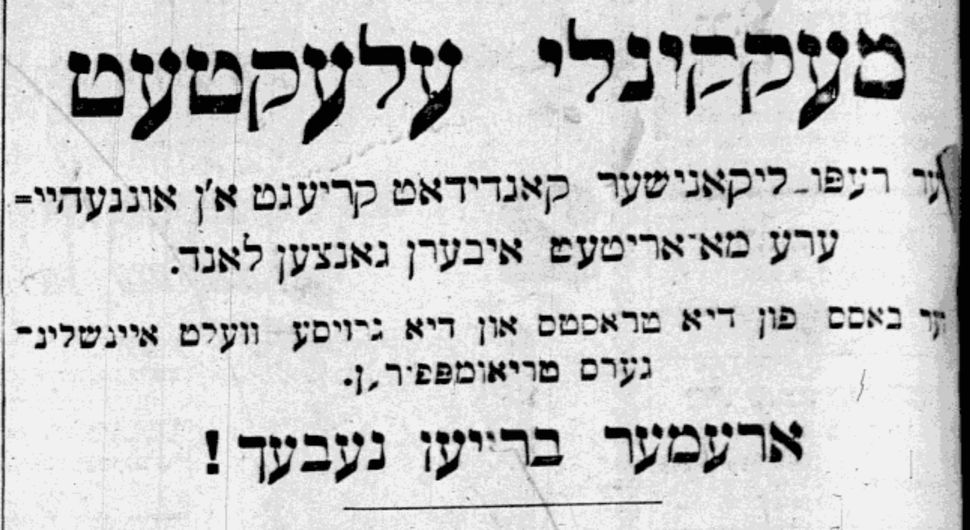 This is the sixth installment of a special series exploring the Forward’s election coverage throughout its 123-year history. Click here to sign up to receive it through our email newsletter, and find our earlier installments here.

On Oct. 13, 1897, six months after the Forward was founded, the fledgling paper issued its first major opinion on the American electoral process.

“In every civilized country, every people has an electoral system in a set format,” the column, penned by Shloyme Elizovitsh, tamely began. In two neat paragraphs, Elizovitsh laid out how elections are supposed to proceed, and why the democratic system ought, theoretically, to work.

Then he brought down the hammer.

“Capitalism dishonors its own ordered affairs,” he wrote. “The ‘free elections,’ a direction capitalism sought out and fought for in its young iteration, and into which it dragged the working classes and abandoned them there bloodied — for these same directives capitalism today created a farce, a comedy featuring a hole-filled mask behind which it hides while robbing political rights from the people and using them for its own thieving lust for gold.” 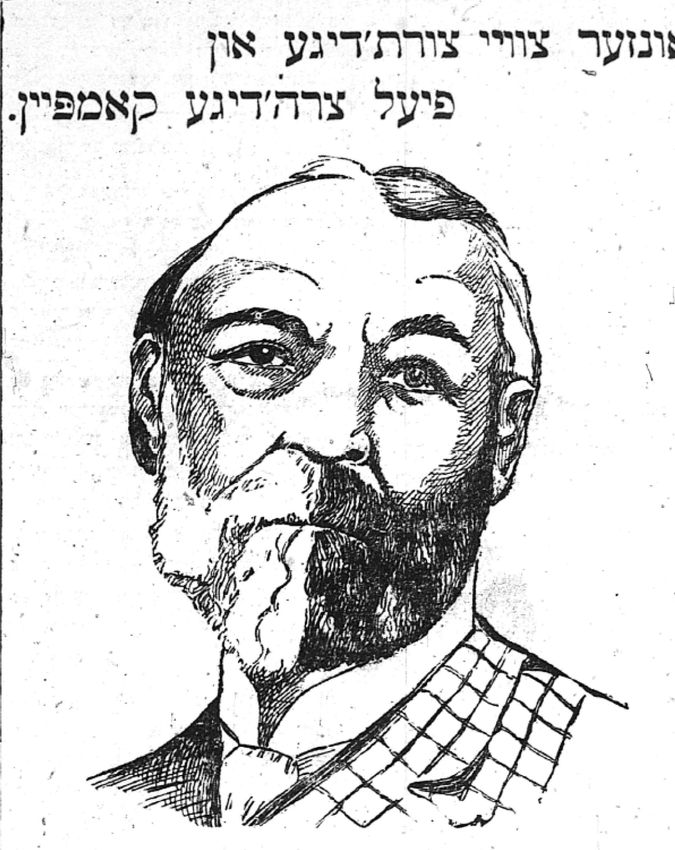 Elizovitsh spoke not just for himself, but also for the paper. On that year’s Election Day, Nov. 2, the Forward printed an image of the two major-party bosses in New York, the Republican Thomas C. Platt and the Democrat Richard Croker, as a single, Janus-faced man, calling the duo “our two afflictions.”

How could the two coexist?

For Elizovitsh, it was simple. Capitalism, he wrote, dupes the public with a string of attractive empty promises: “The people are trained to be fooled.” He found hope in the idea that the working classes would break free of that training, embrace their own power, and reform the political system to serve as a more honest tool for a broader swath of society. And he raged at the understanding that the system was designed to prevent such action, and that the road forward would be steep, unsure and likely full of misery.

Elizovitsh’s embodiment of those seemingly opposite but in fact complementary reactions to electoral politics persisted through the Forward’s early years. On Nov. 7, 1900, the day after President William McKinley was reelected, the Forward’s editors let loose: “Trust Bosses and Major World Pillagers Triumphant,” read a sub-headline, “THE POOR VENT: WOE.”

And in a column on the results, the paper took a furious stance on the merits of the president:

“McKinley, representing trusts and capitalism, generally. McKinley, who batters an innocent nation, the Philippines, for capitalists to have more markets for their capitalist wares and their slaves. McKinley, always on the ready for capitalism’s orders to shoot down workers like dogs when they demand a bit more bread for their troubles. McKinley, whose administration for the last four years was shot through with corruption, whose bloody hatred of the workers is again elected, and for another four years he and his gang will lead their bloody politics and rob the country.”

Looking back, the mode of hopefulness favored by Elizovitsh and his peers can appear bittersweet in its idealism. As cynical as they could be, they envisioned an American political system that was bound to someday accept their view as correct. “Workers, comrades, we’ve made a start,” the 1900 column said. “The capitalist frost has shattered and the warm, well-lit ideas of socialism are beginning to shine on the working masses.”

But that idealism was far from naive. The United States presented many Forward readers with their first opportunity to have a say in government. To make that franchise matter, new voters had to be both realistic about the system they were entering, and assured of their ability to change it. Idealism was a tool that could delude the masses, yes, but it could also compel them to use the little power allotted to them. The chances of success might be low, but it was better to lose than not to try. It was important, above all, to vote.

On Nov. 6, 1900 — Election Day — the Forward published a poem, titled “To the Voters” and marked with the oblique signature “S.Z.R.,” on its front page, under a banner headline encouraging readers to vote for Eugene V. Debs:

On election day,
From the booths,
sources
Of horrible double crossing and lies.

On the day cash
Is judge,
You can make out quite well.

To get your vote
They lie
Making your head gyrate

And you’ll be sure
Help will come faster
For yourself and for the masses.

It’s a message we’ll work to take with us into this Election Day: You can make out quite well, no matter how unchangeable the system may seem. Yes, let rage fuel you if you need. But let hope win the day.