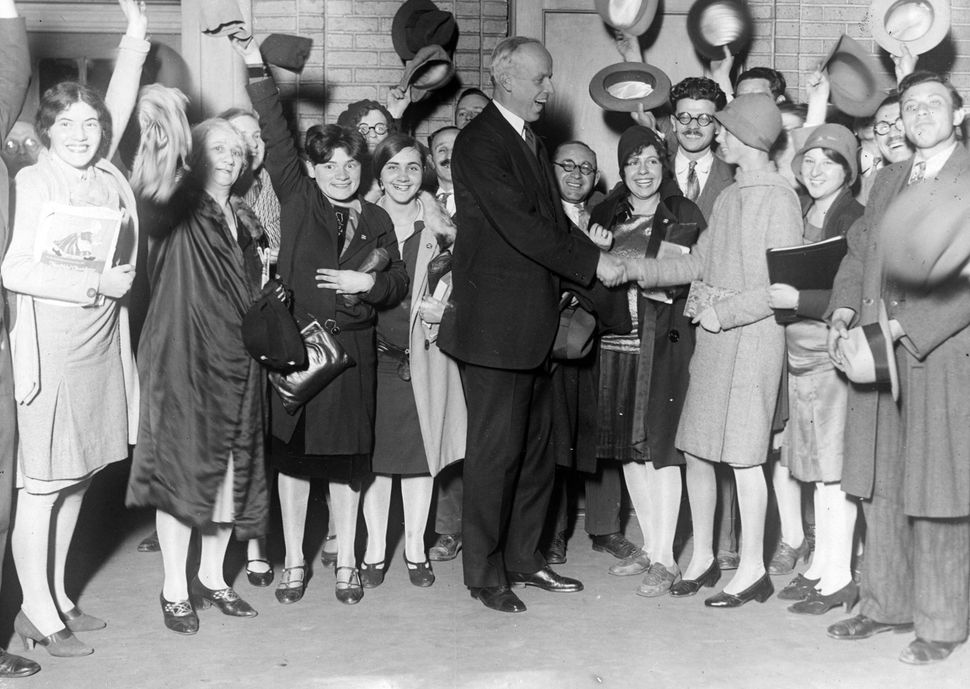 Editor’s note: This story was originally published in 2020 as the fifth installment of a special series exploring the Forward’s election coverage throughout its 123-year history. We’ve republished it for Presidents Day; find earlier installments of the newsletter here.

“Nothing in this campaign happened to change my mind about there being no difference between the Republican and Democratic parties,” Norman Thomas, the 1928 Socialist Party presidential nominee, wrote in a Forward column that appeared on Election Day that year, Nov. 6. 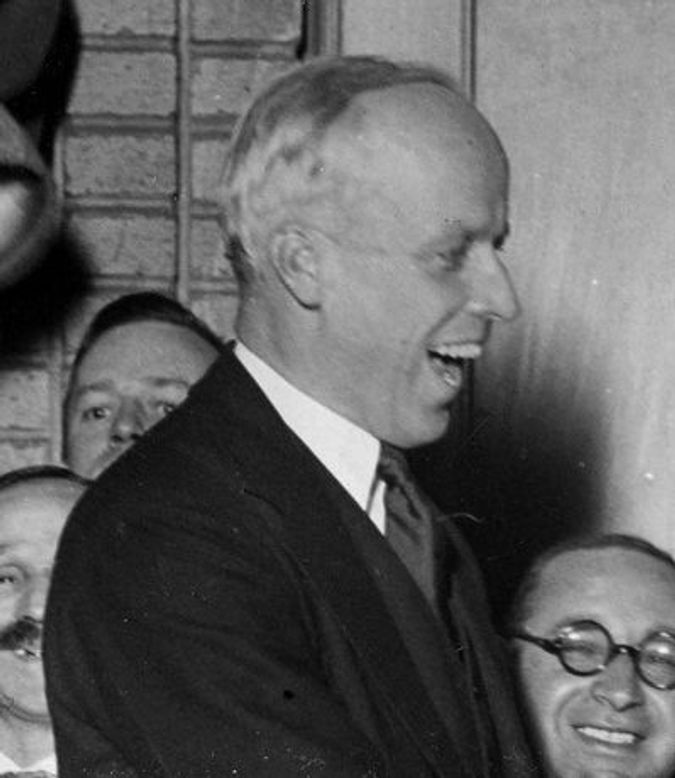 It was a statement completely in keeping with the politics of the Forward, which had, since its founding in 1897, consistently called for readers to vote the Socialist line.

But only eight years later, as Thomas sought the presidency for the third time, the Forward had shifted its stance on at least one of America’s two mainstream political parties. In a shocking move, our founding editor, Ab Cahan, endorsed the incumbent President Franklin Delano Roosevelt — a candidate whom he had described in 1932 as embodying the capitalist system against which the Forward was determinedly arrayed.

How could the Forward, which had built its reputation on its staunch Socialist politics, have gotten in bed with the Democrats?

The story begins with Eugene V. Debs, perhaps the most famous Socialist politician of the 20th century. 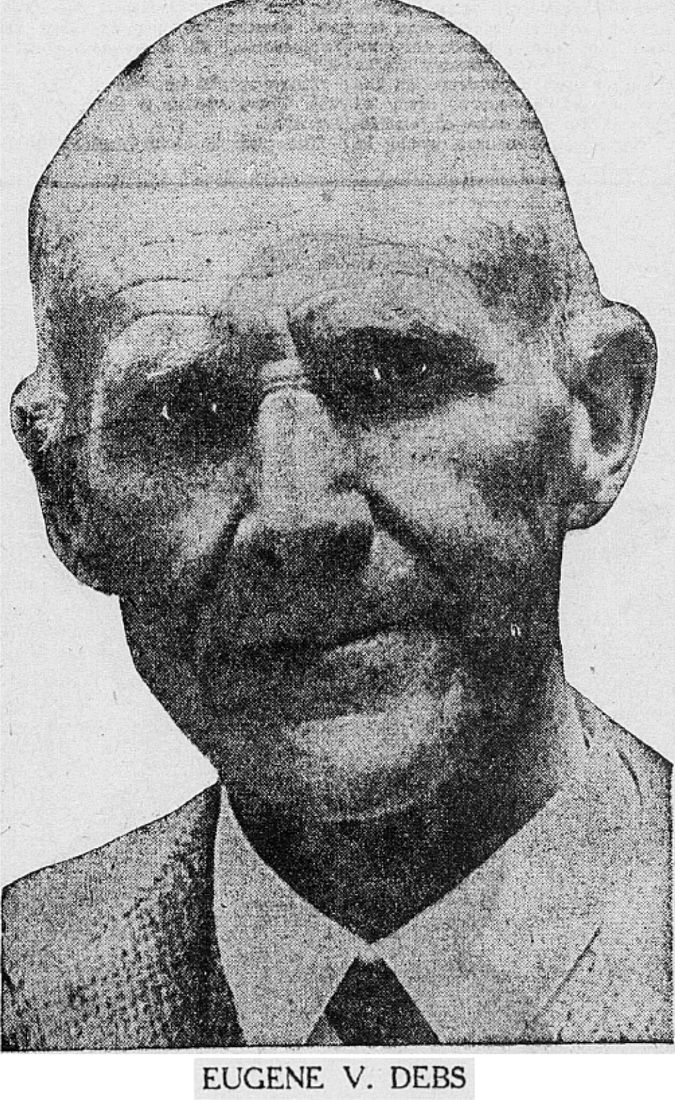 Debs first campaigned for the presidency in 1900, when President William McKinley, a Republican, ran for reelection against Williams Jennings Bryan, the Democrat he had beaten four years before. It was the first national election since the Forward’s founding, and Debs’ campaign was rich fodder for the young Socialist paper.

On Nov. 5, 1900, after circulars were distributed in Indiana falsely claiming that Debs was leaving the race, the Forward rushed to his defense. “Since the campaign began, the capitalist newspapers and politicians throughout the country have tried to swindle the citizenry,” a column about the incident noted.

But the Forward had a telegram from Debs himself standing firm against the falsehoods. “McKinley and Bryan will resign in favor of me, rather than I for them,” he wrote. “I stand in these fights until the bitter end.” (The Forward’s postscript to the telegram: “Politicians know Debs as a bone stuck in their throat… Tomorrow is the day their skin crawls.”)

Debs’ dedication to his cause reached an apex in 1920, when he ran for president from a prison in Atlanta, Georgia, where he was serving a 10-year sentence on charges of sedition. The Forward was as loyal as ever, reveling in his comparatively successful — but still losing — campaign.

“Debs’ vote… will explode like a bomb in the barracks of the capitalist classes,” crowed a column on election results. “The 3 million citizens who have given their votes for the socialist candidate who sits behind iron bars because he fought courageously for his ideas and for the right of his ideas to be freely expressed — that powerful voice will echo in the ears of the capitalist reaction that so arrogantly raged across the country over these last years and once and for all, rouse from slumber their sweet dream of having finally succeeded in choking and snuffing out the spirit of freedom and rebellion against their despotic rule.”

But by the time Thomas ran his first race, two years after Debs’ death in 1926, the political environment had slowly begun to change.

The Soviet Union, which the Forward initially believed might show the world the benefits of living under socialism — the paper was an early American publisher of Leon Trotsky — was veering increasingly into authoritarianism. The conflict between the upper classes and the organized-labor movement, the latter of which was a core passion of the Forward’s, was reaching a new apex after the 1927 execution of the Italian anarchists Sacco and Vanzetti. And while the economy was temporarily holding strong, seeds had been planted for the 1929 collapse that would instigate the Great Depression.

By the mid-1930s, a clear rift had opened between the Forward and the Socialist Party under Thomas. The Forward celebrated Roosevelt’s New Deal for its substantial investments in organized labor; Thomas lambasted it as shoring up a capitalist system that had, in the economic collapse, once and for all proved its fundamental insufficiency. The Forward had been raising alarms about the threat of Hitler for years, and pushing for aid to Europe’s Jews, Thomas was a committed anti-interventionist. And as the Forward’s editors saw far-right forces on the rise in the United States, they increasingly saw a mandate to prioritize the defense of liberty over ideological purity. 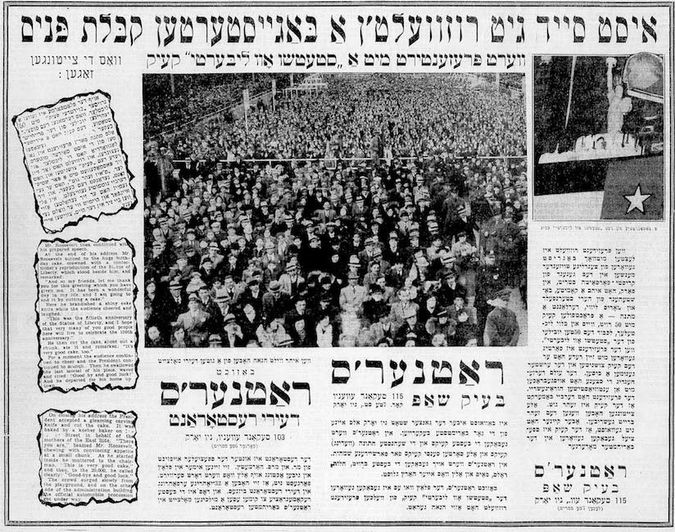 A 1936 ad for Ratner’s Bake Shop hinted at broad Jewish support for FDR: It chronicled the shop surprising Roosevelt with a cake in the shape of the Statue of Liberty. Image by Forward Archive

It must have pained Cahan to step away from the party affiliations he had spent decades urging American Jews to cultivate, but as his 1936 endorsement of Roosevelt made clear, there was no helping it.

“And so we must not neglect our duty.

“Each of us must today give their vote for Roosevelt and Lehman as candidates of the American Labor Party.

“No vote should be lost today. Each of us with the right to vote, must use their right and their duty and must vote today.

“The time has come when, with our vote, we can influence and decide which side will be victorious — the reactionary one or the progressive one, and in that decisive moment no one must permit their vote to be used simply as a means of protesting against the current capitalist system.”

It was a strident call, especially from a man who had, for decades, argued the opposite approach. But no matter what his emotions on the occasion were, Cahan was clearly certain that if his readers followed him in making such a sharp political turn, they’d be working for the public good.. “Our conscience,” he wrote, “will then be clear.”