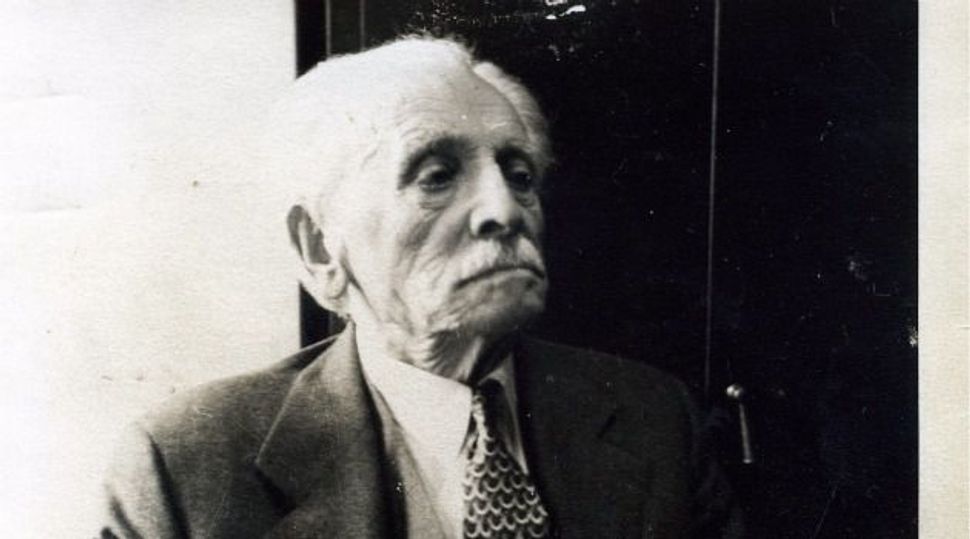 Founding Father: Abraham Cahan edited the Forward for fifty years, right up to his death in 1951. Image by Forward Association

A portrait of Abraham Cahan is the first thing that greets a visitor to the Forward in New York City. It attracted me from the moment that I, then a young newspaperman in my midthirties, first stopped by the paper’s editorial rooms. It was early in 1983. Published in Yiddish and known as the Forverts, or Jewish Daily Forward, it had recently retreated to weekly publication with an English-language supplement. I was there on a quest to bring out a new, full-scale national Jewish newspaper in English, one that would start as a weekly, eventually become a daily publication, and most important, bear the legendary Forward name.

This was seen by many at the time as an improbable venture, but I had become an admirer of Cahan years before, though even today I’m not exactly sure how this came about. I admired him as a newspaperman: in particular, as editor of the Yiddish-language daily that he had helped found one hundred years earlier and had built into one of the first national newspapers, with a circulation of more than a quarter of a million and editions in Los Angeles, Chicago, Boston, and Philadelphia as well as New York.

Cahan had edited the Forward for fifty years, right up to his death in 1951, and earned a place in the pantheon of America’s greatest newspaper editors.

Beyond that, I was also attracted by Cahan’s political story. He had stood with labor throughout its great awakening and the years during which it was being organized, but he had broken early with the hard-left factions and played a leading role in the long struggle against Communism. Although I myself was never a socialist or a member of a labor union, I had great sympathy for labor and its long march. 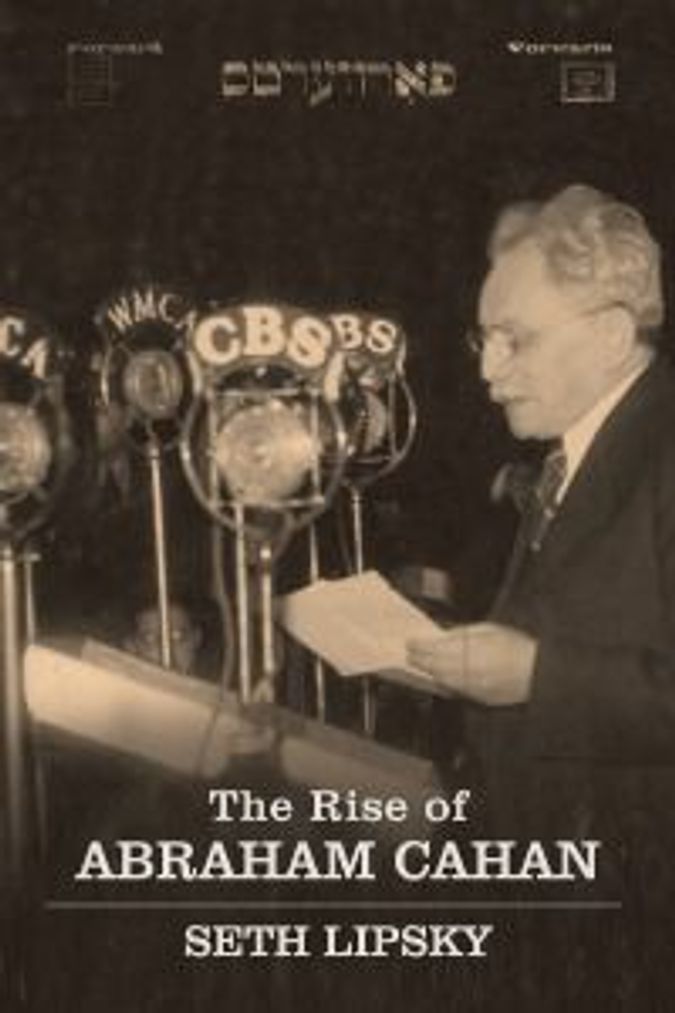 The author to whom I thrilled as a young student was John Dos Passos. Like him, I had moved to the right over the years, and as the Jewish story began to assert itself in the last quarter of the twentieth century, I perceived Cahan and what he built at the Forward as taking on, after a long decline, a new relevance. This was partly because of the way the denouement of the Cold War had vindicated the anti-Communist crusaders with whom Cahan had made common cause and partly because of the way Cahan had confounded a left that was emerging in league with enemies of Israel. I quickly discovered other matters on which the Forward had much to offer, from the debate over immigration to the use of quotas in the struggle for racial integration to the way New York City was governed to the problem of public education to the question of culture and its importance in the pages of a major newspaper.

This was put into sharp relief for me one day in the summer of 1984, when I was still at The Wall Street Journal and nursing the idea of an English-language Forward. My future wife and I went for Sunday brunch to the home of the editor of the Forward, Simon Weber, and his wife, Sylvia. Among the other guests were the Nobel laureate and Forward writer Isaac Bashevis Singer and his wife, Alma. As we were seated at a table piled with smoked fish and bagels, I mentioned that the Journal had just come out, at least in principle, for open immigration into the United States.

“Oy,” Singer said. “All those Mexicans.”

I protested vehemently, slapping the table and declaring that I was shocked to find myself hearing such sentiments at the home of the editor of the Forward and from its greatest writer — indeed, from America’s greatest immigrant writer.

Si Weber motioned me onto his balcony, which overlooked Brighton Beach, Brooklyn, where immigrant languages were spoken for miles in all directions. Then he shook his finger in my face and said, “I know you guys from The Wall Street Journal. All you want is cheap labor.” As I tried to explain to him that, in fact, the Journal was one of the few newspapers to agree with the labor unions that rising wages were not the source of inflation, I realized that editing the Forward could be more fun than anything I’d yet imagined.

When I arrived at the paper, Cahan had been dead for nearly forty years, but his presence was still very much felt. His name was bandied about in editorial meetings. His books were on our shelves, and editors reminded young writers of his penchant for plain language. The story was still told of how, when a subeditor would come to Cahan with a question about clarity, he would send the fellow out to consult the elevator operator.

On political matters, Cahan was cited both by readers who sent in letters to the editor and by older colleagues, men who worked in adjacent rooms on the Yiddish edition and wondered, as my colleagues and I did at the English-language paper, what the man whose portrait hung in the entryway would think about what was going on in the world today. Even members of the board of directors of the Forward Association cited Cahan as they wrestled with whether to continue to support the paper.

One morning, early in my tenure at the paper, I witnessed a curious thing. It occurred with the arrival at our offices of the newspaper’s storied general counsel, Judith Vladeck, one of the country’s leading labor lawyers. A grand figure of the old school, she swept out of the elevator. As she entered the premises, I startled to see her lift her hand to avoid looking at the portrait of Cahan. Later she explained that, like others connected with the paper’s traditions, she was not altogether an admirer of Cahan. Her own hero was B. Charney Vladeck, who happened to be her father-in-law and who, in the years between the First and Second World Wars, had served as the Forward’s business manager and whose politics were quite a bit to the left of Cahan’s.

As the years passed, I discovered that the Cahan whose views my critics so often accused me of traducing was a Cahan they didn’t agree with in the first place. After being accused of moving the paper too far to the right, I would seek guidance in the files from Cahan’s era, only to discover editorials on the evils of Communism that sounded as though they had been written by members of the John Birch Society. Questioned on our devotion to coverage of books and the arts, I discovered in the files a Cahan who was obsessed with literature and theater and what we call today the culture wars. When some wondered whether I had taken the Forward too far from the Jewish beat, I discovered in Cahan an editor who moved broadly in society, dining with the likes of H. L. Mencken and gallivanting about town with his friends from the Commercial Advertiser.

Yet the further Cahan ranged, the more obsessed he seemed to become with remaining loyal to a core sensibility from his youth: to the memory of his parents, to certain elements of the shtetl, and even, it turned out, to the idea of Jewishness itself and to at least some of the laws handed down at Sinai. He had begun his journey by marching away from religion in the name of socialism, only to mount his last big fight against those who would abandon the Jewish religion in the name of harmony and integration — even while insisting, to the end, that he was not a religious man at all.

Cahan had begun to doubt religion as a youth, though his parents were fervently pious and gave him a religious education. Caught up in the political awakening that took hold in Russia and eastern Europe in the second half of the nineteenth century, he abandoned religious orthodoxy and plunged into the revolutionary, anticzarist movement, while also being tempted by the freedom and materialism of secular liberalism. As pogroms ignited a historic exodus of Jews from eastern Europe, Cahan escaped to America one step ahead of the czarist police.

In America, Cahan taught school and fell in with socialist activists — one of whom, Anna Bronstein, he married. They had no children but remained married for more than sixty years, until her death in 1947. Cahan began writing not only for socialist journals but also for the general press and in 1897 became the founding editor of the Forward. Working primarily, although not exclusively, in Yiddish — a language that, it has been said, he “had come to despise” — he went on to become one of the greatest newspapermen of all time.

Cahan covered the stirrings of revolution in Russia, the ideological maneuvering over World War I, the accession of political Zionism, the emergence of the ideas of social democracy in Europe and America, the rise of the free trade union movement, World War II, and the Holocaust. In some of these events and movements, he played a leading role. Animated by his socialist, pro-labor politics, the newspaper he built laid the foundations for the institutions that brought down the Soviet Union and defeated its international Communist movement by driving through its heart the stake of free labor. Along the way, Cahan built a separate reputation as a towering writer of fiction; a behind-the-scenes player in local, national, and world politics; and a leader of the anti-Communist labor movement. He wrote a two-volume history of the United States — in Yiddish.

But the most remarkable fact of Abraham Cahan’s life was that, for all his worldly and political success, for all his freethinking and socialist idealism, he was never able to escape thinking of himself as a young yeshiva student from Vilna who prized, above all else, the wonder of Jewish life. In 1940, at age eighty, he excommunicated his star writer, Sholem Asch, for a flirtation with Jesus, going so far as to write a book denouncing him. He was capable of his own political surprises. On the eve of the Holocaust, Cahan mocked the only Jewish journalist of his own rank, Vladimir Jabotinsky, for his Zionist fervor — only to turn around weeks later, on Jabotinsky’s death, and write a prophetic elegy to his greatest political opponent.

Finally, Cahan’s life has much to teach us at a time when newspapers themselves are in a historic crisis, preoccupied with process and tactics and financial viability. For all his innovations as a newspaper builder, Cahan was one of those who understood the idea of the newspaper editor as a historical actor. He ranked with figures like William Lloyd Garrison and the greatest of the abolitionists, and Charles Dana, who worried less about his circulation than about the Union, and Theodor Herzl, who saw himself as not just covering a story but creating a state. Here, in Cahan, was a newspaperman who helped to reform his adopted country and open it to vast numbers of new citizens, while defeating its enemies at home and abroad.

From “The Rise of Abraham Cahan” by Seth Lipsky.

Copyright 2013 by Seth Lipsky. Published by arrangement with Schocken Books, an imprint of The Knopf Doubleday Publishing Group, a division of Random House LLC.