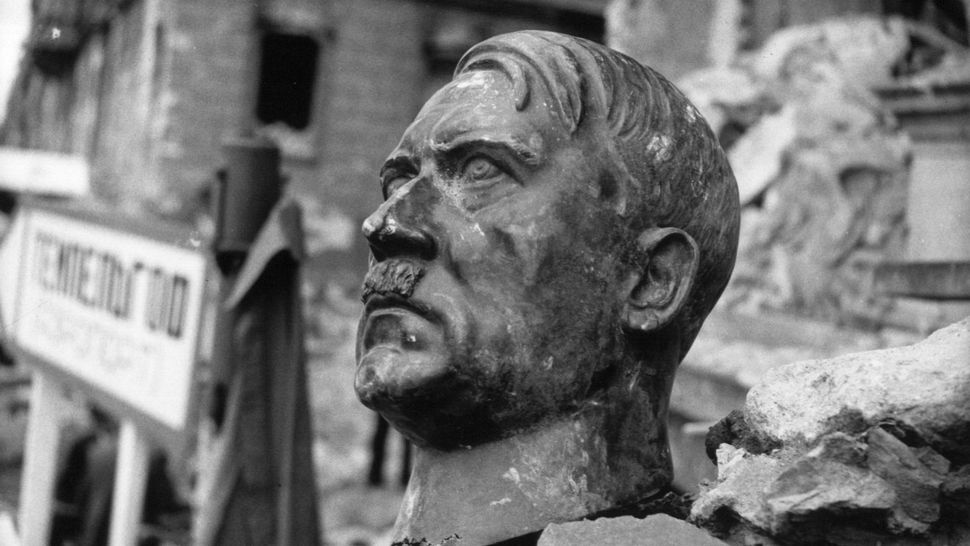 A bust of Adolf Hitler from “The Meaning of Hitler.” Image by Image © Reg Speller/Getty Images and Uwaga Film

Can any one film begin to answer the question of what, exactly, Hitler means?

That’s the goal of the new documentary “The Meaning of Hitler,” named for and based on the 1978 Sebastian Haffner book of the same name. From the outset, its ambition proves problematic: Directors Petra Epperlein and Michael Tucker chronicle various talking heads dissuading them from pursuing their lofty project.

UCLA historian Saul Friedländer tells them that the film’s intended exploration of Nazi iconography could be “redundant in many ways.” Yehudia Bauer, author of “Rethinking the Holocaust” offers that the film is unlikely to result in conclusive answers about Hitler’s motivations and success, arguing, “I don’t think anyone knows.” Psychiatrist Peter Theiss-Abendroth says every diagnosis in the DSM has been tossed at Hitler at one point or another. Even the film’s own narration questions the “wisdom” of making a documentary with so bold a title about so unknowable a subject.

I have never seen a film more intent on challenging its own need to exist.

And in fact, that challenge is warranted. The documentary doesn’t just fail, as expected, to produce a comprehensive profile of Hitler. It also fails to explain how Nazism and movements like it take hold, a more definite abdication of its mission.

Like Haffner before them, Epperlein and Tucker aim to “kill the legend” of Hitler. But unlike Haffner (the pseudonym of journalist Raimund Pretzel), who went into great detail on Hitler’s victories, failures and upbringing, they do not first establish the terms of Hitler’s legend, an omission that jeopardizes their entire endeavor. After expressing those early doubts about the task of intimately understanding Hitler, the film jumps between explorations of every Hitler-adjacent subject imaginable, from mid-century microphone technology to contemporary xenophobia and the 2017 Charlottesville rally. Without a solid background on the man and his ideas, the unifying message in those sidebars comes out garbled.

It’s not just that “The Meaning of Hitler” skirts essential context in its attempt at a holistic take on the dictator’s modern legacy. Structured as a series of travelogue detours, loosely connected by Hitler’s comings, goings and strange persistence in our cultural memory, it’s also cursory in its attempt at a complete picture. The film is too busy insisting on its own urgency to properly tackle any of the questions it raises.

In their searching, Epperlein and Tucker make pilgrimages to the bunker where Hitler ended his life and to Braunau, Austria, the place of his birth. The pair even take a day trip with Holocaust denier David Irving, of all people, to Treblinka. Their reason for including Irving, they explain, is that “You can’t make a film about Hitler without reaching out to his biggest admirer.” Yet the film appears too squeamish to actually engage with the specifics of Irving’s minimization of the Shoah. Instead, it lets others speak dismissively about how he blames Himmler (not Hitler) for killing Jews and permits him antisemitic hot mic moments, such as when he says, regarding Jews being forced to sift gravel with teaspoons, “Jews don’t like any kind of manual work. They just like writing receipts.”

How can we know what Hitler means if we don’t truly engage with those who still carry a torch for the man? The film seems happy enough to let us know such people exist and leave it at that, although it concludes Irving’s segment, which wraps with his admonition, “Forget about Auschwitz, it’s unimportant,” with text stating that 1.1 million people were murdered at the camps. It’s a remarkably naïve gesture, suggesting that the insidious effects of Holocaust denial can be persuasively countered by facts and figures — as if Holocaust deniers aren’t quite crafty at coming up with numbers of their own.

Irving is not the only apologist for fascism that the film features. Trying to divine Hitler’s current significance, Epperlein and Tucker go to Poland to document far-right demonstrations. But beyond capturing banners reminiscent of swastikas waving in the air, the filmmakers never make the protests’ connection to Hitler explicit, instead treating the Nazi ruler as a catch-all byword for rightwing nationalism, a move that fails to diagnose that ideology’s contemporary roots, or properly place the Nazi leader within his unique moment in history. (By the way, if you didn’t know Hitler invaded Poland, you certainly won’t learn it during the stop-off in Warsaw.)

There are complex concepts the film handles well, if a bit condescendingly, and late in the game. A third of the way through, novelist Martin Amis asks, rhetorically, “What is antisemitism?” In a smash cut, Holocaust scholar and Forward contributing columnist Deborah Lipstadt offers a simple, straightforward definition. But as useful as her appearance is, it’s strange that her remedial lesson would be buried in a film that presupposes so much other knowledge. Surely viewers who know the contours of Hitler’s career understand the basic facts about antisemitism.

Making the film’s choice to eschew the basic outline of Hitler’s life more troubling is the fact that the people who would likely benefit most from the film — and who might be expected to seek it out given its provocative, definitive-sounding title — need that initial primer most of all. Even as the film bemoans failures of historical understanding — one German tour guide criticizes an anti-Fascist monument in Hitler’s birthplace that makes no mention of Hitler — it denies its viewers the crucial context of the circumstances of the dictator’s rise and fall.

Watching it, I thought of DeSean Jackson, the NFL wide receiver who posted an apocryphal passage attributed to Hitler on social media over the summer, and whose boss, Eagles owner Jeffrey Lurie, produced the film. What would Jackson make of this flurry of unrelated, loosely linked ideas? Would the film give him a clear enough picture of Hitler to let him walk away understanding Nazi doctrine and race theory or the leader who plucked it from obscurity? To me, the answer is clearly no. So: Of what value is a Hitler documentary that only speaks to those who already understand the fundamentals of Hitler’s importance?

The answer: not much. Far from shattering or illuminating the Hitler myth, “The Meaning of Hitler” insulates him by supposing he means the same thing to most of us. He doesn’t — and that’s the problem.

“The Meaning of Hitler” is now playing as part of DOC NYC’s virtual festival.