The real ‘Queen’s Gambit’: Meet the first woman to qualify for the World Chess Championship 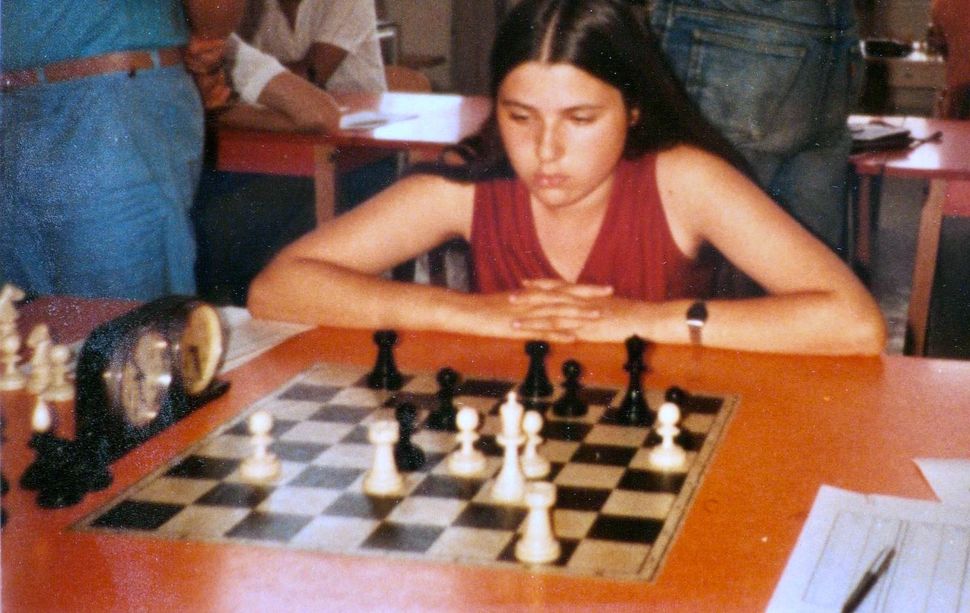 Susan Polgar, who became the top-ranked female chess player at age 15, assesses the state of play. Image by Courtesy of Susan Polgar

This article contains spoilers for “The Queen’s Gambit.”

When it comes to the real queen of chess — not the orphaned, sedative-addicted, fashionista variety now in vogue courtesy of Netflix’s “The Queen’s Gambit” — Susan Polgar is a model grandmaster.

Two decades after Beth Harmon took on the fictional Russian champion Vasily Borgov in Moscow, Polgar became the first woman to qualify for the Men’s Zonal World Chess Championship in 1986, when she was just 17. But the Hungarian-born Polgar’s ascent wasn’t nearly as easy or as cordial as the one depicted in miniseries.

“The sexism that she faced seems like it was a picnic compared to what I had to deal with in real life,” said Polgar, who, from the time she started competing as a toddler, perching on pillows to reach the board, had men and boys questioning her presence at tournaments.

When she was a teenager, a six-time U.S. Champion some 20 years her senior threw the chess pieces in her direction when he lost. Her life as a chess prodigy was rife with physical intimidation, emotional and mental abuse and, as she grew older, unwanted sexual advances. One constant of her career were the doubts, even from supporters, that a woman could ever compete with men on the highest level.

“I was stunned,” Polgar, 51, said from her home in St. Louis, Mo., where she coaches Webster University’s chess team. “Why? It’s not like a race where physical strength or speed would play the decisive role. This is just about thinking and about strategy and outsmarting your opponent. I promptly became determined to prove them wrong and actually used it as fuel to motivate myself to prove myself on the chess board.”

She did so by playing men — some decades older — when few other female players were doing so.

There was no Beth Harmon to pave the way for Polgar, who was barred by the Hungarian chess authorities from competing in the Men’s Championship on account of her gender and, quite possibly, because she is Jewish. Two women, the Soviet Union’s Nona Gaprindashvili and Maia Chiburdanidze, earned grandmaster titles by virtue of being women’s world champions, but their accomplishments weren’t on the level of Harmon’s obliteration of gender norms.

Polgar believes that the character of Harmon, first dreamed up for Walter Tevis’ 1983 novel, is a composite of Bobby Fischer, the eccentric American who beat the Soviet champion Boris Spassky, and Lisa Lane, the U.S. Women’s Champion who graced the cover of Sports Illustrated as part of a 1961 cover story.

“Lisa Lane never achieved anywhere near that kind of success, but she was glamorous and lived a, let’s say, active life like Beth Harmon did,” Polgar said. 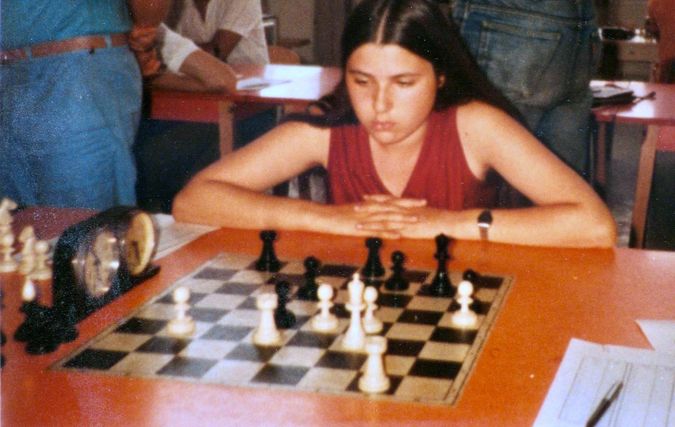 Susan Polgar, who became the top-ranked female chess player at age 15, assesses the state of play. Image by Courtesy of Susan Polgar

Polgar was born Zsuzsanna Polgár in Budapest in 1969. As a 4-year-old, she discovered chess, gravitating to it as if it were a piece of art or music, before she learned to appreciate it as a competitive sport.

Her father, László, a psychologist, used her interest in the game to test his hypothesis that genius could be taught, using chess as a core component of Susan and her younger sisters’ home school education. Polgar thinks her father proved his point in the question of nature versus nurture.

While László only ever played chess casually in high school — and his wife, Klara, learned how the pieces moved after Susan did — all three of their daughters went on to win gold medals in the Chess Olympiad, shattering the Soviet Union’s dominance in the sport in 1988 and again in 1990. Three years after their first Olympiad victory, Susan and her youngest sister, Judit, regarded as the greatest female chess player of all time, became the first female grandmasters awarded the title under the standards set for men. (The middle Polgar sister, Sofia, is an international master.) Susan’s accomplishments cleared the way for her and her sisters, forcing The Men’s World Championship to drop the “Men’s” from its official title and begin admitting women.

Unlike Harmon, Polgar is quick to point out, she did all this by staying disciplined and sober.

“When I was watching as a female chess player, I was rooting for her to win of course as well as rooting for her to kick her addictions,” Polgar said, telling me how she never smoked, drank or used drugs and even avoided over-the-counter medication so that she could keep her mind sharp. “People who live a different lifestyle, I don’t think those other ones can really succeed actually.” 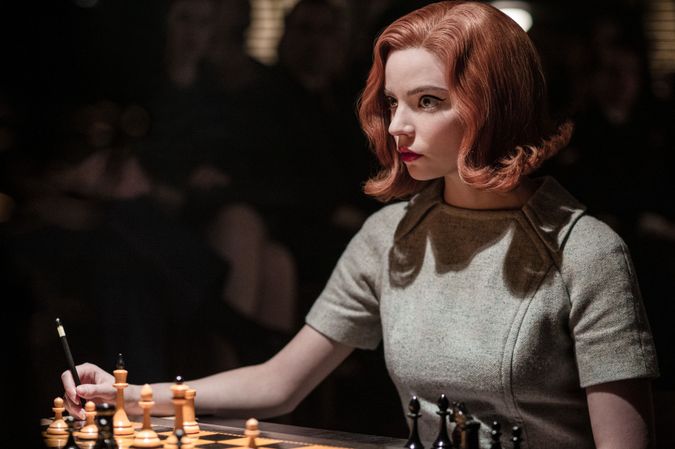 Anya Taylor-Joy as Beth Harmon in “The Queen’s Gambit.” Image by PHIL BRAY/NETFLIX © 2020

Setting aside the notable dramatic license of substance abuse, Polgar says she was impressed with the show’s depiction of the chess community. While she mostly played in dreary gyms and boring ballrooms — not the luxe hotel hallways of Harmon’s early international victories — Polgar applauded the series’ depiction of the rigors of practice, economically-considered travel coordinations, obsessive characters, and, courtesy of chess consultants Bruce Pandolfini and former World Champion Garry Kasparov, accurate gameplay.

“The screen obviously has limitations,” Polgar said, “you can’t wait for them to think for five minutes in pure silence, which it normally would be, the same way that in a normal chess tournament that the two opponents would have a conversation and discuss various things — in fact it’s not even allowed by the rules to talk during the game.”

Series creators Scott and Alan Frank found a way — using spectral chess pieces that appear on the ceiling and a compelling performance by Anya Taylor-Joy in the role of Harmon — to visualize the game’s excitement, a feature that Polgar says has been quite hard for most filmmakers to dramatize. She believes the show’s success will be the sport’s, ratcheting up chess fever to a level not seen since the days when Fischer battled Spassky in 1972. (“Chess” the musical was fun, she says, and she loves the music, but it didn’t quite command this much attention.)

While “The Queen’s Gambit” gets a lot right, it’s hard to gauge just how different the world of chess would be if an icon like Harmon bested the Soviets at their own game at the tail end of the ‘60s. Such a coup would likely have galvanized girls and young women to take up the sport, particularly in America, leading to greater equality in the game. Polgar, who moved to the U.S. in the 1990s, lived through a different reality.

In her late career, Polgar had to contend with red tape from the International Chess Federation. In 1999 she sought a six-month extension of a match scheduled for the month after the due date of her first child. The Federation denied her request and, when she refused to play the matches in China, an illegal home-court advantage for her Chinese rival, her title was taken away. She sued and won damages, but not her grandmaster status. She retired from competition, but developed a new calling.

In 2002, the executive director of the U.S. Chess Federation met with Polgar and presented her with some troubling statistics. Of the Federation’s then nearly 100,000 person membership, less than 1 percent were women. So Polgar established the Susan Polgar Foundation, a nonprofit hosting girls’ and unisex tournaments and promoting chess education. A decade later, the Federation’s female membership was 14 percent.

“We’re still a minority in the chess community, but that’s a huge improvement,” Polgar said. “While I was the first woman to break the gender barrier and be a grandmaster based on the regular requirements, today there are a few dozen other women that have followed suit. We’re making great progress.”

Polgar continues to break barriers, and while she sees an encouraging normalization of women in the sport, and less abuse from male competitors as the gender gap narrows, she says she continues to face hostility as a female coach. 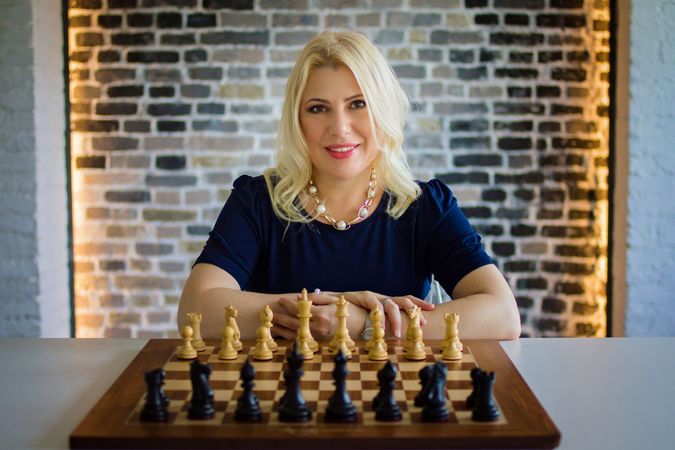 Polgar at the board in a recent picture. Image by Courtesy of Susan Polgar

In 2007, she brought the Susan Polgar Institute for Chess Excellence (SPICE) to Texas Tech University, leading the top-ranked men’s collegiate team in the country and becoming the first woman to coach a Men’s Division 1 team to a national championship. Though she continued her record of success after moving with members of her team to Webster University, where her players spent an additional seven years on the top, she says she has not yet earned the civility of male colleagues.

“Still some male coaches and program directors refuse to shake my hand and congratulate me when we win,” Polgar said. “My teams have won more than all other university teams combined. And yet they still have a hard time recognizing a woman winning.”

This treatment, while upsetting, is nothing new for her. Having faced derision as a girl, a Jew, a young person and, now, a top-ranked woman coach, has motivated Polgar to perform at her best — even if no wizened Russian grandmaster ever held her hand aloft as a victor.

“I was very fortunate that my parents believed that the best answer for everything was results. The results will speak for themselves, and to a large degree they were right in that,” Polgar said. “They can try to push me down, they can try to silence me, but at the end of the day if I’m a perseverant enough, if I’m patient enough, if I work hard and the results come, at the end of the day the results speak louder than anything else.”

The real ‘Queen’s Gambit’: Meet the first woman to qualify for the World Chess Championship