Looking for the truth in Gaza — through a camera lens 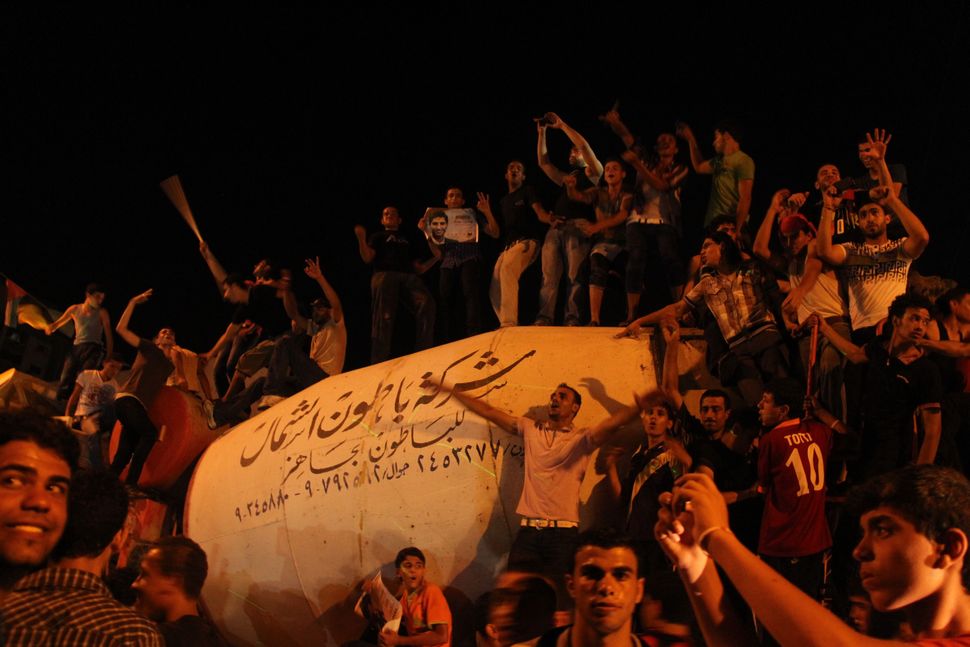 June 22, 2013: A crowd in Gaza City celebrates the victory of Palestinian singer Mohammed Assaf in the “Arab Idol” contest. Shortly after Saftawi took this picture, security police confiscated his camera and he was interrogated by uniformed officers. Image by Jehad al-Saftawi

Jehad al-Saftawi grew up in Gaza.

The field in front of his boyhood home was used to launch rockets into Israel. As he approached manhood, he witnessed Israel rain down rockets of its own, leveling apartment blocks. To get the full picture of where he comes from, Saftawi insists on making both of these truths public.

Saftawi’s father, Imad al-Saftawi, is a jihadi, responsible for the deaths of Israeli civilians. He now works as a brigadier general for Hamas after having served 18 years in an Israeli prison. Saftawi was 9 when his father was arrested, but Imad remained a presence in his life, calling from jail with threats and strict religious instruction for Jehad and his siblings.

“The vast majority of my life I thought that is what normal is,” Saftawi, a photojournalist and the author of the new book “My Gaza: A City in Photographs” said over the phone from the San Francisco Bay Area, where he and his wife, photojournalist Lara Aburamadan, are seeking asylum. “We as Palestinians, in life, just have conflict and we’re being raised to rise for our cause and people. It was all part of the narrative that life is that struggle. Our ancestors, our grandfathers, have paid their price and it’s our duty to continue this.” 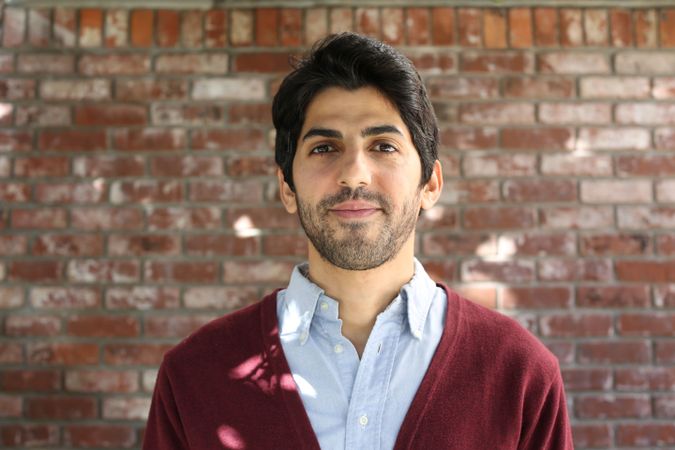 Saftawi was brought up to believe he had a role to play in the ongoing conflict. In his community, his father was regarded as a hero. At home, where quotes of the Prophet Muhammad lined the walls, relatives enshrined the struggle as a rite of passage. At school, the discipline took on a military character.

He was a teenager in 2006, when Gazans elected the radical Hamas government. A number of his high school teachers were members of Qassam, the Hamas military wing, who would guard ribāṭ, small fortifications, along border areas in the morning before classes started. When they arrived, Saftawi says, they would often beat students and pour sand on their heads if they didn’t have the right kind of haircut.

As the full extent of Hamas’ extremism revealed itself, Saftawi began taking photographs with his phone. He started in 2008, a few months before Operation Cast Lead, an IDF campaign to destroy Hamas’ rocket capabilities that ended with over a thousand Gazan fatalities, many of them civilians. He would go on to chronicle life on the ground, and, in the case of his trek through secret tunnels running from Gaza to Egypt, beneath it, capturing poverty, protests and the territory’s chronic gas shortages.

In 2014, Saftawi gained international attention for livestreaming the air assault during Operation Protective Edge from his apartment window. The reason why he took this approach was simple: He couldn’t leave the building for most of the offensive. Even so, his book is dense with scenes of the operation’s carnage and men and women fleeing their soon-to-be-shelled homes with mattresses and bedding. 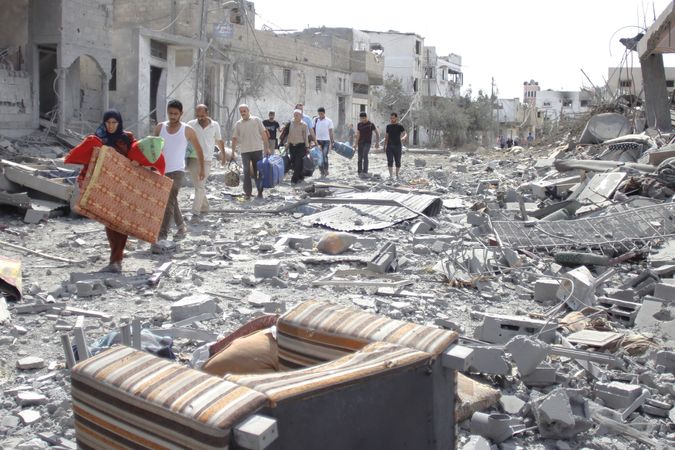 July 26, 2014: Gazans from the Shuja’iyaa neighborhood carry what they can from their destroyed homes during Operation Protective Edge. Tens of thousands in the neighborhood became homeless during the operation; hundreds were wounded and over 60 were found dead between July 26 and 28. Image by Courtesy of McSweeney's, Jehad al-Saftawi

“After the 2014 operation and the amount of misery I saw — being committed not only by Israelis but also at the hand of Palestinians to other Palestinians — that just made everything clear,” Saftawi said. “We are just another place with tyrants who are deciding for the majority of the population how their life’s going to be.”

Saftawi decided to question the narrative he’d been fed his whole life. He believes Israel, whatever the provocation, reacts disproportionately to Hamas aggression, causing unnecessary casualties in Gaza while maintaining a blockade. At the same time, he claims Hamas is escalating the rules of engagement and endangering Gazan lives by placing them in harm’s way and inculcating the youth to live for the hereafter — and not for their own future.

While the subject of Saftawi’s book is the tragedy of Gazan people’s conditions, it is, fundamentally, an attempt to capture the truth of his small part of the world, including the efforts to suppress that truth. 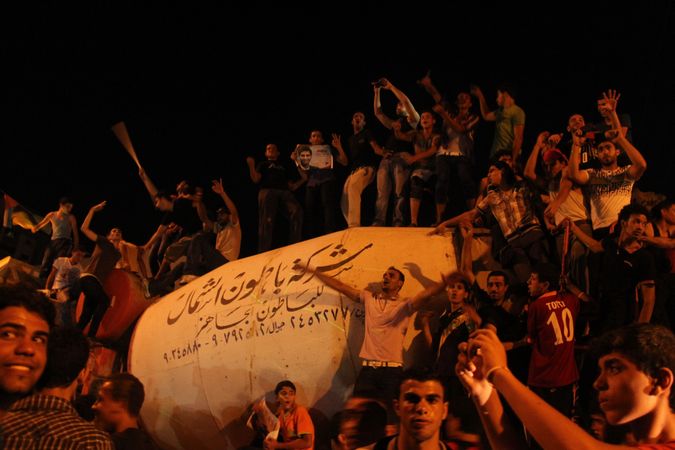 June 22, 2013: A crowd in Gaza City celebrates the victory of Palestinian singer Mohammed Assaf in the “Arab Idol” contest. Shortly after Saftawi took this picture, security police confiscated his camera and he was interrogated by uniformed officers. Image by Jehad al-Saftawi

The cover image, of Gazans celebrating Palestinian Mohammed Assaff’s victory in the “Arab Idol” singing competition in 2013, was taken just before uniformed and secret police confiscated Saftawi’s camera and looked through his pictures. Qassam interrogated him on multiple occasions. He says his experience is far from unique.

“All the stringer reporters for AP, for New York Times — not the international ones, the Palestinian ones, who are living in Gaza — the subjects they are tackling, they are self-censoring,” Saftawi said. “They can’t really talk about things as they should, like media. What’s the role of media? It’s to question and navigate the truth and try to tackle the issues that concern the people, and this is definitely not happening.”

These factors — and the scrutiny placed on Saftawi and his wife’s life by his family — became too much. In 2016, with the help of the New York-based nonprofit, the Institute for Middle East Understanding, they came to America and, in early 2017, began the asylum-seeking process. 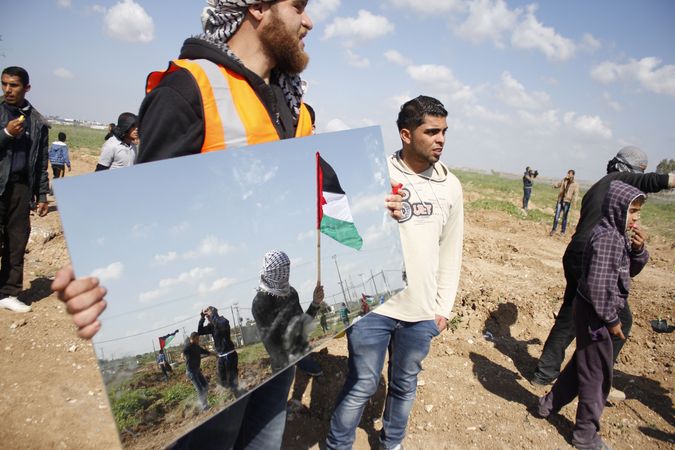 February 25, 2014: Palestinian protesters on the Eastern border with Israel. Many held mirrors to reflect Israeli soldiers as they opened fire and to reflect sunlight to confuse their vision. Image by Jehad al-Saftawi

Free from Gaza’s hurdles to independent journalism, at last able to speak his mind, he waited for the Institute to ask him about his family story or discuss best practices for covering the conflict. He says they never did. He would attend their ritzy parties and speak at their events, but claims they were ultimately uninterested in his experience; they wanted to review his talking points in advance. To his frustration, they too had their own narrative in mind.

“The organization I was working for had that nature of not necessarily telling you what’s going on in Gaza,” Saftawi said, “it’s just pushing back Israeli Hasbara. It wasn’t ‘what do we really need to tell?’ and ‘are we serving the helpless people in Gaza?’ It was more, I would say, a propaganda body.”

Saftawi moved to California and took jobs at restaurants as he tried to learn more about the U.S. and how to help other asylum-seekers. His wife continued her photography. He says he’s since stopped his own.

7,000 miles away from his major subject, he has found other outlets for telling his story: op-eds and a vocal Twitter presence. Recently he’s asked followers to consider why “monarchic dictatorships are in favor of President Donald Trump, and in contrast, rebel and terrorist organizations are in favor of candidate Joe Biden.” He has retweeted Bari Weiss. He has celebrated the Abraham Accords and Israel’s normalization agreement with Sudan.

Once upon a time the Sudanes regime had allowed my father to undermine Israel’s security, using its soil. Congratulations to Sudan for opening up a new chapter for their country, and for the interests of their people. https://t.co/XW0oBPvg1t

Explaining his support, Saftawi tells me a story about a time in 2012, during Operation Pillar of Defense, when he and his cousin went to buy bread.

“After we toured the street we saw a group of Hamas militants dragging the body of someone they claimed to be a spy and when I started filming with my phone, one of the militants put a gun to my head and told me to stop filming,” Saftawi said.

Later on, they learned these men became famous throughout Gaza for parading with the man’s dead body through different neighborhoods. In this extreme context, the Abraham Accords are a welcome sign of deescalation.

“Whatever is going to change in the Arab mentality is going to impact Gazans and the culture, and the way they perceive conflict,” Saftawi said.

Saftawi thinks a culture of peace, furnished by the Accords, will “bring Palestinians from that far-radical thinking to a more realistic one of coexistence” by signaling what Arab expectations now have for Palestinians.

He concedes that such a view will not be popular with everyone, and he believes the Abraham Accords have been derided particularly because they emerged from the Trump administration. 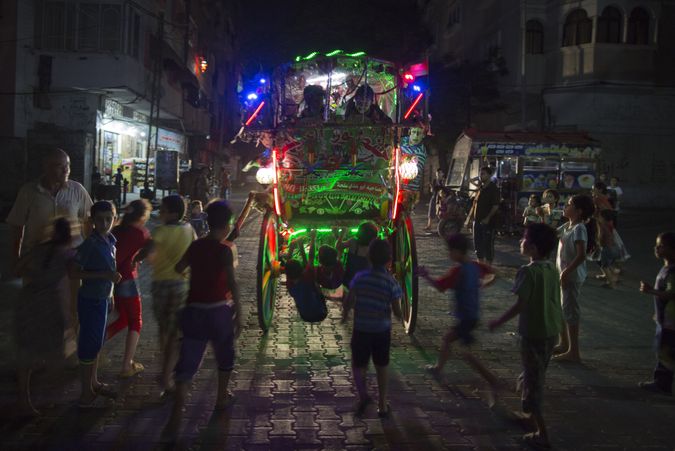 While his opinions are layered, rejecting moral absolutes or easy answers, he offered what looked to be a succinct expression of his philosophy on Twitter.

“Truth is our only hope, and best defense,” Saftawi tweeted, in quotation marks.

I couldn’t find a source for the quote. Saftawi says he’s embarrassed to admit it came from a segment on Tucker Carlson’s show on Fox. He’s not a fan by any means, but found it powerful nonetheless.

Looking for the truth in Gaza — through a camera lens