I was an outsider at Christmas — until I found ‘The Nutcracker’ 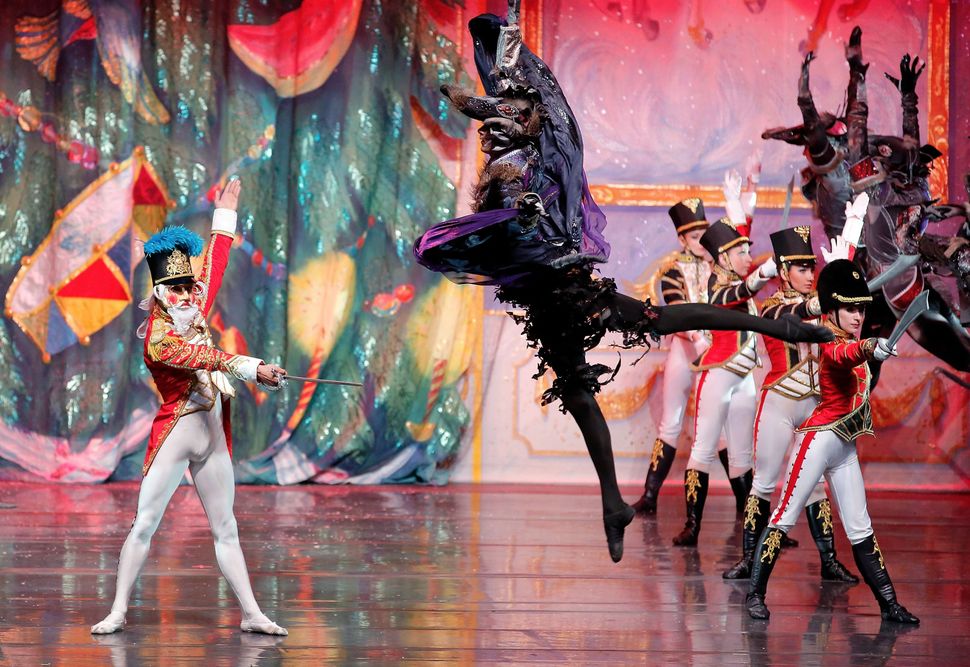 Members of the Moscow Ballet perform the “The Party Scene” on stage during the Moscow Ballet’s Great Russian Nutcracker at the Hammerstein Ballroom on November 30, 2013. By Jemal Countess/Getty Images

Until I discovered “The Nutcracker,” December was the season of fruitlessly trying to explain Hanukkah to my mostly non-Jewish friends. I never wished to be anything but Jewish, but I secretly longed to experience the kind of Christmas cheer I read about in books. I wanted a big family gathering, with a tree and mistletoe and everyone in their best outfits, and the sense of being part of some great joyful event happening to the whole country at once.

I didn’t want to feel like an outsider at the most magical time of the year. “The Nutcracker” granted that wish.

Perhaps the happiest experience of my childhood was dancing in the Colorado Ballet’s 2001 and 2002 productions of the 1892 classic. I was a Sugarplum Attendant, with a scant two minutes of stage time — enough, it turns out, to yield a lifetime of fond feeling. 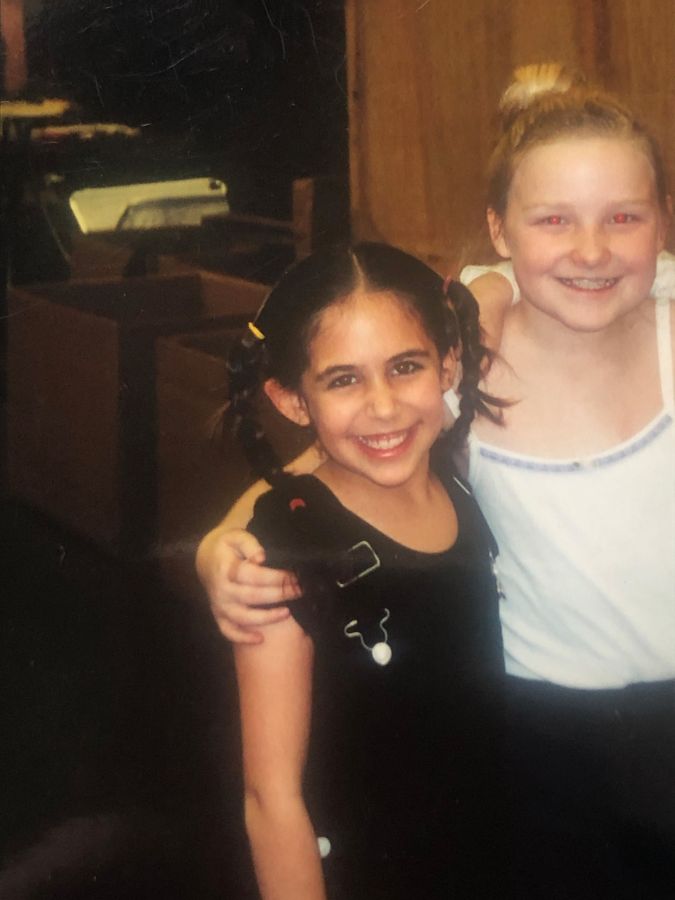 Backstage at The Colorado Ballet’s “The Nutcracker.” Courtesy of Talya Zax

“The Nutcracker,” you see, was not just an enormous tree and happy pranks and gorgeous clothes, but wonder in spades. And with its odd melange of influences — the Land of Sweets includes chocolate from Spain, coffee from Arabia, tea from China, candy-canes from Russia — it made space for me, a small Jewish girl, in all the Christmas hoopla.

But alas, the coronavirus pandemic means that “The Nutcracker” is, like most rituals of public life, a no go. This year we’ve lost much more than the pleasure of sitting in a theater and watching a child wage war with terrifying human-sized mice. Even so, “The Nutcracker” is an integral, effectively religion-free aspect of the holiday season — like mall Santas and tepid Hallmark romances — and the loss of its live performance stings.

(Many companies have found creative ways to make “The Nutcracker” pandemic-palatable, including broadcasts of past performances and socially distanced shows meant to be watched through windows, but it is simply not the same.)

In its all its forms, with all its oddities and despite its questionable aspects — mostly, the yellowface — “The Nutcracker” is one of those experiences of joy that were rare enough before the pandemic, and have all but disappeared during it. Magic may not be anywhere near the top of the list of things we as a society need right now, but its absence makes our current dark days just a little darker.

So it’s no surprise that I’ve been spending my mornings before work, and my evenings afterward, sitting on my couch in front of my roommate’s unstable plastic Christmas tree and thinking about “The Nutcracker.”

As my parents tell it, they took me to see “The Nutcracker” for the first time when I was 3, and I was transfixed. They enrolled me in ballet classes soon after, and I took it very seriously. If you ever visit my childhood home in Denver, you will find in my father’s office a full-length portrait of me at my first ballet recital, all of 4, decked out in a pink lace tutu and Mardi Gras beads, my hair pulled back in a hilariously severe bun, looking about as solemn as a professional dancer about to perform for the queen.

I studied at the Colorado Ballet Academy, the school attached to the state’s biggest professional ballet company, and promptly began an impatient wait to be old enough to audition for “The Nutcracker.” I remember those long Saturdays spent learning choreography in one of the cramped building’s airier studios. There, with the scent of rosin on the air and the Russian ballet-mistresses examining us sternly from the front of the room, I felt like the luckiest girl on Earth.

For the two precious seasons when I appeared in the Colorado Ballet’s annual production, at ages 8 and 9, Christmastime stopped being an occasion for me, as a Jewish child, to feel like an outsider yearning to be let in on the joy.

Instead, it became a time when I helped produce that joy, an experience a million times grander than that of being one of its recipients.

I loved everything about being in “The Nutcracker”: the grown-up feeling of putting on my little-girl makeup; the in-on-the-secret pleasure of watching the professional ballerinas run through their steps in sweatpants and legwarmers; the lofty pride of seeing other young girls arrive to see the show, and thinking of how they must envy me.

I befriended one of the older girls in the corps de ballet — I never knew her real name, but I called her the Friendly Fairy — and every night before I went on, she would race over and give me a hug. Backstage, the other kids and I would practice the corps’ moves, dreaming of the day when we, too, would put on pointe shoes and perform the “Waltz of the Flowers.”

For Hanukkah, my parents bought me a red fleece cape with black velvet buttons and matching gloves, which I wore to the theater for every performance. It was my uniform, my signal to myself and the outside world that I was part of the ambient cheer — essential to it, not excluded.

There is a world of memory in those days. When I think of them, I see specific, ordinary moments with an unusual clarity. I can’t tell you the names of most of my second-grade friends, but can tell you in detail about the time I saw the young woman playing Clara break down in tears before the show, or the setup of the mirrors in front of the hairdresser who wove gold ribbons into my braids before each performance. I felt such a great belonging there.

And then, painfully, it ended.

Just as I was supposed to move into pointe shoes, a new ballet teacher arrived. I was a physical oddball in my class, much shorter than the others, with a child’s version of the wide hips that had characterized women in my family since the shtetl. Previous teachers had played to my strengths, but this new one told me every day, in front of my peers, that I was the wrong shape and would never make it.

After two weeks, I had the good sense to quit. Ballet is not an arena in which you can complain about such comments and expect them to stop. I was only 10, but I knew that years of that treatment would damage me for life. So I said goodbye to the dream of pointe shoes, promised my friends I’d stay in touch, and folded up the red cape.

In my child’s way, my heart was broken.

But soon after I quit, I fell in love anew, with “Pink Slippers, Bat Mitzvah Blues,” Ferida Wolff’s novel about a dedicated young ballerina torn between preparing for her Bat Mitzvah, helping care for her sick best friend and preparing to dance a central role in “The Nutcracker.” My first year of high school, I adapted a selection from the book to perform as a dramatic monologue.

It tended to leave the audience cold; I wasn’t made for speech competitions in the same way I was made for ballet. But it moved me nearly to tears every time. When that ballet teacher had criticized my body, I felt, implicitly, that I was being called too “other” — too Jewish. The story of a girl feeling the same tensions, albeit for different reasons, was my own.

Those memories still pain me. But with time, the idea of “The Nutcracker” began to be magic again, an opportunity to celebrate an old version of myself rather than to mourn her losses.

Eight years after I quit ballet, during my sophomore year of college, I asked my parents to go with me to see “The Nutcracker.” An old friend of mine was dancing in the corps, and the minute she stepped onstage, I began to sob. But they were happy tears.

Looking at her, and remembering how we used to carefully mime that very choreography, I felt the particular charm of the ballet reach out for me, and I was in it again. No matter how short and hippy and Jewish I was, “The Nutcracker,” in its own way, still had space for me.

So during this most painful and alienating of holiday seasons, come 9 p.m. on Thursday, I’ll be streaming an old Colorado Ballet performance of “The Nutcracker” via Rocky Mountain PBS. It’s not the same as seeing it in person. It never could be. But it’s a proper bit of holiday cheer, to cozy up in my apartment in Brooklyn and watch other young girls move through the exact same steps that I once did.

I already know I’ll cry. I can feel the tears forming now. But mostly, I hope, I’ll feel something of the 8-year-old I once was spark in me: The glee, the fear, the pride; the sense that I was an important part of something special.

Maybe, for a moment, I can feel like that girl again, pushing through the stage door in my red cape and gloves; being happily terrorized by the older male ballerina who played the Mouse King; shyly accepting a hug from the Friendly Fairy; stepping, toes pointed and shoulders back, into the shimmering land onstage.

It lives in my head all the time — that place, with its bright lights and gilded set pieces and lines of sparkly tutus, the unseen audience beyond the footlights letting the thrill sweep over them. I’m there now, sitting in my living room with that plastic Christmas tree and the remnants of a recent snowfall past the window.

Dark times, outside, undoubtedly. But inside, it turns out, there’s still a bit of magic to be found.

I was an outsider at Christmas — until I found ‘The Nutcracker’