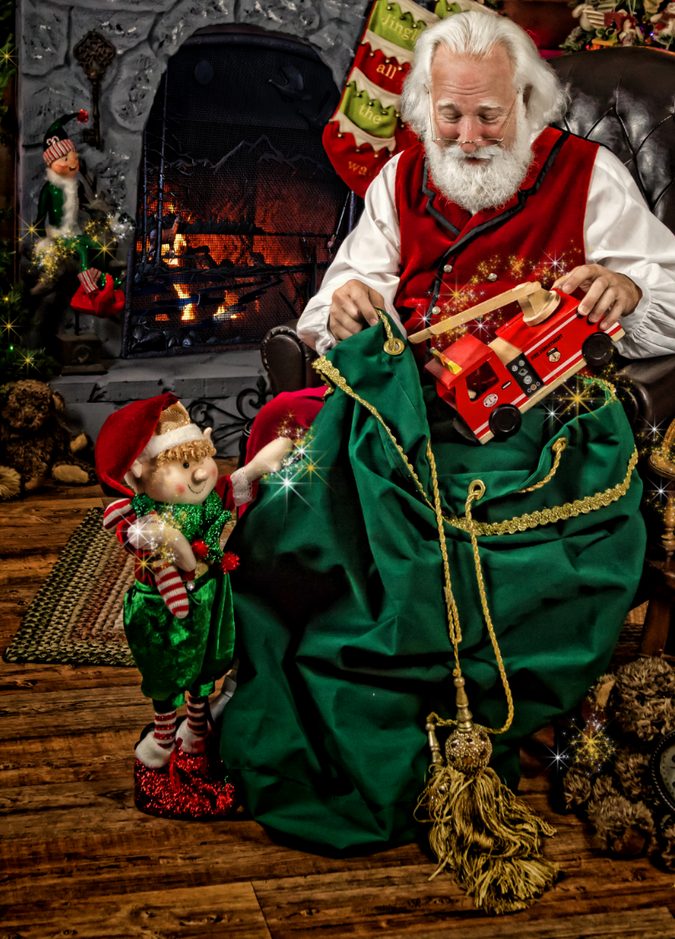 Before Santa Claus, there was Abraham Claus.

Abraham Claus — the forefather of all the Clauses — wore a $10 Santa coat with a round patch with Hebrew letters on his right sleeve bicep and a blue Star of David sewn on the back. He had snap-on peyos to complete the picture. This Semitic getup was the work of an Atlanta teen named Rick Rosenthal.

In the 1960s, he’d stop by the homes of his cheerleader friends and garland their trees with miniature bagels. It started as a joke and, decades later, became a calling.

“To me Christmas is about Santa,” Rick said, noting that the figure of Santa Claus is distinct from the historical Saint Nicholas. “For a non-Jew it may be about Jesus, but for me it was about Santa and getting a free candy cane — I was into the candy canes.” On being Santa and Jewish: “If you just keep it simple it’s really easy to be Santa — you’re not Jesus and you’re not Saint Nicholas.” Courtesy of Santa Rick Rosenthal

Santa Rick had a lot of gigs before he became the kosher dean of his own Santa school and entertainment agency. In between occasionally reprising the Christmastime role for friends with children, he owned cleaning businesses, worked for decades as an arbitrator for the Georgia State Bar and was once a national distributor for TASER (yes, that TASER — there’s a story and he’ll tell it if you let him).

“Santa’s a storyteller,” Santa Rick said in a phone call from his home in the Merry Hills neighborhood of Atlanta — it’s actually called that — a largely Orthodox area with street names like Reindeer Drive and Merry and Christmas Lane.

In some ways, the Santa life chose Rick, drawing him in during a time of personal grief. In 2011, his mother and father died within 18 days of each other and he grew out his beard during the mourning period. It came in very white and he still had it when he made a trip to Home Depot one day to see if the spring flowers had arrived.

“I was in the garden center and I heard this little voice go ‘Daaady! Daddy!’ Not quite like he was dying and not quite like ‘The Exorcist’ but somewhere in between,” Santa Rick said.

He turned around to see a boy of no more than six tugging on his father’s shirt and staring in his direction.

“I couldn’t have been mentally in a more distant space than I was, but I knew exactly what he was thinking,” Santa Rick said, “I walked over to him and I put my hand on my lips like Santa does to do the ‘shhh’ sound and I got right in his face and I said, ‘Don’t tell anyone you saw Santa buying tools for the elves in Home Depot.’”

Rick found a corner near the mortar and concrete and waited for this child to leave. He was afraid to be spotted leaving without elf tools or driving something as commonplace as a car with no reindeer power. It was a commitment to character that would soon become all-encompassing.

“As a result of that moment I realized this is what I need to do all the time,” Rick said. “People need Santa all the time and I have that look.”

Rick went pro, keeping his beard and eventually becoming the Santa for the Atlanta Braves and Atlanta Falcons. But after attending a few “Santa schools,” which teach men in red how to improvise and handle unpredictable tots, he decided the industry needed training that was more well-rounded and committed to craft.

In 2016, he and his wife, Tracy, opened the Northern Lights Santa Academy, the subject of the film “Santa School,”now streaming on Amazon. A yearly professional development program, Rick’s academy hosts guest instructors like lawyers to advise on Santa contracts and costumers to speak about Santa’s sartorial choices. One year, it even hosted a German-Jewish rocket scientist to explain how Santa could make all his trips in one day.

“It’s amazing how many Jews I get to teach in my school,” said Rick, noting that quite a few Santas out there are Jewish — though they’re mostly Reform.

Rick was raised Conservative and was nonaffiliated for 20 years before he became Orthodox in his 30s. He believes he is something of a rarity for his denomination in the world of Christmas performers. But the man who started his Santa Clausing as Abraham Claus sees no tension between his beliefs and his choice of career.

“As a Jew it’s easy to do because it tells us that we’re supposed to be a light unto the nation,” Rick said.

Santa, a nonjudgmental and, Rick claims, secular icon, fulfills this light-based mission by bringing people joy in a spirit of peace. To critics who cry chillul Hashem, he maintains it’s no different from a Jew selling toys for Christmas. Santa Rick, like the Santas he trains, dresses well, with a real leather belt and brass buckle. “To be Santa is expensive, you won’t get rich but you’ll make your money back,” Santa Rick said. “If you’re making money it’s cause you’re doing something wrong.” Courtesy of Santa Rick Rosenthal

When people learn Santa Rick’s Jewish, he says they often get “Zionistic.” Only once did he recall things taking an uncomfortable turn into theology. (A small child leapt on his lap and said “Happy birthday, Jesus,” leaving Rick, even with all his training, tongue-tied.)

It was a curveball, but Santa Rick and his academy prepare Santas for all contingencies. This holiday season, however, provided a major logistical hurdle for the industry: Just how are Santas supposed to hear wish lists during a pandemic?

“We realize that Santa could be the number one super-spreader in the world — not in Georgia, not in the United States but the world because Santa sees 30 to 2,000 people a day,” Santa Rick said. “Whether I’ve got COVID or not I could just be a carrier, like Typhoid Mary, I could spread it and wipe out the world.”

So, for Rick’s Santa service, the National Santa Agency, there is no sitting on the big guy’s lap this year — or even any touching. “No one breathes on our Santas,” Rick assured.

But how is business going? You’d be surprised.

Many malls ditched the tradition or had Santas separated from eager kids with a protective shield. Corporate events fell off, Rick said, but there was a late and unprecedented explosion of demand for private visits from Santas at people’s homes, conducted with proper social distancing. The Santas are also encouraged to wear masks except for photo ops, which, given their voluminous beards, look a bit silly.

“We told all our Santas to take off this year,” Santa Rick said. “For the most part they’re all at a minimum of two categories that are high risk. They’re mostly over 65, they’re mostly overweight and as a result of those two things many have high blood pressure, diabetes, heart problems, sleep disorders, lung disorders. They could have as many as seven immune compromised situations.”

Around 30-40% of the Santas at the agency didn’t show up to work, creating a Santa shortage as more people requested the jolly avatar of Christmas at the eleventh hour. Santa Rick, who doesn’t work — but does “appear” — on Shabbos, only did a handful of gigs in 2020; one involved handing out free cheesecake at a local eatery. In the meantime, he’s been busy on dispatch, sending out the Christmas performers on his agency’s call sheet and filling the sudden need in what many assumed would be a year without a Santa Claus.

The work is fulfilling, especially in a tough year like 2020.

“Santa really does do things to people that people don’t understand on a subconscious level,” said Santa Rick, “If you see the word ‘Santa’ written, you’ll just feel better. Even though you’re a Jewish boy, you’re gonna feel better.”