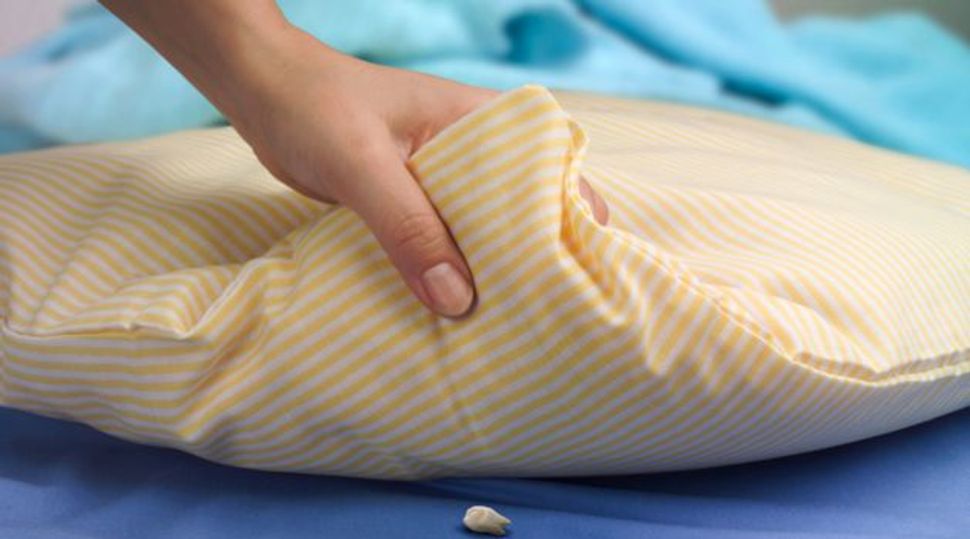 Until my kids starting loosing their teeth, I considered myself a Jew without any Christmas influences. Sure, I’ve always given and received Hanukkah gifts, which one could argue is the most blatant Christmas influence of all. But I’ve draw the line when it comes to buying Christmas-inspired blue tinsel, blue and white lights, and other Christmas decorations in Hanukkah disguise.

My husband and I teach our kids to respect Christmas and all the traditions of other faiths, but we’ve been careful to create their Jewish identities from the holidays and customs we do follow rather than what is not ours. Before those dang lost teeth, for example, I took pride in knowing we stress the significance of the story of Hanukkah without inflating the holiday’s importance. I was self-congratulatory about our sukkah and the fact that we celebrate Shavuot and all the holidays. I felt assured that Shabbat happens in our home every week, both on Fridays nights and on Saturdays. We were so full of positive Jewish action here that I assumed we had no trace of trappings of Christmas.

“Our Tooth Fairy is a lot like Santa Claus,” I recently heard my daughter, Rebecca, say to my oldest son, Sam, who at 9-years-old has stopped believing in the Tooth Fairy. We still leave him letters and money to keep up appearances for his siblings, and Sam has been a good sport about his end of the gig, penning notes about why he should get a later bedtime and a higher allowance or whatever grievance he’d like to negotiate with the powers that be.

“She’s not like Santa Claus,” I said, interrupting Sam and Rebecca’s conversation. “First of all, the Tooth Fairy is a woman. Second, she flies with wings, not reindeer.” Case closed, as far as I was concerned.

Rebecca wasn’t finished. “But you’re always telling us she knows if we’re naughty or nice.”

Sam nodded. Apparently he had received this message too.

I knew that I had been optimizing the Tooth Fairy to encourage the best behavior possible, but I had never intended to usurp the Santa Claus mythology, to borrow “naughty or nice,” to that end.

Sam ran to his room to find his pile of letters from the Tooth Fairy, intending to prove that the connection between Santa and the Tooth Fairy was strong. He handed me the letter he had received earlier in the school year.

I have not received a tooth from you in a long time. This is good news because since the last time you lost a tooth you improved your behavior at school and at home. Before you lose your next tooth, you should continue to decrease the amount of times you talk back to those you should respect. Also you should continue treating your sisters and your brother with the most consideration and kindness possible. Finally, I know both you and Rebecca want fairy dust. In recognition of Rebecca’s initial request, I will give you some to share after she looses her first tooth, assuming excellent behavior on both of your parts. Stay good and keep brushing and flossing! I’ll be watching. Love, The Tooth Fairy

Seeing all of the notes at once, all those times my husband and I wrote “I’ll be watching,” made me realize that Sam was right. Every letter emphasized the Tooth Fairy’s all-knowing powers. My kids associated this concept most with Santa Claus, a figure they knew from TV and from their Christian friends. But they also knew about Santa from me, because I’ve been careful to make sure they’re not the ones who ruin that magical story for their friends in our entirely non-Jewish neighborhood.

On the one hand, I was probably unknowingly trying to make up for Santa’s absence in our house by making the Tooth Fairy a feminine, winged, nearly invisible version of that generous, watchful saint from the North Pole. But I wonder if there’s a deeper element at play. Why wouldn’t my kids, the ones who go to shul every Saturday morning and live in a house so steeped in Jewish life, associate the concept of an all-knowing, watchful being with God? Not that I want them to make an idol out of the Tooth Fairy, but I would have rather Sam and Rebecca said, “Our Tooth Fairy is a lot like God” than “She’s like Santa Claus.”

I had to consider that despite my Jewish pride and active Jewish life, I had erred in giving God-like attributes to the Tooth Fairy and accidentally bringing Santa Claus into our home, not just during the Christmas season, but all year round. Nevertheless, I think it’s too late to change our Tooth Fairy’s persona now. And once our last child stops believing in the idea, I will miss her somewhat judgmental analysis of their behavior. They seem to have accepted her hard-to-reach standards and adjusted their actions accordingly at the first sensation of a wiggly tooth. Maybe.