To understand 2020, I looked to the art of the past 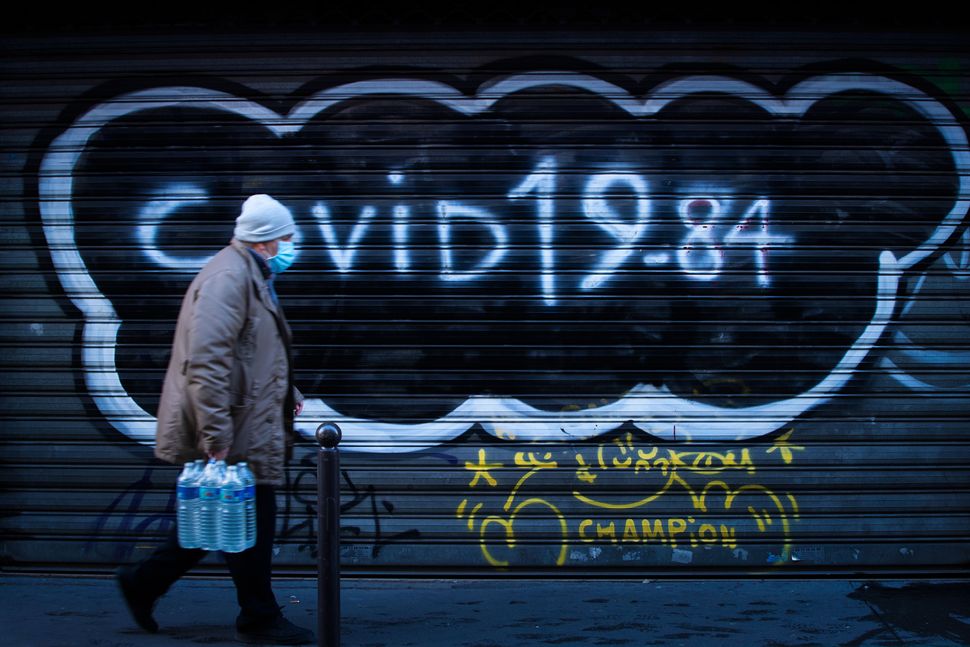 A masked pedestrian passes a gated shop storefront graffitied with the words “COVID 19-84.” By Getty/JOEL SAGET/Contributor

Good art — the sort that endures and evolves and speaks clearly to what it meant to be alive at a certain moment — is rarely of its exact time.

There is not yet any definitive work of the Trump presidency or the coronavirus pandemic. Critics and audiences are rightly suspicious of any artist who claims to crack these topics at this early stage (see the Covid love story “Songbird” or “The Comey Rule”). There’s such a thing as being too soon.

Thomas Flynn’s 9/11 epic poem, “Bikeman,” took seven years to render its “forever September morning.” Tolstoy took on the Napoleonic Wars two generations after Napoleon’s surrender. Debuting four years after the Vietnam War ended, “Apocalypse Now” has a misnomer for a title. While distance and a patina of context may later deem something prescient or valuable as a primary source, when we try to make broad sense of our time while still being in it, we have to look to the past. I’ve been doing it for nine months.

In early March, I took what would turn out to be my last elaborate outing. I attended the premiere of the HBO miniseries “The Plot Against America,” based on Philip Roth’s 2004 novel, which imagined the ascent of isolationist “America First” aviator Charles Lindbergh to the presidency. I was there as a journalist. Airing eight months before a pivotal election, it seemed sure to be the most urgent show of the season. Until it wasn’t. Just weeks later, the after-party’s Instagram photo op — a partial recreation of a 1940s living room — read as a cruel joke for a homebound society fretfully Googling the 1918 Spanish Flu. And yet, the book and the show still proved a useful point of reference for what was to come.

Show creators David Simon and Ed Burns changed Roth’s ending, wrapping up with an Election Day montage of voter suppression, purged rolls and buried ballots and rolling the credits after a radio broadcast announced “conflicting results” in the early returns. Though our election was secure, Trump’s legal challenges to swing states and open encouragement of voter fraud and intimidation were almost too on the nose.

“Is our electorate educated enough, or are our information systems so corrupted that we live in a post-truth moment?” Simon told me in an interview the day after the premiere. “I have real questions about whether or not the fuel you need to sustain a republic — which is accurate information and an educated electorate — are still available to us in proper numbers.”

We avoided the worst of the series’ fears, but realized the story’s late conspiracy theories, about a still-living Lindbergh baby in Nazi hands, with the rise of QAnon’s theology of a still-living JFK Jr. We even saw an attempted White House coup anticipated by both the show and the novel. That these plot points had some degree of accuracy speaks to the benefit of its historical filters — the 1940s, as channeled through 2004 and then 2020, through three years of Trump’s reliable disruption — while the art of our current constitutional crisis is still too fresh to capture the outgoing year in amber. This kind of retroactive insight was a trick Roth played often in his late career.

In 2010’s “Nemesis,” Roth imagined a fictional 1944 polio epidemic in Weequahic, Newark, probing an ancient prejudice that associates Jews with contagion. In April of 2020, we saw New York’s mayor upbraid the “Jewish community” for public gatherings held by a minority of Haredi Jews. Like the hapless hot-dog man in Roth’s novel, boycotted for serving the epidemic’s first victim, Asian Americans were hit with their own strain of bias, as many restaurateurs lost customers.

The character study of principled playground director Bucky Cantor now functions as a cautionary tale against traveling from a Covid hotspot when he relocates to the Poconos. His liberated, maiden dive into a sleepaway camp’s lake is the stuff of Anthony Fauci’s nightmares. Bucky’s guilt at being a probable Patient Zero matches the agony of many who unwittingly exposed loved ones to our current virus. His penance, and his tragedy, is a lonely life.

“Whatever I did, I did,” Bucky concludes decades later. “What I don’t have, I live without.” That last part may serve as a mantra for the monastic life so many of us have now adopted.

Ottessa Moshfegh’s “My Year of Rest and Relaxation” from 2018 evokes the sedentary days of its unnamed protagonist on the cusp of Sept. 11. Hers is a pre-Covid and pre-Netflix existence consisting of VCR abuse, self-prescribed antidepressants and steady unemployment. Wrangling with the novel now is too much — what we truly need is a distinction between dull waking life and our escapism, lest everything become the same.

Of course, this pandemic found me watching “Groundhog Day” (on Netflix Party, obviously). Never has that film held as much sway in the cultural conversation as in a world where time and all its festive or milestone markers have melted away. While the comedy’s conceptual heirs — “Happy Death Day,” “Edge of Tomorrow” and the pandemic-era “Palm Springs” — add their own gimmicks, the cynical Phil Connors’ endless February 2 in Punxsutawney carries an altruistic message of community welfare. It’s a needed corrective now and one that presents an upside to enforced routine and sacrifice for others.

As many an unhelpful tweet attested, “King Lear” was composed in a plague. It is also as heavy a rebuke of hasty, emotional governance as it is a denunciation of mistreating vulnerable elders. Its parable resonates, even as the Public Theatre’s “Richard II,” presented as an audio drama this July, was being dedicated to the Black Lives Matter movement.

I found the production stirring but, beyond its diverse cast, its connection to the racial justice movement strained. More timely was the imprisoned Richard’s soliloquy.

“I have been studying how I may compare This prison where I live unto the world: And for because the world is populous And here is not a creature but myself, I cannot do it; yet I’ll hammer it out.”

Works that form a sharper point of reference are distressingly evergreen.

Abel Meeropol’s anti-lynching song “Strange Fruit” became an anthem of the movement. Ryan Coogler’s “Fruitvale Station,” about the final hours of Oscar Grant, a 22-year-old Black man killed by a police officer, remains perhaps the strongest dramatized indictment of police brutality — not for showing a man’s death, but his life.

I reread Norman Mailer’s vexing “The White Negro: Superficial Reflections on the Hipster,” a source text for understanding white men’s fetishization of Black culture. I did so largely to revisit James Baldwin’s response, “The Black Boy Looks at the White Boy.”

Baldwin’s essay, written in 1961, some four years after “The White Negro,” demonstrates how Mailer was a problematic ally.

Baldwin implies that Mailer’s interest in power, like the subtitle of his essay, is superficial and the stuff of midlife crisis. It’s an effort less encompassing, and less knotty than the dynamic between Black people and white Jews indicated elsewhere by Baldwin, or by Jessica Krug’s protracted minstrel show.

In the 2000 novel “The Human Stain,” Philip Roth imagined a kind of inversion of Krug’s career in academia, pinpointing the different valences of cultural and assigned identity. Its protagonist, Coleman Silk, is a light-skinned Black professor, who pretends to be a white Jew to do away with “the whole ramified Negro thing” and its stifling expectations.

In the story of Silk, Roth suggests what Baldwin contended earlier: A Black man making his way in the world must do so by self-invention, making a space for himself where there is none. Flipping the script on Mailer’s attempts to be “hip” and Black adjacent, Silk knows it is to his benefit to present as someone like Mailer. For Silk, being white is not about being white, but being a racial blank — a default — free to “take the future into his own hands rather than to leave it to an unenlightened society to determine his fate.”

Decades later, Roth is in conversation with Baldwin and Mailer, and, most importantly, us. The dialogue never ends, returning, like Mailer’s beloved jazz, to the theme. The urgent topics of our time take their time. They have no definitive artifacts, only ones that reveal new dimensions and achieve more with age.

The discourse itself is a kind of “Groundhog Day,” accumulating meaning before new questions are posed. We don’t yet have answers, but at least we don’t wake up every morning to “I Got You Babe.”

PJ Grisar is the Forward’s culture reporter. he can be reached at Grisar@Forward.com.

To understand 2020, I looked to the art of the past