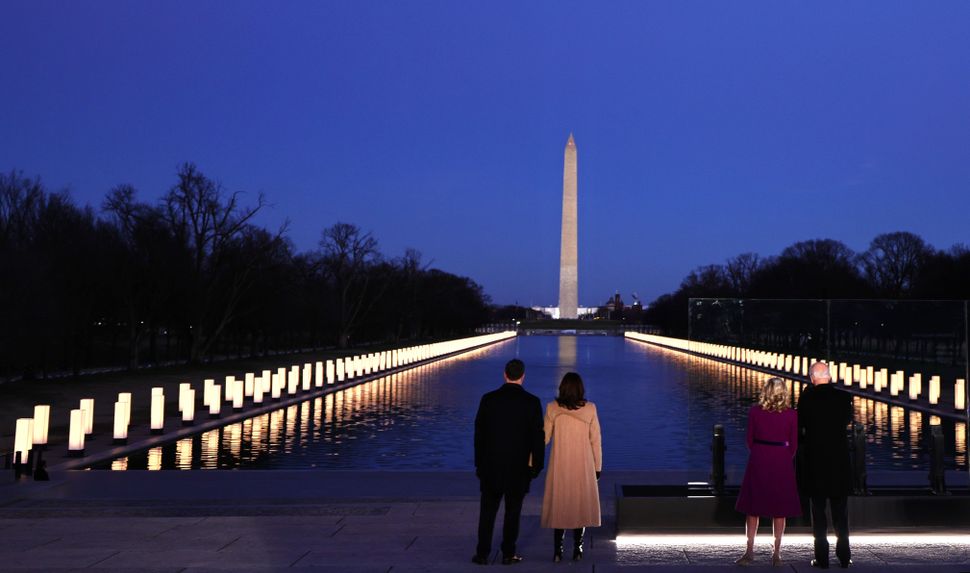 Another state occasion, another misuse of Leonard Cohen’s “Hallelujah.” Across the internet, fans of the poet are pleading: Stop the madness!

On Jan. 19, 2021, before the reflecting pool by the Lincoln Memorial, gospel singer Yolanda Adams concluded a somber memorial to the over 400,000 Americans dead of Covid-19 with Cohen’s storied song of sex and spiritual ambivalence alongside President-elect Biden and Vice President-elect Kamala Harris. While many found it moving, many, many others questioned the needle drop.

Yes, Christians, all Jewish people make fun of you when you sing the song about Jewish sex to celebrate your holidays and commemorate your lost.

Now how does it feel to be on the outside?!

Wait why are they singing Hallelujah at the COVID memorial? Y’all. Stop. Just … stop.

It hasn’t even been six months since two versions of Cohen’s ballad (both unauthorized) played on the National Mall; “Hallelujah” ended the Republican National Convention in August.

Then, as now, people wondered if people actually ever listened through the song beyond its refrain of ostensible praise to the almighty. Some compared this pervasive misunderstanding to “Born in the USA,” Bruce Springsteen’s little understood — but patently obvious — indictment of the American military’s recruiting tactics.

Hallelujah is the left-ish version of Born in the USA. Has *anyone* actually listened to the whole song?

Which song is more misunderstood?

Now, the reasons why some found the song inappropriate for a memorial for the dead are strictly not safe for work. But how Cohen’s deeply sexual — and profoundly Jewish — hymn to a failed relationship was stripped of its meaning is pretty easy to source back to a tragic cover by Jeff Buckley, who died after recording the song. That track assumed its own legendary meaning.

It has since been covered, using Buckley’s sparer arrangement, by countless artists and every busker in every city in the world. Church services have even been known to use these incredibly cringey and Christ-centric alternate lyrics.

On Tuesday, Adams, who sang only two verses of the song, chose to slightly alter the lyrics, traditionally suffused with doubt and uncertainty, for a more hopeful message.

“I know that there’s a God above,” Adams sang, before moving on to the usual lines about a mismatched romance. She ended with the typical final words, “It’s not a cry that you hear at night/It’s not somebody who has seen the Light/It’s a cold and it’s a broken Hallelujah.”

When you take away all the stuff about David, Bathsheba and their adulterous escapades and Cohen’s own searching, it does kinda work as a desperate, exasperated interjection. The cold and broken Hallelujah is for a wearied United States on the eve of the inauguration, hoping for change.

But as Biden prepared to be sworn in, another musical scandal arose. Creedence Clearwater’s “Fortunate Son” played as Trump left the White House. John Fogerty, who issued a cease and desist over the use of his song at Trump rallies, has stated in no uncertain terms that Trump is exactly the sort of fortunate son the song and its speaker condemns.

They’re playing “Fortunate Son” as Trump leaves DC. A song critical of privileged white kids who dodged the Vietnam draft. Does he really not understand the irony?

Biden apparently has a full docket for his first days in office. Hopefully a lyrical literacy initiative — maybe from songwriter Secretary of State Tony Blinken — crosses his desk.