Why Trump has to stop playing ‘God Bless America’ and ‘Hallelujah’ 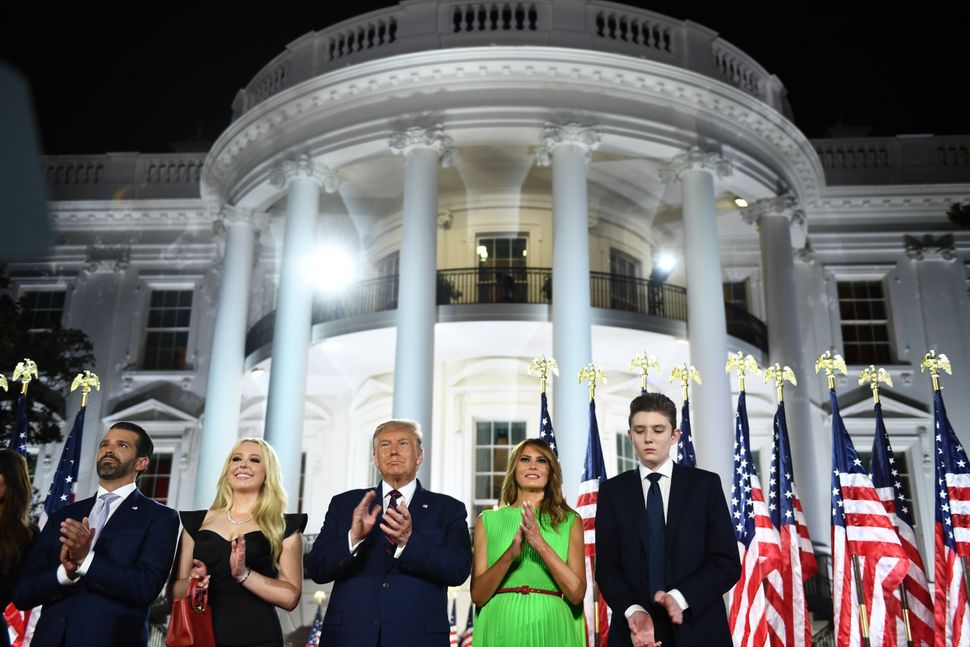 Leonard Cohen died, poetically enough, the day before early returns ushered in the era of Trump in America.

That meant the lifelong Canadian national, who made his home in Los Angeles, was spared the Trump presidency. He didn’t have to endure Kate McKinnon’s cloyingly despairing rendition of his song “Hallelujah” performed in character as Hillary Clinton. And he was not around, last night, to see the Republican National Convention close with Tori Kelly’s cover of “Hallelujah” played as part of a display of rocket red fireworks spelling out the name “Trump.”

The RNC ends with fireworks blazing “Trump” in the sky and a cover of Leonard Cohen’s “Hallelujah” blaring. pic.twitter.com/OMtJRpTMaK

People are rightly mad about what they view as posthumous abuse of the songwriter and poet. Legions on Twitter have indicated the irony of Trump feigning piety by using a song about seeing the sacred in the mundane. Clearly — if perhaps appropriately — he missed that the song is about a failed relationship that couldn’t be saved. But really, what does everyone expect from a president who probably discovered the tune while watching “Shrek?”

Unsurprisingly, the Cohen estate refused the RNC’s request to use the song and is now looking into its legal options.

Receiving less attention than Cohen’s anthem is another pull from the Trump songbook, which has given us such dubious choices as “Memory” from “Cats” and “Edelweiss” from “The Sound of Music.” Before the evening ended, Long Island tenor Christopher Macchio reprised the Kelly recording of “Hallelujah.” And, more prosaically, he sang “God Bless America.”

“God Bless America” is as much an American standard as “America The Beautiful” and gives our national anthem a run for its money, splitting the billing with “Star Spangled Banner” at most American baseball games since the aftermath of September 11. Any typical president should feel free to use it. Trump is not a typical president, and he shouldn’t.

Like so many great American songs, “God Bless America” was written by Irving Berlin. Berlin was born Israel Beilin in a shtetl in the Russian Empire in 1888. At the age of 5, Berlin came to the United States as a refugee from religious persecution — an exceedingly hard ask in the current administration. The family had no money. His father was not a neurosurgeon or a banker or a member of the professions we now prioritize. He was a provincial cantor and a shochet, or ritual slaughterer. When Trump talks about “shithole countries” the Pale of Settlement of Berlin’s birth is probably close to what he’s envisioning, albeit with more white faces.

That said, Berlin’s “God Bless America” is by no means the exclusive property of those pushing for an overhaul of our asylum system. Through its history it has been used by liberal unionists and civil rights leaders — and even smeared by antisemites for its writer’s roots. But its reputation changed in the post-war period with Woody Guthrie’s equitable reimagining from the left, “This Land is Your Land.” While Guthrie offered a critique, conservatives boosted Berlin’s songs ostensibly simple American Exceptionalism.

On their surface the lyrics are certainly possessive and egoistic with “I” and “My” being the salient pronouns. They’re gauzy and idyllic and suggest a sweeping, cinematic pan of prairie and plain. The song doesn’t invite others to join in the speaker’s “home sweet home” — though other Berlin songs do. But the words and music are still an affirmation of an immigrant’s right to his adopted homeland and, in their way, a stark rejection of Trump’s oft-dog-whistled canard of Jewish dual loyalty.

Berlin wrote the song as a newly-naturalized American serving on an Army camp in 1918 (the proper year of the Spanish Flu epidemic, Mr. President). Originally written for a revue, it idled in the composer’s drawer until 1938, on the eve of World War II, when Kate Smith sang it for an Armistice Day radio performance, enshrining it forever in the American Songbook.

After Smith sang it, it was performed at a dinner held by the National Conference of Christians and Jews in late November 1938, where faith leaders denounced the “doctrine of race and hate.” The New York Times claimed the “hymn” was written specifically for the occasion. While we know this now to be false, the fact that Berlin may have thought to present it as such spoke volumes.

Berlin was rewriting the lyrics for Smith’s version in the direct aftermath of Kristallnacht. According to Sheryl Kaskowitz’s “God Bless America: The Surprising History of an Iconic Song,” this alignment had no small effect on Berlin’s changes, which altered “from the right” to “through the night” and a shifted away from isolationist sentiment by tweaking the original line “Let us all be grateful that we’re far from there” to “Let us all be grateful for a land so fair.” (The “land so fair” line is no longer widely used as it’s a part of a first verse that is pegged to wartime.)

Far from an anodyne anthem, the song was regularly linked to a plea for tolerance and pluralism against a rising tide of fascism, even before its ubiquity after America’s entry into World War II. And it didn’t only warn of hate from abroad. Soon after its debut, “God Bless America” appended a speech by first lady Eleanor Roosevelt, where she warned of the existential threat to the country “arising from intolerance and injustice” within our borders.

When the song appeared on Thursday, it was punctuating wholly different remarks. Listening to the president, the threat to our country was not intolerance or injustice but “rioters and looters, or as the Democrats would call them, peaceful protesters.” It was “a socialist agenda to demolish our cherished destiny.” Racism and bigotry and the no consequence police killings of unarmed Black men and women were small fry compared to boogeyman Biden and his planned “shutdown of the entire country” and the “violence and danger in the streets of many Democrat-run cities throughout America.”

For those who have no historical curiosity, there would appear to be no dissonance in Trump’s vision for America — one that can easily be reduced to geography and the heartland — and what Berlin wrote. It’s a vision that, as surtext, suggests that everything is going fine and nothing need change, and so a good piece for a reelection bid. But its use here marks something apocalyptic, the ugly culmination of a trend of exclusionary white conservative co-opting decades in the works.

Until this jingoism and fear mongering is set aside, the song should be retired for this administration, just as Kate Smith’s rendition was canned from Yankee Stadium after her racist recordings were revealed. That move reinforced that the song is greater than any one person — it’s for anyone but the man who would curb the American dream that made it possible.

We can all say “Hallelujah” when that meaning is restored.

Why Trump has to stop playing ‘God Bless America’ and ‘Hallelujah’