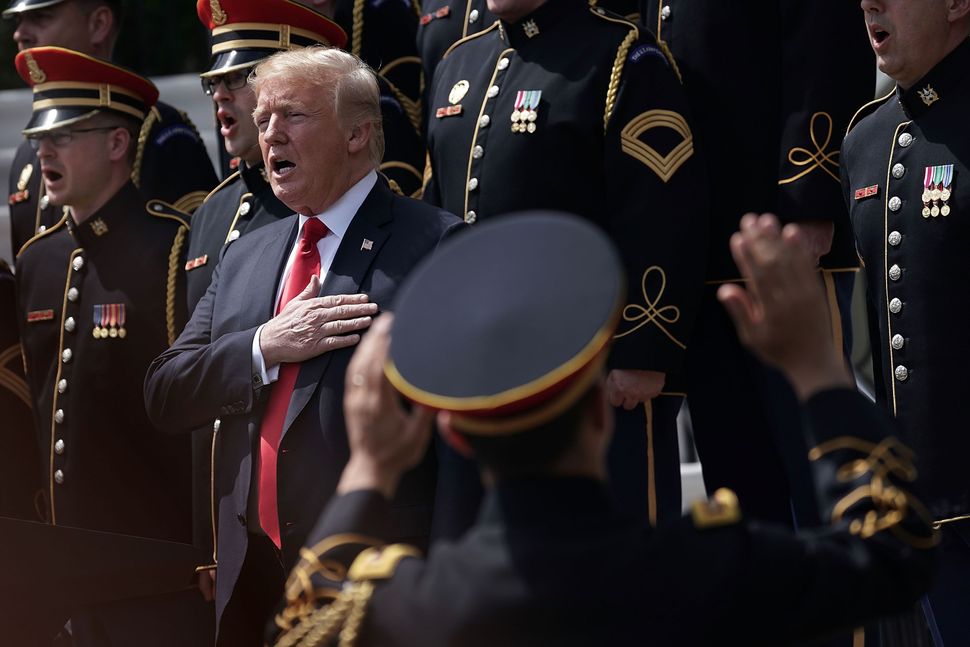 I can recite most words of Birkat Hamazon, a Hebrew blessing can take up to eight minutes to complete, but I can’t sing a single verse of “God Bless America.” Neither can President Donald Trump, apparently, who was caught on tape fumbling the lyrics at his “Celebrate America” event on Tuesday.

I feel fine about my patriotism, despite never having memorized Irving Berlin’s World War I-era ode to our nation. The President could too, but for the fact that he was only singing the Berlin classic because he was at a party he threw himself to demonstrate his fealty to America’s patriotic songbook.

You can watch the President, who bragged that the event would honor America so loudly the music would be audible “in the locker rooms” (a diss to athletes who have sat out the national anthem,) stumble through “God Bless America” below. A close look shows that he stumbles on the third line, stays silent, gives a robust deliver just on the word “prairies,” goes back to silence, and returns with unearned confidence on the final chorus. One only wonders what Berlin, who was born Israel Beilin and fled Eastern Europe for America due to anti-Semitic violence, would say.

Besides countless other accolades, Berlin was awarded medals by three US presidents for his contribution to American patriotic music: Truman, Eisenhower, and Ford. In the paraphrased words of another of his famous ditties, “anything you can do, [an immigrant] can do better.”